It doesn’t take long for me to get back into the swing of (some) things. I’m already working on trains again. This time, it’s the locomotive from which I caught the train chasing bug.

I got a call from Don on Saturday, wanting the tapes I shot for 6060’s trip out to Jasper last year. We chatted briefly, then mentioned that I should drop by the roundhouse at CP’s Alyth Yard to see 2816 all steamed up. Asking if the engine were heading back to Vancouver for a six-month inspection or more work, Don replied that 2816 was making a run from Calgary to Banff and back with some of CP’s executives. I was to drop by around 11:00am on Sunday.

When I arrived, Don’s truck was nowhere in sight. Having never been here before, and coming at Don’s invitation — not CP’s — I was careful to wait for my escort. Don arrived shortly afterwards, and I followed him in.

2816 was not out in the yard, or even on the turntable (as I’d hoped). It was tucked inside, the smokebox cover completely removed, the superheater covers removed, and four men milling around inside. Present were Bill (2816’s lead engineer), Jim (CP employee, RMRS member, and steam locomotive engineer — Jim had run 6060 to Jasper with us last year), Al Broadfoot (who supervised 2816’s overhaul), and another man who I’d never met before.

It seemed that the night before, after Don had left, Bill noticed an odd noise in the smokebox. Upon investigation, he found steam eminating from one of the flue tubes. That could mean only one thing — a superheater had burst.

We had arrived to find them in the midst of removing superheater tubes. Luckily, they knew exactly which one was giving them trouble, but it was tucked behind a couple of other tubes that needed to be removed first. This involved using an overhead crane for support, and a forklift for leverage. Superheater tubes, especially in larger locomotives, are extremely heavy. Removing them by hand is torture (or so I’m told by the 6060 crew, who had to do just that). 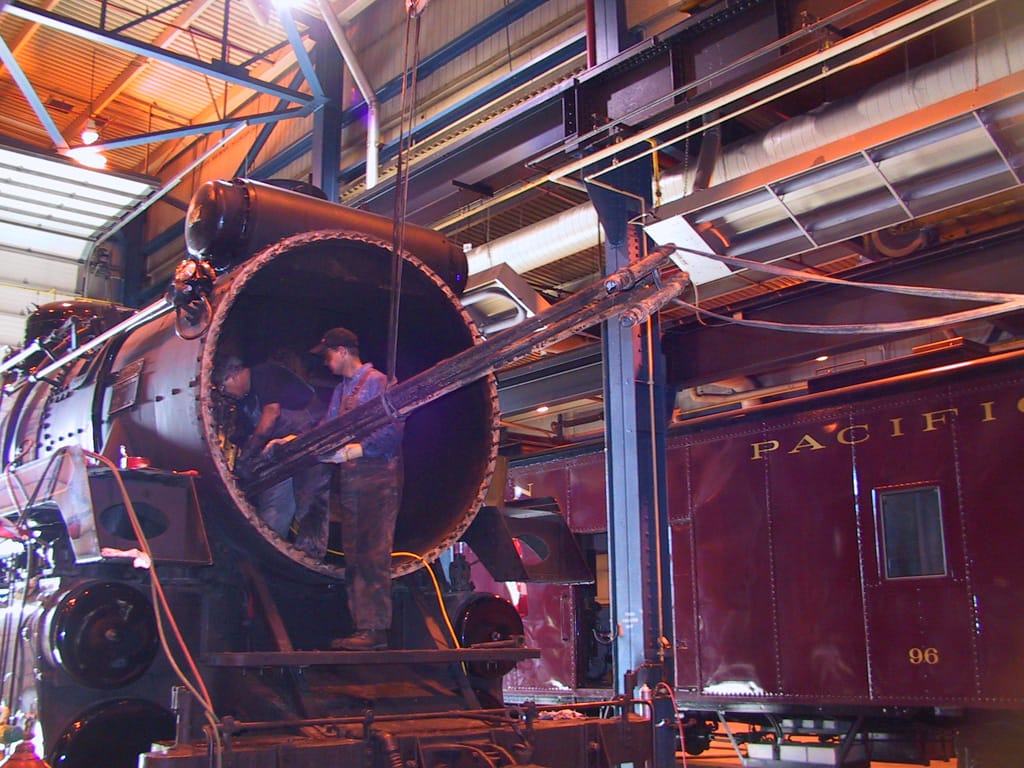 I didn’t directly participate. Partly because Bill and Al don’t know me, but also because I have no idea what I’m doing. I’ve never seen this done before, let alone participated. I fell into my role of gopher. (Which I’m quite comfortable at, especially with people who know a lot more than I do.) That basically meant a coffee run.)

While all this was happening, I had long chats with Al. It would appear that my education of Al has been woefully one-sided. I’ve heard lots of stories and some generally not nice things about him. I’d always been a little skeptical ... but not enough. Al seems to be a genuinely honest man, trying to keep locomotives in good running shape. This is what I gathered talking to him directly. He actually mourned the RMRS’ lack of a proper shop to maintain 6060. (This is something everyone agrees with.) Needless to say, if for nothing else, I’m glad I went just so I could talk with Al.

The troubled superheater soon slid out of the boiler. As it popped out and was slowly lowered to the ground, water seeped from the bend. Etched in the forged piece was a tiny hole, about 1/16th of an inch across. Possibly a thin-walled area, aggravated by a grape (a weld that has pooled into a sphere on the inside) causing an eddy, bored right through the side. 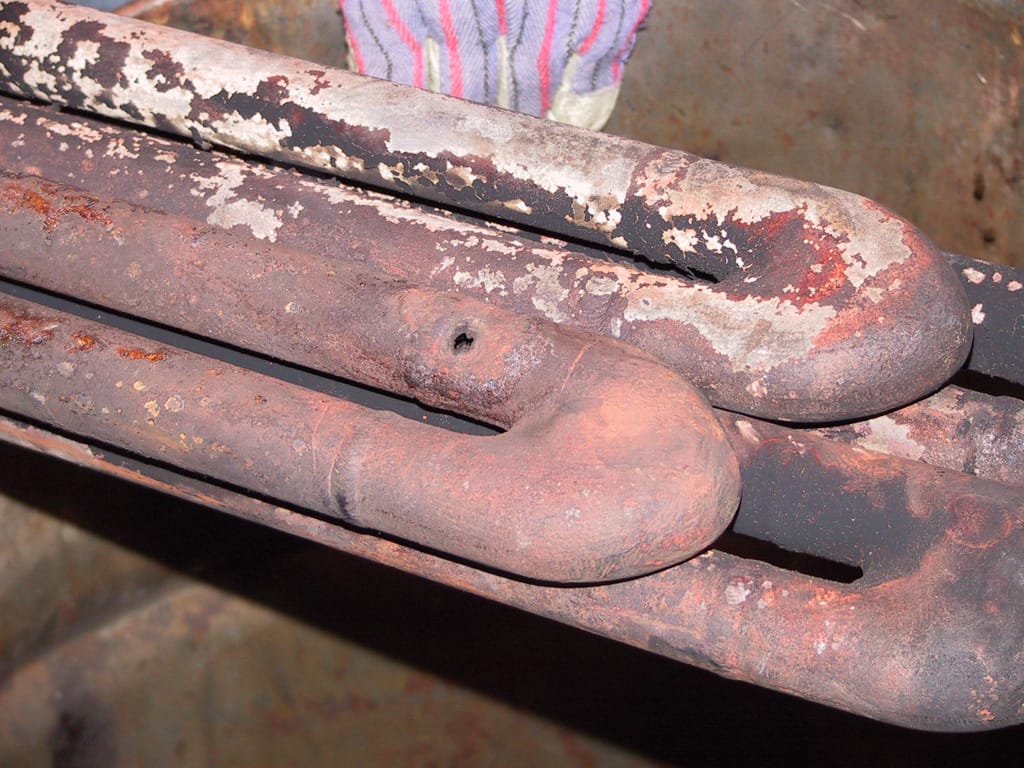 Normally, this would sideline a locomotive. But with CP’s resources, it’s a matter of cutting off the offending piece and getting in a welder to attach a new bend. Jim knew a good one in town who could come the following day to fix it. 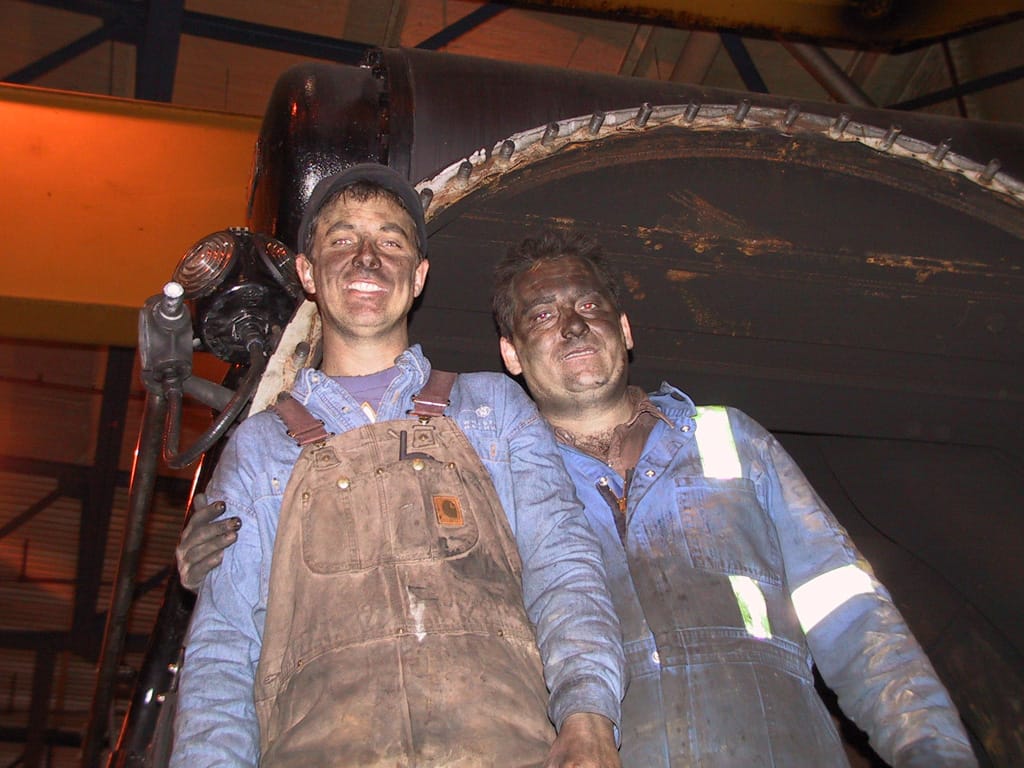 We left 2816 in the roundhouse, covers off, superheaters laid out, awaiting repairs. It almost looked like a patient anxiously awaiting a dentist to fill a cavity. It’s due to run to Banff (Bamf!) on Friday. I’m pretty sure it will.