I hate alarms. Especially when they go off while you’ve still got an hour of darkness left of the night. I had an early flight to Toronto, though, and wasn’t keen on missing it.

I had packed the night before, so all I had to do was shave, shower, dress, and throw all my bags in the trunk of my rented car. Checking out was trivial, just the way I like it. Then it was off to the airport.

Now here’s where either my unbelievably good sense of direction, or my unbelievable stupidity, shows through. Most normal people would ask where the airport is and how to get there. Not me. I decided I could find it based on the solitary sign I’d seen on the Highway 102/103 interchange yesterday. Oh, I should mention that it was still dark when I entered the highway, and the radio was calling for dense patches of fog ... about 10 seconds before I ran into one myself.

So I drove north. I wasn’t sure if I was even going to the correct airport. (I didn’t know how many airports were in the Halifax area.) For a short time, I considered turning off to get directions. But something kept me going. I found my way to the airport, though. The correct one, at that!

One of these days, this behaviour is going to get me into trouble. Big trouble.

Checking in was fast, as was picking up the seafood feast I was bringing back to Ontario. Five lobster, two pounds of mussels, and a pound of scallops. And so help me, none of it cooked in butter. (Not counting sautéing the onions and garlic for the white wine sauce.) The box the seafood came in, however, needed to be taken on the plane. Along with my two carry-on bags. This was over my limit, and a bit of worry. Luckily, the plane was only about three-quarters full. The staff didn’t stop me. 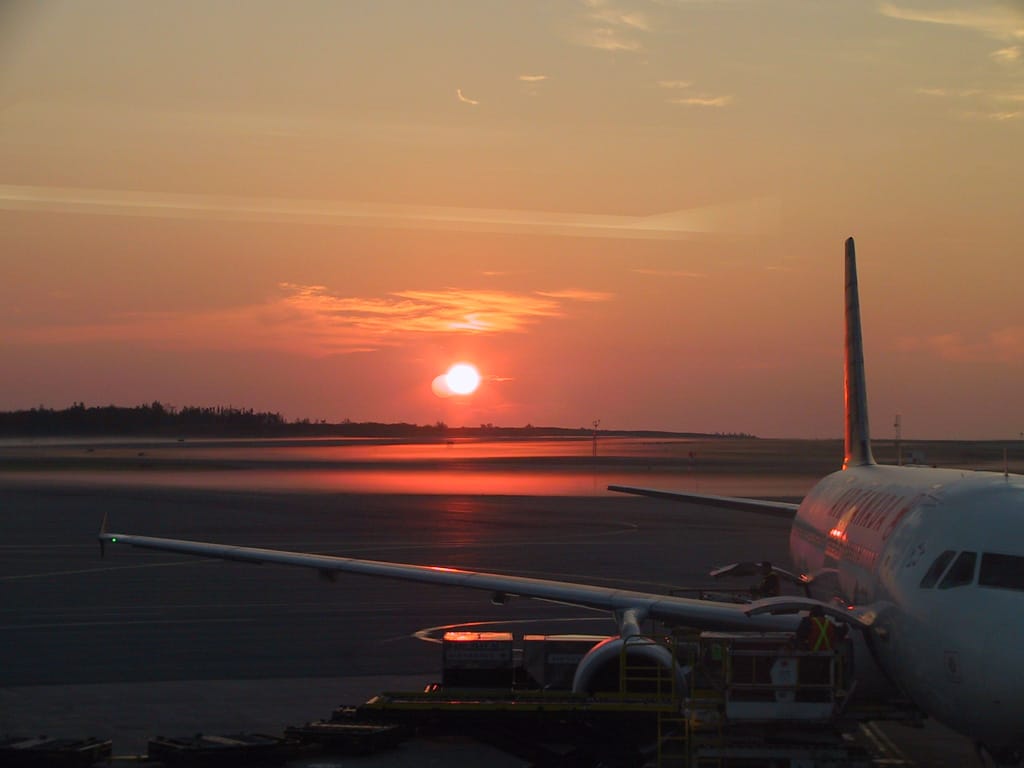 Toronto came quickly, and I was soon waiting in the baggage claim with my three carry-ons. My duffle bag was the first bag off. My knapsack was significantly later. As I exited baggage claim, my mother came in the main doors. Five minutes later mom, Cathy, and I were on our way north.

I was goaded into coming back to Ontario for Thanksgiving. I wanted to go home to Calgary. I’ve been away for a month and a half, and I want adjustment time. But somewhere in the back of my mind, staying for a couple of days in Huntsville seemed like a good idea. I gave into pressure and decided to come in. However, I’ll probably only see the airport, the highway, and the cottage. I doubt I’ll see anything else, or anyone else.

The ride north was uneventful, save for the Teeming Thousands who were similarly heading north. The traffic, according to Cathy, wasn’t too bad though. On long weekends during the summer, you simply just don’t go up on Saturday’s. It’s just shy of declaring insanity. When we hit the Highway 69/Highway 11 split, the traffic lightened. The rest of the trip wasn’t so bad.

At Orillia, I convinced Cathy that we needed to stop for lunch. I hadn’t eaten a thing since leaving Halifax, and it was now 3:00pm according to my stomach. This meant, of course, a stop at Weber’s — an institution in this part of Ontario. Virtually everyone who’s driven this stretch of highway more than once has eaten at Weber’s. And for good reason: it’s fast, fresh, and good.

We were in Huntsville about an hour later. After a quick stop for beer (I’m a picky drinker), we made the long trek out to the cottage. It’s a bit of a hike — a lot longer than I remembered from my last journey out here. But the cottage was as I remembered it. The outside, anyway. Cathy and Craig (mostly Craig) have put in a huge amount of renovation. It’s not done yet, but one day it’s going to be the smartest-looking small cabin on Lake Vernon.

Craig was already there, having been doing yard work for most of the day. Bear and Kylie (both dogs) raced out of the woods to greet us. Within minutes of being inside, I started to feel a little more relaxed. I still wanted to go home to Calgary, though. I guess all this travel has just left me feeling a little tired.

The renovations were awesome. The kitchen was totally different, the floor all tiled, and the bathroom looked almost totally new. (Well,it practically is.) Still, some work was still needed, including the walls of the living room and dining room, and the downstairs. But one thing at a time.

Lobsters: about 10 minutes. Mussels: about 7 minutes. Scallops: about two minutes. Time to eat it all: about an hour and a half. But worth it, if for no other reason than it cleared out the memory of the scallops I had in Lunenburg. We had no room for dessert.

The fun continued after dinner as we resumed making fun of each other. I didn’t participate as much, being quite tired from everything (and the alcohol not helping much). It was a good time, but I didn’t really feel all that relaxed. I still wanted to go home. Maybe tomorrow, I won’t feel so uptight.