One of these days, I’m going to remember to stop booking things at the last minute. I wanted to go to Lunenburg. I wasn’t about to take a taxi – it’s a little far for that. A car was the only real solution I could think of. But finding a car wasn’t easy. Especially on the Friday of the Thanksgiving long weekend. I ended up with a compact car from Budget. Not the best deal, but it was a car.

My first stop, however, wasn’t Lunenburg. It was Point Pleasant, at the tip of the Halifax peninsula. My goal was to find an anchor. According to the story I’d heard, it was an anchor from one of the ships destroyed in the Halifax explosion. The anchor, supposedly, had been thrown the three-odd miles to land in the park. I never found that anchor (it might just be a story), but there is an anchor from one of Canada’s long-decommissioned aircraft carriers.

The park is also full of Halifax history, from the old battlements used during the 1700s to the rotting dugouts from WWII. One of the oddest things to see is Prince of Wales Tower. It’s not a tower per se (it looms more than it towers), and doesn’t even come close to meeting the surrounding tree height. It’s a squat little erection that looks almost like a giant’s footstool. Once upon a time, it had been support for the other British battlements around the Halifax harbour. It later became a depot magazine, which ironically is what saved the tower from being torn down.

Leaving Halifax was a bit of a challenge. Although it was during the day, the traffic was such that movement was slow. Interestingly enough, a local CBC reporter tried to get my input on the problem while I was stopped at a light. She was quite frustrated to learn I was only a tourist. (I got the feeling she was having trouble getting the input she needed.)

Soon I was on the highway heading south. I had no real idea of where I was going. I only knew that Lunenburg was about an hour south of Halifax. Luckily, there’s an invention called a road sign that readily provides information for drivers too stupid (or cheap) to buy a map.

I ended up passing through Mahone Bay. This time, I took the road out of town that we’d avoided. A little over 10 kilometres down the road, the houses of historic Lunenburg soon lined the streets.

Downtown Lunenburg is a UNESCO World Heritage Site. The houses are kept in immaculate (original) condition, as are the museums and restaurants. There’s even a Subway restaurant that you’d miss if you weren’t looking. The ships sitting in the harbour, including the Bluenose II, only accent the feeling.

My first stop was for lunch. Having yet again skipped breakfast, I needed to eat. I stopped at a place Daryl had recommended a while back. Although it looked like a good establishment, I was extremely disappointed with the meal. I’m sure that somewhere, someone likes vegetables boiled in butter. My stomach was flip-flopping the rest of the day.

I visited the Fisheries Museum next. Built into what was probably a canning plant from the heyday of Lunenburg fishing, you’d almost never know what you were looking at, were it not for the signs. It’s a quaint little place that shows what it was like to fish on the east coast, equipment and all.

On the waterfront are a pair of boats owned by the museum. One is the Cape Sable, a retired fishing vessel. I’ve seen "The Perfect Storm", so I thought I had an idea of what a fishing ship looked like. But there is a certain reality when you look at the tiny compartments that these men lived in. The Captain’s room, though large, was little different than those of the other officers. The bed was the same as everyone else’s. The interior was almost enough to kill off any thoughts of ever living a life on the ocean.

I held off seeing the best until the end – the Bluenose II. I remember little of the Bluenose. The last time I saw the ship, I was eight years old in Halifax. Although sealed for the winter, you could still make out the distinctive hull, the masts, and getting right up next to the ship, you could see the deck and its contents without trouble. But I would not board the Bluenose this visit. That will have to wait until my return to Nova Scotia. 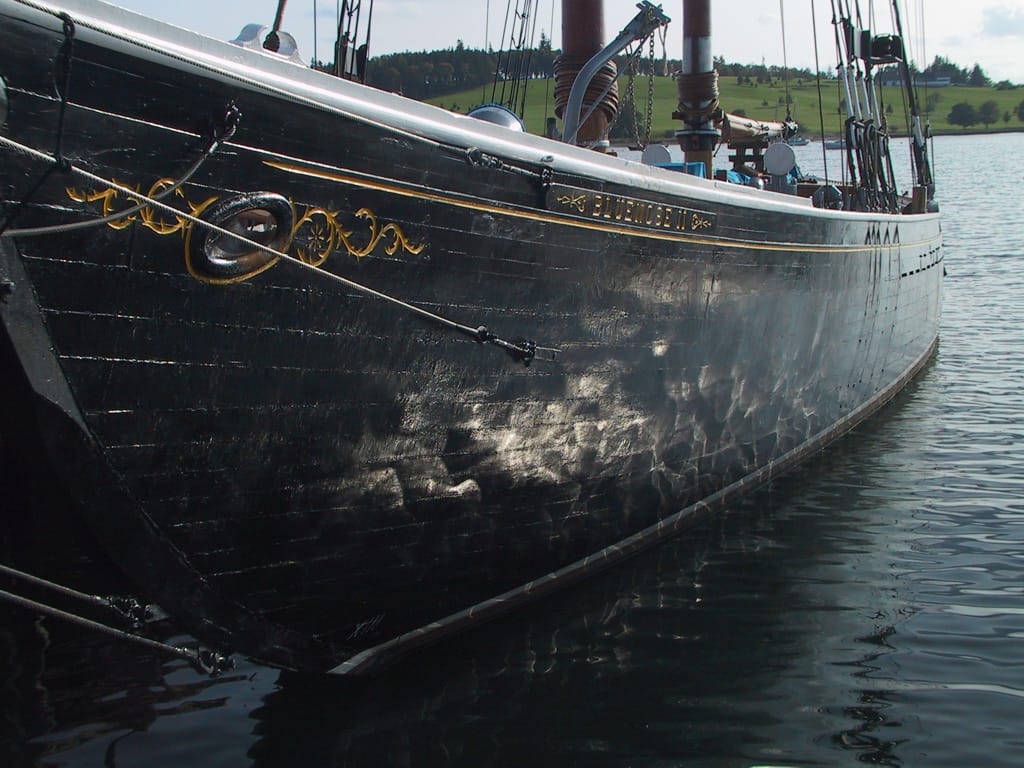 Before heading back towards Halifax, I rounded the bay so I could get a picture of Lunenburg with the town glowing in the sunlight. I was not disappointed, though I would have liked to have been a little higher up. You get what you can.

My next stop was Peggy’s Cove. I know what you’re thinking: Hadn’t I already visited there? I had, but an idea crossed my mind that drew me back. One of the signs in the post office in the Peggy’s Cove lighthouse said that letters posted in either the lighthouse or the mailbox next to the gift shop would receive the Peggy’s Cove cancellation. At the time, it hadn’t really sunk in. The idea of sending a postcard to friends and family from Peggy’s Cove really appealed to me, and was the sole reason I went back. 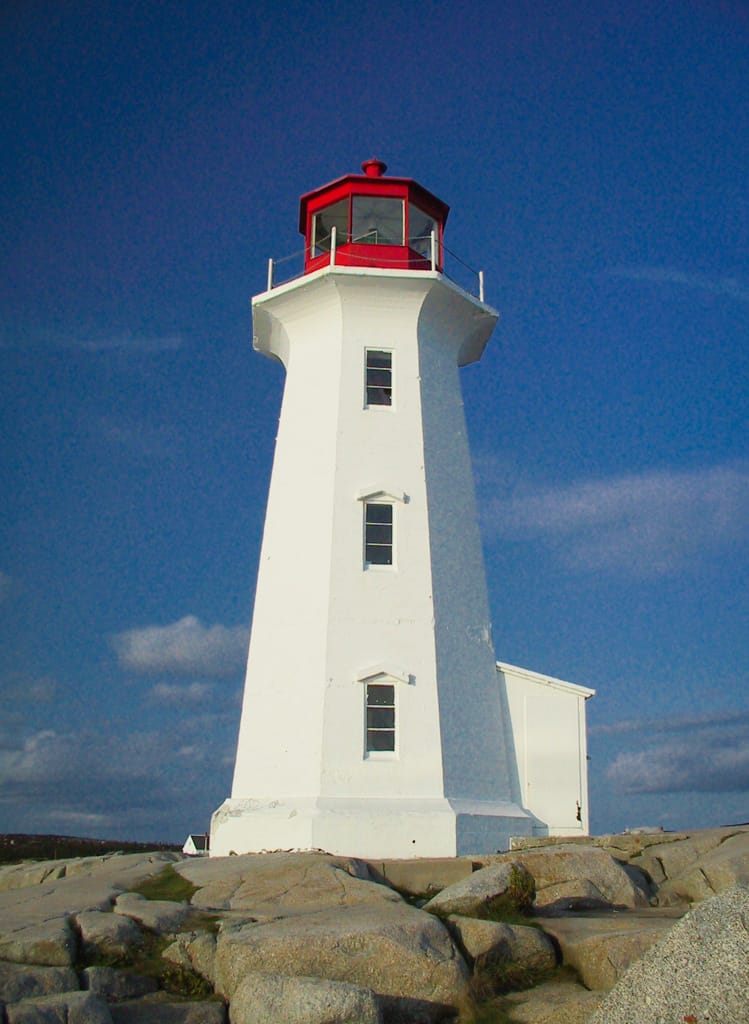 The good weather was welcome, though. As much as I like the pictures I took a week ago, the setting sun provided some wonderful angles and bright light, backing onto the blue sky. Even black and white pictures looked better. 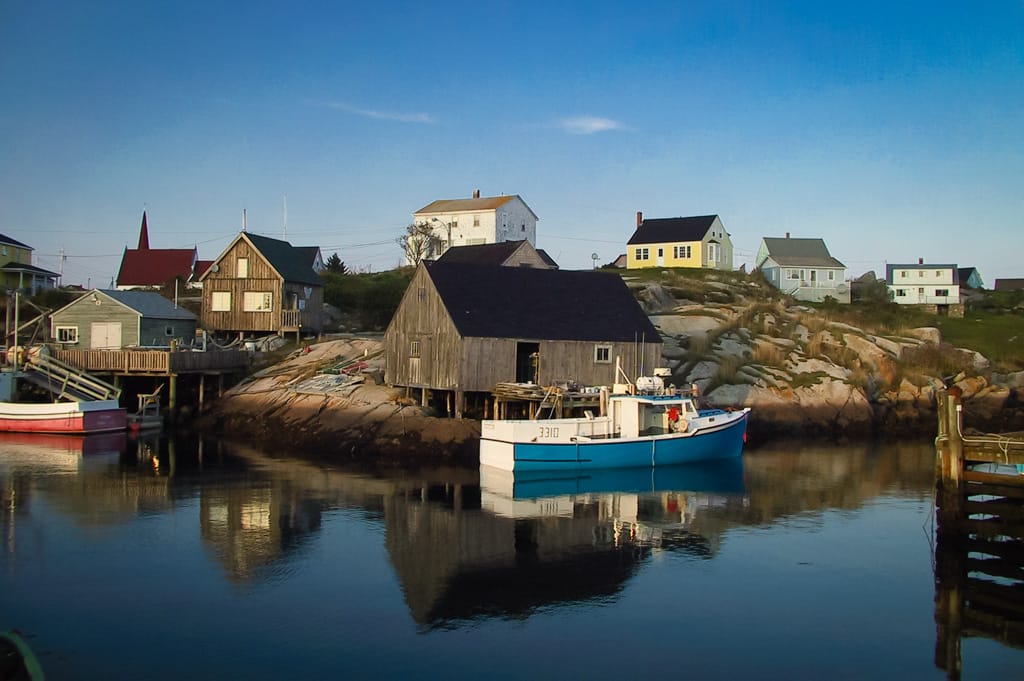 Returning to Halifax along Highway 333, I found my way directly to my hotel. I ditched the car in favour of walking downtown for dinner. Still trying to ditch the icky feeling from lunch, I opted for the cleanest food I know and love: sushi, at Hamachi House. A little green tea, a little tempura, and couple rolls of some of the freshest fish I’ve ever had.

I sat at the sushi bar. The restaurant was quite full, with people all around the bar. But no-one I knew. I’ve gotten used to eating in restaurants on my own, but it doesn’t ease the loneliness. After being with people for the last month, travelling on my own left me feeling a little more empty than I like.

Tomorrow, I begin my long journey home. That’s pretty much what’s keeping me going right now. I’m tired. Tired of the waiting, the pacing, the walking, the seeing, the doing. I never thought I’d hear myself say this, but I want to go back to a job that drives me crazy – at least it’s predictable.