Sleeping in is good. Too bad I didn’t sleep in. Instead, I woke around 8:30 and began to get on with the day. The first order of business was typing out some of the journal entries I was behind on. The second was making the CD-ROM for Ken. The last was making arrangements to visit with a friend of a friend.

The sky was overcast, but threatened no rain. In fact, the clouds were so thin that I had to wear sunglasses to cut down on the glare. I hiked down to the VIA station, where I dropped off the CD-ROM and a card for the Bras D’Or crew. Then it was off to resume my tour of Halifax.

I wandered down Lower Water Street, zipping in and out of various shops and courtyards. I wasn’t looking for anything in particular, but was curious to see what was there.

Several of the wharves are no longer in active use, save for the odd tour boat. The rest are permanent (or semi-permanent) moorings for vessels of historical significance. Some are tied with the Maritime Museum of the Atlantic, such as the CSS Acadia. There is also a permanent berth for the Bluenose II, even though the Bluenose itself was in Lunenburg for the winter.

During my jaunt, I found Canada’s first and only mouth-blown crystal manufacturer, Nova Scotian Crystal. They keep their garage door open so people can peer inside to see the process at work. I could barely see with all the onlookers, and moved on.

I ended up doubling back on my route, but going down Lower Water Street instead of along the boardwalk. I arrived back at Brewery Market, and thought I’d take another look inside. Although I wasn’t going to take the brewery tour again, there had been several shops that had been closed the last time I was there. With a sign that read "Maritime Handicrafts", I decided a peek was in order.

As I rounded the corner, what did my peering eyes spy, but a new friend: Stephanie. She had mentioned that she worked in a jewellery store the day before. This wasn’t exactly a jewellery store, but had some jewellery for sale. Not interested in such baubles, I concentrated on the handicrafts. We talked while she showed me the wares. But there wasn’t much there that I saw of interest.

Instead of helping me buy something I didn’t want, Stephanie directed me to Spring Garden Road. She quietly said that there was more there for me to see, and I could also tackle my lunch problem. As a convenient bonus, I was also to meet my contact at the Second Cup on Spring Garden at 3:00 – a scant half hour away.

There were many shops on Spring Garden, including Jennifer’s of Nova Scotia (the best gift shop I saw in Nova Scotia) and HMV (where I had to strongly resist the urge to buy something). Being almost time, I headed over to the Second Cup.

I had never met Jiye before, nor had I even seen a picture. She’s a good friend of my good friend Kim. (Kim had asked that if time I allowed that I meet Jiye.) Luckily, it was easy to spot Jiye – she was the only young Chinese woman standing out in front looking for someone.

I had loosely planned to spend only a half hour with Jiye. Not that I didn’t want to meet her, but I wanted to get to the Halifax Citadel before it closed at 5:00, and have enough time to actually see it. But we got so deeply engaged in conversation that time completely vanished. It was nearly 4:00 when we finally broke and parted ways.

I hope Jiye does well in Halifax. She had moved there, following her PhD advisor, who had come to Dalhousie. She was finding the experience difficult, since she didn’t know the city, had no friends, and didn’t have much of a social life. As Jiye wasn’t enrolled at Dalhousie, she couldn’t take courses either, making meeting people difficult. I offered some advice, hoping that it might make her life on the east coast a little more bearable.

Jiye returned to her apartment, and I headed up the hill to the Citadel. By the time I got there, I had barely 40 minutes of time until it closed. Deciding that a half-hour was better than no visit at all, I attempted to purchase a ticket. I say "attempted" because I wasn’t actually able to buy my way in ... in the last half hour, the fee is waived. Who said there’s no such thing as a free lunch?

The museum portions of the Citadel are quite extensive. You could easily spend most of a day just wandering in and out of the honeycomb of rooms. With my general lack of time, I did what my sister and brother-and-law do in museums: Look and keep walking. I tried to speed-read certain things, but didn’t take in too much. 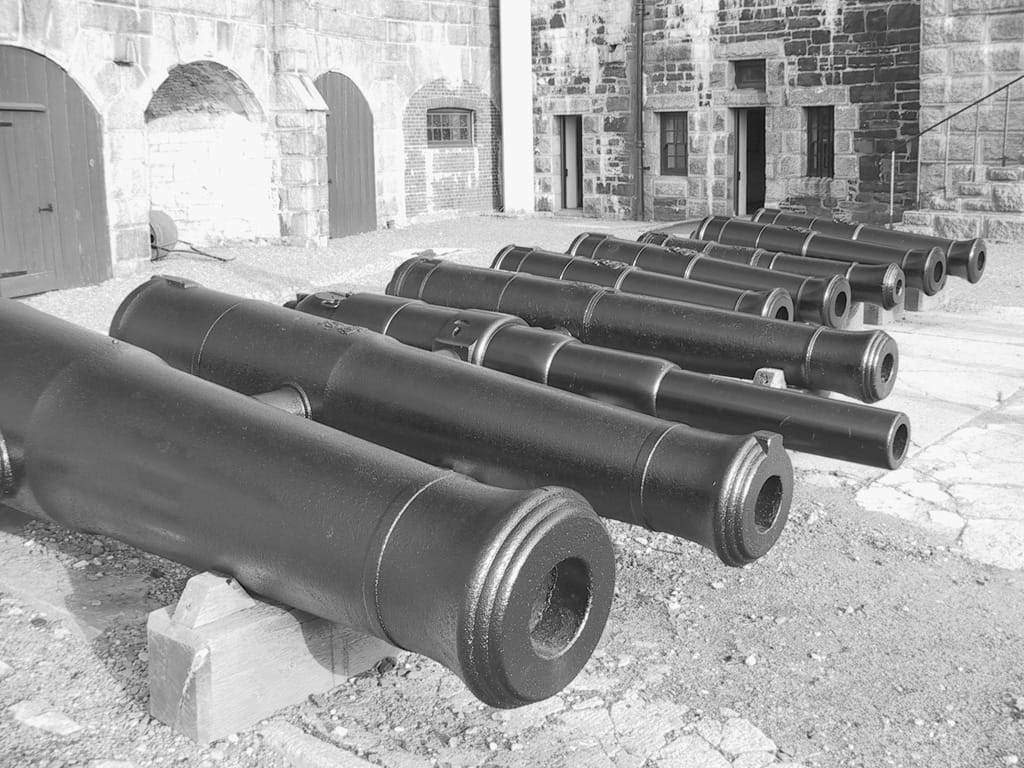 A whistle in the courtyard announced the five-minute warning. I snapped pictures hurriedly, and scooted out the door as it was being locked behind me. More pictures of the outer walls and the moat, and then of the town clock, just down the hill from the Citadel. Then further down the hill to the waterfront again, where I started to plan my evening activities. 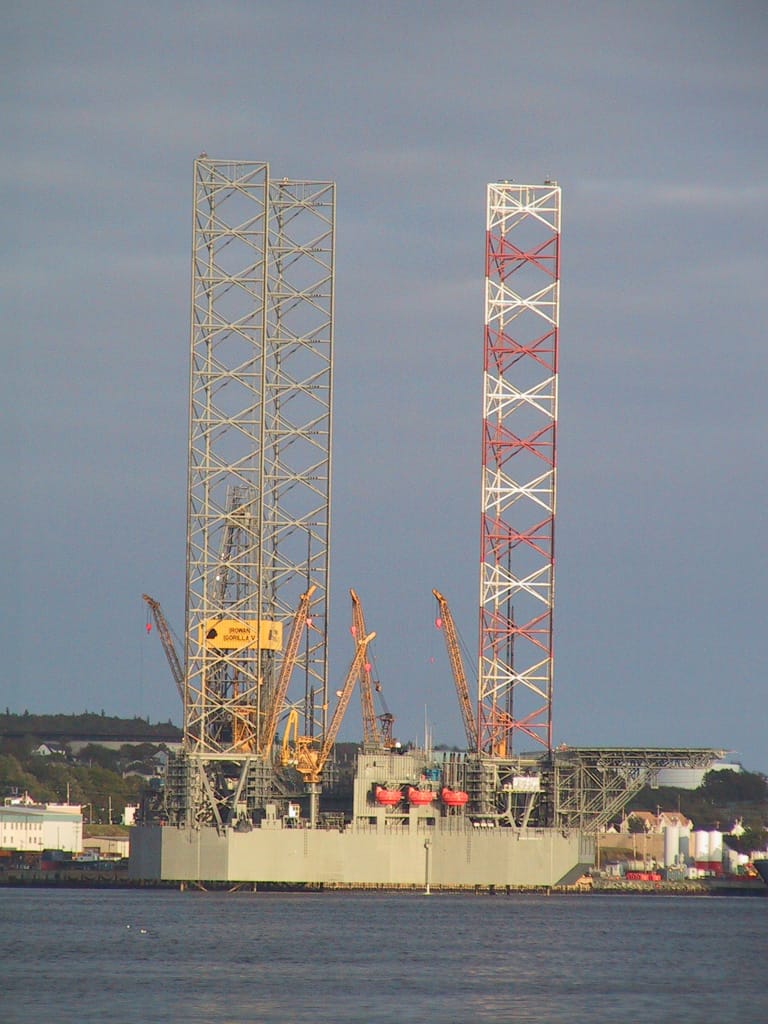 One thing I wanted was a picture of Halifax at night from the other side of the harbour. That mean taking a ferry. The question was, which ferry to which port? There are two: one to Dartmouth and a second to Woodside. If I’d ever been on the other side of the harbour before, I couldn’t remember. The other thing I needed to do was eat. I still hadn’t had breakfast or lunch, and was getting a little peckish.

My plan was: eat, take a ferry across to the other side, snap pictures, come back, and wind my way back to the hotel. Seemed like a simple plan. The key was in the timing. I had to wait until it was dark enough to get the full effect of the lights at night. It was too early to begin even dinner, so I took the opportunity to walk further down the boardwalk, past the casino, all the way to the naval base. (An American aircraft carrier was in port, and I was curious to see which one. I never did find out – the name appeared hidden.)

About an hour later, I pulled into a small pub and grill on the boardwalk to satisfy my hunger. Mussels, salmon, and some bread did a satisfactory job. My waiter was extremely helpful in solving my other question – apparently Dartmouth offered a better view of downtown.

The ferries that run across the harbour are small – about twice the size of the SeaBus in Vancouver, about half the size of the Toronto Harbour ferries. No vehicles (except bikes), and meant for commuters. The ferries have been running for 250 years. Originally, it was a teamboat – a ship propelled by a team of eight horses. Now it’s a small fleet of bi-directional diesel-powered vessels.

The trip is short – only 10 minutes or so. But the waiter had been accurate — the view was spectacular. It was also much closer to the bridge, which I also wanted to get pictures of. I took up position at the end of a wharf, and took pictures until the next ferry arrived almost a half hour later. 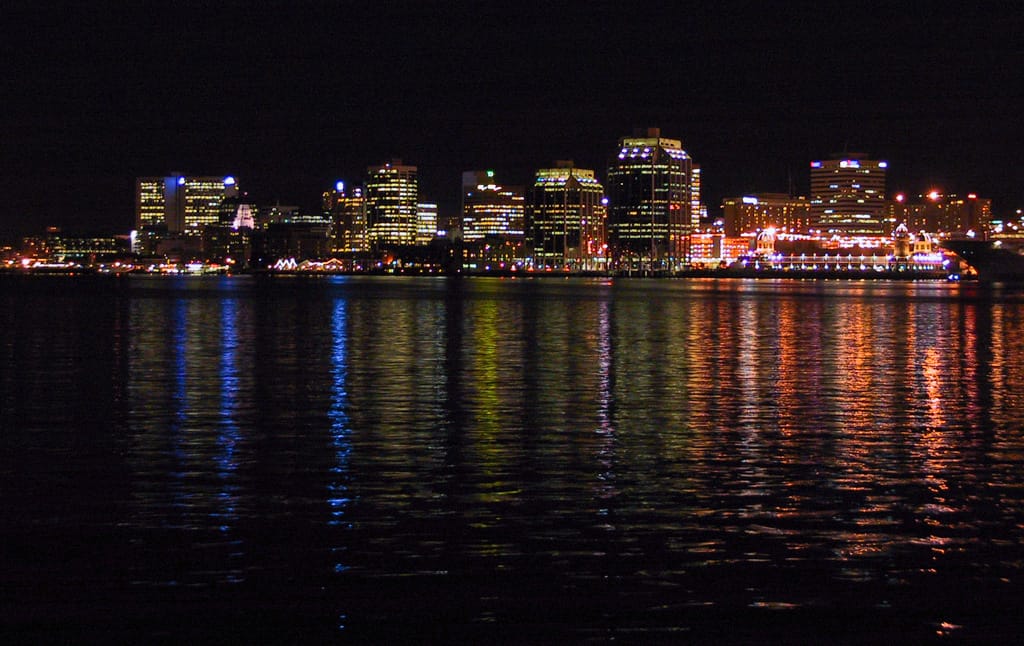 The trip back was better than the trip over. This time I faced Halifax. The buildings cast bright lights onto the harbour. The naval vessels glowed at their edges. And as a treat, we were passed by a half-full Hapag-Lloyd container ship. Then it was off around the downtown again, slowly winding my way back towards the hotel.

When I’d parted company with the Bras D’or crew, I had taken a bit of a gamble and left my name and phone number with Stephanie. My hope was that she might call, even though my expectation was that she wouldn’t. Stephanie and Angela were fighting off a nasty cold both days on the train. Even when I’d found Stephanie earlier in the day, she’d reiterated the need to get rest. But ever the optimist, I thought I’d take a chance.

That, and I was tired of wandering around. I wanted to sit down a while.

I ended up watching the Queen Elizabeth’s visit to the CBC Broadcast Centre in Toronto (looking around the audience for people I knew), and then the Gala Celebration at Roy Thompson Hall. It was a beautiful show, and really showcased some of the best of Canadian talent. It made me feel inadequate about my artistic abilities, which are generally pretty lousy.

I fell asleep with the TV on. Probably a good thing. I had a lot of driving ahead of me.