Showered and bags packed, I hiked my way back to the train. It wasn’t too far, and with only two bags wasn’t a big deal. As I neared the train station (barely more than a plywood lean-to with a small painted sign that reads "Sydney"), I began to wonder if the train departed from the same station. I didn’t see anyone on the platform, so I couldn’t be sure.

Pressing on, I turned the corner and crossed the tracks. As I did, I could hear the bell of the locomotive as the train approached. A little more relieved, I then noticed some of the crew and passengers waiting on the platform. I felt much more relieved. The train and I arrived at the same time.

Ken was there to greet us as we boarded. Lisa, Joanne, and Desmond were elsewhere on board, no doubt preparing for the day’s events. There was no sign of either Angela or Stephanie at first, but I had little doubt they’d miss the trip.

As the staff passed by, I bade them each a good morning, which they returned. Only unlike most of the other passengers, they used my name. I felt for a while like I was home again, with friends who know who knew me.

The train left on time, and began to retrace the route from yesterday. Breakfast soon appeared, and just as soon disappeared. Once the tray was gone, I began wandering again. I passed by the rail fan who Ken had been wary of the day before. He cast me a look that wasn’t quite dirty, but certainly wasn’t hospitable. (Ken would later sternly instruct the man that he was to remain seated while in the domes – he was regularly standing at the top of the staircase, blocking not only entry and exit, but also the view from other passengers.) 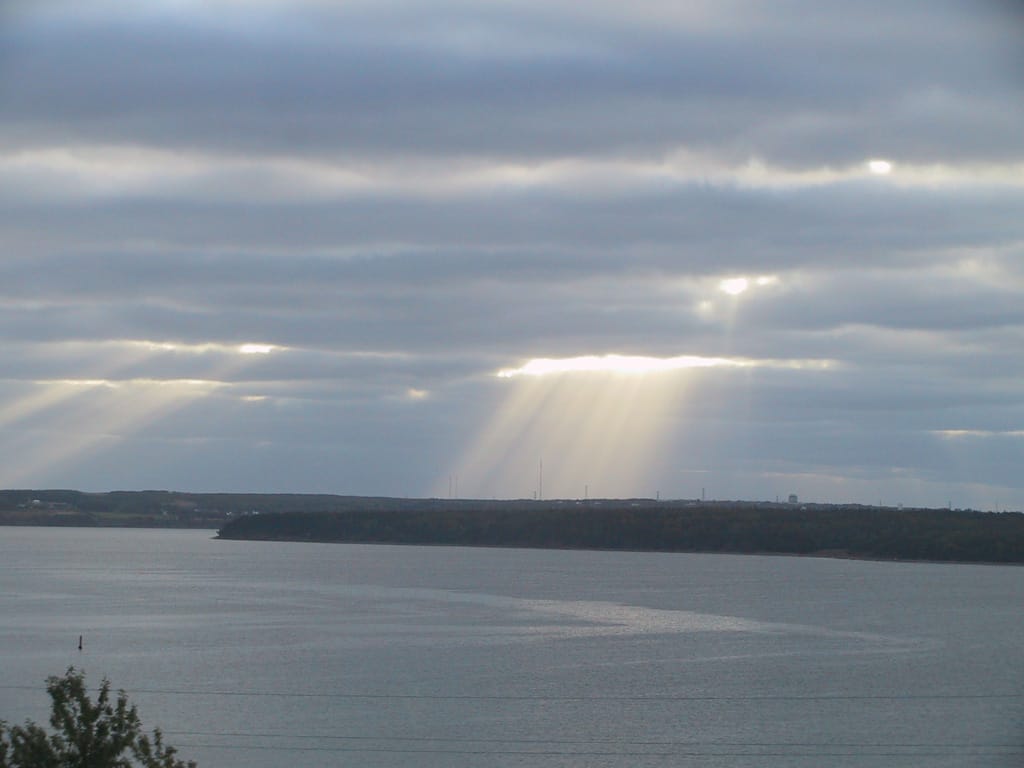 I returned to the coffee shop, where the staff was beginning to congregate again. Conversations resumed as we watched the scenery go by. Lisa had brought snacks: her mother’s cherry poundcake (absolutely luscious) and cookies called "fat archies". I’ve never had a fat archie before. Lisa calls it a "molasses raisin cookie". It has a healthy dose of cinnamon, and is almost like eating a small cake. I’m not a big fan of raisin cookies, but I could eat a whole tin of fat archies. Wow.

Lisa’s parents were also along for the ride. They were just like the rest of the Bras D’or crew – extremely friendly and very hospitable. Must be a Cape Breton thing. Lisa’s mom would later sing along with Stephanie, Angela, and Lisa, and her father would play his keyboard during the jam session in the coffee shop later in the afternoon.

Our first stop was in Orangedale. Again, the passengers disembarked, looked around, and listened as Stephanie, Angela, Lisa, and Lisa’s mom sang some of the traditional songs of Cape Breton. 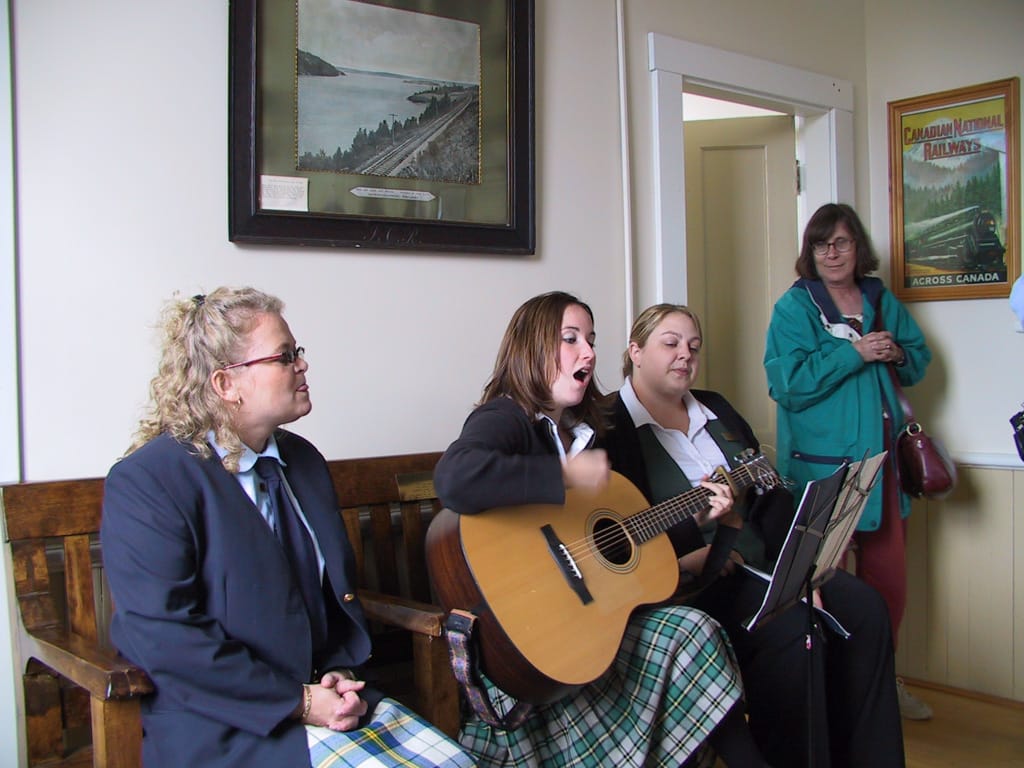 Back on the train, we headed to Port Hawkesbury. The scenery was stunning. Although mostly cloudy, the sun managed to peek through enough to make everything seem somehow more magical. Hawks and bald eagles flew alongside the train, swooping and diving in some aerial ballet, playing with the sunbeams that pocked regularly through the clouds. 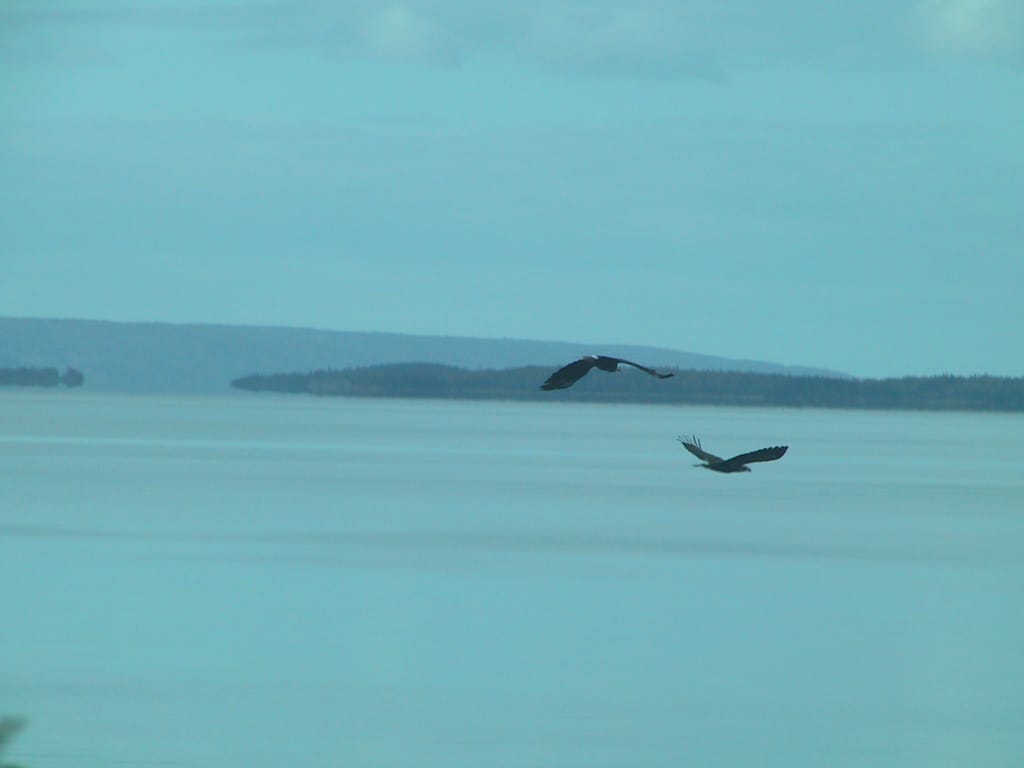 Not everyone climbed out at Port Hawkesbury. I suspect those who didn’t had been there the day before, and saw nothing to see again. I climbed out, but really only for one purpose: take a picture of the crew. Yesterday, Ken had asked me to take pictures of the scenery for him. I figured he also needed a picture of the crew. Especially if this is to be the last crew of the Bras D’or. 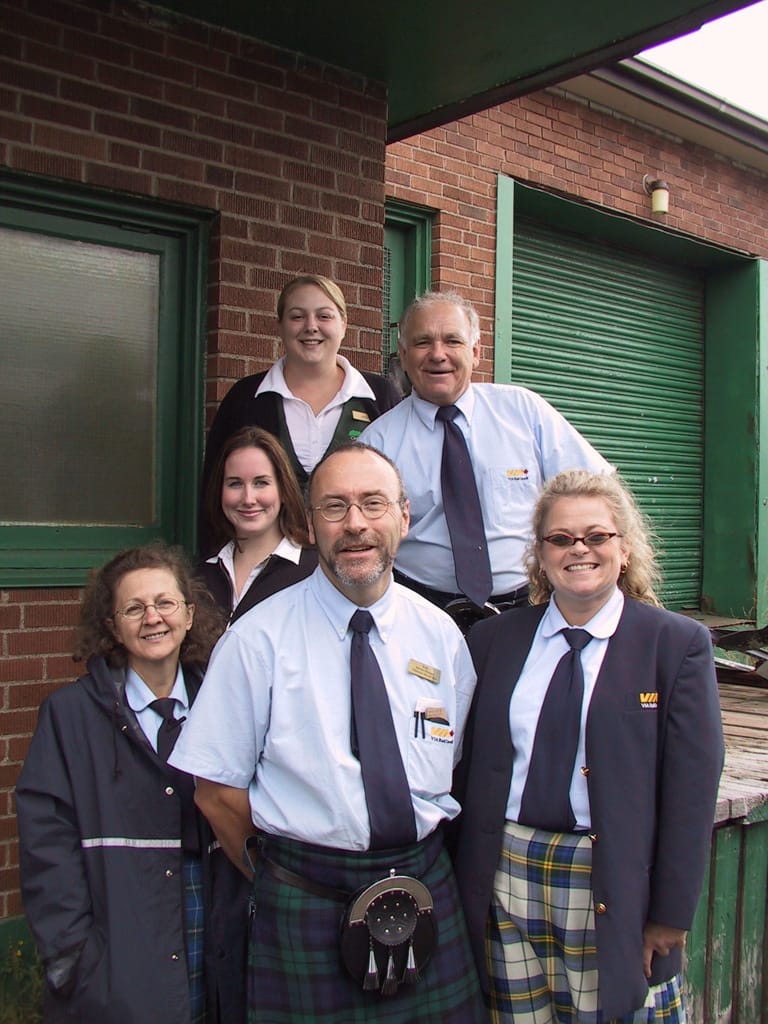 Shortly after crossing the Canso Causeway, we received lunch. Chicken for me, I wasn’t in the mood for the seafood trio I’d had the day before. And only one cup of wine this time – I didn’t want to be stumbling around the train. The meal, the wine, and the light rocking of the train soon did me in, and I was out. I woke as we started passing through Antigonish.

Returning again to the coffee shop, I found only a couple people present. The rest were off tending to duties. I chatted with Angela. I was curious to see what I was missing in the tour. This was the job Angela used to fulfill, before VIA installed the automated system. Angela shrugged and replied: "Not much", saying the only thing the automated system didn’t include were the stories.

The second music session began a few minutes later in the Laurentide Park car. It was almost reminiscent of the jam session we’d had on the CBC train coming out of Edmonton. Just not as raucous. (I was still the youngest person on board, although there were a few more younger people.) I sat in the last seat of the dome, and listened from above. I think I recognised two songs the entire session. All beautiful, but few familiar.

When the group broke up, I headed to the Skyline lounge to watch the passing countryside. (The rail fan was back at the top of the stairs again. I opted not to say anything.) As I peered out the window, Angela came by and sat down for a moment. She asked if I were bored. This had to be the most surprising question I’d been asked since I left Calgary.

"Because you saw the same thing yesterday, only in reverse. What’s the difference?" Angela returned.

She had a good point – I had seen (more or less) the same thing the day before. But there were a few things that she hadn’t considered. Angela rides the train for five months a year, twice a week (once in each direction). So immediately, that makes the trip a little dull for her. I’ve never seen any of it before. I had also made a point of getting to know the staff. Not because it would be advantageous to me (though it most certainly was), but because then I’d have someone to talk to, and hopefully meet new friends. Good conversation, carefree play, and good jokes make even 10 hour trips disappear.

Shortly after Truro came the jam session. As many people as could squeeze into the coffee shop grouped around Stephanie, Angela, and Lisa’s father. For the next hour and a half, they played whatever songs came to mind, including "American Pie" and what almost seems to be the theme song of Nova Scotia, "Barrett’s Privateers" (I’ve lost count of the number of times I’ve heard the song since arriving in Nova Scotia.) 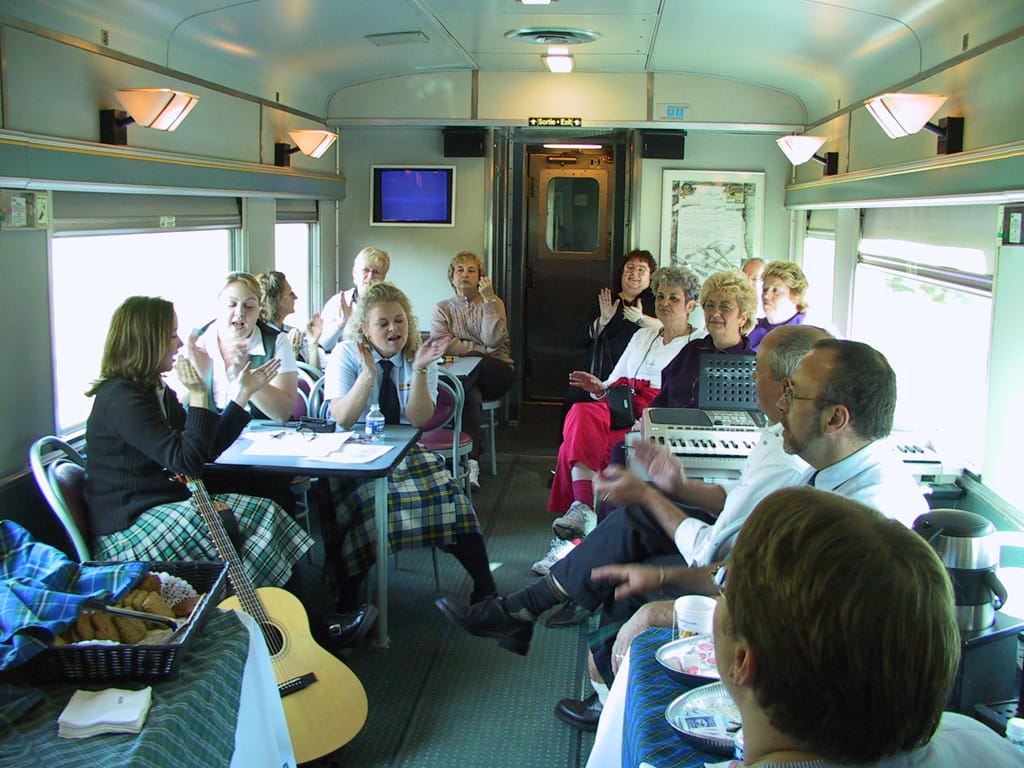 In the last hour, souvenirs came out for sale, and the staff began to pack up things no longer in use. Before long, Bedford Basin came into view. Everything was being packed away. Ken even commented on packing things away in his "tickle trunk". I’m not sure if he said that for my benefit or not.

The last vestiges of the CBC train were gone. Skyline 8502, Banff Park, the museum cars, the baggage car, and the coach car had still been in the station yesterday. (Locomotive #6403 and the generator car had left by then.) The only thing left of the trip in Halifax was me.

I was sad to leave the train. I had made new friends, who had treated me exceptionally well. I bade them all farewell, and promised to drop off a CD-ROM of the pictures I took to the VIA office the following day.

In lieu of a taxi, I hiked back to the hotel. I found this not only good exercise, but a great way to prevent aggravation. Getting a taxi at the train station is almost like waiting for Godot.

Exhausted from my trip, I’m staying in tonight, and ordering room service (it was a small pizza, nothing fancy). And laundry. (When you run out of clean underwear, it’s laundry time.)