Sleeping in is one of those little pleasures of life that I’ve been ignoring for far too long. The fact that I was still exhausted from yesterday made passing through my alarm even easier.

I skipped breakfast. I was in serious need to finish my journal entries. My contract with CBC expired last night, and it was necessary for me to complete the deal. I wrote and edited until after noon, then disappeared to the bar downstairs to upload all the content. Finishing around 1:30, it was time to resume my tour of Halifax.

Naturally, it was raining.

Actually, I knew it would rain (the forecast had been heralding rain for days). I planned my tours to include Pier 21, the Maritime Museum of the Atlantic, and the Alexander Keith’s Brewery tour. All indoors ... except for the distances in between.

Pier 21 sits between the Halifax railway station and the harbour. (Back in the day, they were connected by track so the Intercolonial Railway could whisk away newcomers to distant corners of Canada.) A short taxi ride kept me relatively dry.

Pier 21 was one of the many immigration entry points into Canada. It serviced incoming passenger ships that crossed the Atlantic from 1920 until 1971, when its last landed immigrant passed through its doors. In 1999, with grants and assistance from companies and donations, it reopened as a museum to those who worked at the facility, and all those who passed through its doors.

The museum is sparsely furnished and yet conveys the confusion, process, and lives that existed within the walls. Exhibits tell stories from those who worked or passed through Pier 21, offer artefacts that illustrate the periods of time, and let visitors experience the caged feelings new arrivals must have felt.

Perhaps the single best story is that told in "Oceans of Hope". It’s a "four dimensional" multimedia presentation that incorporates slides, movies, audio, and a series of translucent screens that create a multi-dimensional view. The presentation of the medium is one thing, but the story it tells is something else.

Just shy of one million people passed through Pier 21, all receiving the much-desired "Landed Immigrant" stamp. It is impossible to tell all those stories, so those presented are conglomerations of them. The original immigrants, the soldiers who passed through during WWII, the war brides and their children, the Jewish orphans, all linked by the narrator, a fictional immigration officer.

The story is moving. And the projection method makes the people seem not only real, but also like ghosts. It seems as if the walls are telling the stories that it has seen for over three-quarters of a century. The presentation, in concert with the rest of the museum, makes you feel a little different about being Canadian. Not necessarily proud, but privileged. As a Canadian writer (and immigrant) wrote: "A Canadian is an immigrant with seniority."

One of the more interesting exhibits is the Canadian National Train. It’s a larger-than-reality mock-up of a passenger car, where you can experience a trip across Canada. In five minutes. The trip runs from Halifax to Vancouver – it’s a video filmed several years ago (the equipment you see are VIA Blue cars, not seen in transcontinental service for almost a decade, and it runs through Swift Current, which is CPR territory). Having just finished the trip myself, in the opposite direction, it’s an interesting perspective.

I took another taxi to the Maritime Museum. The rain would have soaked me to the bone, and I was without umbrella. As it stands, I was better off taking the taxi regardless – I arrived with five minutes to spare before the Titanic 3-D movie, and the extra time allowed me extra time to look around. 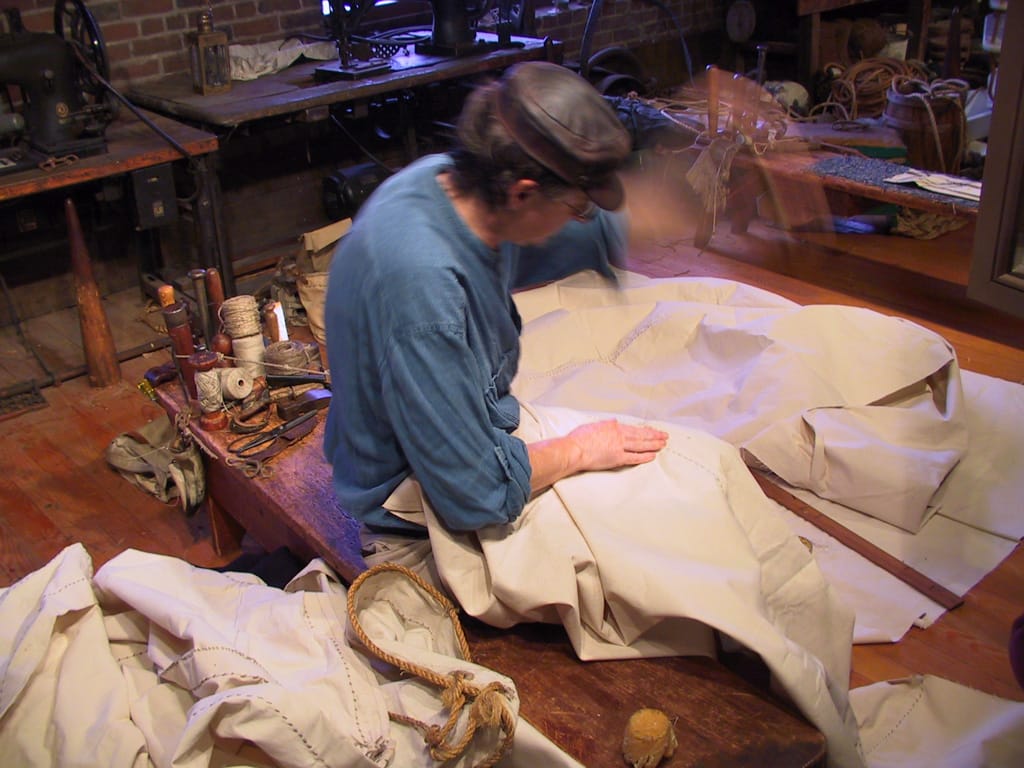 The movie was filmed at the same time as the IMAX’ Titanica, but using different equipment and crews. The film doesn’t tell any stories – it is a 20-minute view of the wreck unlike any I’ve ever seen before. The ability to actually look inside the ship as if I were actually there is both wonderful and horrific.

Exiting from the film, I wandered around the wind-powered portion. The musty wooden smell was overwhelming at times, but reminded me of my sailing days. Then it was through the extensive Titanic exhibit, and the wrecks of the Atlantic. There have been a lot of ships lost on and around the shores of Nova Scotia.

So many that I lost track of time. I ended up having to rush my tour of the rest of the museum.

I half-jogged down to Brewery Market in the rain, which hadn’t relented one bit. Slightly dampened, I entered through the North Arch, the original portal through which delivery carts once parcelled kegs of beer to points around Halifax. (There is a groove worn away in the base of the arch from the wheels.) 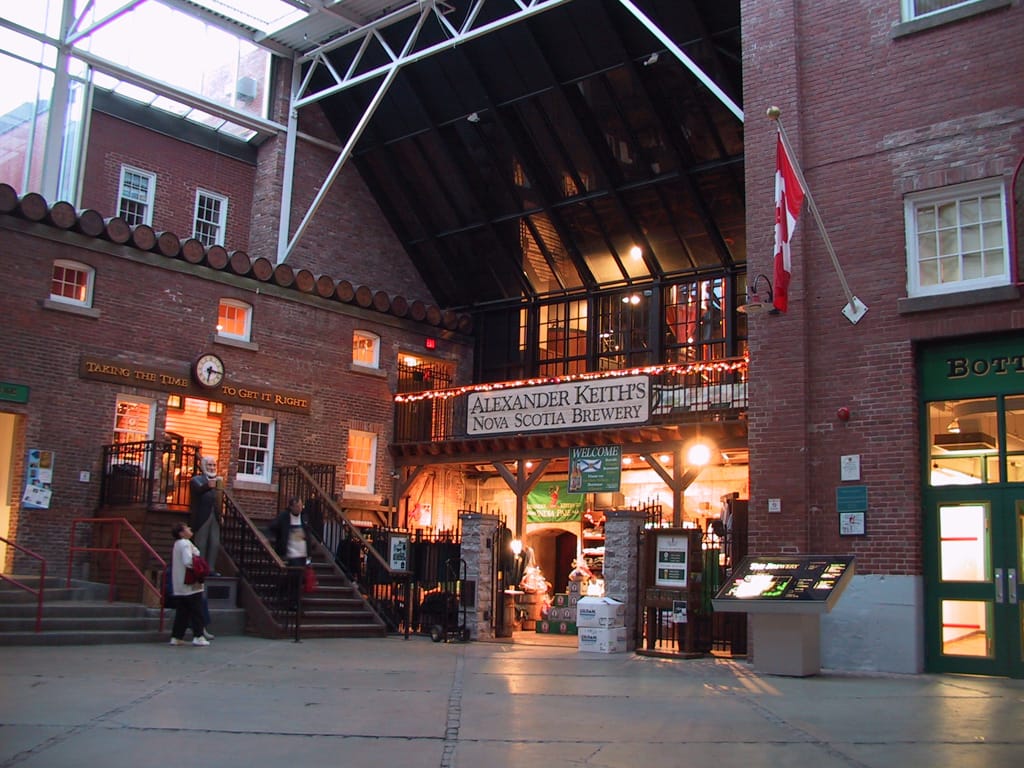 I joined the tour in progress. The tour starts in the present, then works its way back to 1820, where it begins in Alexander Keith’s dining room. The room is gorgeous, and looks like it should be hosting lavish dinners, not a five-person tour group including three men from Georgia, one from Vancouver, and a latecomer from Calgary.

Above the fireplace is a painting that is actually a plasma television screen. It shows a seven-odd minute film about Alexander Keith and how he started his brewery. You’d think something like this would be a wonderfully historical piece, considering the money they spent. (It’s a very nice-looking production.) Only problem – it reads like a beer commercial. Go figure.

When the movie ends, the main character (the brewmaster) calls out for Mr. Keith to continue the tour. You almost expect someone in character as Mr. Keith to open the next door. It’s not Mr. Keith, but the assistant brewmaster, who immediately apologizes for Mr. Keith – a busy man who must attend to affairs of the city. (Alexander Keith was twice mayor of Halifax.)

The tour leads through an office, and then into a small brew house (seen through windows from the courtyard). I think beer is still brewed here, but it isn’t the main brewery – there’s no way this small room can create the entire batch of Keith’s sold in Canada. It’s not terribly informative, either.

After the brew room comes the barrelling room. We expected to see the cellar, a malting room, all the things you’d expect when on a tour of a brewery. But instead, we ended up in the restored Stag’s Head – the basement of Keith’s original house, and the pub he used to operate. It was sampling time.

I felt kind of bad for all the actors employed. They tried very hard to make the experience interesting. But with only five people in the tour, it was extremely quiet. With such a small crew, I would have liked them to drop the act, but I guess that’s part of their job. They did it well, though. I suspect with a larger group, the tour would be much better.

It was still pouring outside. I had no particular place to go next, and touring downtown in the rain was not a particularly wise idea. I took shelter in the Four Points Sheraton before snagging a cab back to my hotel.

I called to see if Chris, Amy, or Roger were around. None answered. (I knew they were all still in town.) Figuring I’d arrived back too late, and they’d gone to dinner, I called back leaving messages wishing them a safe trip back to Toronto, hoping our paths would cross again. When I called Roger to leave the message, he answered.

Roger had been out playing golf with clients. In the driving rain. He’d been thoroughly soaked, despite wearing foul weather gear. But he’d still had a good day. Apparently, Amy and Chris were still out touring around – we would get together for dinner when they got back.

Amy and Chris had been out in the Bay of Fundy, going as far as Kentville. Returning, they’d laid down for a little while before the four of us went out for Italian. Amy found Il Mercato in her Frommer’s guide ... but it was the same one Daryl had recommended earlier.

We ate, discussed our futures (collective and individual), and enjoyed the company. Eating our fill, we returned to the hotel. I said my goodbyes – I was leaving on the Bras D’or early the next morning, and would not see the three of them off.

But I would get another chance.

As I sat in the hotel’s bar, using their Internet connection, I heard a familiar voice exclaim: "Geoff!" I looked up to see Tracy and her cousin. I had thought Chris, Amy, and I the last ones in the hotel (Roger had moved to the Westin for business). Both Tracy and Marc had extended their stay to visit their respective families.

I would join Tracy and her cousin on the way back to Marc’s room. Marc’s friend was also there. Roger would arrive shortly thereafter, followed by Amy and Chris. It felt like the last party. I did not stay too long. I had an early morning.

As I walked down the hall back to the elevators and to my room, the sounds of the small get together died out. The hallways became deathly quiet. Everyone was gone. We were the last.