Sunday, 06 October 2002
[This entry written by Geoff Sowrey, ©2002 Canadian Broadcasting Corporation (CBC). Text used with permission of CBC. The opinions expressed within do not necessarily reflect those of the CBC, employees, affiliates, or subsidiaries.]

This is an entry I dreaded writing from the beginning. It’s the last one. It’s the last day. Today, people begin their trips home. Some are staying around for a little tourism, but they are few.

I joined up with Duffy, Gerry, the Bills, the Robs, and Trish for a little excursion to the Bay of Fundy. Loading up into the crew’s two rented minivans, we took off out of the city for parts unknown. Gerry drove the first van, Trish navigating. Duffy followed in the second van.

I sat next to Bill C. and behind Rob N. Bill, the crossword king, scribbled on his newspaper for most of the trip out. Our van was quiet, unlike Gerry’s. But it gave me time to think about how lucky I was. A small handful of people were given the chance to make this trip. Sure, it was hard and at times very frustrating, but in the end it was all worth it. This is an experience that I cannot imagine having passed up.

We drove through Nova Scotia’s countryside, passing rolling hills carpeted with luscious trees, just beginning their autumn explosion of colour. In a couple of weeks, this area will be spectacular.

I fell asleep. The constant white noise of the car’s engine, the slight rocking, and quietness of the interior mimicked the train. I was still tired the night before. I woke up when I felt the car cease forward motion. We’d left the highway, and were now weaving down sideroads for a destination unknown.

Originally, we were heading for Digby. (Daryl had suggested Parsboro.) But, as with everything else with this trip, plans change. We pulled into a tiny picturesque village called Harbourville. There are more boats than houses. The harbour is the centre, with houses scattered around the sides, and up the sides of the steep hills.

Just over a short ridge of stones was the Bay of Fundy. So wide that the horizon eventually hides the opposite side. We arrived at high tide. The scene was normal — nothing that you wouldn’t expect. What we wouldn’t see was the 27 foot drop by 18:30 that night. And that’s not the largest difference in the Bay area.

Returning to the cars, we plunged back into the backroads, trying to find an apparent road that ran down the west coast of Nova Scotia. Trish was using two maps as her guide, both from car rental agencies. Neither are terribly accurate, as we would later find out. A distance that should take only 15 minutes to traverse took nearly two hours as we zig-zagged up and down roads that almost didn’t look like roads. Bill S. in the lead van suggested that we stick only to paved roads.

Trish eventually led us to Annapolis Royal, one of Canada’s oldest communities, founded in 1605. It’s a gorgeous little town, featuring national historic sites, preserved buildings, some odd sculptures made entirely out of bicycles, and the smallest pub in Nova Scotia’s history. We stopped for a much-needed lunch. 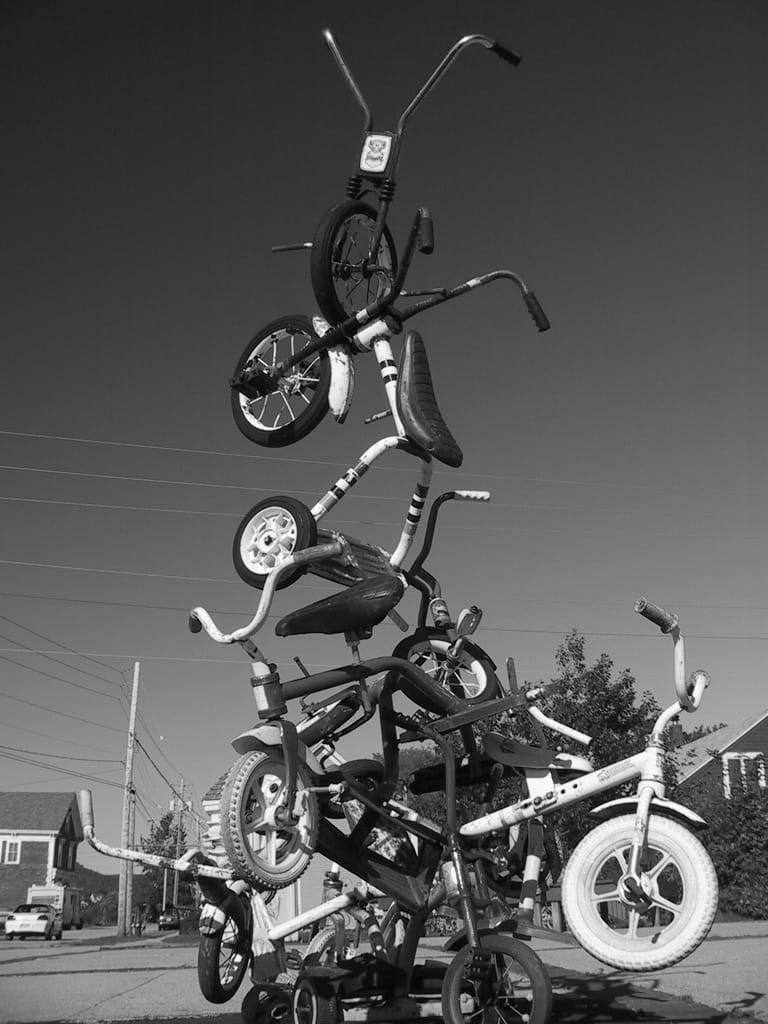 The pub wasn’t that small — no smaller than an average-sized coffee shop. That either speaks to the size of buildings in the province, or the tendency to congregate and drink. We’re still not sure which.

After our repast, we walked around the town. The tide was well on its way going out — there was already a 10-15 foot drop visible on the shore. There were still three hours until the water would reach its lowest level. One boat owner took the opportunity to paint part of his hull. On our way back, we stopped briefly at Canada’s only tidal power generator, just to the north of Annapolis Royal. 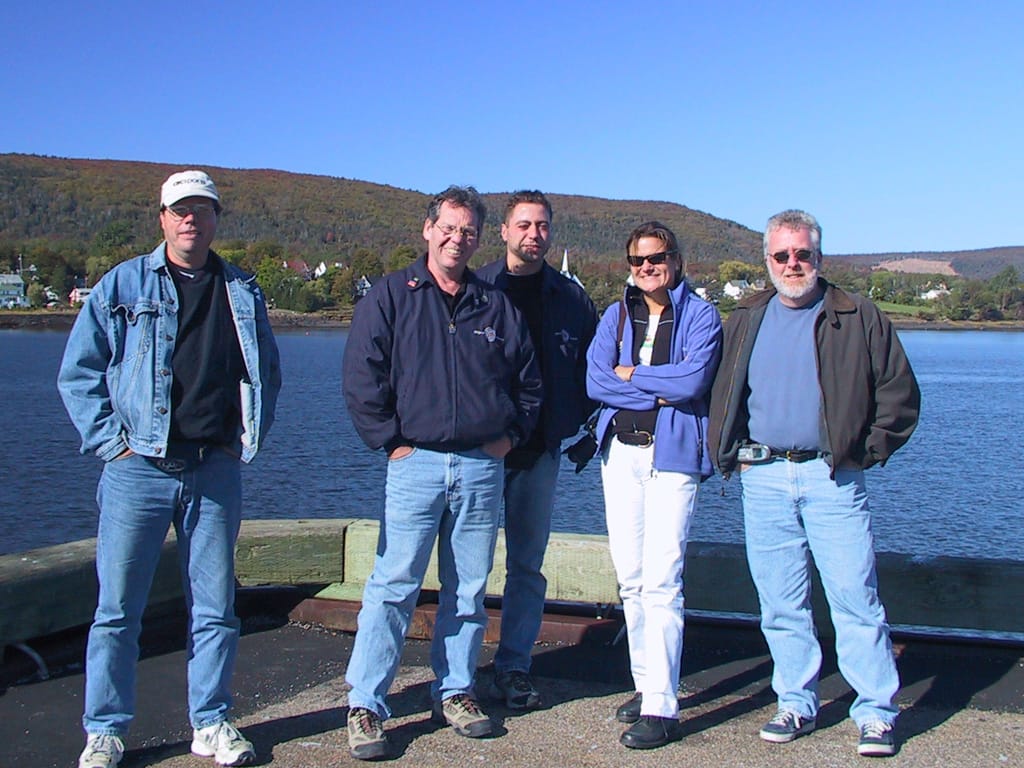 Tided out, we started heading east. I think I slept. Both Rob and Bill dozed for a while. How Duffy stayed awake the entire time is admirable. Even with all the trouble following Gerry’s van, we eventually found ourselves in Mahone Bay. Another very picturesque town, it’s the home of the Scarecrow Festival. (Similar to farming scarecrows, the coastal scarecrows were historically used to keep birds off the boats.) 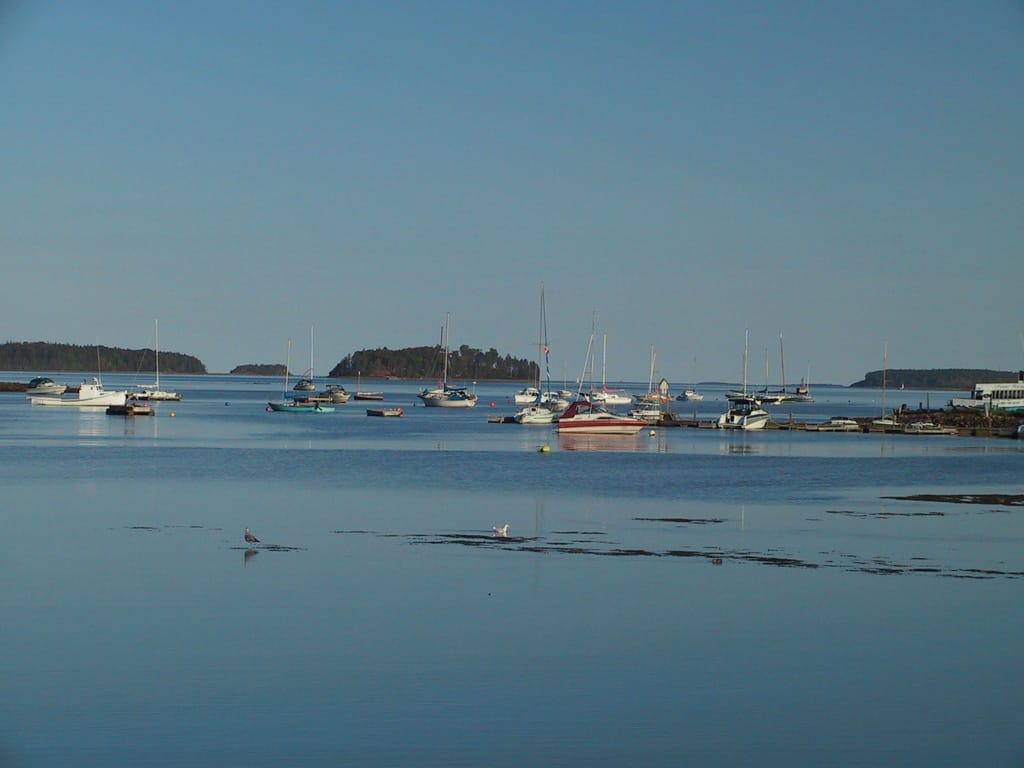 We spent a little more time in Mahone Bay, mostly to stretch our legs. (The vans weren’t very comfortable.) As we reloaded, Bill S. jogged over to join us — he needed Bill C.’s help with a crossword. This caused some confusion. The two vans drove out unsure of exactly who was where. A kilometre down the road, we realized that we’d left Rob N. behind. We found poor Rob standing in the parking lot, two coffees in hand, wondering what the heck was going on.

We were back at the hotel an hour later. With an hour break, we left again with Amy and Chris to have our last (partial) team dinner in Halifax.

And then there were eleven. Ten of us ate at the Upper Deck, and Roger floated in an out, entertaining clients and suppliers. Roger was already hard at work again. Everyone else had left town.

Thoroughly sated at the restaurant, we met up with Roger at the Economy Shoe Shop, a very eclectic bar a few blocks away. It would not be a repeat of days past. A final drink, and the crew headed out. Soon, Amy, Chris, and I returned to the hotel.

I sat, looking out my window at the Halifax Citadel. Tomorrow, I will not likely see anyone else from the team. I will miss them all. Each was a unique, unstereotypical person. Each was a friend and teacher. How I will fill the void their departures leave behind is anyone’s guess.

I have spent my last. But I have no regrets, and given the chance, I’d do it all again.