Saturday, 05 October 2002
[This entry written by Geoff Sowrey, ©2002 Canadian Broadcasting Corporation (CBC). Text used with permission of CBC. The opinions expressed within do not necessarily reflect those of the CBC, employees, affiliates, or subsidiaries.]

Early morning call. The last one. Breakfast, grab things for the day, taxi to the station, and begin final set-up. New Media didn’t change from the day before, but others were moving around in the station to better locations. Luckily, it wasn’t too much work, and fairly expeditiously handled. When the CBC Halifax staff event began (it was our first of the day), we were all ready.

So began a day that, at least for me, was little more than a blurry dream. It was pockmarked with little things, like each of us getting our chance at Be An Anchor, or exchanging addresses. The production was slowly running out of steam. One more event would have been too much.

The Be An Anchor was perhaps one of the sillier parts of my day. Roger had decreed that everyone was doing Be An Anchor before the end of the day. When I was down at the museum car (for what reason I can’t really remember — I was probably hunting something down in the coach car), Roger abducted me for my session. Neil was just coming out of his. I suppose I should have played it "normal" and just read the script. But there was a part of me that just refused to go down without goofing off. So I dropped my voice, upped the cheese-factor, and played it like an over-the-top newscaster wannabe. Then, inspired by Irene’s song back in Campbellton, I finished with a high-pitched squeaky-voice version of "Little Bunny Foo Foo".

According to rumour, Neil caught wind of my little performance and immediately wanted to redo his. He hunted all around for something to improve facial scars so he could do the reading as Dr. Evil. I can’t wait to see it. 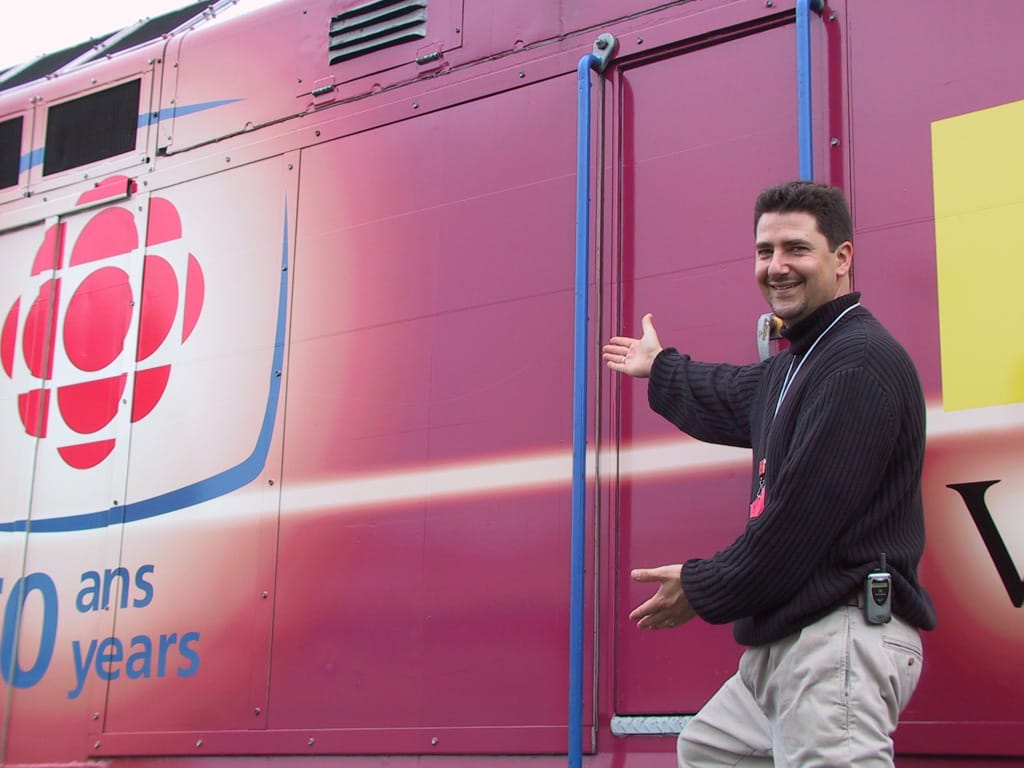 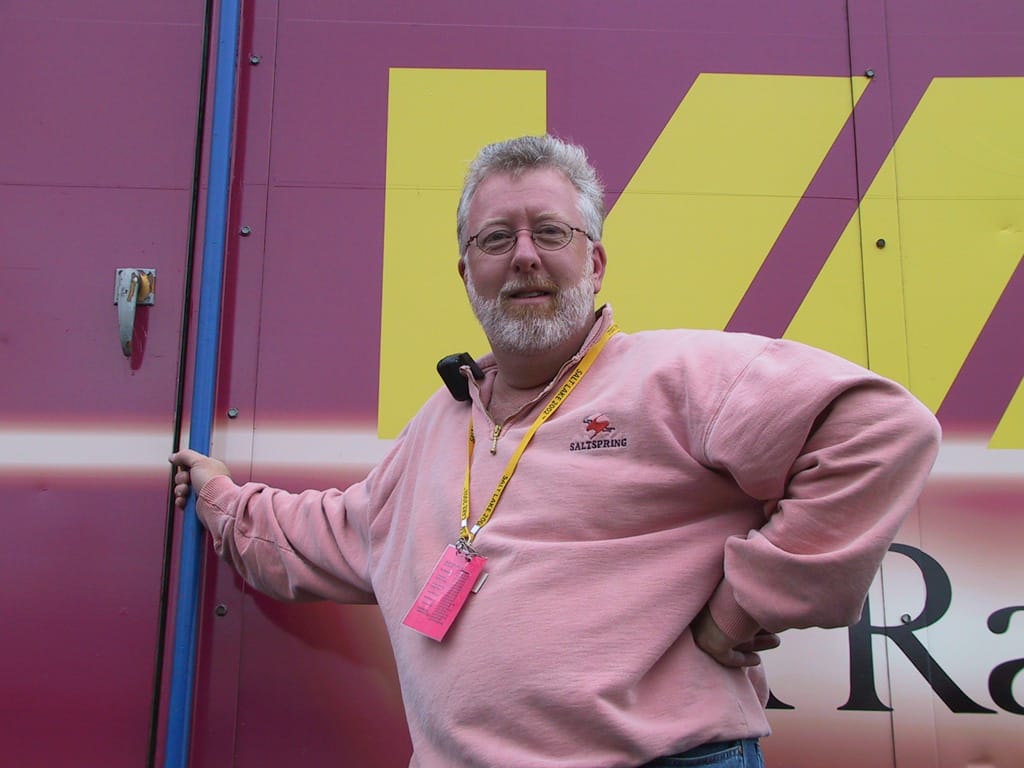 This Hour Has 22 Minutes made good use of our train. When we were setting up yesterday, one of the 22 Minutes crew came and "borrowed" Ron Maclean. At first, we thought he was stealing it. (Luckily, Rose was able to straighten us out.) Mary Walsh arrived before the public event started and did her run through the museum ... as Marg Delahunty, Princess Warrior. She conned (or convinced, not sure which) Ivan to let her wear the Friendly Giant’s boots for part of her segment. I was fortunate enough to watch the filming, snapping the odd picture or two for the website. Then it was off to Be An Anchor, where she filmed a segment (though didn’t read our script), and then wandered into the baggage car. But not for a part of her segment. It was to take a picture with the crew. Then, it was back into the station for the last bit. 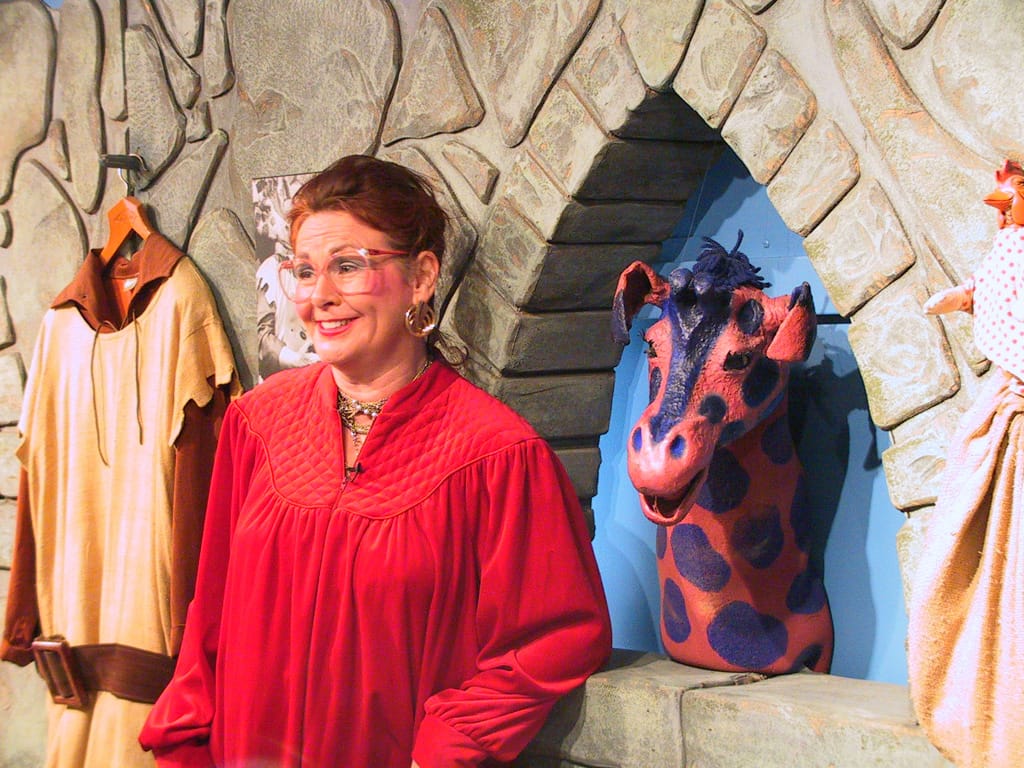 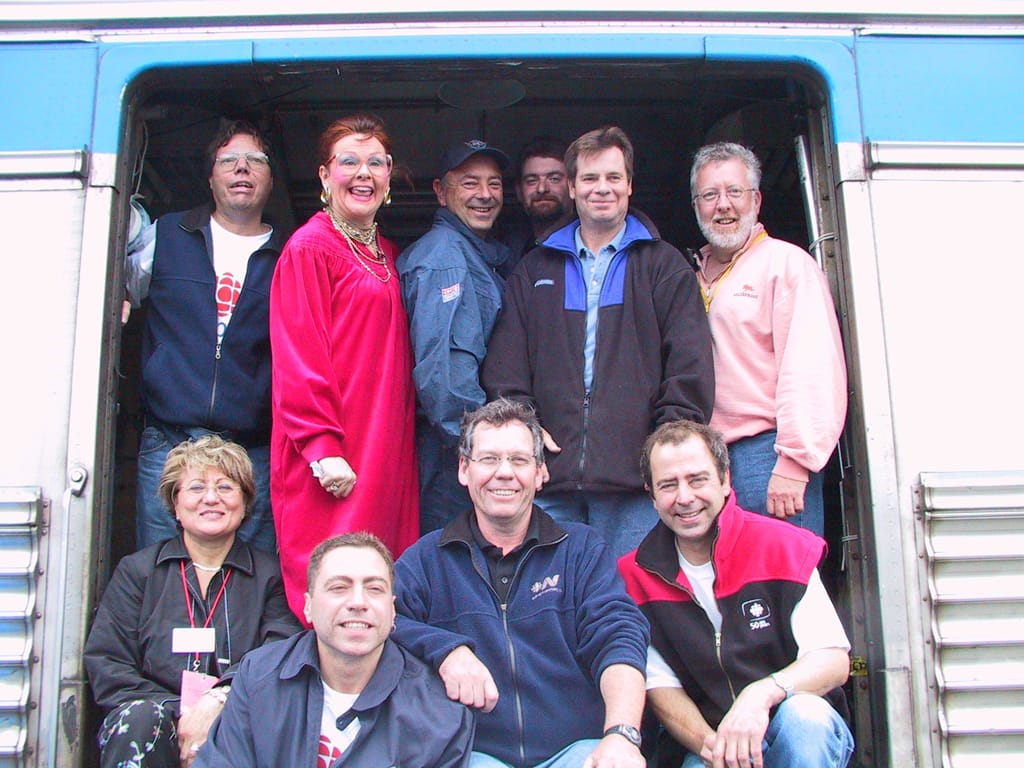 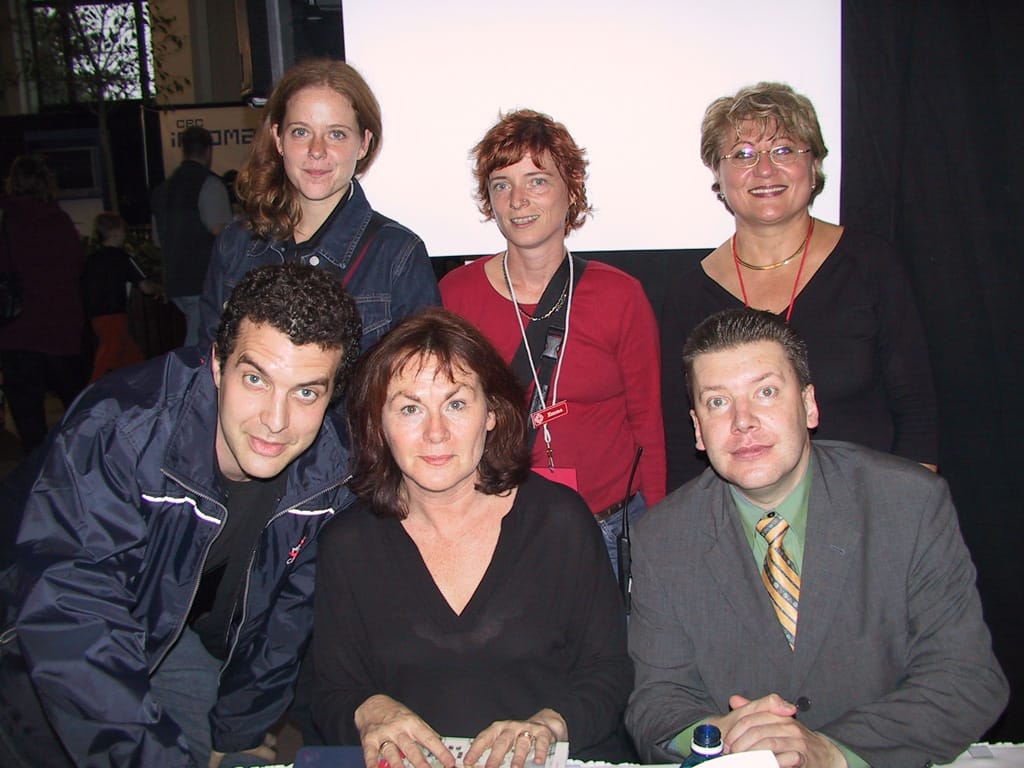 I spent far too little time at the New Media display. Today will be the last time I see this train, the last time I could take pictures of the events and the crew. It was also the last time I’d have to repackage things going back to Toronto. That was a heap of fun. Luckily, I had kept most of the New Media stuff in one place, so it wasn’t too bad putting it all back together. I had two laptops to take care of: the Dell (a mirror of Daryl’s computer) and an IBM ThinkPad which was an emergency backup system (I never used it). The Dell was staying with me an extra week (with Brenda’s blessing), so I packed the laptop with everything else. [Ed. Note: In hindsight, I should have hung onto both of them. When the train arrived back in Toronto, the IBM had gone missing.]

Koceila seemed not to mind being regularly abandoned as the day went on. He’s been a total trooper since he joined us in Montreal, and loves interacting with the public. Which was good, because I think I’ve actually lost the taste for it for a while.

As I was packing away in the coach car, and chatting with my project lead regarding the return of certain pieces of equipment (specifically, the laptop), I got a call on the walkie-talkie: "She’s here." "She" is Michelle, a fellow train enthusiast, and someone who’s been following our journey online. (You’ll remember her from yesterday. Michelle’s the one from Indian Head, Saskatchewan, who flew to Halifax to visit her friend, and to come out and see us in our last venue.)

I left the train (and Koceila again) to talk with Michelle and her friend Pam, about the reasons why they came out, how they knew each other, and what they thought of our exhibit. Michelle has loved trains her whole life, something she got from her mother. She has been writing her own daily journal since graduating from university. The mix of the two created an irresistible urge to come out and see what we were doing. Pam didn’t even know we were coming to Halifax. The three of us ducked out of the show for a little while into the hotel bar. (Relax, I don’t drink on the job ... often. I had ginger ale.)

The last hour and a half of the show passed quickly. Roger filmed the rest of the train crew (except Duffy) at Be An Anchor. The filming had turned from a chance to do something interesting into a contest to who had the best reading. We all played at our own sets: colouring at the tables, playing with the kiosks, and getting dressed up in the Noddy mascot costume and wandering around. It was probably the most fun we had at an event. 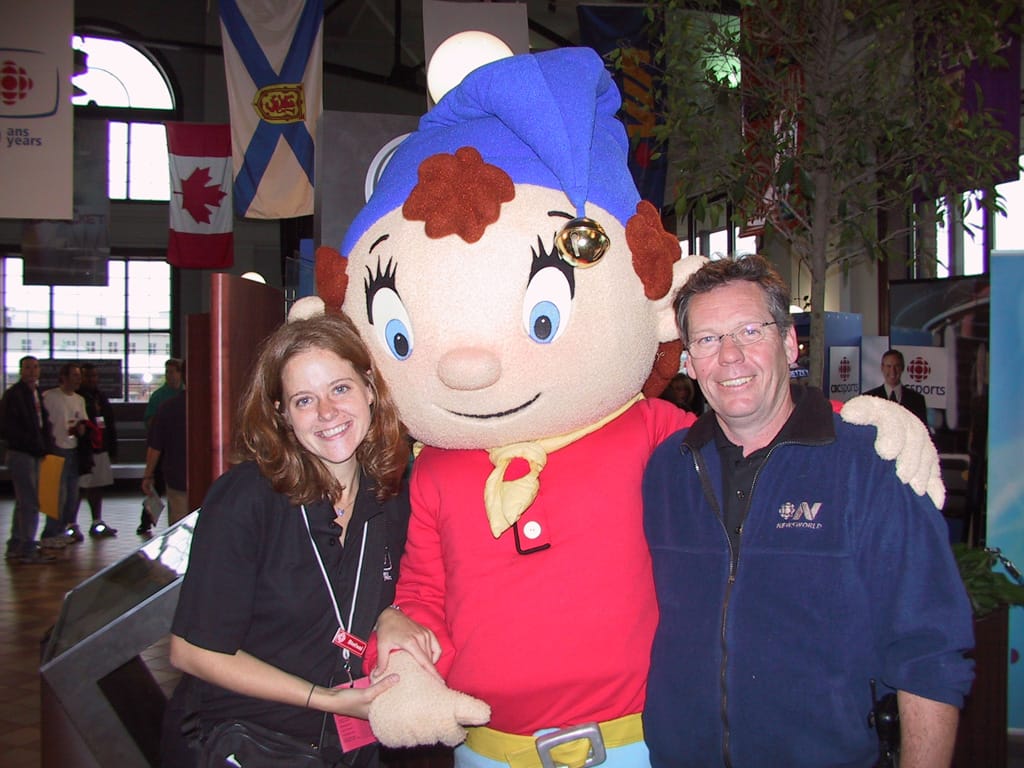 I spent the last minute of our show in the mobile, taking Dan’s picture for the staff scrapbook. Then, without fanfare or celebration, it ended. When I got back into the station house, the extra lighting was already off and sets were coming down.

Packing wasn’t as fast as Moncton — that will remain the shortest time. We really weren’t in any rush, though. There were plans for the evening, yes, but we’d given ourselves plenty of time. New Media’s final strike had a couple of special requirements, as two computers, two monitors, and a sign had to go to Toronto ahead of everything else. The Queen’s visit at CBC’s Broadcast Centre needed New Media representation. (Originally, the plasma screen was to go as well, but a coordinated effort between Brenda, Julie, and myself pretty much killed that idea.)

As we shuttled boxes, tables, and portable walls up and down the platform, a pop-hiss announced the departure of our sleeper cars. The Chateau Denonville, Chateau Lauzon, and Chateau Rigaud pulled away with another train. Only the Skyline 8502 remained, along with the Banff Park, museum cars, baggage car, and coach car on another track. A few of us just stared and watched as our home slowly drove away.

Darkness descended with the stowing of the last few items. Almost everyone (without prompting) came out onto the platform to watch the last packing — the stairs we used for climbing in and out of the baggage car. Another ending, as the doors to the cars were closed for the last time. We headed into the station for our last crew picture. 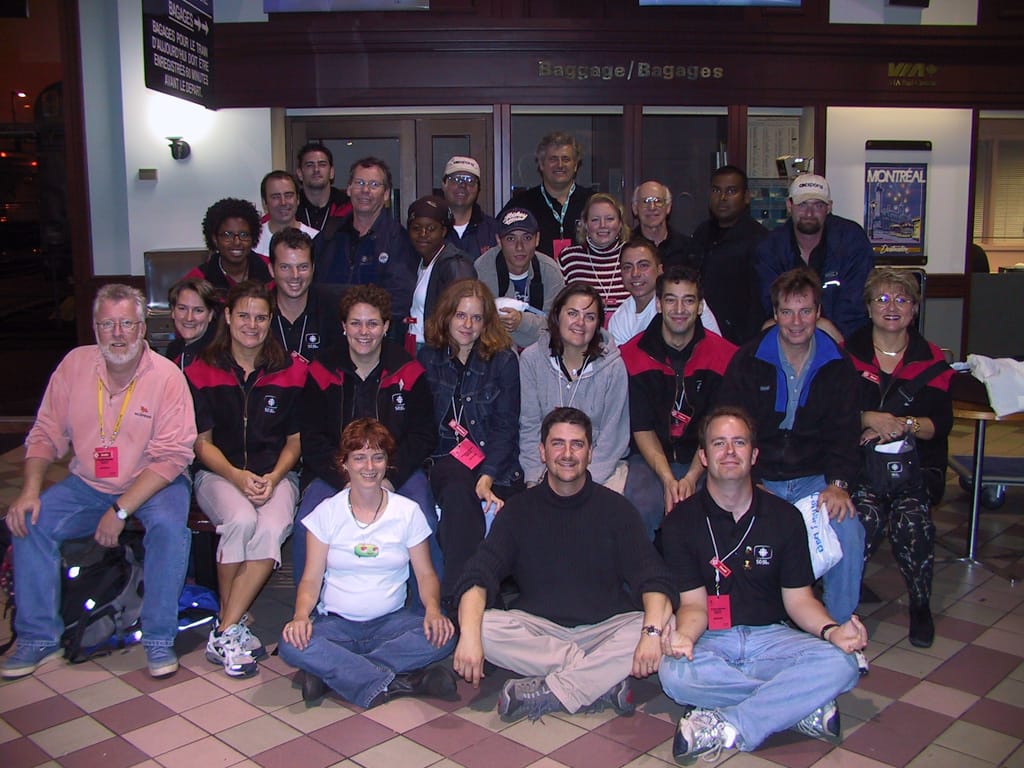 Earlier in the day, Emma had made reservations for dinner at Hamachi House, the best sushi restaurant in town (so far as she could find out). After making a trip back to the hotel to dump the things we didn’t want (and change, in a couple of cases), we grabbed taxis to the restaurant. We were going to finish this trip as we’d started it: with raw fish. We weren’t alone, followed by Julie, Julie’s husband, Koceila, Lisa, Ivan, Analisa, Neil, and Daryl (though not all at the same time). Emma and I certainly got our money’s worth, especially with the uber-fresh tuna.

The restaurant had sushi boats, which we sat around. We didn’t get to use them for food (billing would have been a problem), but we used them for passing around origami animals and haikus:

Sea to sea sushi
Endless lifting of stanchions,
The train rolls away.

It’s only a paper moon
Hung in a cardboard sky
But, it’s only make believe 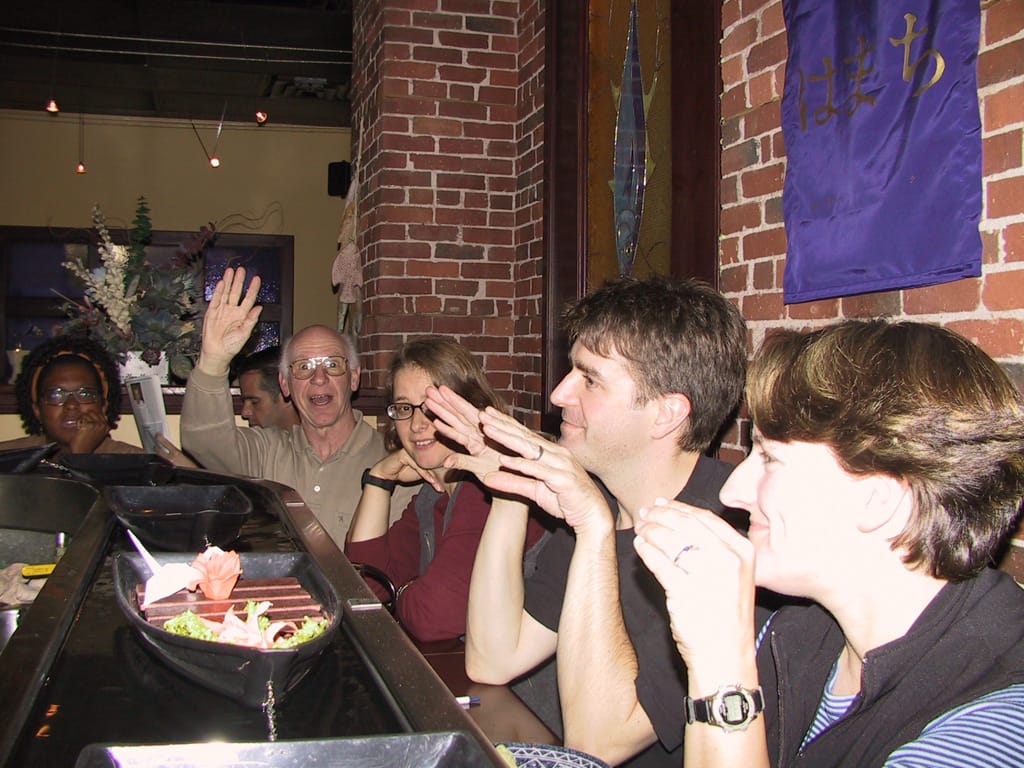 Everyone headed over to Ginger’s Tavern afterwards for a post-show libation. It was our last hurrah. Even the various VIA staff who had been on and behind the front lines came out. Papers were sent around collecting email addresses. Cards were exchanged. But it didn’t have the air of finality. It felt no different than every other time we’d gone to dinner, drinks, or gone shopping with each other. There were tears when Stefani left, as she flies out early tomorrow for England. 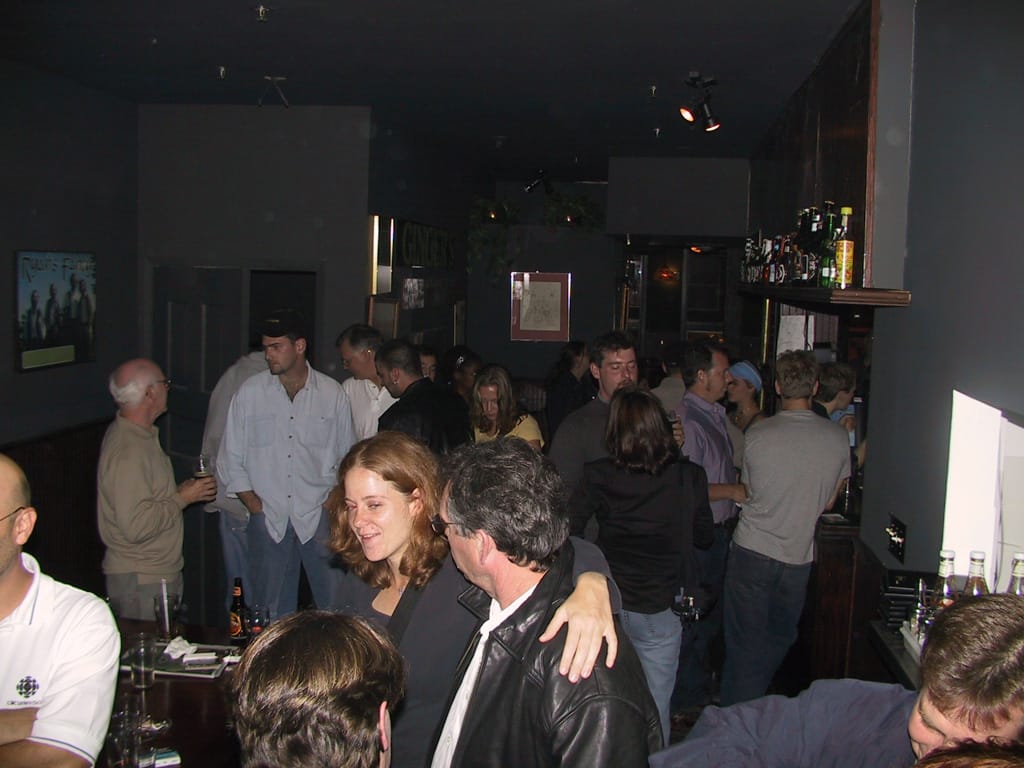 We abandoned Ginger’s Tavern and walked down the road to a club (the name of which I’ve forgotten) that is supposed to be really good. It was crammed to the walls, and the band playing wasn’t particularly good. We opted for a place across the road, the Party House. (I wasn’t choosing these places. If I had, we’d have ended up at a place where you could conduct a civilised conversation.) Analisa worked that magic we’d seen in Saskatoon, and got almost the whole lot of us into the club without paying cover.

Lisa and Chris found just how stubborn I can be when it comes to dancing (namely that I dislike dancing to club music). Some danced. Some shouted at each other over the music. Last call came over the speakers. We paid no attention. Daryl headed out into the night, deciding it was time for him to exit. I wasn’t sure if I’d ever see Daryl again, and thanked him not only for doing a great job, but also for being a patient person and offering all the suggestions he had over the course of the month. Originally, when I was do have done the video, Daryl was to be my teacher. In the end, he taught me more than I could have thought.

And then, far too soon than any of us would have liked, the music stopped, the lights came on, and we woke from our month-long collective dream. The CBC TV 50th Anniversary VIA Rail train was over. Our last hurrah was now quiet. We all knew it was time. "Goodbye" truly is the saddest word.

For most of the team, it’s "see you back in Toronto". Patrick and Koceila return to Montreal. Stefani goes to England. Daryl drives home to Frederickton tomorrow. I will remain in Halifax for a few more days, but I begin my trip home on Saturday. Standing in the brightly lit interior of the club suddenly made that fact very real. I was about to never see these people again. Julie and I tried to say things to each other, but we both ended up crying. The end was so chaotic that there were those I never said farewell to. I don’t know if they were there, or if I just missed them.

The team scattered into the night. Some I would see again the following day, some not. We all walked into the darkness not knowing what would happen next. For the first time in a month, the future is unknown. 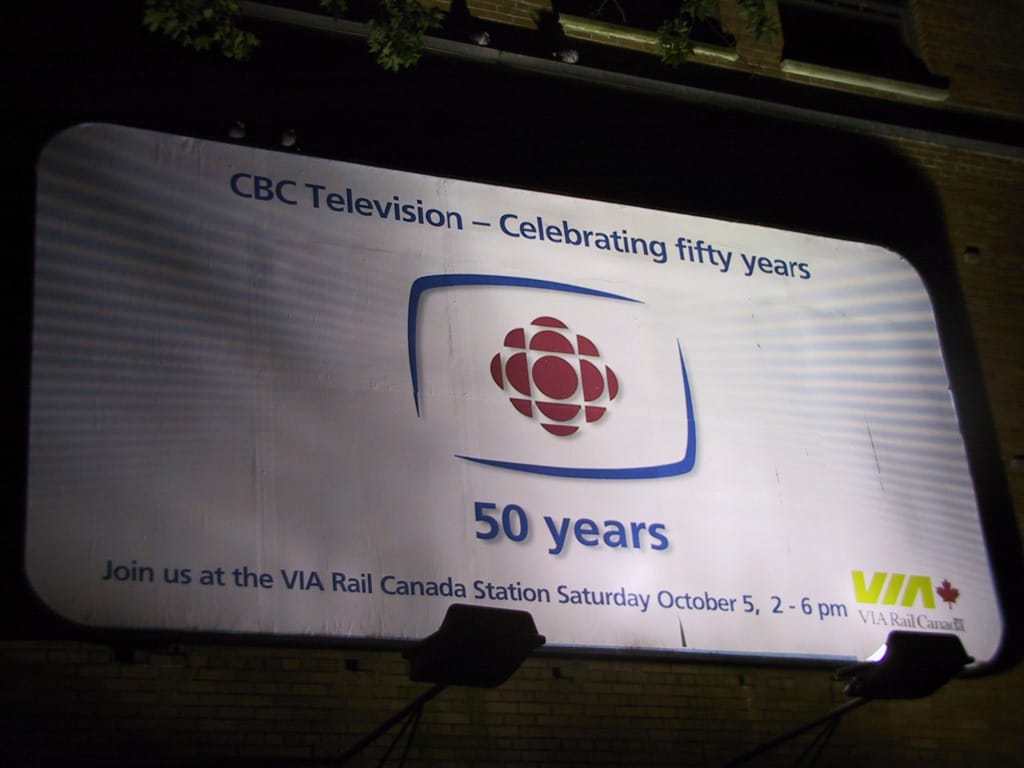