Friday, 04 October 2002
[This entry written by Geoff Sowrey, ©2002 Canadian Broadcasting Corporation (CBC). Text used with permission of CBC. The opinions expressed within do not necessarily reflect those of the CBC, employees, affiliates, or subsidiaries.]

A maternity ward of babies didn’t sleep as well as I did last night. I stirred only once, when the cleaning staff tried to come in the room. I woke late, but feeling more awake and alert than I have since this trip started.

We arrived at the Halifax station to find it a hive of activity. It seemed that there would almost be no room for us to set up. Tonight was a VIP event, signifying the end of our odyssey.

It was our last time unloading the train. But despite the finality, we had no lack of drive. The train was dutifully unpacked, and items drawn into the station. The fit was a little tight with some items, such as the centre triangle for New Media and "The Beast" from the Boutique.

During set-up, I had yet another partial run-in with fame. Julie pulled me aside to tell me of a woman who had been following our journey through my daily journal. What blew me away was that she’d tried to catch up with us in Melville. Over half the country away. She had flown from Indian Head, Saskatchewan to see us here in Halifax. Both Julie and I were beside ourselves.

By 2:00, everything was almost ready. That’s when we were told of touch-ups. This is our second-to-last event. We’ve spent 27 days on the road, and our equipment isn’t exactly looking new. (The fact that it looks good at all is amazing.) For our final events, the tables received a new coat of paint.

We literally ended up watching paint dry. The Halifax station is quite active — VIA’s Ocean train departs and arrives every day. Busses are also a constant source of traffic. The last thing you want is for things to go missing. We don’t expect theft, we just don’t want to encourage it.

One of our group activities was a group photograph. We’ve taken two already, one in Jasper and another in Winnipeg. We now have our final crew, and it should be immortalized. However, due to some rather odd scheduling, not everyone was around when we got to taking the picture. We’ll shoot another picture tomorrow, but we’ll already be short one person. 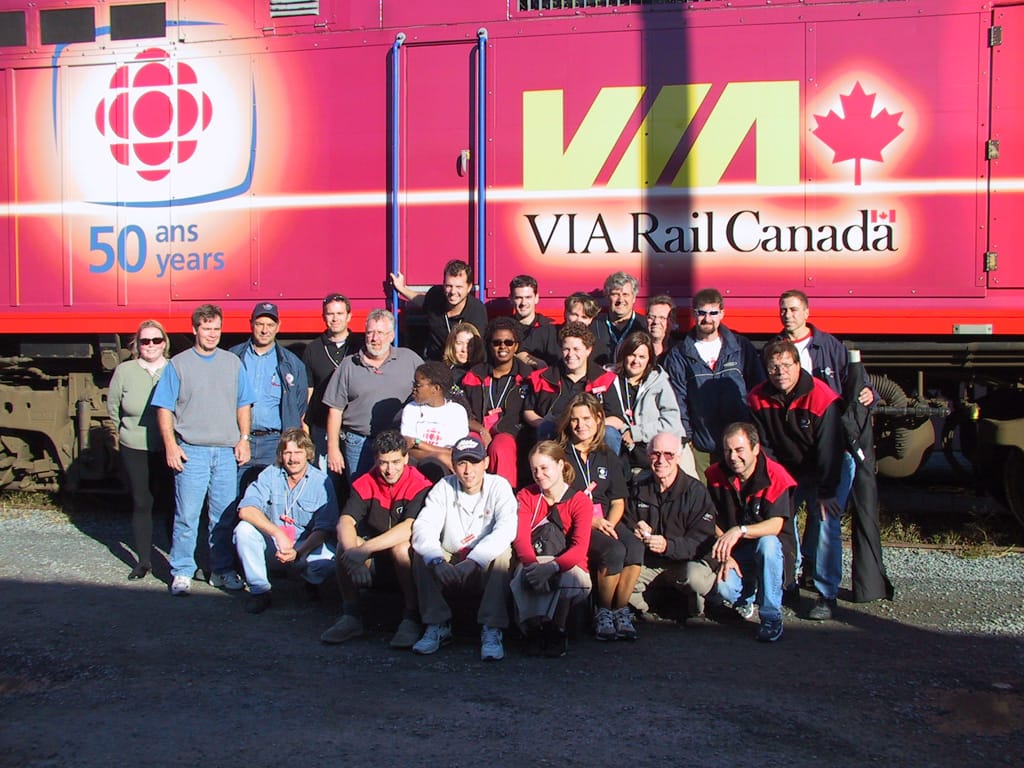 Today, Angela left us for home. She is the first of the original crew arriving in Halifax to leave. It was a sad occasion, though for most people it will only be a short time until they see her in Toronto. I will be lucky if I see Angela again. On Sunday, many others will take their leave. Today was but a hint of what is to come.

The VIPs started arriving just after 5:00. For the next four hours, we wandered about, handing out giveaways, and trying to be helpful. It’s not our favourite kind of event. It requires a lot of work, and doesn’t produce benefit. Most of the visitors are here to see other visitors, not us. We’re window dressing. We’d rather add extra hours onto the public events.

Barely a month ago, I thought VIP events were pretty neat. I guess it doesn’t take long to get jaded. 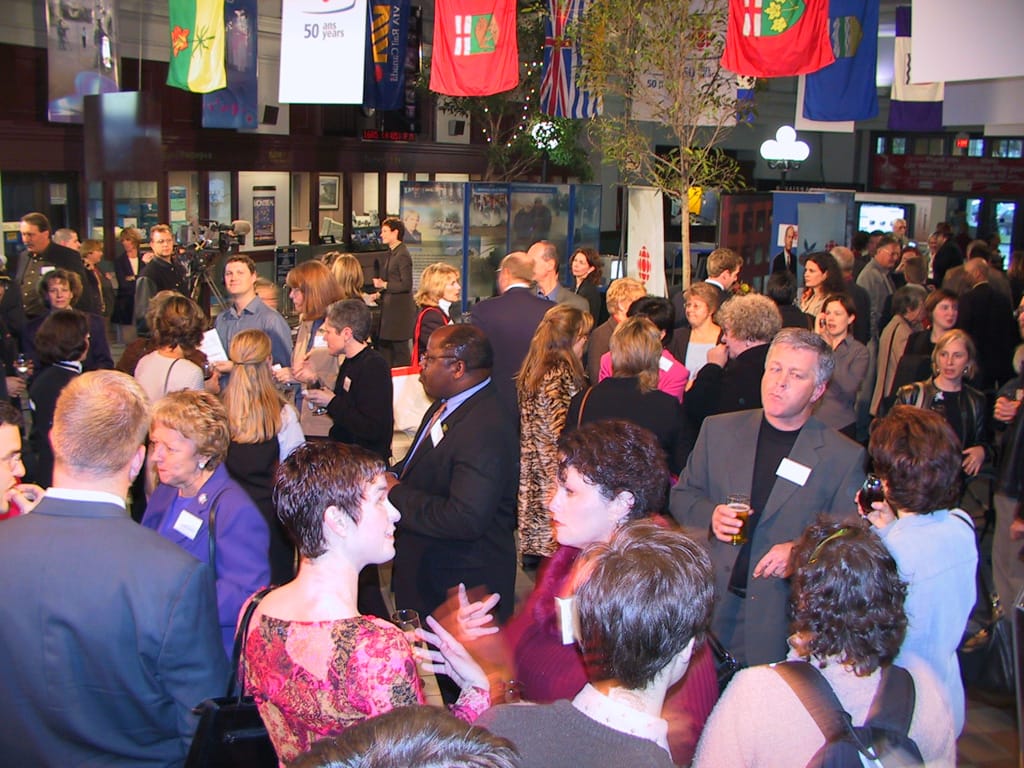 Speeches were a key focus. It gave time for CBC to bring up the Executive Vice-President, Harold Redekopp for a chance to talk about what the 50th Anniversary meant, and what part the train played. I personally preferred the speech by the Honourable Myra Freeman, the Lieutenant-Governor of Nova Scotia.

The single best speech was a rant by Rick Mercer, shown on video (Rick himself was present). It echoed another shorter rant he had done for the 50th anniversary, but with a more political slant. It was extremely funny, especially when he illustrated just how Canadians view the CBC. I would repeat examples, but they would likely be edited for content. 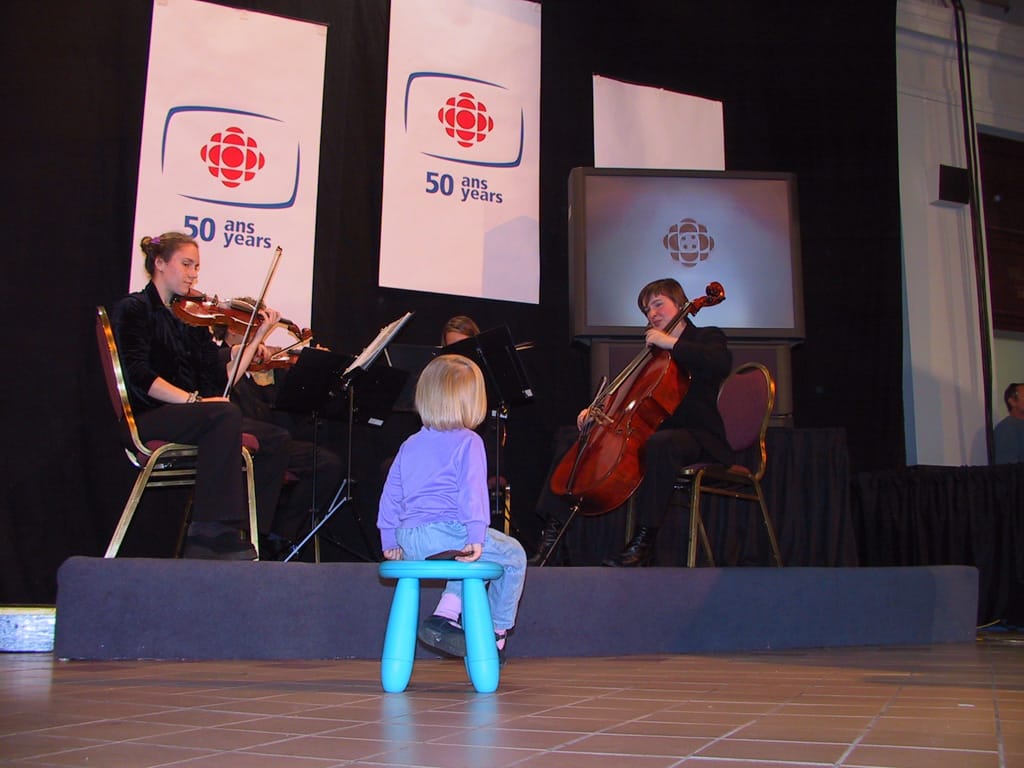 Back in the hotel following the event, I would see Rick again on "Tuning In", one of the 50th anniversary shows. I caught the very end of the show, and saw little. But what I did see were the credits. For the first time, I knew the names that went by on the screen. I didn’t just know who they were, I had worked with them. They were friends and comrades. The credits had meaning.

After a month on the road with the CBC, I now understand the appeal of working in television.