Tuesday, 01 October 2002
[This entry written by Geoff Sowrey, ©2002 Canadian Broadcasting Corporation (CBC). Text used with permission of CBC. The opinions expressed within do not necessarily reflect those of the CBC, employees, affiliates, or subsidiaries.]

No-one slept well last night. It was too hot, too bouncy, too loud. I think it was also because the last night we slept on the train was 18 September. Since then, we’ve slept in large beds in hotels, or at home. Our first night on the train was exciting, so we didn’t notice the change. After over a week in controlled conditions, the erratic environment of the train is a little unsettling. Today, we get back into the groove we had when we started almost a month ago.

Today is what used to be a typical day for us: arrive in the early morning (usually in the wee hours), set up the displays, entertain and inform the local populous, pack up, leave late in the evening. We’re all looking forward to the regularity for the next couple of days. Most of us seem to like this pattern. We’ve officially become the Cirque du CBC.

I awoke to an announcement suggesting we eat breakfast and get ready to unload the train. For only the second time since the trip started, and the first on the train, I’d overslept. As I walked down the length of our Chateau cars, I could see the river, or the Gulf of St. Lawrence (a significant body of water, regardless). Admittedly, I’d never been to Campbellton before, so I wasn’t sure what it was, and I never did find out. [Ed. Note: It was neither. Campbellton sits on the south shore of the Restigouche River, west of the river mouth, south of the Gaspé Peninsula.] 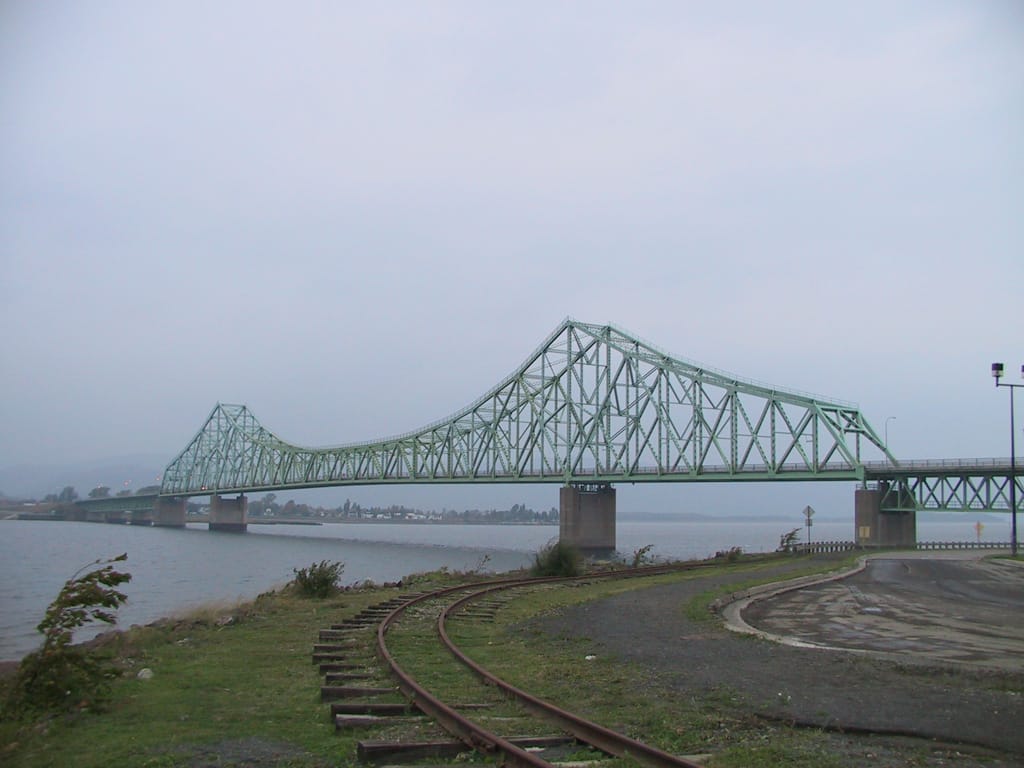 Gulping down breakfast in record time, I ran outside to catch up with the rest of the team already beginning to unpack the baggage car. Set-up was almost too easy. We’ve done these so many times that the problems are reduced to predicting the weather. (No wireless connection in Campbellton — no surprise, there — so we couldn’t check the online weather forecast.)Koceila had little trouble, learning the ropes extrememly fast. As usual, crowds were forming long before the doors were officially open. We’ve never turned people away, just so long as we can accommodate them. Our official start was 12:00, but we were entertaining long before then.

Roger was running around with the Polaroid camera while everyone assembled their sets. I think Roger either got too much sleep last night, or has gone certifiably insane. Either way, his smile and laughter is becoming infectious. (Hmm... maybe we’re all going insane...) His jovial condition proved advantageous when a car drove right into the barricaded parking lot we were using for our show. Roger looked a little ticked at first. He went to talk to the driver, an elderly woman, and pointed the direction out of the lot. Then he took a picture of the passenger. He came over and told me, giggling the whole time, that the passenger was Hazel McCallion, the mayor of Mississauga, ON. Apparently, she was visiting her sister — the driver.

As usual, we received our volunteers a few minutes into the game. Normally, we’re given students or local CBC employees. I can only assume that students of sufficient age were hard to come by. This time, we received two of the oldest and kindest ladies in Campbellton. Neither really knew how to use a computer. I stood there and laughed to myself at the idea, but I knew by this point that I really didn’t matter. It’s about servicing people, not computers. So long as they reached out to those who came around, we would be successful. And since these women knew almost everyone in town (it seemed), success came easily. (The volunteers would change partway through the afternoon, and we’d get late-teenaged volunteers.)

The weather had been iffy from the moment we started — cold, damp, and threatening rain — but we risked a full New Media set-up. It was the small towns that we loved all through our trip. We were hoping Campbellton would be as much a success. I kept one eye on the sky at all times.

Just after noon, we already had a large crowd. We were off to a strong start. We were feeling very positive about the event (the previous two hadn’t really done anything for our self esteem). Then came a sound that we hadn’t been expecting, and initially worried us tremendously. Protesters. A large group of them marched up the street, whistling, chanting, and waving signs. I think everyone in our group froze, wondering what kind of trouble we were going to get ourselves into. At first, we thought they were protesting something we had done, or that CBC didn’t re-sign Ron MacLean. (Hey, some hockey fans are that devoted.)

It turned out to be the local CUPE union, striking due to a lack of a contract. Some of their signs showed slogans, while others wished CBC and Radio-Canada a happy 50th birthday. In both languages! (We can only assume they did that so they would be "accepted" at the event, rather than politely asked to leave. As they caused no trouble, we didn’t see a need to have them removed. They stayed for about an hour, mingling with the crowd, seeing our displays, cheering for whomever was on stage. Eventually, they gathered back together and returned to their march.

Rain came again, as dreaded. There were the odd deluges, but nothing as serious as Montreal, and all fairly brief. Also, we were on a parking lot, so we didn’t have to worry about mud. Except for Children’s, that is — they were in the low part of the parking lot. Lake CBC formed under their tent after a while, and the tent ended up having to shut down (the Mural was moved inside the VIA station to remain available). The Boutique also had to close early due to rain falling on their spare supplies. 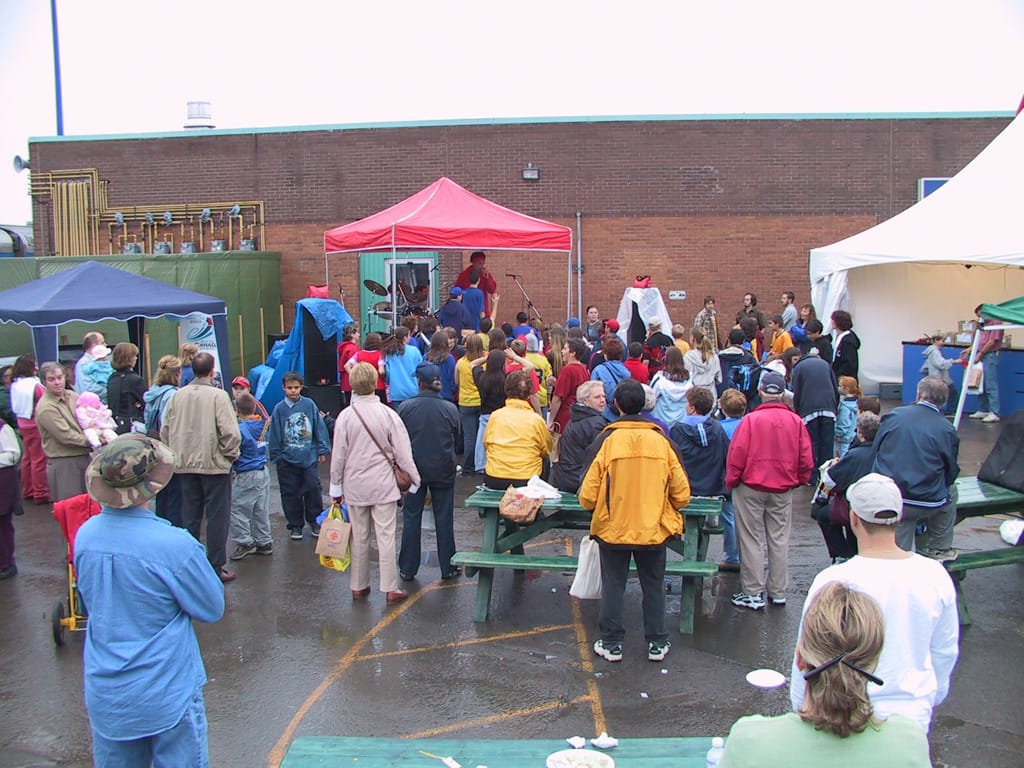 Throughout the day, we had people of all ages, all walks of life, and speaking both languages, come out to see our displays. All of them, regardless of language, loved everything. Not a single disparaging word. Even the weather didn’t seem to stop anyone from coming out.

One woman in particular was one of our volunteers, Irene. She was perhaps the single most energetic person I’ve seen since leaving Vancouver. Although as part of her volunteering she made an effort to promote us, I think there was a lot of self-interest. Even when Irene’s time helping out was over, she hung around. She saw the museum, even did a stint at Be An Anchor, where she entertained the crowd by adding on the first verse of "Are You Lonely Tonight (for Seniors)" ... after a lot of goading from me and several of her friends. 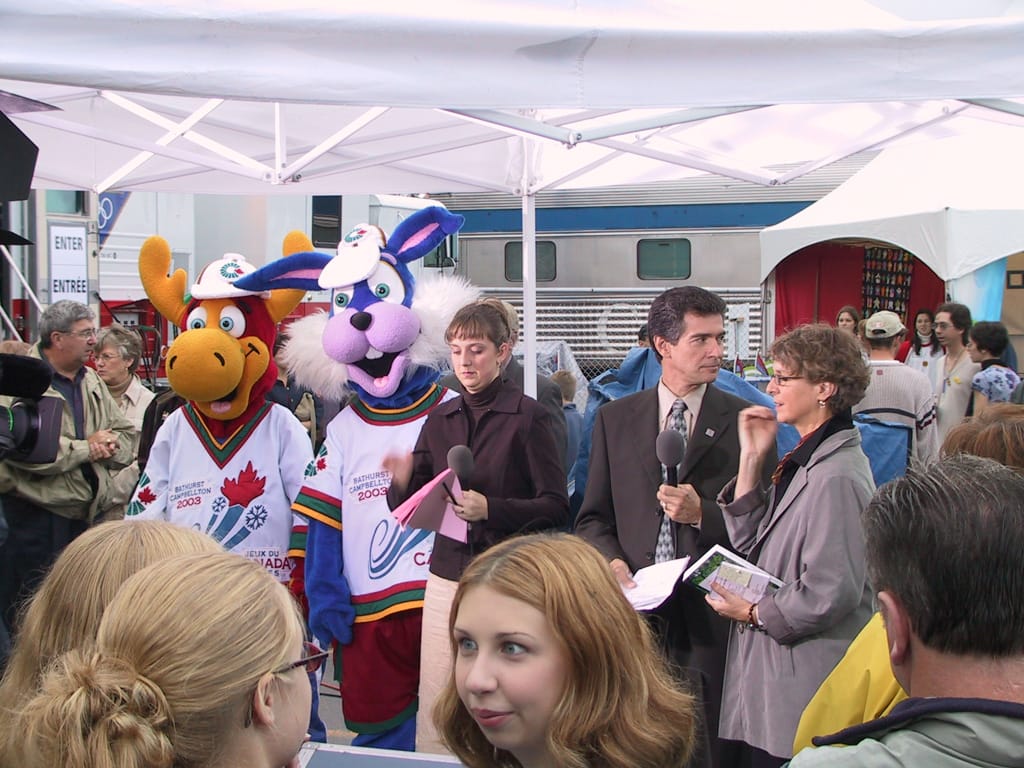 During a lull in the activities, I made an effort to wander around Campbellton. Having never been there before, and not having been particularly on the ball (Marc’s father is from Campbellton, so assumedly, Marc knows something), I didn’t really know what too look for. The only real thing I could find was the bridge linking Campbellton with the opposite shore of the river. That, and a small, rusty narrow-gauge railway whose lineage I couldn’t figure out. (It’s not in my Trackside Guide.) Things I need to remember to research when I get home...

In other places, we’ve had little trouble closing down at the end of an event. Campbellton was just such an example, until Koceila and I started turning off computers. First, all our volunteers suddenly vanished, leaving Koceila and I to tackle it alone. Also, Koceila can’t see well in the dark. And having a the local CBC station doing a broadcast next to our tent introduced issues of ownership. I think we lost a powerbar or two tonight. 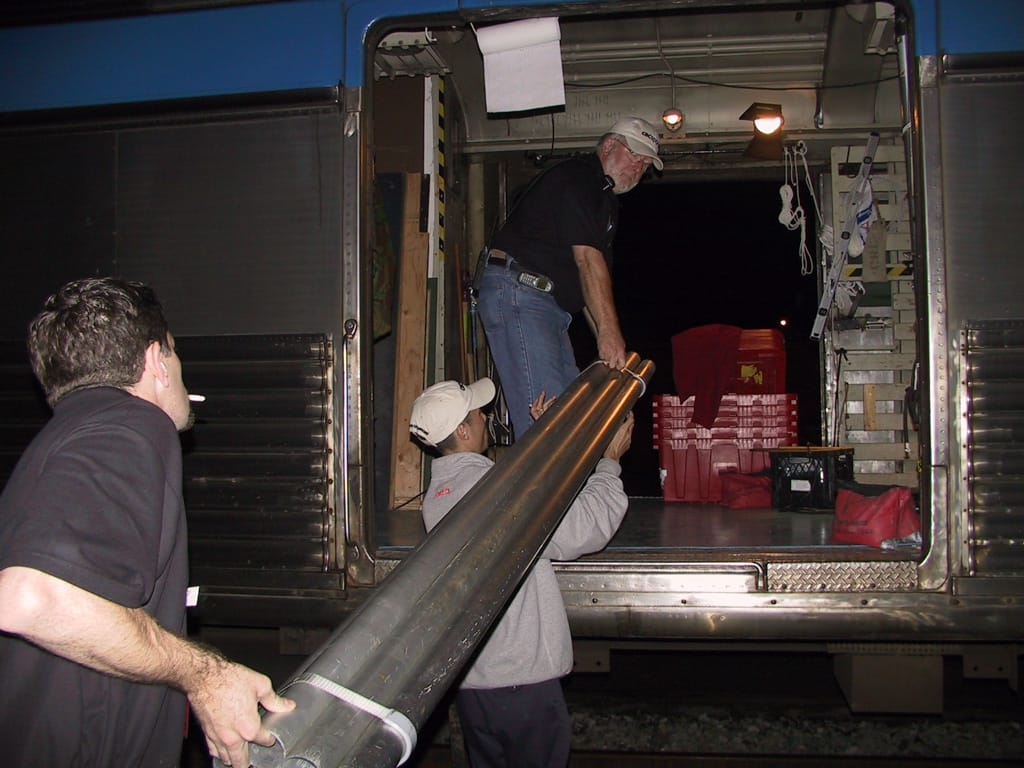 Even with our difficulties, we were headed for a new record for packing the train. Although the Boutique was already well away, packing up in less than two hours was still something to celebrate. Then the most stunning show of the Northern Lights sidetracked us. (The technical crew says that the lights in Biggar were better.) We stopped our heaving and shoving, and for the next half hour watched the celestial curtains flow back and forth across the sky. I know how the Northern Lights are formed, but that doesn’t take away one speck of wonder while watching them.

Our train was to leave at 22:30. That left us over an hour to visit Dooley’s next door. (Literally next door — the rear entrance of the bar comes out onto the station platform.) We talked about the fun we’ve had, the show’s we’ve done, and the people we’ve met. We didn’t talk about the three remaining shows. A lot of us want the shows to be over, but a few of us don’t want this to end. This train is about to reach the light at the end of the tunnel.

Three of the VIA staff were in Dooley’s with us, assumedly against rules. (I get the feeling the Service Manager didn’t know they were in the bar.) They signalled us a few minutes before 22:30, and suggested we settle the tab and get back on board. There were a few people who seemed to think we weren’t leaving on time. The train left at 22:30, as planned.

After weeks of negotiation and agreements, Daryl finally got the change to climb into the cab of #6403 to film our progress as we headed east. The whole process has been ridiculous, bordering on insanity. Daryl’s filmed in the cockpits of fighter jets while in flight — something far more dangerous that sitting in the cab of a locomotive. But VIA has their rules. It wasn’t until Montreal that wheels really started turning, apparently. Only now did things finally pay off. We climbed into the Skyline dome to watch "Lord of the Rings" on DVD. Several of the others climbed into their rooms, roomettes, and berths to sleep.

When I finally turned in, I rolled up my window blind to watch the passing vista. Like when we left Vancouver, it was pitch dark outside. But the sky was on fire — the Northern Lights made the heavens look like they were being ripped apart. The waves of light undulated rapidly, weaving in and out of each other, appearing suddenly and disappearing just as fast.