Monday, 30 September 2002
[This entry written by Geoff Sowrey, ©2002 Canadian Broadcasting Corporation (CBC). Text used with permission of CBC. The opinions expressed within do not necessarily reflect those of the CBC, employees, affiliates, or subsidiaries.]

Today is a travel day, but we didn’t leave Quebec City until almost 18:30. That gave us plenty of time to do the things we wanted to do, and hadn’t done the day before. For me, that was sleep in — the previous day had worn me out.

I was behind on my journals. Partly because I’d wanted to get away from a computer for a day, and also because I get easily distracted. (Trains, interesting cities, and shiny metal objects will do that.) After breakfast and helping Ivan with his email, I sat down for a few hours of solid typing and image manipulation.

It’s just dawned on me that you might not really know how I write a typical journal entry. It usually starts with a pivot event or two that happened during the day. If there was nothing particularly outstanding, then it’s a theme. If I’m really running short of something to focus on, then I’ll just tell the tale of the day. Hopefully, I’ll be able to punctuate it along the way with something interesting or humourous. I do like to set context, which is why you’ll often see historical content thrown in. Having taken pictures, I also have a visual record of what we’ve done, just in case that dusty expanse known as my memory doesn’t quite fit the bill.

Now that just covers half the problem — the text. (Well, not entirely. I also have to edit it, because things like this probably won’t make it into the official record.) I still have pictures to prepare. The easy part is actually preparing them — the hard part is selecting them. I take a lot of pictures — I’ve taken about 2,000 pictures already, and I’m far from stopping this trip. I’ve still got a long way to go. Once I’ve picked about a half dozen pictures, I run them through Photoshop, which has a couple of macros I built for myself. These resize the images automatically. Then all I have to do is connect to the Internet, and away everything goes to Toronto. Normally, it’s over the wireless system, but when the wireless doesn’t work, I use the hotel’s connection. In Quebec City, at least, I need only plug in the antenna.

Finishing up, I checked out of my room and put my bags in a holding room. I had no idea what I was going to do next — I I hadn’t really planned for anything else. I ran into Analisa and, Lisa in the lobby, who were going to Café Suisse, the restaurant we’d left early from last night. Not in the mood for a fondue, I wanted something else. As odd as it might sound, I wanted French onion soup. I had yet to find a restaurant that served it (which I found strange, in a stereotypical sort of way). Analisa wasn’t about to let me down, though, and asked the taxi driver ... in French. Analisa was determined to practice speaking French. The driver suggested I try the Café de la Paix.

I had passed the place the day before and had paid it no mind. A small, basement-level restaurant with an unassuming sign, it was easy to see how the average person could walk by. I started going over French in my mind, and tried to figure out what I was going to say. This made me a little sad, actually — 17 years ago, I had caught myself actually thinking in French while walking through Basse-Ville. Now I had to make a concerted effort to translate my intentions into passable French. I took my seat and examined the menu. Then it was time to make an order. The staff seemed more than willing to humour my poorer-than-highschool French. Soupe l’onion gratinee (the waiter had to check to make sure the soup was even available) et salade cesar, avec une biere Blanche de Chambly.

The soup was outstanding. Not too salty, and the onion wasn’t overpowering. A thin cover of bread and a thick layer of cheese helped the soup retain its temperature. It was definitely home-made (well, as "home" as a restaurant can get) — Lipton instant soup this was not. I’ve had lots of Caesar salads in my day. I’d even go so far as to almost consider myself an aficionado. I know a good Caesar when I have one. The salad now holds the number two slot of my all-time favourite Caesar salads, following my family’s. The beer I’d had before, but was perfect for this sort of meal. I was in heaven. The only thing better would have been to share the moment with someone close to me.

I was proud of myself. I made it through the entire meal, including compliments (at least, I hope they came across as compliments) without slipping into English. Then I got the bill. It wasn’t the cost that threw me — I had no idea how to ask to break a $20 bill into two tens. I went through every last scrap of remaining French education in my head. Aside from the hollow echoes of lessons past, I drew a blank. I broke into English. The waiter didn’t seem to mind at all, replying to me in French. I tipped heavily.

I wandered a little aimlessly, thinking I’d head up Rue Saint-Jean and seeing what I could see. Along the way, I found Marc, and Rob W. (freshly returned from seeing The Who in Toronto) on their way to an Irish pub. They suggested I tag along. It sounded more interesting than what I had in mind. (I’d already spent a large portion of the last day and a half on my own, and social interaction was far more appealing.) Gerry appeared across the street. The three of us called him over. Whether he was going to the same pub, I don’t know. The four of us walked into the pub only to find several of our comrades, already enjoying the ambiance. 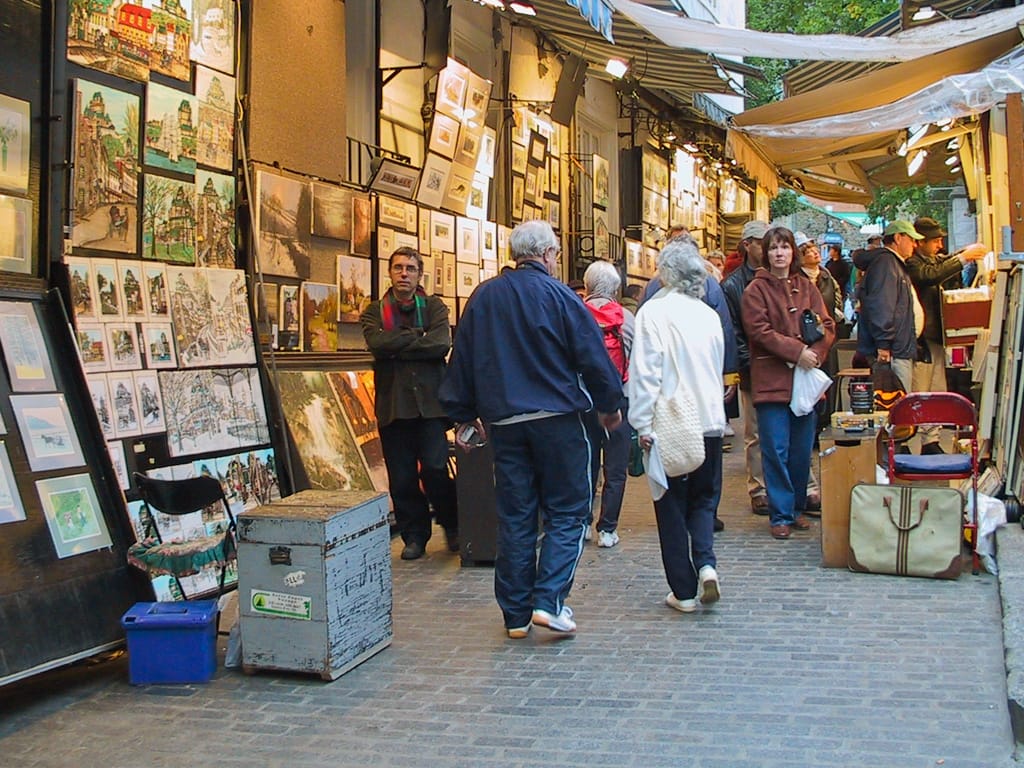 Duffy, Rob N., Bill S., Bill C., Tracy, Stefani, Emma, and Cliff welcomed the four of us almost like Norm had just walked in the door. It was a little peculiar trying to imagine that I was sitting in an Irish pub in Vieux Quebec. We could have easily been in any other city along our route. The only indication was a number of signs in French. We talked and drank well into the afternoon, until we realized that we needed to return to the hotel and retrieve our bags. Some took a taxi, but most of us walked. By then, we knew the city well enough not to get lost, and the walk wasn’t really that far. 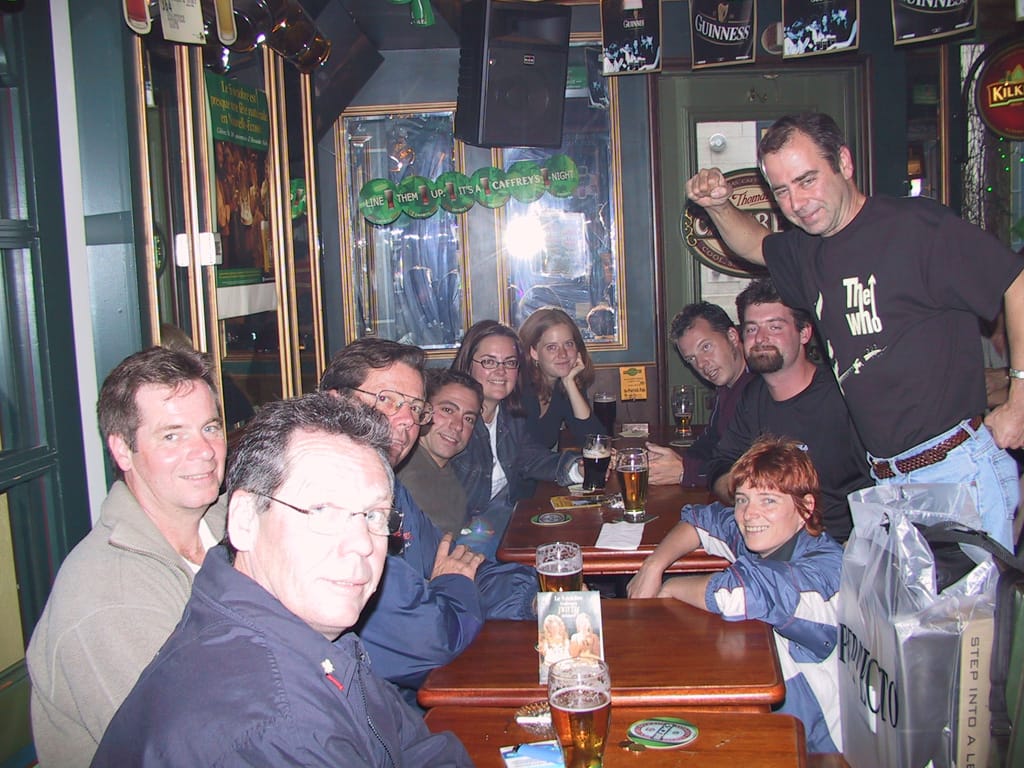 We grabbed our things from the hotel, hopped a taxi, and were soon back at the station. (Yes, the train station was closer to the hotel than the pub. But our bags aren’t exactly light.) We then played our favourite and most oft-played game, "Hurry Up and Wait". Our train wasn’t there, and couldn’t come in until after the 17:35 train to Montreal was gone. When the train did finally arrive, we were told we had 15 minutes to board so we could keep to schedule. VIA kept to schedule, now that the Renaissance train is no longer part of our consist.

As the train pulled out into the darkening Quebec City sky, rain was falling. Daryl was miffed because he couldn’t get a decent shot through the water-streaked windows. Rose and Colleen discussed the shocking news that Ron MacLean had not been re-signed for Hockey Night in Canada. (Though both had the opinion that this revelation was far from over.) Cliff and Trish almost dread Campbellton now — they don’t want to have to field "why didn’t you re-sign Ron?" questions.

Following dinner, we broke into small groups to watch movies. Some in the Banff Park watched "Planes, Trains, and Automobiles", some were supposed to gather in the Skyline to watch "Lord of the Rings" (but never did), and a couple of us took up shop in the dome of the Skyline to watch the director’s cut of "Star Trek II: The Wrath of Khan". We were at home again. For the next two days and three nights, our last on the train, we would live as we had started — on the railroad.

We were heading into New Brunswick, and our second-to-last province on this trip.