Sunday, 29 September 2002
[This entry written by Geoff Sowrey, ©2002 Canadian Broadcasting Corporation (CBC). Text used with permission of CBC. The opinions expressed within do not necessarily reflect those of the CBC, employees, affiliates, or subsidiaries.]

I haven’t been in Quebec City for 17 years. The last time I was with the Society for Educational Visits and Exchanges in Canada (SEVEC), in the summer following Grade 8. One of the great things about old cities is that they don’t change quickly.

Today was the event day at the Gare du Palais, Quebec City’s train station. Normally, this would mean an early start, a lot of work, and a teardown. But plans over the last few weeks had meant only a half-hour’s worth of work before, and maybe an hour’s after. This was now a Radio-Canada affair, and our team’s presence was not required. We ended up with an unexpected day off.

Once the official word came that we were not needed, our group disappeared to the four winds. Some went to Vieux Quebec, some back to the hotel, some to various other parts of the city. I immediately headed towards Chateau Frontenac. It’s a landmark I felt comfortable enough to branch out in search of familiar things. The tricky part was getting there. (Sans taxi, of course.)

For the first few minutes, I climbed hilly streets I did not recognize. I rounded bends and turned corners I didn’t remember. Then, at the end of one street, I spotted a McDonald’s. It was the first time I’d ever seen a McDonald’s without one of the giant arches, 17 years ago. I was getting close. 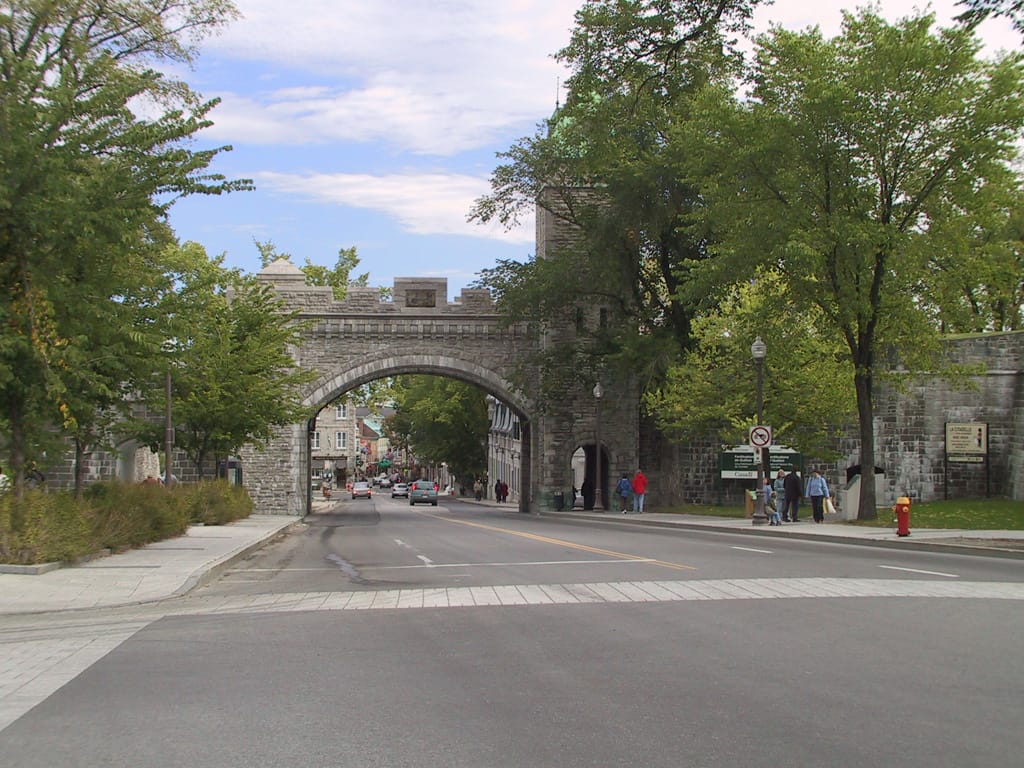 I turned more corners, and began to realize that my memory wasn’t as good as I’d believed. I knew I was in the area, but my recollection of where I was going proved to be fuzzy. I found an alley lined with the work of starving artists. Nothing really remarkable to see, but it sparked a faint memory. I quickly skirted around viewers and buyers. About five metres from the end, I slowed down.

A deep feeling, long forgotten, swelled out. It was like frost growing across a cold window, only warm and familiar. I was 13 years old, walking out of the same alley, meeting up with my friends in the square next to Chateau Frontenac. We were on shopping sprees in Basse-Ville, I was buying a kite in a store at the foot of the staircase, eating at the McDonald’s, running around the Plains of Abraham and looking over the walls of the Citadelle. I was listening to the Art of Noise, wearing all-white clothes, making my first (rather poor) attempts at dating. A youthful grin swept across me. 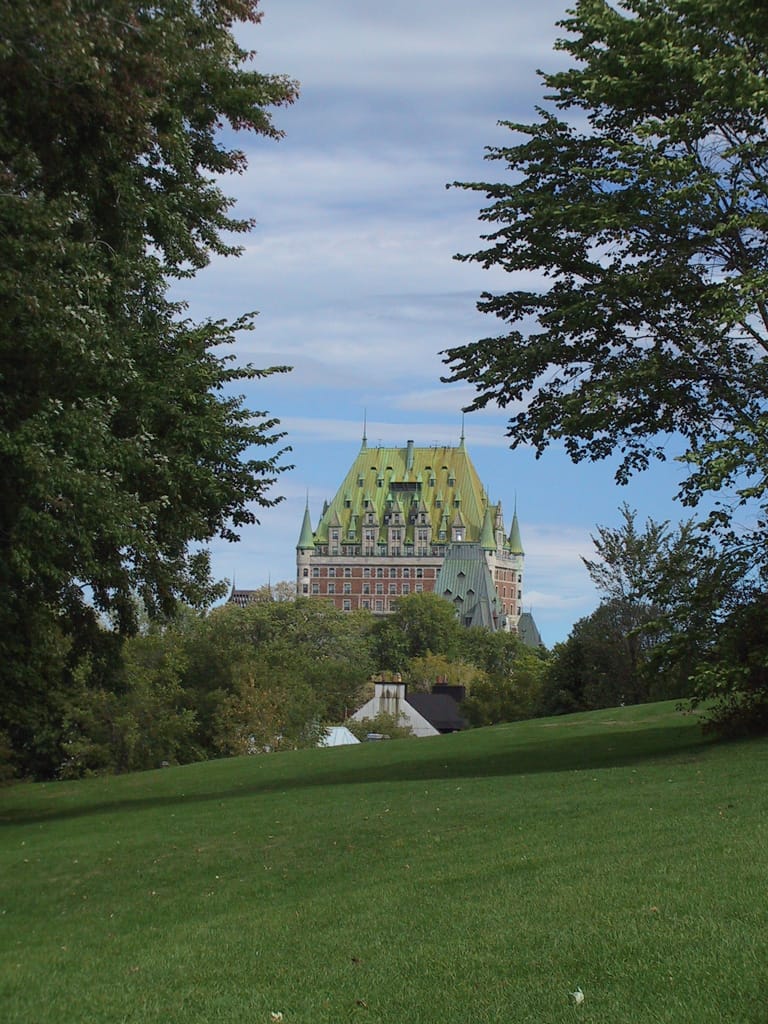 I knew where everything was, though I could name little of it. Down Terrasse Dufferin, up the stairs to the Plains of Abraham, around La Citadelle, over to the Parliament Builings, and through the St. Louis Gate. It was all familiar, and completely new. Seventeen years vanished, and I was discovering everything for the first time again. I decided I needed to visit La Citadelle.

Quebec City is North America’s only walled city. La Citadelle is its fort, and is the largest fort in North America. It’s also still an active military base, something I had not remembered. (You can’t just wander around it, like at Fort Henry in Kingston, or historical towns like Black Creek Village.) It was a quiet day inside the walls, as most of those on staff were either hard at work, or away for the weekend.

La Citadelle, although originally a French fort and (obviously) based in Quebec, is a British establishment. When the Wolfe defeated Montcalm at the Battle of the Plains of Abraham, the British took control of the fort, and greatly expanded it. Today, it’s North America’s largest. It is also one of the homes of the Governor General of Canada — a permanent residence is maintained for when Ms. Clarkson spends her time here in Quebec. (It’s mostly a political move so that the second-highest politician of the nation — after Queen Elizabeth — doesn’t show favouritism for English Canada.)

Leaving the battlements behind, I returned to the Chateau to head into the Lower Town (Basse-Ville). The stores and restaurants have changed (except the sex shop, which looks like the same one I’d seen 17 years earlier), but the landmarks were the same. While taking a picture of l’Escalier Casse-Cou, I heard my name called from below. I found Bill and Bill, enjoying beers at one of the restaurants on the stairway.

The tour took me through Lower Town, long the narrow cobble-stone streets, and slowly back up the hill. I rounded Université Laval, along the walls, and eventually back to the railway station. The event was in full swing, and I wanted to see what Radio-Canada was doing in our place.

The activity was high. Our tents were in front of the station, filled with Radio-Canada information, manned by Radio-Canada staff. The line to see the train ran from well inside the station, out the front doors, and up the garden path. The show outside was loud — cheerleaders and gymnasts cavorted to bad pop music. Daryl was filming, and seemed to have the same poor view of the show that I did. Radio-Canada had pulled together very little content — it almost looked like a high-school science fair. But everyone seemed to like it, so I guess it worked out in the end. 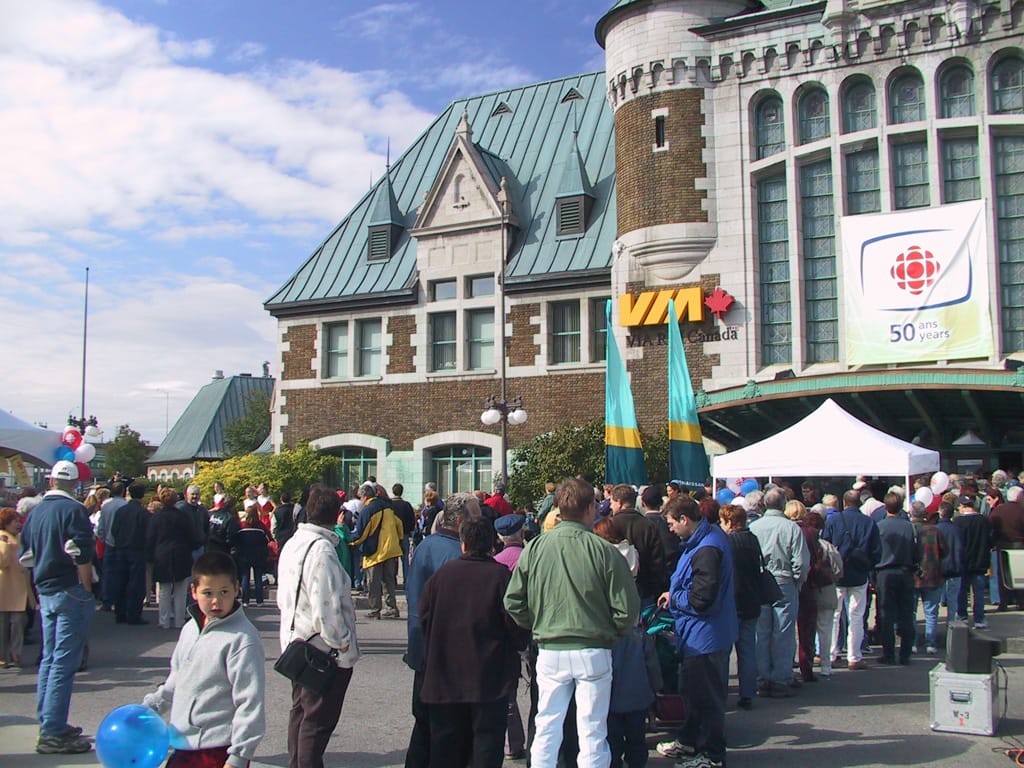 Inside, people waited patiently to see the museum. Out on the platform, VIA "entertained" visitors with loud music, smoke machines, and special lighting. It almost felt like a nightclub. This was the first venue, I think, where visitors didn’t really have much of a choice of where they went. It was carefully mapped out to go through the Renaissance cars first, and then through the museum. 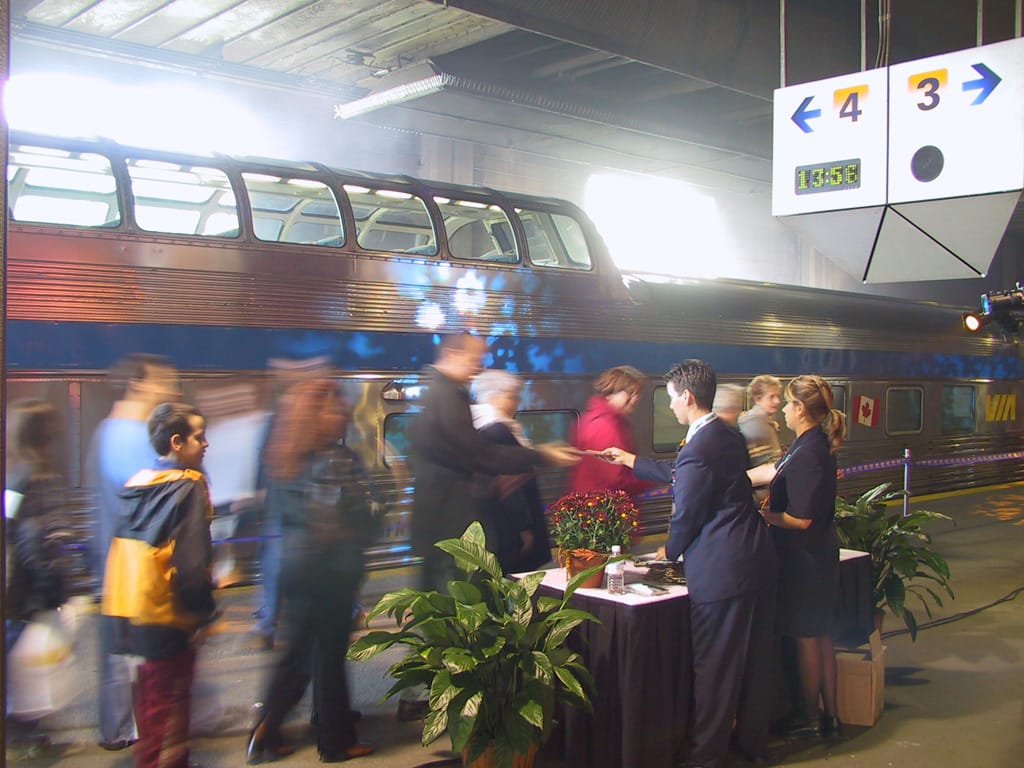 Neil, Julie, Analisa, Debbie, and Rose remained to help Radio-Canada. I only saw Neil, Julie, and Rose. They were unsure of the event, as none of them spoke French well enough to determine how people were enjoying themselves. (We later found out that the line’s length was due to how long people were spending in the museum. Most of our visitors have walked through in 12-15 minutes. Some of the visitors in Quebec City were reading everything. There’s a lot of text in that museum.) I saw only a few people leave the line and give up on seeing anything. 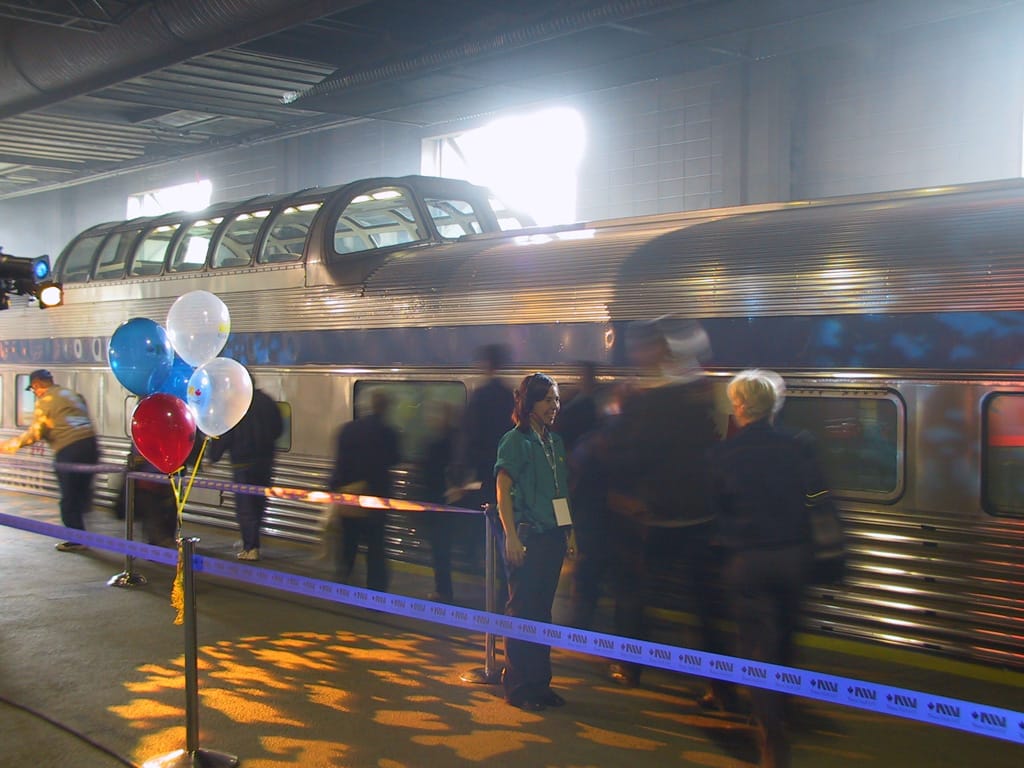 As I was available, I was quickly tasked with a simple job: take more ballots out to the information table, and a lavender pillowcase to clean out the now-full ballot box. The staff out front didn’t know who I was at first. I managed to explain I was there to help. The new ballots did a lot to support that. I emptied the ballot box, as the volunteers there were quite busy.

Several people started asking me questions. In French. I couldn’t understand a word. I felt ashamed. I took French in school for nine years. In those nine years, I never learned to carry out a full conversation without asking for help. Over a decade later, I could barely make out a simple sentence. One of these days, I’m either going to move to Montreal for a year, or maybe even Paris.

I returned to the hotel to ease my weary feet. I don’t know how far I’ve walked today, but it’s not a short distance. It’s been a while since my feet have hurt this much. After all the standing, walking, hauling, and what-not, I thought my feet would be conditioned to this sort of abuse. I ended up falling asleep for an hour. Quite enjoyable, I must say.

When I returned for teardown, the event was already long over, and the only thing left were the tents. The technical crew were already hard at work. Although the rest of the team has become quite skilled at assembling and taking down tents, it’s something else to watch the professionals. They make it look easy. Bill C. doesn’t even use the Magic Prybar (the tool the rest of us use to pop the tent canvas of the frame) — he pulled it out like someone would tighten shoelaces.

We packed up the tents and took them back to the baggage car. The stanchions and tables were already put away. Then it was off to dinner. Some went one way, others another. Several of us headed up to Rue St-Anne in Vieux Quebec for a Swiss-styled dinner. Neil, Emma, Analisa, and I stayed only long enough for a drink. We’d sort of already had an idea to go somewhere else, but thought we’d at least give the restaurant a shot. But the service and menu didn’t thrill us. We bolted for something more significant.

At the railway station.

We had hoped to meet up with others at Charbon, a steakhouse in the railway station. We ended up meeting up with Daryl, who had arrived well before us, and had mostly eaten alone. While the four of us ate our meal, Daryl enjoyed a post-meal chat and apperatif at an adjacent empty. Marc, Tracy, Trish, and Cliff appeared later on, but sat away from us.

After dinner, most returned to the hotel before heading out onto the town. I returned to Vieux Quebec. I wasn’t about to let a perfectly good night go to waste. Not when there were photographs to be taken. (Can you tell I’m a little obsessed about photography?) Following a route similar to this morning’s, I circled the old part of town. Tourists were in bed, as were the locals. I saw no more than 20 people the entire time, and perhaps no more than 35 cars. 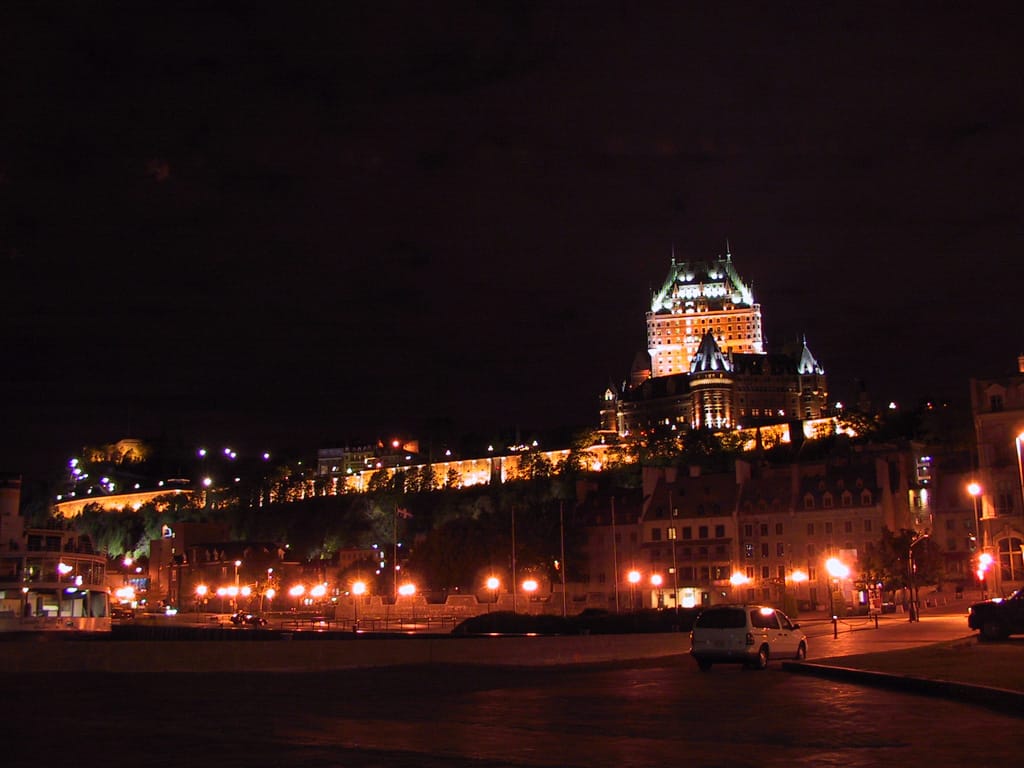 I finally had to pull myself away and return to bed, close to 02:00. As much as I love this city, I didn’t want to stay up all night.