Saturday, 28 September 2002
[This entry written by Geoff Sowrey, ©2002 Canadian Broadcasting Corporation (CBC). Text used with permission of CBC. The opinions expressed within do not necessarily reflect those of the CBC, employees, affiliates, or subsidiaries.]

Were it not for banging pipes in the ceiling (I wasn’t the only one who heard them while at that hotel), I might have slept in longer. As it turns out, the noise got me moving a little faster, giving me more time in the day. We weren’t leaving town until after 17:00, which meant lots of time for us to see Montreal.

The technical crew (except Rob W., who was back in Toronto taking his kids to see "The Who") left early this morning for Quebec City. They’re helping out with a broadcast using the tents we’ve been carrying in the train. (A Radio-Canada truck drove the tents out last night.) So today, it’s just the production staff.

Most of us had saved money to spend in Montreal. No longer Canada’s largest city, it still reigns as the fashion capital. It seemed everyone wanted to go shopping. Well, except me. Today was my day to be an outright train geek. I intended to spend the day out of town, in Delson/St. Constant.

For railfans in Canada, Delson/St. Constant is almost a kind of Mecca. It’s the home of the Canadian Railway Museum. Some of Canada’s most famous pieces of railway history are preserved there, awaiting discovery by the rail-curious. Ever since getting involved with the railway community, this was a trip I’ve wanted to make. When I was granted the honour of assisting with the CBC 50th Anniversary VIA Rail Train, and the schedule permitted, visiting the CRM became a personal priority.

Getting out to Delson/St. Constant was a challenge. It’s a bit of a distance out of the city. The "Museum Train" didn’t seem to be running, and public transit is completely out of the question. Naturally, I figured on a rental car. The nearest rental outlet, a Budget, was cleaned out. Calling around, I found nary a rental car was available in Montreal. That meant only one thing: a taxi. Worse still, my driver didn’t know where St. Constant was, nor had ever heard of the museum (admittely, not entirely unsurprising). And the CRM’s website had a vague map, but no details. (It turns out that the map is surprisingly accurate.)

A taxi ride from downtown Montreal to the distant outskirts is about $40. And that’s travelling on highways, with me navigating from the back seat. The museum itself is not visible from Route 209 in St. Constant. The only indication is Old Sydney Collieries 2-4-0 #25 that sits next to the road. A little further down is a sign that provides the real clue. Follow a short dirt road, round a corner, and the transplanted Hayes railway station comes into view.

I stopped at the ticket booth to purchase admission. The clerk cheerily said that admission today was waived for some cultural event. I’m not entirely sure what that meant, but free is always good! I headed on in, and made a beeline for the main station house and information centre.

Founded in 1932, the Canadian Railroad Historical Association is Canada’s oldest and largest historical railway organization. In 1950, the group took possession of its first piece of equipment, a retired Montreal streetcar. Nine years later, there were enough artefacts to open a museum. The Canadian Railway Museum was founded in 1961, and opened its doors in 1965. Currently, the CRM is working on an expansion called ExpoRail, which will provide a greater interpretive experience for those visiting the museum.

The museum currently consists of a large rail yard, ringed by an electrified rail for streetcars (they circle the museum, offering patrons rides). There are two stations at the museum, Hayes station near the entrance, and Barrington station at the opposite end. It is with some interest that I discovered that the Hayes station is named for, you guessed it, Charles Melville Hayes. The same guy whose middle name gave Melville, SK its name. The railroading world is a small one ... and thankfully, without the singing dolls. Obtaining information at the information centre in the Hayes station, I quickly hustled down to the Barrington Station for my tour. The group also consisted of a model railroading group from Kingston.

Our tour took us only through the locomotive house, which was pretty much all we wanted to see. I had hoped that the guide would have extensive knowledge on the locomotives, where they came from, how they got here, and an interesting story or two behind them. The tour guide, sadly, wasn’t terribly knowledgeable in railroadiana. She knew the items we were looking at, but history beyond that, or of other items in North America she knew little. The modellers and I frequently added in extra information. (I frequently corrected not only the guide, but also the modellers. It scared me to realize just how much about trains I’ve learned in the last year and a half.)

The tour over, I returned to taking pictures. In the locomotive house are some of Canada’s most famous steam locomotives, including CN 4100 (the first locomotive the newly-formed Canadian National Railways ordered, and the last Santa Fe type steam locomotive remaining in Canada), CP 2850 (the original Royal Hudson that towed the Royal Train in 1939), The Flying Scotsman (donated to the Dominion of Canada in 1937 by Britain), and CP 5935 (one of two remaining Selkirks, the largest locomotives ever used on Canadian rails). It’s a steam buff’s paradise. There were also two vintage diesels in the house: CN 77 (CN’s first diesel electric, and possibly the oddest locomotive I’ve ever seen), and CP 8905 (the last remaining "Trainmaster" locomotive in the world). 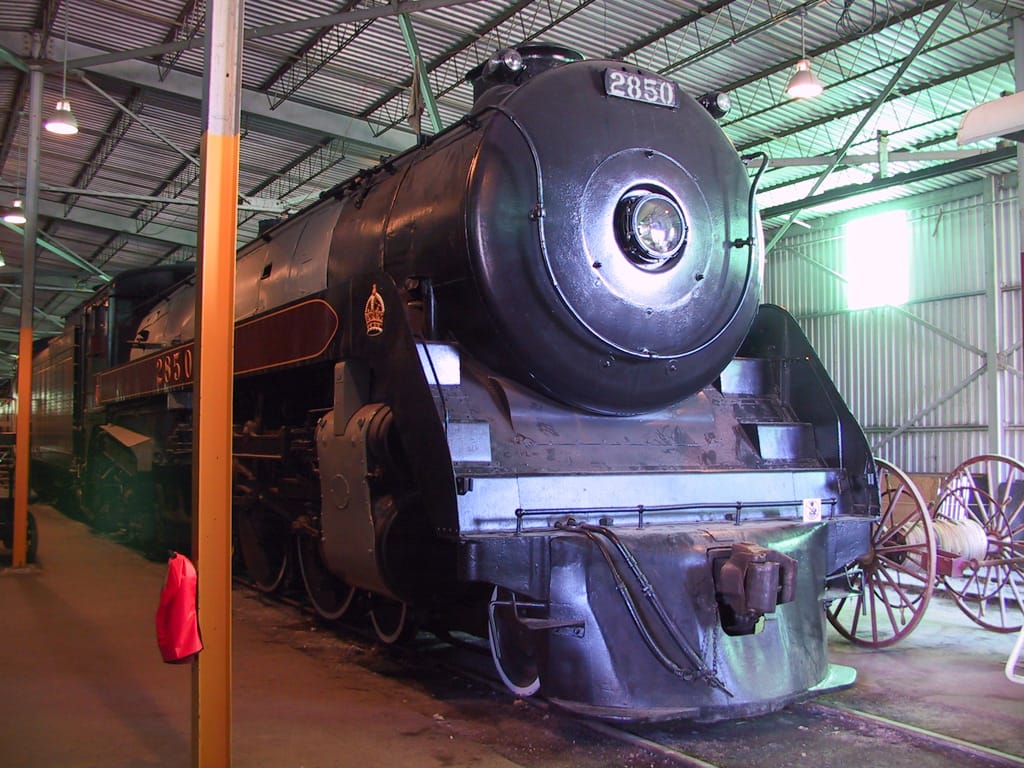 I wandered around the yards, taking more pictures of equipment sitting in the yard. More steam locomotives sat out there, along with the majority of diesel electric locomotives. The diesels were mostly in good shape, a few that need restoration. I had to be a little watchful while walking around — the museum was running an active steam engine, a replica of the John Molson, back and forth on one of the open sections of track. (Most avid steam fans in Canada don’t really regard the John Molson as a part of the collection. It is a replica of the original, built in 1970 for use at the museum. I’ve heard it referred to as a "toy".) 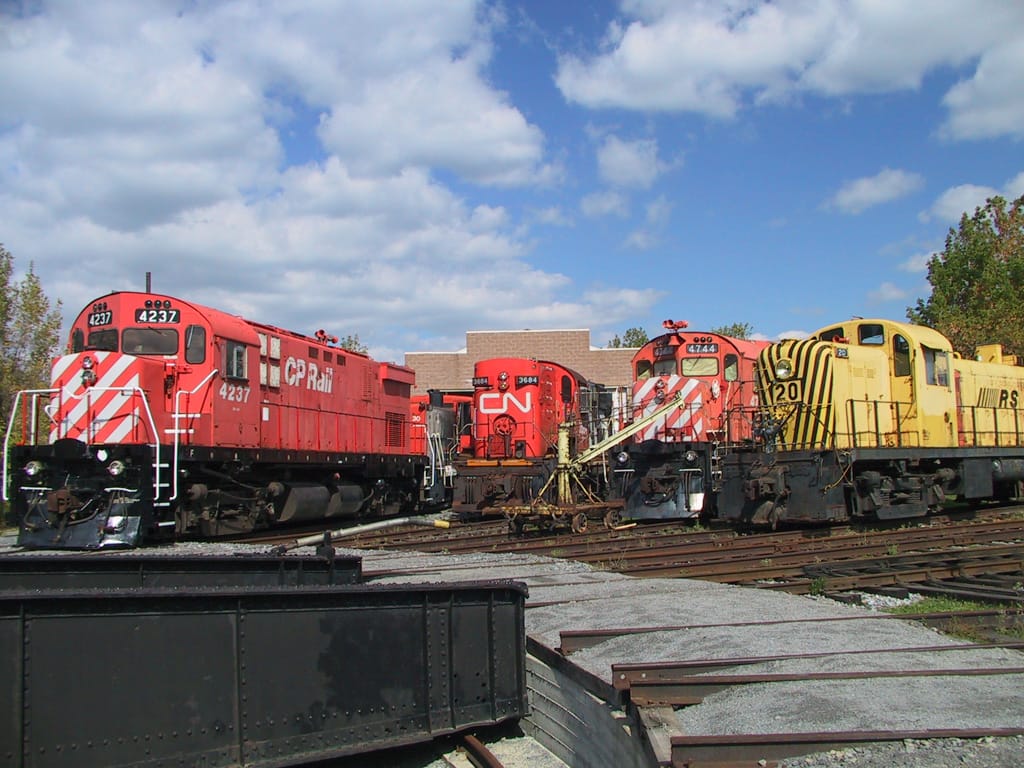 Most of the museum’s collection is in good order. Some of the items need painting, some a serious overhaul. Some other items in the collection, sadly mostly steam locomotives, are harder to look at: they are decayed, and probably barely salvageable. They sit in a nearly-hidden side track, down a path marked with a forbidden entry sign. It’s sad to look at these once-proud machines, knowing that with funding they could have been saved.

As I wandered, I learned that today was an auspicious day for the museum. According to the modellers (I kept running into them), in addition to it being a cultural day, there was a large announcement at 14:00. Luckily for me, that fit almost exactly into my schedule. Well, it ended up fitting into my schedule. Originally, I didn’t think I’d be able to stay that long without becoming bored. I suppose trains are pretty good at keeping my interest.

If any press attended the speed, I couldn’t tell. As most of it was in French, I also don’t know exactly what was said. I do know enough French to get the gist. Today was the official launch of a new book written by and for the museum. It’s a collection of portraits and text about the museum’s collection. As soon as the speeches ended, the book went on sale in the giftshop. I bought the first English copy.

I called my cab (the driver had given me his number), and waited for his arrival. This game me ample time for a snack (an ice cream cone — all I could find), and read my new book. Returning to Montreal, I had the taxi driver drop me off on the waterfront, near the entrance to the Lachine Canal. The sunlight cast wonderful shadows on the massive concrete grain elevators, and the rust on the metal portions exhibited classic industrial decay. And I wanted pictures. 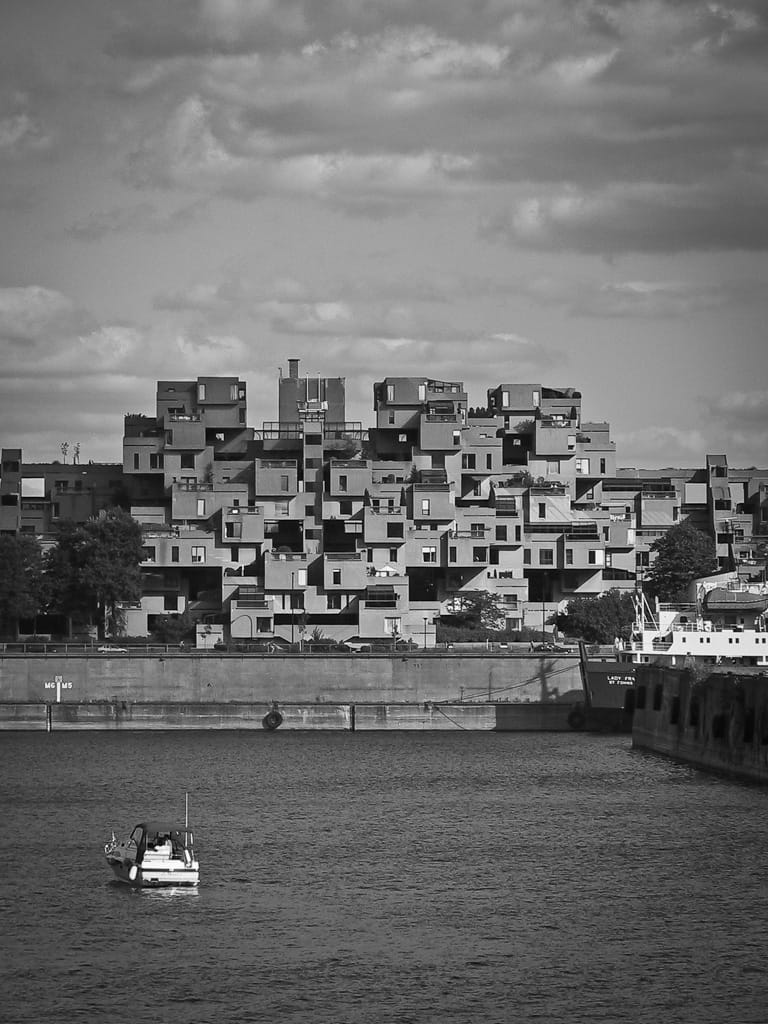 Near the mouth of the canal was a large inukshuk. Unlike normal ones, this was made from ... well, I don’t actually know. It’s hard to tell. It looked like a large wire mesh that contained peat moss, with grasses and small plants sprouting from all over. I can only assume that this was the original intention. Walking down towards the hotel, I found an old tugboat that had once plied the waters. An excellent black and white subject. I ran into Daryl along the way, returning from an excursion of his own around Montreal. He was off to find an external hard drive for his computer. I continued taking pictures almost until I got back to the hotel.

We congregated in the hotel’s lobby. It seemed everyone except me had gone shopping during the day. I get the feeling many of us will be mailing packages home just so we can zip up our luggage.

Around 17:15, when we departed for VIA’s Montreal Maintenance Centre. This was also when we ran headlong into traffic. Why the traffic was so heavy downtown Montreal on a weekend escaped us. But we had to escape it. The train would leave without us if we didn’t arrive on time.

I would love to have given everyone on our trip a GPS transmitter so we could have plotted the cabs. I can only imagine the scene of half a dozen taxis bombing around the city streets, weaving in and out of traffic, travelling a labyrinth of side streets. We all eventually merged back together as we arrived at MMC.

Our last VIA crew was there, waiting for us. We’ve had three crews already. Some long lived (Vancouver-Winnipeg), some very short (Winnipeg-Toronto). We were greeted with cards left on every berth and on every door. They are certainly off to a great start!

We pulled out of Montreal, watching the glowing skyline as we crossed the Victoria Bridge. We didn’t want to leave — Montreal is far too exciting a city to stay for such a short time.

The trip from Montreal to Quebec City was fairly brief. We arrived around 23:00, pulling into the Gare du Palais. It was a much faster arrival that previous stops. Probably because we didn’t split the train or do anything else fancy. We just wanted off. Grabbing our bags, we headed off, yet again, to a hotel. All these hotels are beginning to weigh on us, I think. There is a certain consistency to our train bunks.

We had to wait a long time for a cab. When one finally showed up, one of the priorities was to get Stefani in it. She was carrying Bill C.’s insulin, which he’d accidentally forgotten on the train. A few mildly concerned phone calls during the day had given us the impression that he needed his medicine quickly. As we drove, we spotted the technical crew walking back from one of the local bars. Bill didn’t seem as relieved as we’d expected.