Friday, 27 September 2002
[This entry written by Geoff Sowrey, ©2002 Canadian Broadcasting Corporation (CBC). Text used with permission of CBC. The opinions expressed within do not necessarily reflect those of the CBC, employees, affiliates, or subsidiaries.]

We came. They saw. It rained.

I’d been looking forward to the Montreal event. This is a great city to be in, and I was sure lots of people would come out. We were so certain of ourselves that there was nothing that could dampen our spirits.

Except the remnants of Tropical Storm Isidore.

When we’d set up this morning, we were prepared for rain. We all knew it was going to rain. The precipitation forecast was at 100%, and the predictions were quiet accurate. We laid down tarps, hung the tent walls, Roger even went out and purchased two large bags of disposable ponchos. We planned the whole day around it raining. And for a time, we were wholly successful.

Je ne suis pas bilingue, and I’m not the only one. Luckily, this was well-known ahead of time. Our local organizers provided fully bilingual volunteers, and the Archives staff who’d come to Ottawa came out again to run the show, for which I’m eternally grateful. When we arrived this morning, Radio-Canada arrived armed with signage, posters, and French-language video tape loops aplenty. (We gather the signs were very hastily made after Radio-Canada saw all the English signs in Ottawa, the batch finishing sometime early this morning.) In fact, there was so much help that once we’d set up the tents and equipment, we had little else to do.

Some of us, like Cliff, even got kicked out of our own tents.

Our set up this day was in Vieux Port ("Old Port"), the old shipping port on Montreal’s waterfront. Some shipping (mostly passenger) still runs out of here, but mostly it’s for touring and viewing the river. A freight rail line still runs through the area, which is what our train sat on. We were warned to look for trains, but never saw one the entire day. 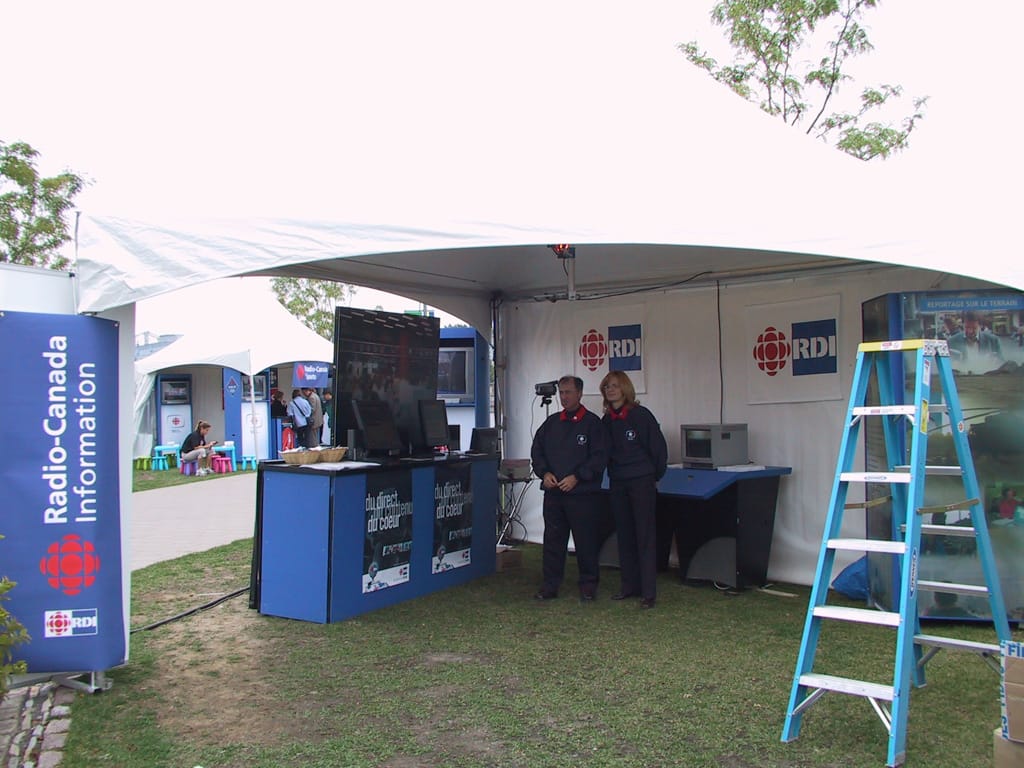 The schools arrived early, as expected. Into the museum, and around through some of the tents they went. Organized and quiet, I saw little of them — I’m not even sure they came by the Nouveau Média tent.

The buzz on the walkie-talkies soon turned to Sheila, specifically Heritage Minister Sheila Copps. I had expected to see her in Ottawa. Instead, she made her appearance in Montreal. Her first visit was to the museum, as expected. I hovered around outside, waiting for a chance to take a picture. Ms. Copps travelled with an entourage that was a little difficult to shoot around, but not impossible. I followed her from the train to the Children’s tent, to the New Media tent, over to the Boutique, then through News (although I couldn’t get a decent angle for the picture), and finally to Sports. I didn’t bother with the radio interview. 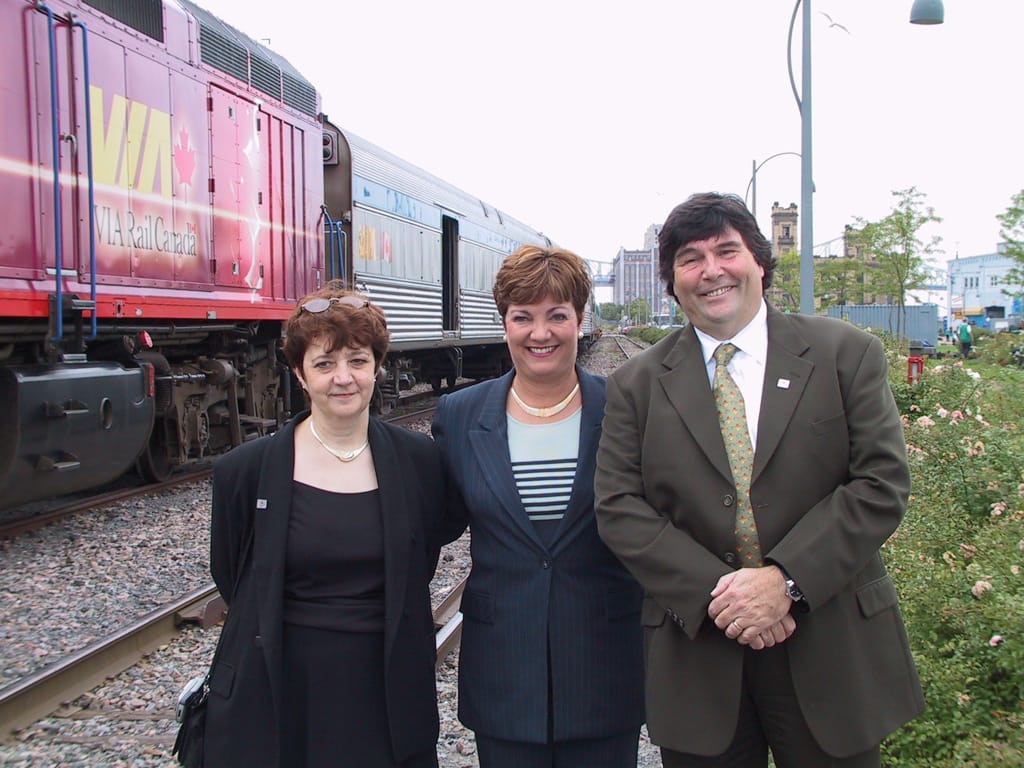 I must say that Ms. Copps’ ability to speak French is impressive. For a Hamiltonian who used to do an excellent job of riling southern Ontario, she’s become a very respectable politician ... if there is such a thing. She spent a lot of time talking with our staff (although I think it was limited mostly to Ivan, Patrick, and Amy — the local organizer steered Shiela from certain tents quite quickly).

Light rain was falling by the time I got back to the New Media tent. It wasn’t yet something to worry about, just something to watch. We did partially close one of the walls as a precaution. The writing was on the wall, though — rain was coming. It was just a matter of time.

The Radio-Canada staff and volunteers were running the tent like they’d been with us from the start. (Not that there was a lot to do, however — we weren’t exactly overwhelmed with visitors.) Like most of the others, I had little to do. Most of the people coming up to us were Francophone, and they wanted to talk to Francophones. My French is too poor to be of use, so I kept my distance. No-one seemed to mind.

The downside of not speaking the language was an inability to obtain feedback. Normally, I’ll talk with visitors and hear what they liked and disliked. I felt quite awkward asking Radio-Canada staff questions in English, let alone our guests. I was able to learn from others such as Ivan that those who did come were thrilled with the presentations.

The ground that the Boutique sat on was turning into a pond — the water pooled almost right under the tent itself. Though the merchandise on the counters were fine, the stuff in boxes was getting more than a little damp. In what would be their shortest stint out in the open, the Boutique closed before lunch, and everything packed and put back on the train. They would not be the last tent to go down.

Lunch was another problem. (VIA wasn’t with us today ... well, our crew wasn’t with us. The Renaissance crew was out, but we rarely saw them during the show.) Analisa improvised and ordered from St. Hubert. She described it as "Swiss Chalet, but French". That, it ain’t. It’s food, and I wasn’t about to complain. There was the issue of the order, though — specifically, how long it took to arrive. It was almost like a comedy of errors. Analisa placed the order, and we expected delivery. About 30 minutes later, we heard over the walkie-talkies that a guy in a chicken car was at the front entrance. He wasn’t delivering, though — he was comfirming the order. Another three-quarters of an hour pass, and finally the delivery arrives. Well, sort of. Someone reported that the chicken man was back, but then no-one could find him. The walkie-talkies started squaking and running afowl of chicken jokes.

During one of my stints in the New Media tent, an unfamiliar face introduced himself to me — Koceila, my new tent partner. Koceila was with the Radio-Canada Archives project, and would be running out the remainder of the trip with us. Koceila is Franophone, which is something I’m ecstatic about. Quebec City, Campbellton, and Moncton are either Francophone, or bilingual. I can’t handle that on my own. And like I’ve said before, I need someone who is passionate about the Archives site.

Koceila would not be joining us today, though. All he came out for was to install his visual aid into one of the laptops (Koceila has a slight visual impairment — the aid magnifies printed text with the use of a hand-held scanner). For the previous week (since about the 21st), we’d been trying to find out what laptop Koceila was supposed to be using. Brenda was not aware of any extra laptop for Archives, nor was I. The mystery was eventually solved when Analisa announced it was hers. So I let Koceila and the technician he brought loose on the laptop to install a PCMCIA card and the optical reader. An hour later, the two had to give up. Our laptops are all Windows 2000, and the drivers for the reader are Windows 95. Koceila said he’d get along without it.

Just after noon, Isidore paid a visit to Vieux Port. The rain fell harder, and things that had previously been dry started to get wet. The partially-closed wall in New Media was sealed shut. Other tents drew walls as needed. The Children’s tent put the mural away for fear of damage. (It later came back out under shelter.) 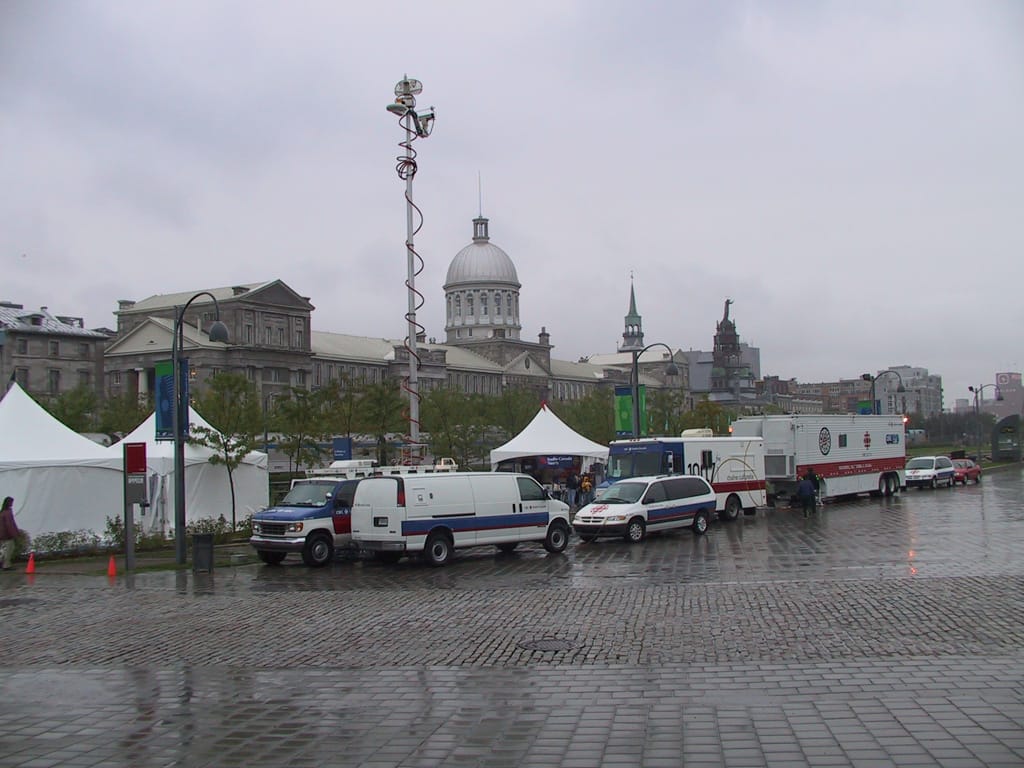 People kept coming. While I spoke with none, the Radio-Canada staff made them all feel welcome. Giveaways always seem to bring out the best in people. That, and dry shelter, which is what the tents offered. Many patrons lingered longer than in most places. I somewhat doubt the possibility of keen interest. The Archives site remained the big feature, as expected. Of course, that was on the "open side", so was also easiest to see.

The rain continued to fall. Debbie came around asking what state the New Media tent was in. I wasn’t worried, at least not aloud. The water concerned me, but the event was going too well to stop it. I couldn’t help notice the mud along the edges of the tarp on the ground, and new that it would eventually start seeping under the tables. The computers would be fine — they sat on top of their packing boxes. But the cables were exposed. I’d put them on top of a crate earlier in the day, though that really didn’t matter. Water and computers don’t mix. 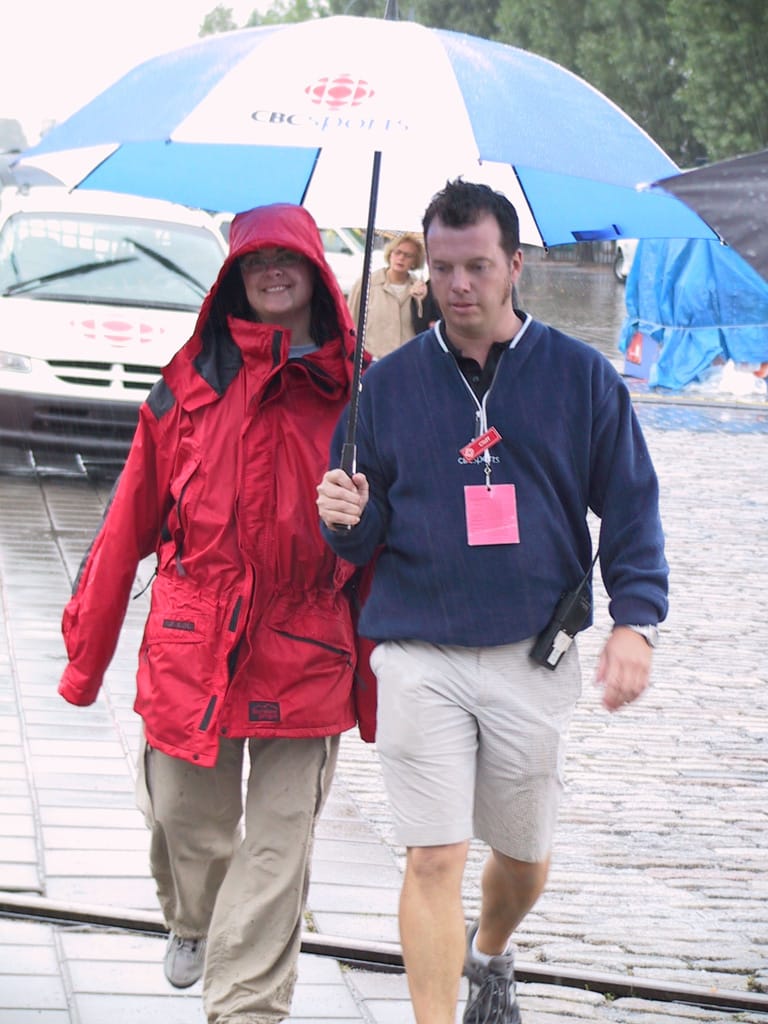 By 15:30, it was officially over for New Media. Water was now almost under the tables, and there were no signs of the rain letting up. The call came over the walkie: "Strike New Media". While I wasn’t happy about it, I knew there was no choice. Daryl appeared in the tent only moments later to get my reaction on tape. I think I was polite. (I was frustrated, but not by any decisions that were made. It was the weather I didn’t like.) By the time the last computer was loaded back on the baggage car, water had crept under the tables.

Shortly after New Media started coming down, the other tents shut down. By 17:00, the tents were coming down. By 18:30, the only thing left standing was the New Media tent. Canada Now had appropriated it for a broadcast (which required four of us to carry it, fully assembled, through a garden to put it into place. Only the museum cars were still open.

We were soaked. Not quite as bad as Windsor, but it was a deeper soaking — sort of like leaving really dirty dishes in the sink overnight. We were cold, wet, and wanting to go back to the hotel. Once the last tent was down, just after 19:05, and the last of the items packed back in the cars, we broke for a hot shower and dinner.

Some took a taxi, but a fair few of us wandered through the rainy night back to our hotel. It felt so good to peel off the layer of wet clothes. My shoes popped off like suction cups. I almost instantly climbed into a shower that ran a good 10 degrees hotter than I usually can stand, just to restore the heat in my body. A warm, dry change of clothes certainly helped. I also had to dry my soaked shoes, as I didn’t really have anything else suitable to wear. (It’s amazing what 20 minutes with a hotel hair dryer can do.) Those of us heading out that way piled into cabs and disappeared into the night.

Next up on the table was dinner. Rose suggested we hit a restaurant that let you bring your own wine, a fairly popular concept in Montreal. I don’t fully remember where we ended up. It was an area of town with a lot of neat little restaurants. Definitely not a heavy tourist area. We each purchased a bottle of wine at a nearby depanneur (I could already feel a hangover coming on), and headed to our restaurant. Rose almost immediate suggested we leave — this was a restaurant she knew too well. We went to the one across the street. There were a fair number of us (those that I can recall include Neil, Julie, Rose, Roger, Emma, and I think Analisa), but we were the only ones there. Fine with us.

Isidore left town before midnight. With the rain gone, Montreal glistened like a gem. It could have been perhaps our best event, were it not for the weather. It’s days like these when I wish we had more than one public event in each city.