Thursday, 26 September 2002
[This entry written by Geoff Sowrey, ©2002 Canadian Broadcasting Corporation (CBC). Text used with permission of CBC. The opinions expressed within do not necessarily reflect those of the CBC, employees, affiliates, or subsidiaries.]

Today was a travel day. It seems a bit odd, since Montreal is so close to Ottawa. But that’s the schedule. We weren’t about to complain. After an 18-hour marathon event yesterday (getting up to going to bed, that is), a day in travel was something to look forward to. Especially when we get to travel during the day.

Arising earlier than needed, I took the opportunity to wander around Ottawa, specifically the Parliament Buildings. Having lived in Ottawa before, I’d been to Parliament Hill many times. I needed pictures for the website, and also for myself (you never think to do tourism in the city you live — it’s not until you live somewhere else that you wish you had pictures). Clear mornings are the best for catching colour. 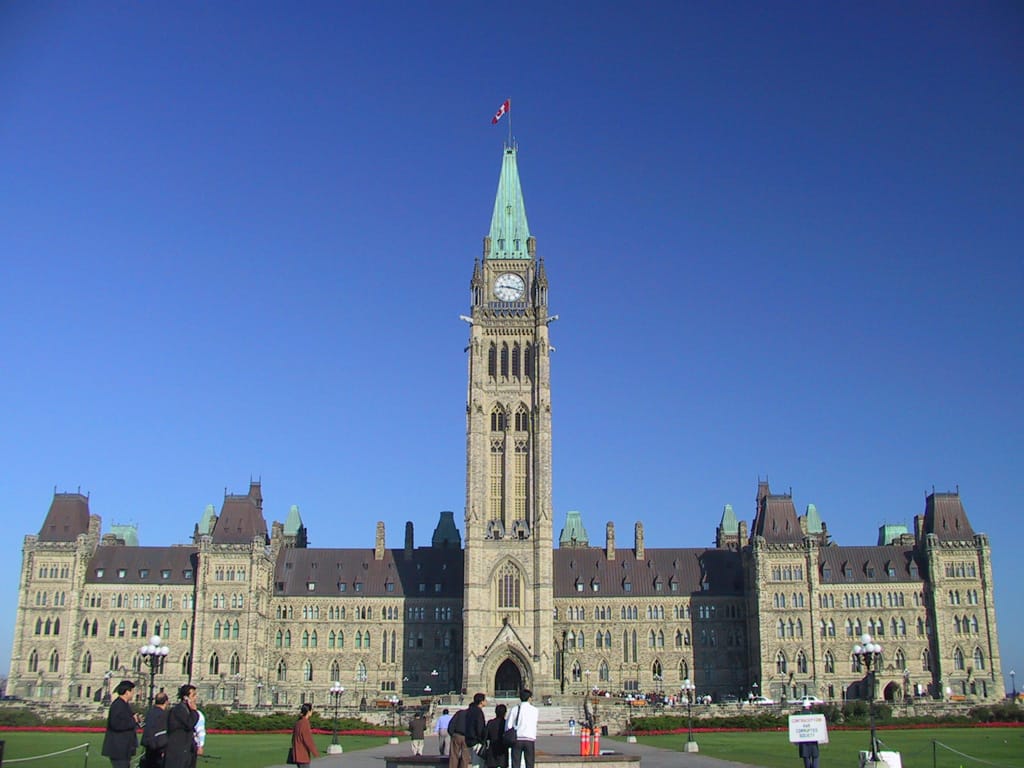 I got my requisite pictures of the Parliament Buildings, and proceeded to wander around. My original plan was to go around back, shoot the library, and maybe across the river. But as I rounded the West Block, I spotted something I’d never seen before.

In a fenced-area area off to the west side is something called "Stray Cats of the Hill". Since the 1970s, cats have lived in protected seclusion, in a custom-built dog, er, cathouse. (I suspect the current cats are either descendants of the original stray cats, or are new additions.) Today, the "Catman of the Hill" maintains the house and feeds the animals (it is in no way associated with the Federal Government, in case you’re worried that your hard-paid tax dollars are going to the dogs, er, cats). An interesting thing to find while prowling the Hill. 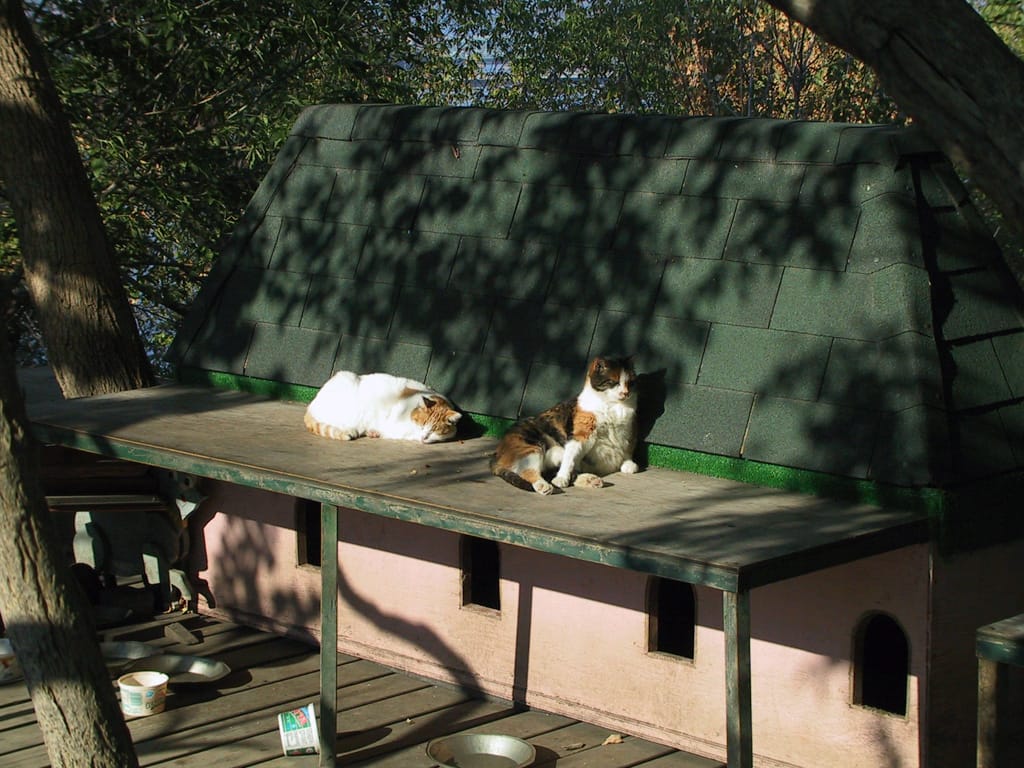 Heading back to the hotel, I managed to catch the Supreme Court of Canada building in perfect morning sunlight. The only thing that would have made it better would have been if the roof had corroded enough to turn green. Replaced only a few years ago, the copper roof had only turned a dark brown. The green won’t show up for a few more years still.

We headed over to the train station at 10:30. There we had to wait for our train to become available. I asked John when we could get on, and he replied that there had been a minor complication with the train, so we were a little late. I was curious to know. At first, he wouldn’t say, but it doesn’t take much to get one railfan to tell another railfan what was going on. Apparently, someone had accidentally left the brakes on the P42 (#907) when returning from the museum during the night. The wheels were gouged, making the engine incapable of travel.

Somehow, I considered this poetic justice for the grief VIA had wrought on us since the Renaissance Train had joined us.

We boarded the train at Ottawa’s VIA Rail station around 10:45. We would not depart the station for a little over an hour, assumedly waiting for clearance on the track. As we started onto lunch, we began our journey to Montreal. Less than 10 minutes out of Ottawa, we heard the following announcement:

"Ladies and gentlemen, the helicopter is now overhead. You can obtain a clear view of it through the Skyline dome." 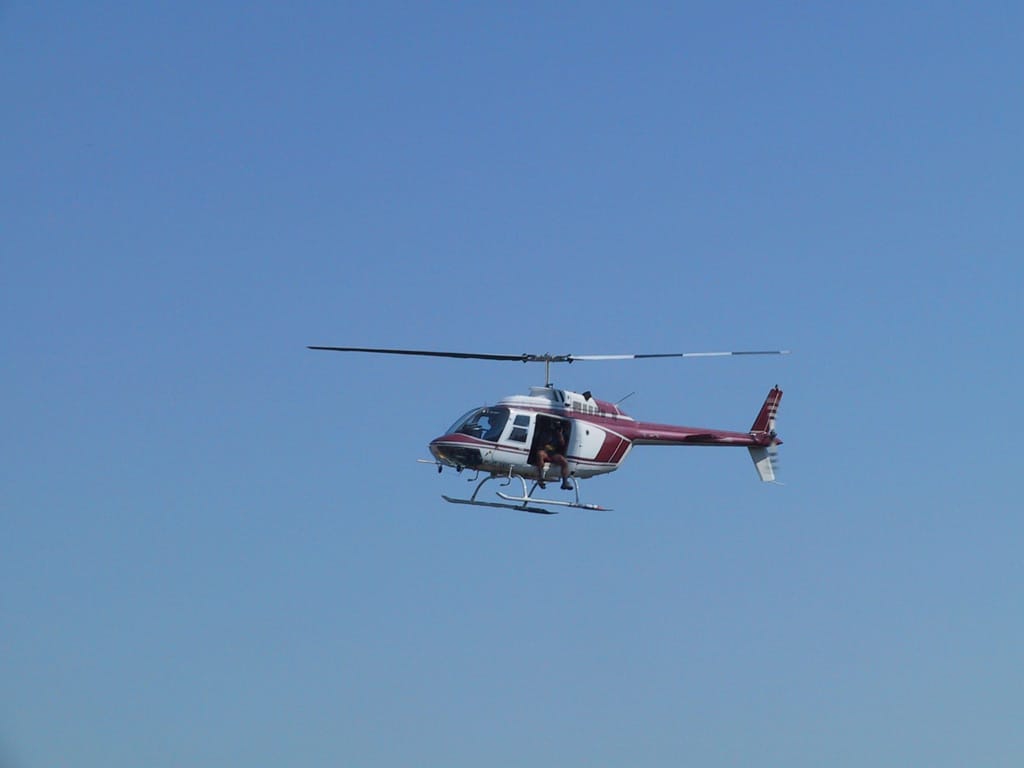 Originally, Daryl was to shoot from the helicopter himself. He had asked me if I’d like to come along. (Actually, it was more of an assumption than an inquiry.) Due to problems getting from the helicopter to the train, and due to cost, an Ottawa CBC camera operator flew in Daryl’s place. I am a little disappointed that I didn’t get a chance to go, either.

We covered the short distance between the two cities fairly expediently, arriving in Montreal roughly on time. (I can only assume we made up the time as VIA wasn’t really interested in getting us any more ticked off than we already were.) We had to run out onto the Victoria Bridge over the St. Lawrence River, before backing into the VIA’s Montreal Maintenance Centre. Our event tomorrow needs only part of the train, so some will be left behind here. The rest will be taken down and arranged for us. (I assume it’s too awkward to take our entire train to the Montreal station.)

Our train parked next to the American Orient Express, a very pricey luxury cruise train that makes curcuits of Canada and the United States. The cars on the train are similar in vintage to ours, but underwent an extensive (and expensive) refit to make them some of the most luxurious ever to ride the North American rail system. But even with all the glamour, I’d take our train in a heartbeat.

Piling into a line of awaiting taxis, we headed to our hotel in Montreal’s Chinatown. We had a few hours to spare. We also had few rooms to check into — most of us had to store our bags and wait for the rooms to become available. After checking in, we all wandered off to see what we could see. I love this city. I’d love to spend more time here. It’s energetic, it’s always interesting, and has some of the most beautiful buildings, streets, artwork, and people I’ve seen. The only thing better than Montreal on a sunny day is Montreal at night.

The entire group had been invited to a club that night for cocktails, all arranged by "Mr. Punctual" Fred. The only problem was that this place had a dress code: No jeans, and no running shoes. That immediately negated me, and probably a dozen other people. We hadn’t really carried such clothes with us — we never saw the need for it, and utility was more of a concern than appearance. Although I suppose I should have planned for that to some degree, considering that we were going to Montreal, and at least one night was likely to be fancy over the course of the trip.

Ivan and I decided to wander a bit and see what we could find. The goal was to track down a deli. The delicatessens in Montreal, although legendary, are nowhere near where we went, I think. We walked down towards Notre Dame Cathedral, east to Jacques Cartier, and couldn’t find a single place that even remotely looked like a deli. Not being completely familiar with Montreal, I can only assume the delis are more towards the original Jewish quarter of the city. 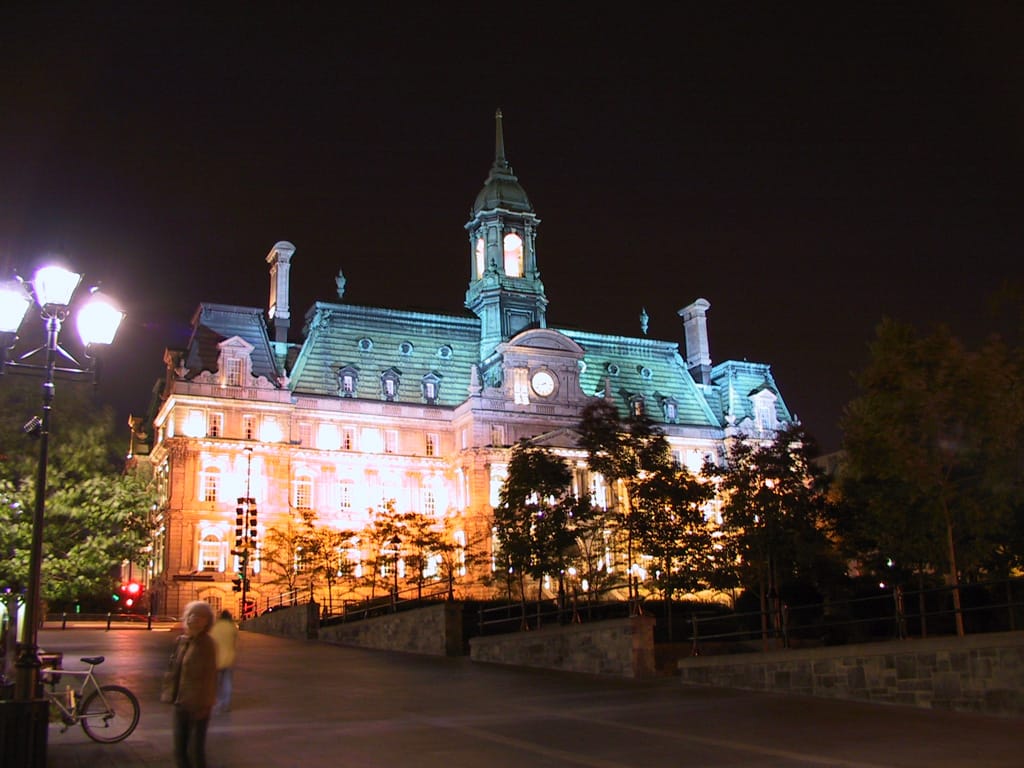 We ended up choosing a somewhat-touristy restaurant on the edge of the boulevard. Like most of the other restaurants we saw, they featured mussels and chips. (Apparently, it’s a common French dish. I’ve never seen it before.) Neither of our meals were extraordinary. When you’re hungry, you don’t really mind.

After dinner, we headed back to the hotel. Ivan was very patient with me — I was stopping every so often to take pictures of the city at night. When we arrived back at the hotel, Ivan headed upstairs — I went back out to take more pictures. I didn’t stay out too long, though. This stupid cold I’m harbouring is making me feel a tad icky. I turned in a little early (even when many others were heading out to some great club somewhere) to get this thing out of my system. 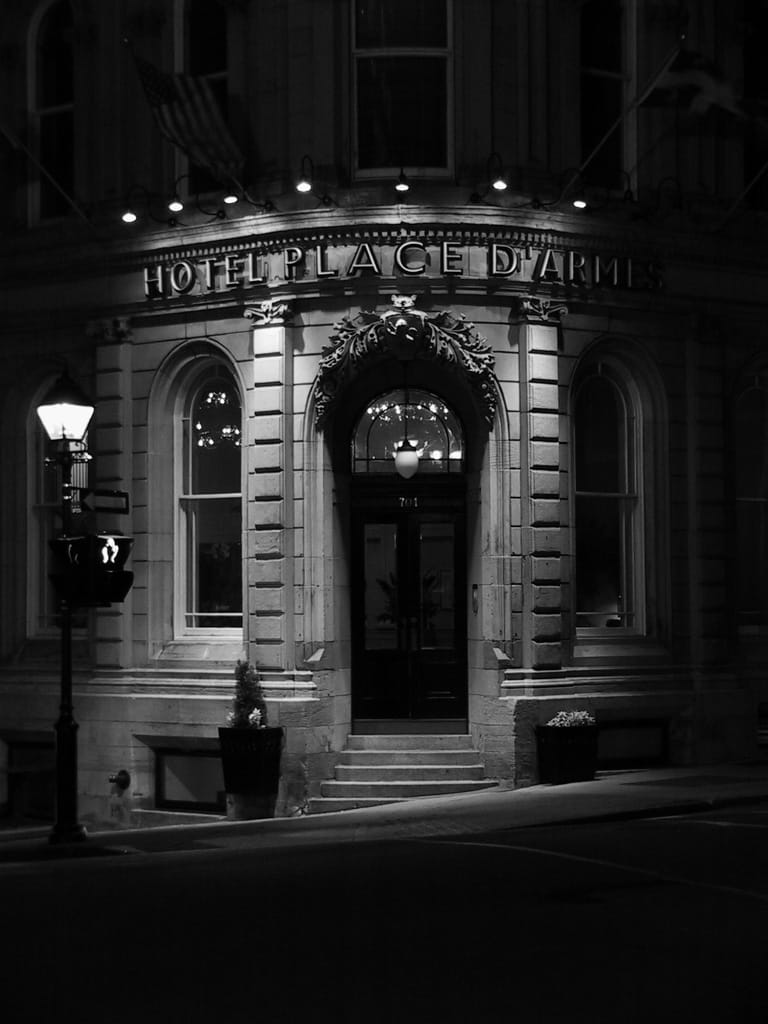 I ran into Stefani at the entrance of the hotel. She and Bill C. are running out to join the others at a club — a different one than everyone started off at. She was a little baffled at the picture I was taking of ... well, traffic. I was interested in lights. I love light. And moving light is a personal favourite. I had to show Stefani and Bill what I was trying to do. Both suggested that I put my camera away (I wonder if everyone thinks the same thing) and join them. The thought of going out is very tempting, but I can just see this cold turning into something worse.

There are times I hate being responsible.