Sunday, 22 September 2002
[This entry written by Geoff Sowrey, ©2002 Canadian Broadcasting Corporation (CBC). Text used with permission of CBC. The opinions expressed within do not necessarily reflect those of the CBC, employees, affiliates, or subsidiaries.]

Five of our team staying at the hotel met in the lobby at 7:15 to walk to Union Station. Only a couple of blocks away, it wasn’t a long walk. Carrying a full hiking backpack, camera bag, laptop, and duffle bag, I must have been quite the sight walking down Front Street.

Finding our train on Track 1, I dumped my bags in the Park car, and awaited instructions. We had to be ready for 11:00. And the train was pointing in the wrong direction. To solve this, we completely unloaded the baggage car into the Skywalk so the train could go out to turn around. We had one hour.

Packing and unpacking the train used to be stressful. It used to be difficult. Now it’s routine. The running joke was that we’d have it all worked out when we got to Halifax. Who knew it would be before Toronto?

We were setting up in two locations in and around Union Station. News, Children’s, and the Boutique took up home in the Skywalk. Sports and New Media were slated for outside, along Front Street. This wouldn’t have been quite so bad, except New Media’s home was behind the stage, downwind from the diesel generators. For the first time since this tour started, I was angry. 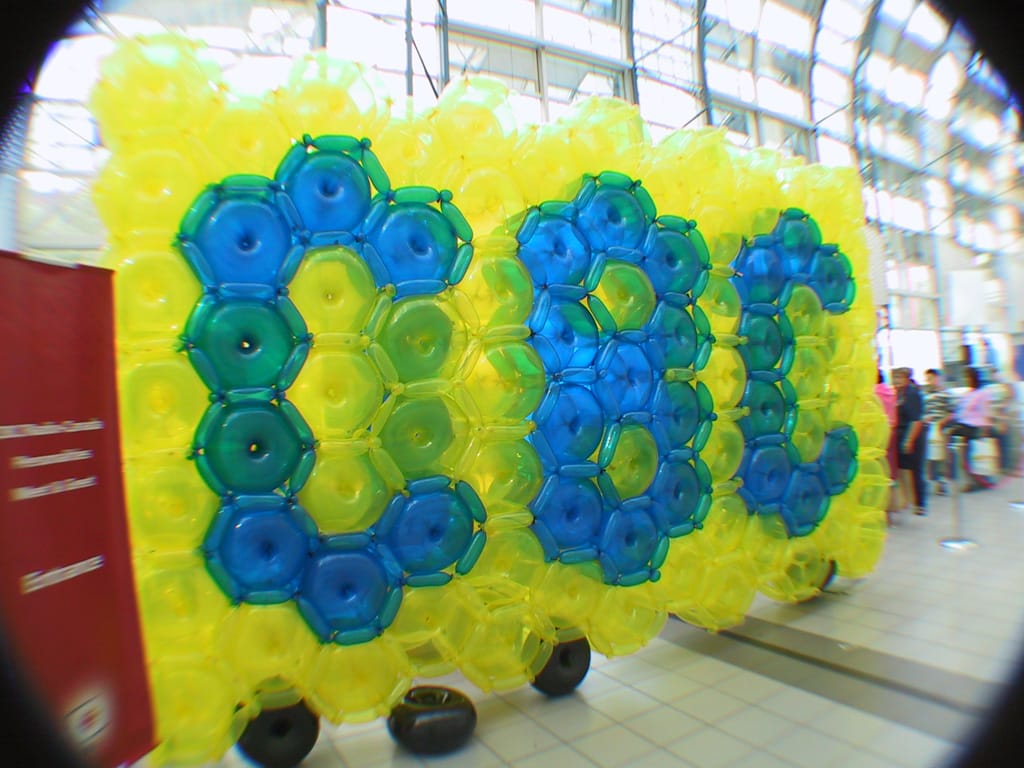 It seemed as if New Media had become an afterthought, wedged off in the corner because no-one else knew what to do with it. The fact that we were behind the stage was just insult upon injury.

I didn’t want to be outside, even with our lousy location. According to the weather forecast, it was supposed to rain. New Media has nine computers (with nine LCD monitors), and a plasma display. It’s possibly the most expensive display in our travelling open house. As far as I was concerned, it was either full set-up inside, or as we’d done in Windsor, a partial outside.

Debbie and I complained. I hate complaining, but we had little choice. Eventually, we won the opportunity to be inside. But all we did was go through the doors. We didn’t move any closer to the others. We were still isolated. No signage, no pointers, and now even the map was wrong. For the first hour, Debbie and I moped. We were not happy campers, but moving seemed out of the question.

For a while, the people passing New Media were interested only in VIA’s Renaissance train. This didn’t exactly make our mood soar. But then people started looking for us. Most of the others in the CBC team were amazed that we’d been dumped off in a corner, and I think a few people were directed to us. Although we never came close to the crowds we had in Edmonton, we were happy to have people come by, use our computers, and learn a little about the CBC.

Our volunteers were all from the CBC, and were extremely helpful. We all fielded questions, from the simple ("how do I see the train") to the difficult ("do you have archives of [insert show here]").

One such request came from a gentleman who had purchased the book "Looking Back", which covers the history of CBC Television. He had a list of nine classic CBC shows. He wanted to know what month and year the shows had switched from black and white to colour. The five of us, including Julie, just scratched our heads. He didn’t walk away empty-handed, however, as Julie and Debbie were able to direct him to Audience Relations. A researcher will hopefully soon solve the problem. 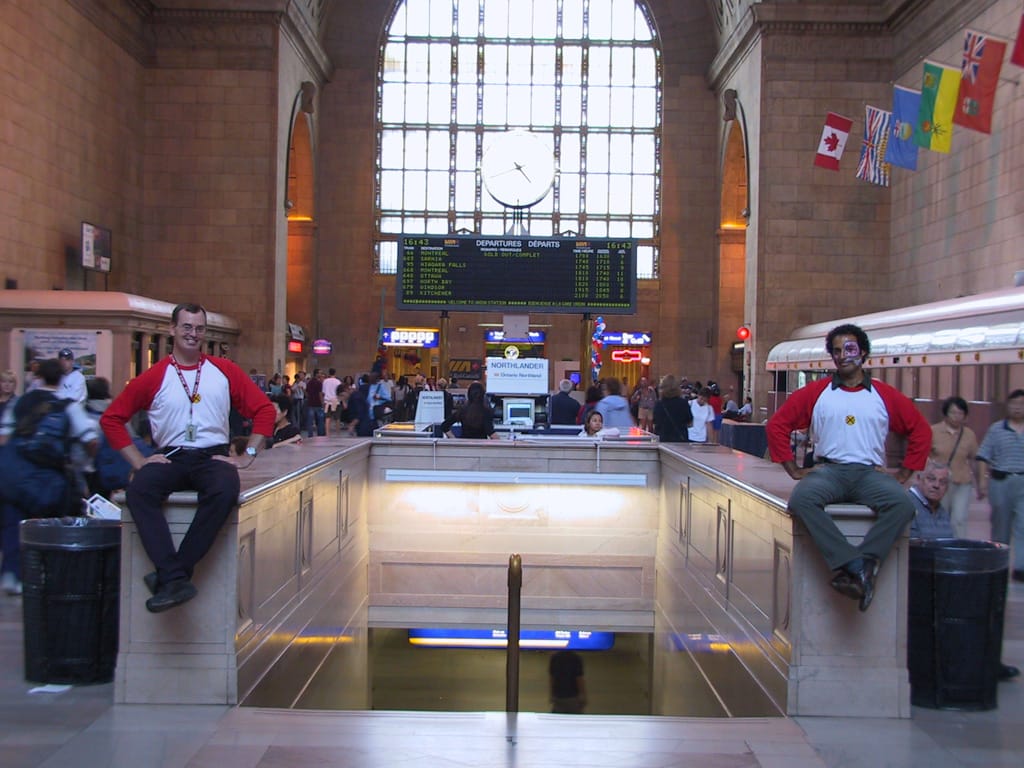 As I was finishing helping a woman cast her ShowVote for Beachcombers, I heard my name called out. I turned to see a face I hadn’t seen for over three years: my friends Jason and Stephanie (with their two children). They had driven over an hour to come down and see the show, and to see me. We talked for a while, before I suggested they get in line for the museum before the line got too long.

About an hour later, our walkie-talkie crackled with "Geoff Sowrey, what’s your 20?" (That’s radioese for "where are you"?) A few minutes later, my Aunt Ruth and cousin Lauren appeared. I was having a field day of visitors. We chatted for a brief time, and I told them what our journey was like, and how much fun (despite all the bruises and lack of sleep) we were having. Little did I know, though, that the call for my whereabouts hadn’t been from my family.

Debbie (Hynes, not Lindsey) approached, toting two people she had guided down from the Skywalk. Emily and Sydney were looking for me. Both are loyal fans of the CBC, particularly radio. Emily regularly reads the cbc.ca website. That’s how Emily found the journal entries I write. She’s been following our exploits since the beginning, and she wanted to meet the person who’s been writing about them.

Then I got the biggest compliment I’ve ever had. For years, I’ve had a few people tell me that my writing is a little wordy (if you’ve read the previous entries, you’ve probably figured this out by now). I’m a descriptive person. It seems, though, that I have the perfect audience: the visually impaired. Both Emily and Sydney are legally blind. They can read with the assistance of magnifying glasses, or leaning in close to monitors using large fonts. That also means that they cannot see what I’ve seen so far on this trip. My wordiness, however, does allow them to imagine the sights. 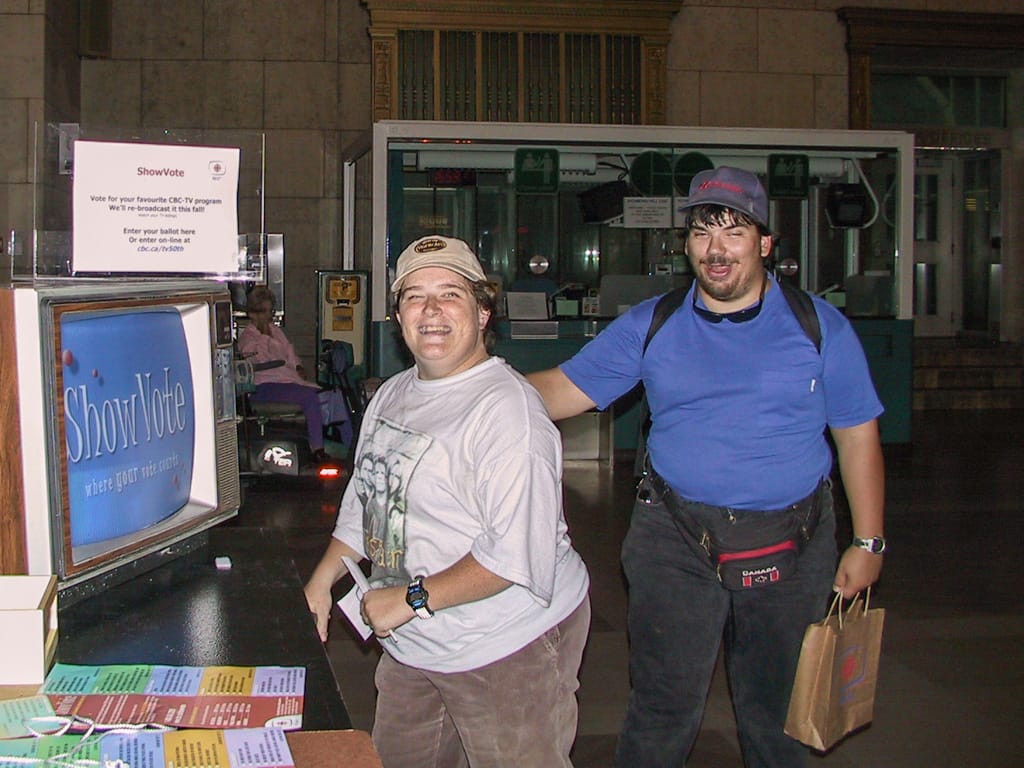 Flounders can’t get any more flattered than I was. I’ve never had a total stranger come up to me and compliment me on the work that I do. Now I know how famous people must feel like. It’s very humbling.

While I was revelling in the compliment, Emily proceeded to tell me how she and Sydney lived on a fixed income. And with $16 of their last $20 of the month, had travelled from Hamilton to Toronto, using whatever means possible. Just so they could meet me.

I almost cried. My aunt and cousin, who were sitting nearby, took pictures of us for posterity.

We talked probably for over an hour before Emily and Sydney carried on their tour of Toronto. My aunt and cousin left shortly after. Then I finally got to have lunch, with my friend Kim and her friend Rob.

The afternoon disappeared quickly, and soon it was time to start taking down our equipment. Striking the set was immeasurably easier than putting it together, partly because there was no question where we were going. Also because our volunteers needed no guidance for putting things back in boxes.

Without trying, we packed up in two hours. After a quick debriefing, we were off in different directions again. This time, however, I was off to Oakville to visit with family. Tomorrow, we have our second day off. It will be the first day we’ll all be away from each other. The feeling is a little strange.

Originally going to take the GO Train, my family insisted I take a taxi. They wanted me home for dinner, and the train would have taken too long. I rode to Oakville, all the while thinking about how, in some small way, I’d made a difference in someone’s life. Someone who had never met my family, my friends, or me, had known who I was and come looking. I might not have signed any autographs, but that didn’t make the experience any less important. This is truly a day to remember. I have experienced my true 15 minutes of fame.