Friday, 20 September 2002
[This entry written by Geoff Sowrey, ©2002 Canadian Broadcasting Corporation (CBC). Text used with permission of CBC. The opinions expressed within do not necessarily reflect those of the CBC, employees, affiliates, or subsidiaries.]

So much for good weather. When I checked the weather forecast this morning, it said rain. That meant a slight different configuration in our New Media tent arrangement, and fewer people out to visit us.

For the tent, two tables instead of four, six computers instead of nine, and no centre triangle. This would allow us room to let people into the tent to view the content if we had to roll the walls out when it rained.

It’s a good thing we did, because it rained. A lot. Not all day, thankfully, but enough to make us a little damp. It also damped the spirits of our potential visitors. We ended up with fewer people out to see us. This was a blessing in two ways: less chance of long line-ups, and easier for us to interact with others. 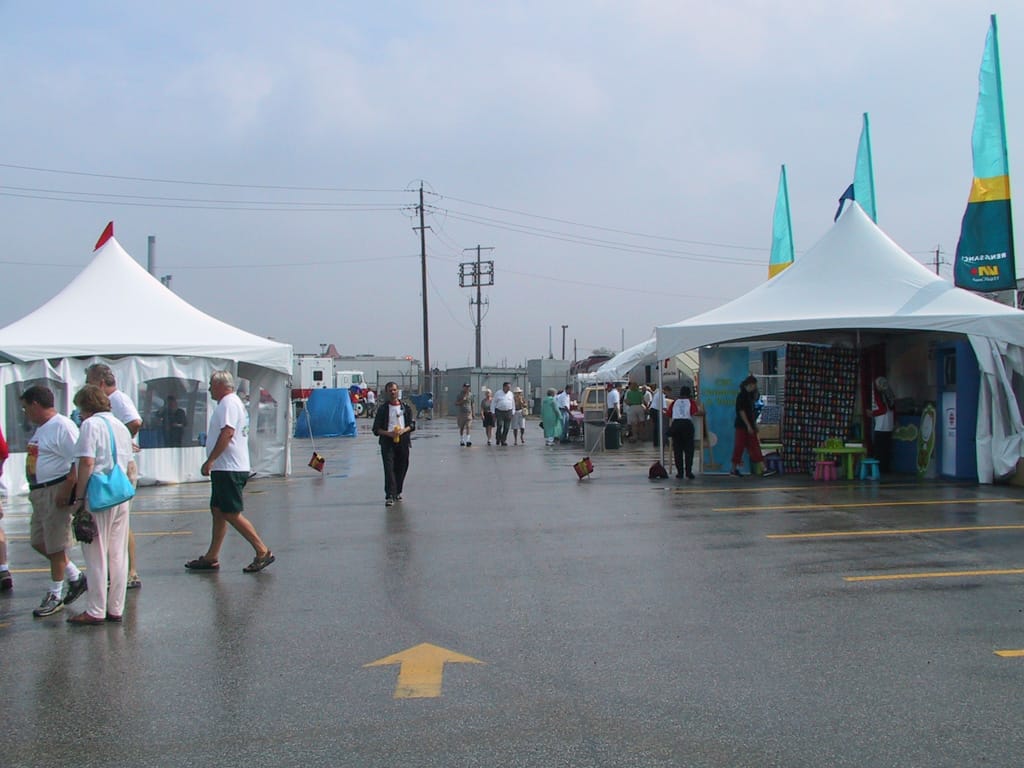 Most of the people I spoke to didn’t mind the rain — they liked it because it would keep the crowds away. They were ecstatic to see the museum (I have yet to meet anyone who didn’t like it), and were surprised to see all the other material we’d brought along with us. It makes me wish we could put out our full event at every stop.

One other thing that helped a lot were our volunteers. We had a lot of them. They were all go-getters, willing to go that extra mile. One of the volunteers at the New Media tent, Mark, was also a local historian. While at lunch, Debbie strongly recommended that I talk with him. (I should mention that I love Debbie — she’s been watching out for me like a mom.) 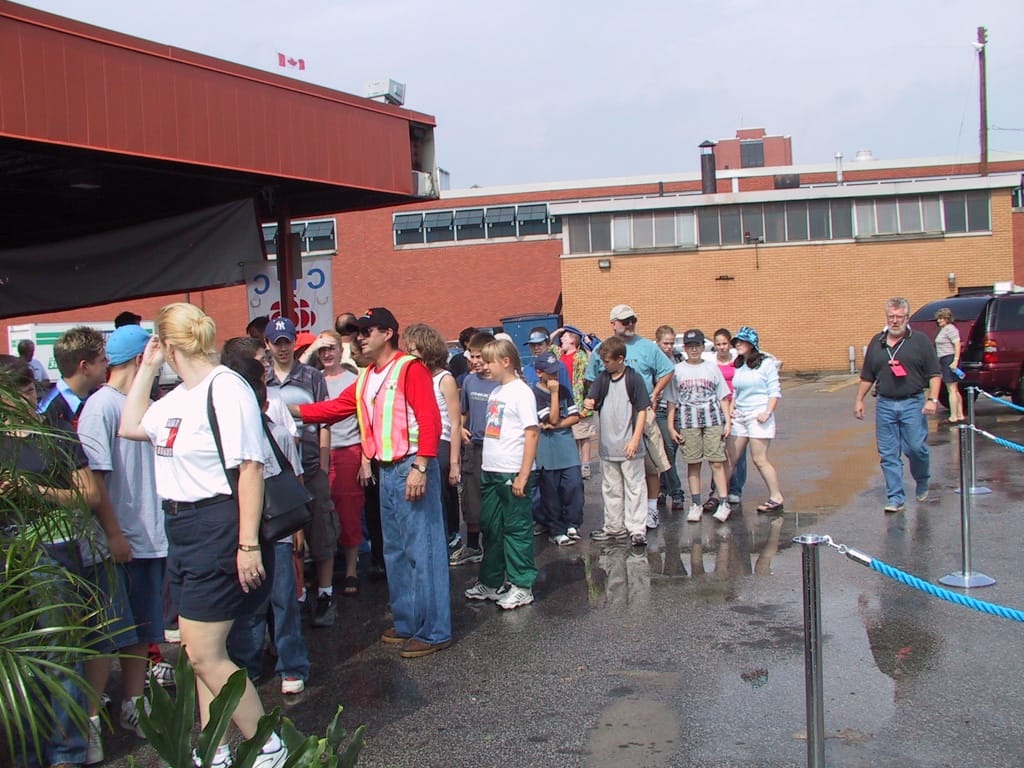 The VIA Rail station is not downtown Windsor — it’s in an area called Walkerville. Walkerville, in 1858, was the home of the Hiram Walker and Sons Distillery. It was a company town, with appointed mayors and officials. The town serviced the needs of its sole employer, the distillery. The company built row housing for employees, and mansions for its management. At the centre, against the banks of the St. Clair River, is the distillery.

The neighbourhood still exists today, though it is decidedly more upscale than in its past. The row houses are well-kept, and probably well sought after. The larger houses are still here, too, including the large mansion built by Hiram’s sons. (Hiram himself lived in Detroit.)

Shortly before our dinner break, my partner Debbie (like I said, she’s my Guardian Angel) got me the opportunity to get a behind-the-scenes tour of the new VIA Renaissance equipment. Analisa tagged along when she heard that we’d be climbing into the locomotives. This was courtesy of John, our new train rider. (John took over for Peter when we got to Mimico.) Like Peter, John’s a train fanatic, which is why he still loves his job.

John took Analisa and I first into #6403, the CBC F40PH-2. This was the same locomotive Peter had guided me through in Melville. After a brief stop, we climbed into the new P42. It’s like climbing into the bridge of the Starship Enterprise. I’m used to the valves, knobs, and gauges of steam locomotives. The computerized console of a P42 is something almost foreign to me. And I’m a member of the digerati! 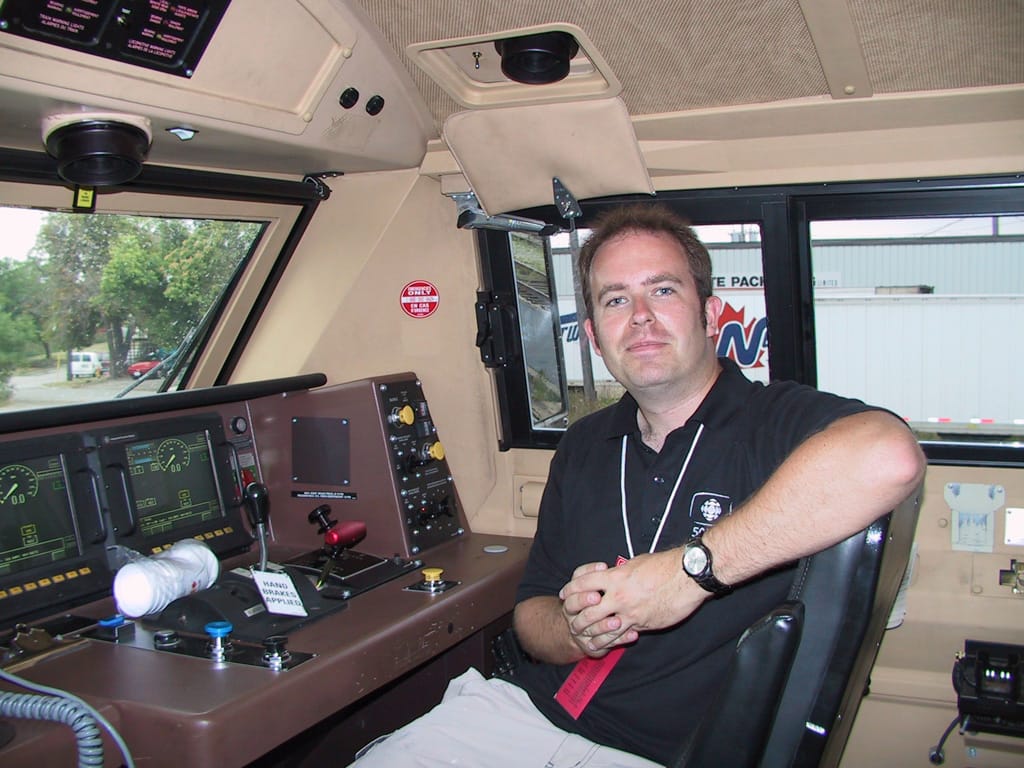 A standard VIA P42 diesel electric locomotive (which are almost the same as Amtrak P42s) has five computers to keep the unit running. If these crash, the locomotive doesn’t work. But you can control virtually any aspect of the locomotive, and record every last shred of information about the locomotive’s operation. I still prefer a firebox to a diesel engine.

Then John took us through the Renaissance cars. These were originally European passenger cars built in England. When the order fell through, the cars remained undelivered. Transportation company GEC Alstom stepped in, bought the entire load, and then resold them to VIA. After some modifications to bring them to North American standards, VIA will put them into use in the Windsor-Montreal corridor, and on the Ocean train.

The coach could be right out of a slightly more futuristic airplane. The seating, the layout — all you needed was a pair of wings out the windows, and you couldn’t really tell. The sleeper cars were significantly different, though. Many of the rooms (the deluxe rooms in particular) have showers, toilets, and sinks. It’s quite impressive. The space is small though, and I think they lack the charm and personality of the stainless steel Budd equipment that we’re using on our trip.

Rain hit us hard a couple of times during the day, but rarely for more than 10 minutes. For most of the afternoon, it was relatively nice. Right up until we started to strike the sets, barely a minute after the computers had been loaded onto the train. I don’t think Noah had to content with that heavy a downpour.

All of us got wet. Actually, "wet" isn’t quite right. "Thoroughly soaked to the bone" is a little more accurate. And "all" isn’t entirely correct, either. Some of us took shelter under partially collapsed tents. Some of us, including myself, didn’t care. We just plugged away at our job, just wishing that we had a bar of soap so we could make full use of the shower. The rain wasn’t too cold, so we didn’t freeze.

Despite the weather, we managed to pack up in less than two hours. In fact, it took us less time to pack than it did for VIA to remarshall the train and depart. This should have driven us crazy, but merely annoyed us. The biggest problem was that the internal power had to be shut off while we waited. We watched the full length of "Shrek" in the Bullet Lounge of the Banff Park before power came back on (oh, the joys of battery-powered laptops).