Monday, 16 September 2002
[This entry written by Geoff Sowrey, ©2002 Canadian Broadcasting Corporation (CBC). Text used with permission of CBC. The opinions expressed within do not necessarily reflect those of the CBC, employees, affiliates, or subsidiaries.]

It’s hard to say much about today that’s positive.

We could analyze the events of the day to try and determine what went wrong. The exercise would be fruitless and pointless, except to determine what not to do next time. Not enough space, too many people, combined with poor local organization and a train location that proved to be nothing short of a nightmare led to a disasterous show. We had a lot of happy people, but far too many unhappy ones — and they were usually us.

We love running this show across Canada. Sure, we’ve had rough times and stops that we didn’t think were great. But never before as this team been so entirely upset about trying their best and being told it isn’t enough. It was disheartening to be berated by patrons and even volunteers who don’t know how much sweat and tears that has been spilled since the start. It was enough for us to want to close down early and run screaming.

It all began just after noon, when the schools started arriving. From 12:00 to 15:00, we would run group tours (in other words, schools) through the museum. This also meant, of course, all our other exhibits.

The Boutique and New Media were in the rotunda of Union Station, along with Radio-Canada and a production set for a live broadcast starting around 16:00. It was cramped, but bearable. Throw in a few hundred children, and cramped becomes contemptible. 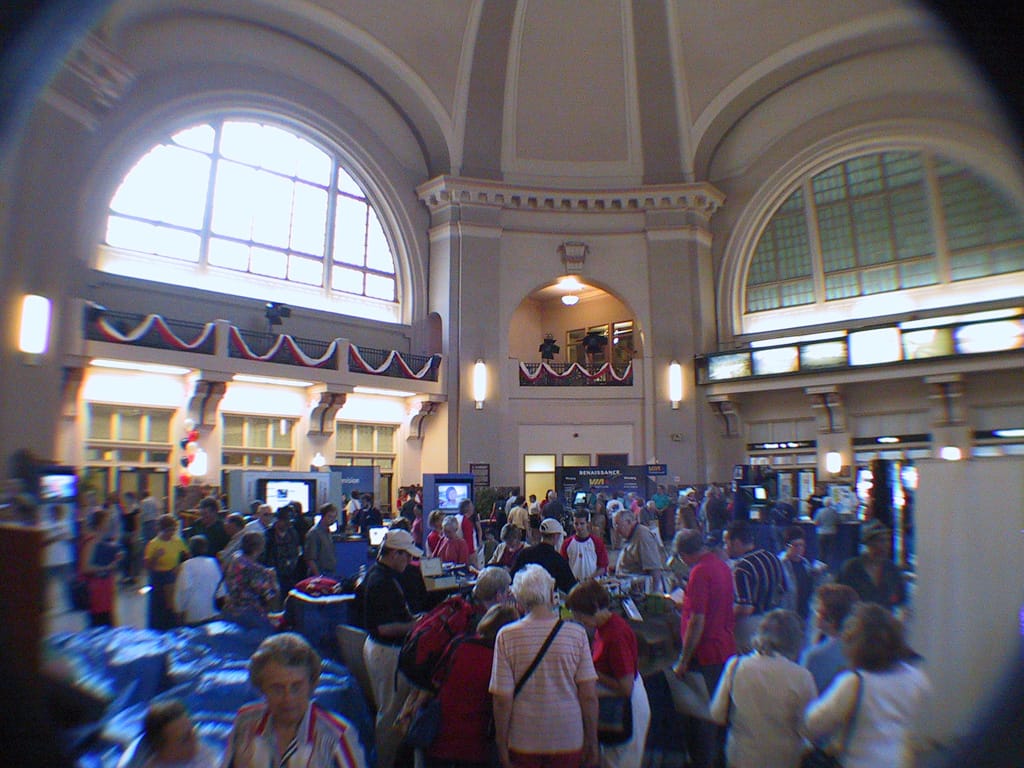 I remember being a student. I remember field trips. We were bloody murder on teachers. But I also remember having some serious strict discipline if we ever got out too far out of line. Most of the CBC crew remember that. Either we were being too critical, or a large number of the children who came were complete terrors. To the point where hidden keyboards were pulled out, computers almost hacked (we had to keep a very close eye), and children who almost ruined the Friendly Giant’s costume in the museum.

The chaos in the rotunda came nowhere near the level of mayhem in the back parking lot. Sports, News, and Children’s tents were under siege from a thousand hands, all wanting something. Few thank-yous were heard, almost no eye contact, and virtually no interaction. At times, it was like watching piranhas strip a body to its skeleton. None of the tents had volunteers. We were on our own. 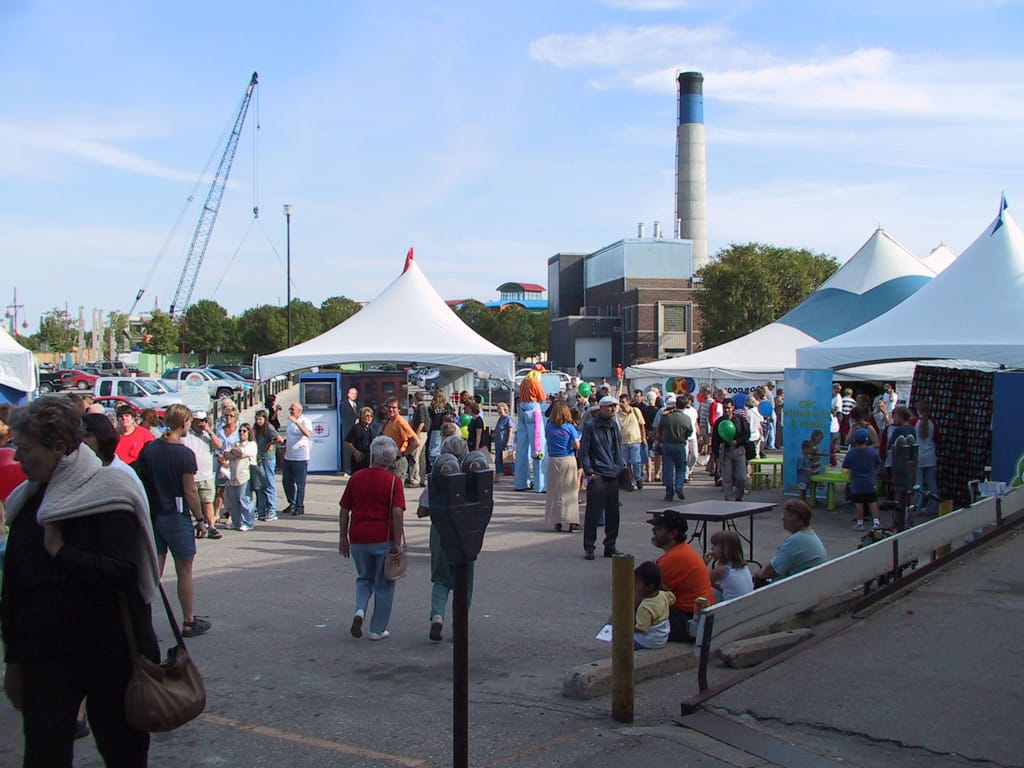 Things went from worse to terrible. Apparently, one of the schools had disadvantaged children. On such child had anger issues. He hit Franklin, hard enough to crack the helmet inside the head. Luckily, the volunteer wasn’t injured, but the damage was done. Emma was beside herself — how on earth could a child like that be allowed to attend something like this? How Emma made it through the day without screaming (or a few stiff shots of scotch) is amazing.

By 15:00, we were all ready to pack up and leave. But people had already started arriving for the public event. We still had five hours to endure. We held hope that it was just the children, and that the public would be more understanding. To a degree, they were. But the temperamental individuals more than made up for the nice people. 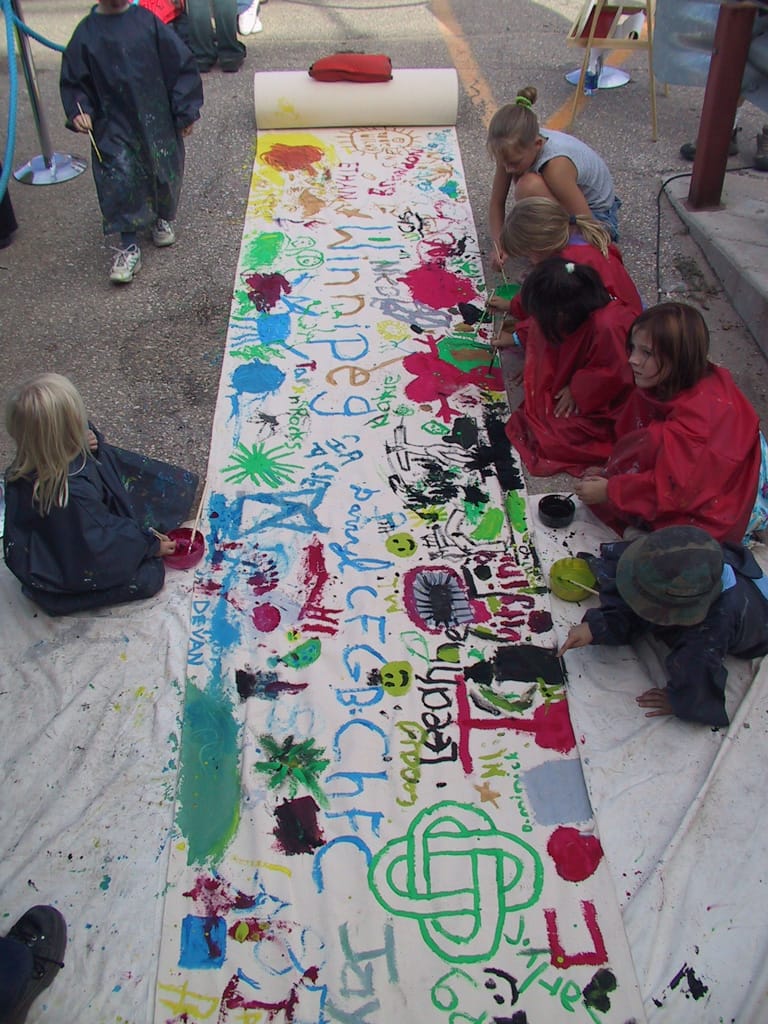 Barely an hour into the show, one of the volunteers in the rotunda — an elderly man — came up to me and asked who ran the show. A bit of a vague question, I asked for clarity. He then asked who ran the museum. The answer was Ivan. The man offered a suggestion on how to improve things. My "Danger Will Robinson, Danger!" alarm went off immediately. I took a chance and asked what his idea was.

The man had a valid point. The train was parked in a very awkward location, making it difficult for people to get to it. But that was the best we could do — we didn’t have a lot of options to play with. Such was the nature of the site. I tried my best to defuse the man’s insistence, offering the thought that this situation had been addressed a lot in the last few weeks, and this was the best we could do. My suggestion fell on deaf ears, and the man pronounced that he was going to do something about it.

"I need you in the rotunda, ASAP."

I never knew humans could turn such an interesting shade of red. Had Julie been a more predatory animal, say a lion, I’m sure she would have taken the man’s head off. He was encouraged to leave immediately. He lingered a while longer, complaining and pointing at me ... but soon he was gone and it was one less problem to deal with. But when you’re having a day full of problems, one less problem doesn’t really do much.

Neil, Julie, and Debbie were the breakwaters against the hurricane of trouble. How they got through the day without either breaking down or blowing up I cannot fathom. I watched as one person decided to cut deeply into Neil, claiming false advertising when the tickets to the museum all sold out before she arrived. I felt for him. I can’t imagine how much that must have hurt.

In our larger venues, we give out tickets to the museum. This is to control the flow of visitors. We’ve had a few complaints about it — why don’t we just let people fend for themselves? The answer is easy: fewer people will get through the museum, and we’ll have more angry people who didn’t make it in. At least this way, we can manage the crowd, and let people know that they won’t get in.

Probably the single biggest issue was the local organizer, Raydene (or maybe Raylene ... like it matters, we know it’s just a pseudonym for "Satan"). This woman was supposed to have organized everything in the area, so we could concentrate on what was going on. But she didn’t organize anything, it seemed. Volunteers disappeared regularly, didn’t show up when we thought they were supposed to, she didn’t allow for feeding the volunteers or provide water, and we heard things like this all day over the walkie-talkies, never hearding the expected responses:

"Julie to Raydene..." [said while spitting fire through gritted teeth]

As the day progressed, we started making plans for packing up. This was going to be a stash-n-dash. This was our shortest pack time, and has been worrying us since Vancouver. We had a short period of time to strike our sets and pack everything up. This concerned me a lot, because the New Media kiosks take a while to pack up. But our Fearless Leaders had a plan.

Sports, News, and Children’s tents would come down at 19:00, an hour early. At 20:00, New Media and Boutique would strike. The theory was that by 20:00, the other three tents would be packed, and everyone would help strike the remaining two. (It was also loosely necessary because of the live broadcast that went on right next to our two displays — we had to wait to do our packing job.) It gave me a bit of pause, but I put faith in the plan. At that point, faith was about all I had left.

The last two hours in the rotunda were the worst. All day, bright spotlights had made the temperature soar. Starting around 17:30, hundreds started to filter into the rotunda to watch the live broadcast. It started to get warmer. The small space caused further problems — everyone had to pack in tight. This rendered both Boutique and New Media almost inaccessible. This was both a blessing (fewer things to watch for) and a curse (couldn’t keep an eye on what was happening). 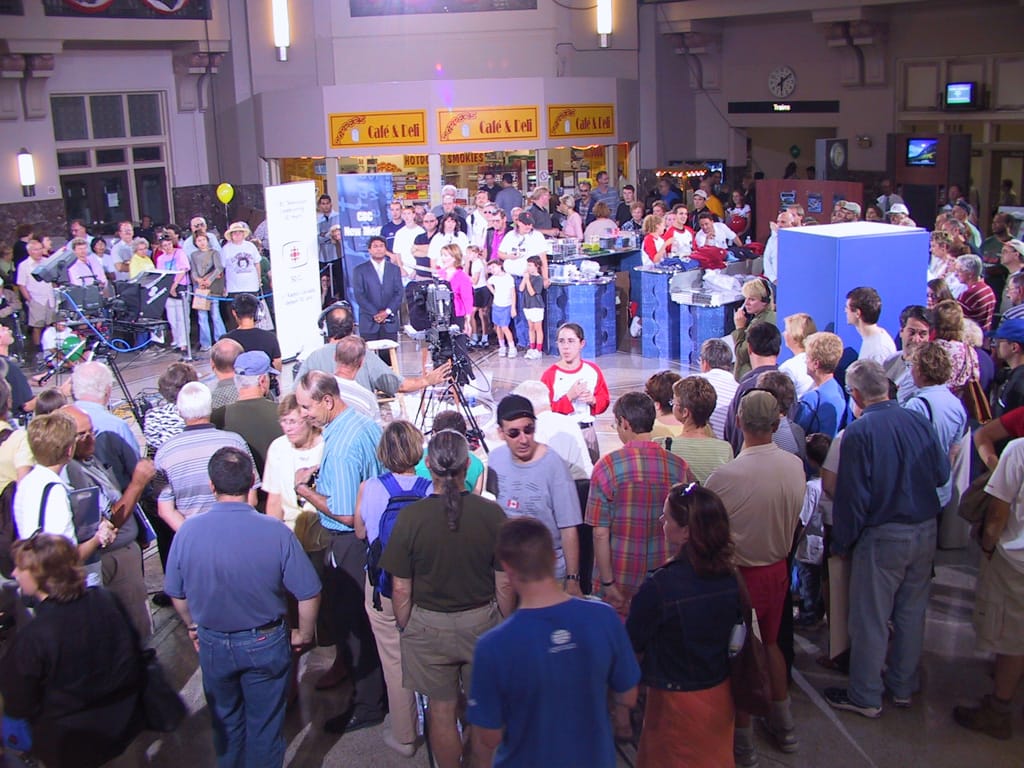 Just before 19:00, the radio chatter started. The tents outside were coming down, and instructions aplenty bantered back and forth. The mood over the radio had changed. Earlier in the day, it had been tired, distraught, even tense. Now it was driven, determined, and focused. The end was in sight, and everyone wanted out.

At 19:30, Debbie and I started to close down New Media. It was time to close out another ShowVote category. By 19:50, the six computers featuring ShowVote were off. We were disconnecting cords, wrapping up cables, and preparing for the imminent rush.

It was now really tight. The broadcast (now featuring Fred Penner) had shifted to the celebration, including the largest birthday cake I’ve ever seen. It was wheeled in right between New Media and the Boutique, cramming people against both booths. Although the broadcast finished just after 20:00, we had a serious people problem — people were leaving too slowly.

The rest of the team arrived, armed and ready to help. Tabletops were removed, computers packed, tables flattened. The screwgun arrived and the centre triangle came down. The monitor boxes contained within the triangle were rapidly filled with monitors, and the plasma screen packed away. Over at the Boutique, unsold merchandise returned to their respective boxes, taped up, and loaded on a VIA luggage cart. Within 30 minutes, we had taken down both booths.

Luckily, the crowd had filtered out when we started to haul things upstairs. When we’d set up on Sunday, the freight elevators were trouble. We were a little worried that they would slow us down, or worse, malfunction. Instead, they probably saved us a great deal of time. The process worked so well, we finished by 21:20, a full 40 minutes ahead of our departure time.

Neil, Emma, and Rose were on their way back to Toronto. None of them were leaving us permanently. Rose has a lot of business to handle, and will rejoin us in Windsor. Neil and Emma need to see their families, and tackle pressing issues. Both will return when we do our Toronto show on the 22nd.

I ate a dinner I originally didn’t want. I was far to stressed and tired to be hungry, but Debbie convinced me to eat. I took a table right next to CBC celebrities Ian Hanomansing, Diane Swain, Peter Jordon, and another woman who was a radio personality (unfortunately, I’m not well up on my CBC radio names). I was so tired I didn’t even notice they were there. It wasn’t until I heard Ian’s voice that I realized who was behind me. 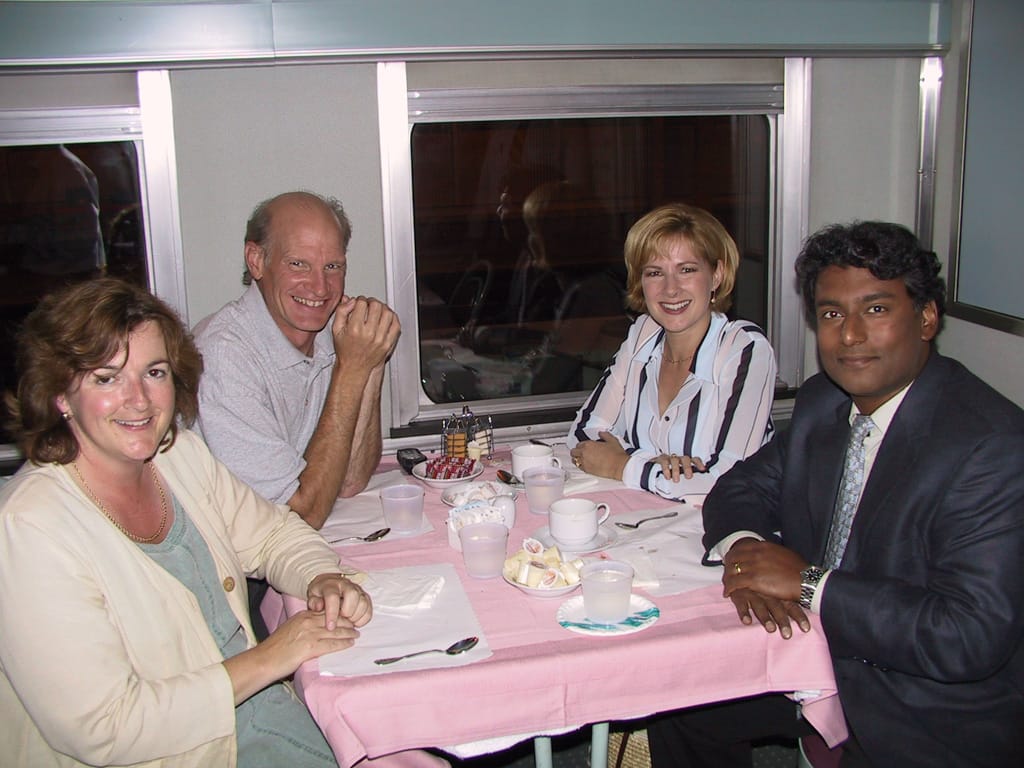 We were exhausted, mentally, physically, and emotionally. We all needed showers and about two days’ sleep. We wanted to leave. We had to wait. We needed a new locomotive.

Our train has two diesel electric locomotives: #6403, which is our CBC-decaled lead locomotive, and #6412, a second VIA locomotive that’s mostly backup. We lost #6412 outside of Biggar when the crankcase exploded. (That’s why you have a backup.) We had to pick up another locomotive before tackling northern Ontario. It’s a long ride, and you don’t want to cross it solo.

Taking #6412’s place was #6449. It had come in on the #2 train the day before (eastbound Canadian), pulled off due to mechanical failure. Repaired, it was turned over to us. Once the both engines were fuelled, they were reattached and air brakes tested.

I was in the Skyline’s dome when the train started forward. There was a sudden overwhelming rush of relief as we pulled out of the station. While I had been excited to come to Winnipeg, like everyone else I was ecstatic to depart.

Almost instantly, people began to slowly unwind. Some went directly to bed. Others sat and watched the dark scenery pass. The train was quiet, save for the blats of #6403’s horn, and the clanking of the train as we rolled along.