Sunday, 15 September 2002
[This entry written by Geoff Sowrey, ©2002 Canadian Broadcasting Corporation (CBC). Text used with permission of CBC. The opinions expressed within do not necessarily reflect those of the CBC, employees, affiliates, or subsidiaries.]

We arrived in Winnipeg somewhere around 05:00. I use the vagueness because I’m not entirely sure. I was quite tired, and still don’t know what possessed me to open the window and look. When I saw us arriving at Union Station, I returned to my slumber.

The sounds of activity eventually pulled me from bed, and into action. Though that was mostly due to my bladder. Unfortunately, Winnipeg was our first stop without honeypots (the large barrels that collected human waste from the toilets). We had to hike into the station and track down the bathrooms in there. Fortunately, Winnipeg’s Union Station isn’t like Toronto’s — no steady stream of passengers to see us so dishevelled first thing in the morning.

Breakfast soon woke me up, just in time to meet our new crew member. Today, CJ finished her time with us. We gain Debbie in her place. I am sorry to see CJ leave. Although we started off on the wrong foot, we ended good partners. I look forward to seeing her in Toronto. We’ve also gained a replacement for Enza’s position: Ingrid. In a way, I kind of feel bad for her — I hear a lot of "I miss Enza". It’s not directed at Ingrid, but she does have a legacy to live up to.

CJ wasn’t the only person leaving. This morning’s breakfast would be the last for our entire initial crew (not counting Enza’s departure five days ago). Today is the first rotation of personnel. Most of the VIA crew rotates out here, with only Peter and Jeanine carrying through to Toronto. Perhaps the most depressing part for many people is that the band is also leaving. Due to prior engagements, Frank has to leave us here. Frank, David, Paul, and Richard all want to stay on board, and at one point tried to rearrange their schedules to see where they could come back. We will see them again, but probably not on the train.

In commemoration of the crew change, we took a full cast photo in the rotunda, including the VIA staff. It was a sad affair, as we said goodbye to new friends and comrades. It’s been a great week — I can’t wait to see what the next weeks bring us.

Following breakfast, I took a wander around the station. Everyone I know from the Winnipeg area has been telling me for a while that I needed to see Union Station. They were right — it’s quite beautiful. Originally opened in 1911 by the Grand Trunk Pacific and Canadian Northern railroads, Winnipeg’s Union Station is a shining example of Beaux Arts architectural style. (And if you’re wondering, I got that snippet from a plaque hung on the wall.)

Of particular note is the rotunda. This large room has welcomed countless waves of immigrants and visitors to Winnipeg, it’s cavernous ceiling alluding to the wonders that await beyond the doors. Aside from cracks in the rotunda floor, the building has survived the years well. The cracks stem from the platoons of soldiers who marched through this station in the 1940s. Their combined weight and rhythmic step caused the floor to flex and break.

Also of note is the railway museum on Track 1. When railway traffic declined in Canada, Winnipeg was left with a mostly-empty station. (Toronto’s Union Station became a commuter rail hub.) The unused space was rented to Winnipeg Railway Museum. They brought in their vintage equipment including the Countess of Dufferin, the first locomotive in northwestern Canada. I know this because one of the VIA staff had a key to the door and let me in. I just had to be quiet and quick, so the museum staff wouldn’t catch me in there. 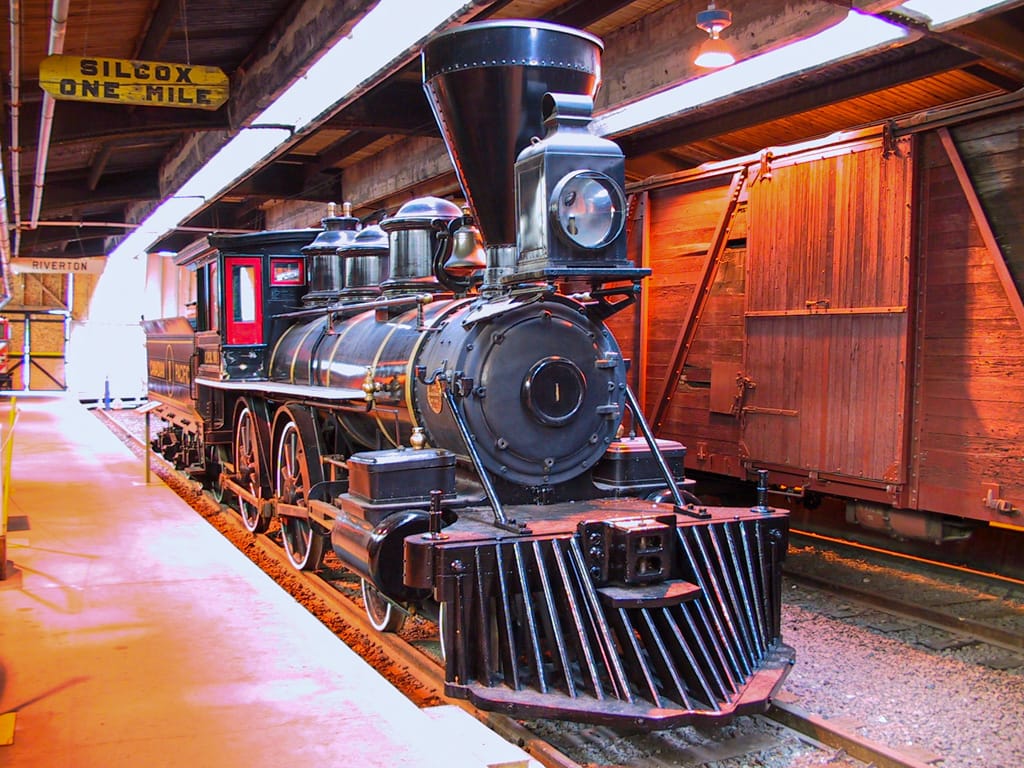 Today’s event was for Winnipeg CBC employees. A lighter load for some of us, it still required a full setup. This was the hard part. It was our first multi-level setup — the train is on the second floor of the station. Our equipment went either to the rear parking lot or to the rotunda, both underneath. It took nearly twice as long to set up as usual. I tried to show Debbie what CJ and I have figured out over the last week, so she’ll have fewer bruises. But with the nature of our layouts, things always happen.

The setup was far from perfect. It took a long time to get equipment downstairs, mostly due to a sudden breakdown of the freight elevator. This stranded Neil and Cliff for the better part of an hour, along with a cart full of equipment destined for the rotunda. 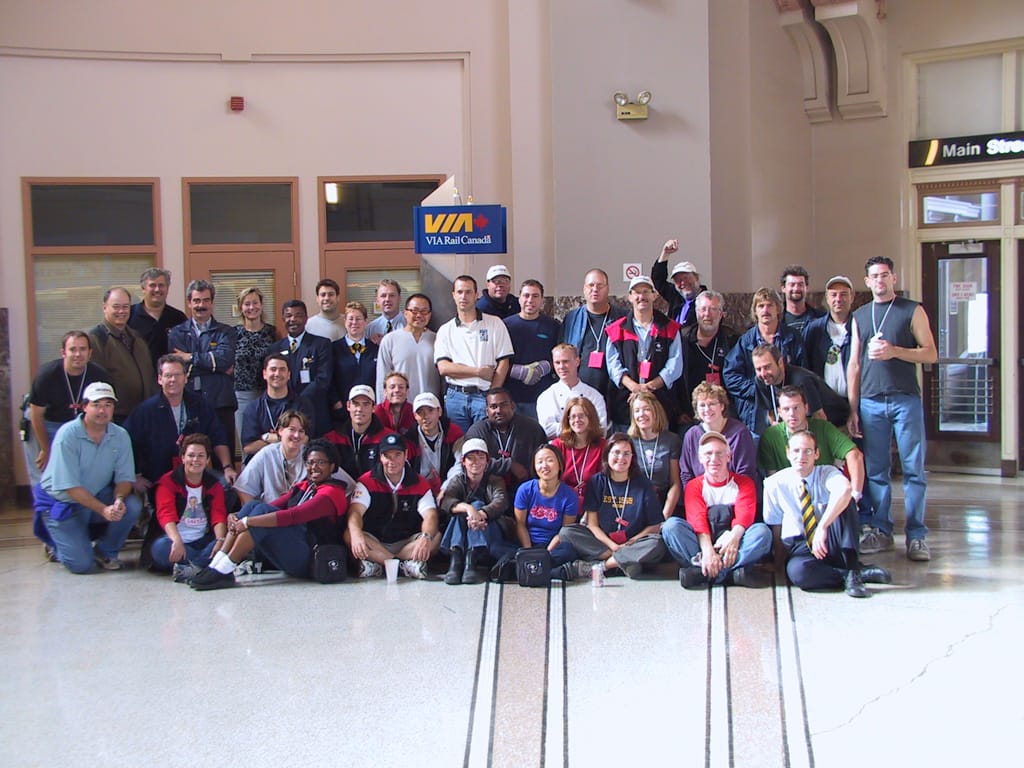 By roughly 14:00, the New Media area was complete, and it was time to break for the hotel. I desperately needed a shower. With the on-train services suspended in the station, and several hours of labour, I felt a little more dirty than I cared to admit.

Before we left, a small group of us took lunch at a hamburger stand across the road. Angela had sworn these were the best hamburgers to be had. They were tasty, indeed, and most importantly filled the hole that had since formed in my belly.

Again, our hotel was way out in the middle of nowhere. This isn’t CBC’s fault — I can only assume it’s Holiday Inn (when you get free rooms, you get what you’re given). We’ve had one hotel downtown: Vancouver. The others have been substantial drives from the train and from downtown. (Although in Saskatoon, we were reasonably close to good restaurants and nightclubs.)

Clean again, I returned to the station to explore a bit. I caught a cab with Daryl — he went for lunch, and I went down to The Forks. The Forks is old railways land just to the east of Union Station. Back in the Golden Age of railroads, this was CN’s yard in the downtown. Roundhouse, ice house, car shop — it was all here. (It’s now in the Transcona Yard to the east of the city.) The Forks is now trendy area of downtown with parkland, restaurants, and shops. 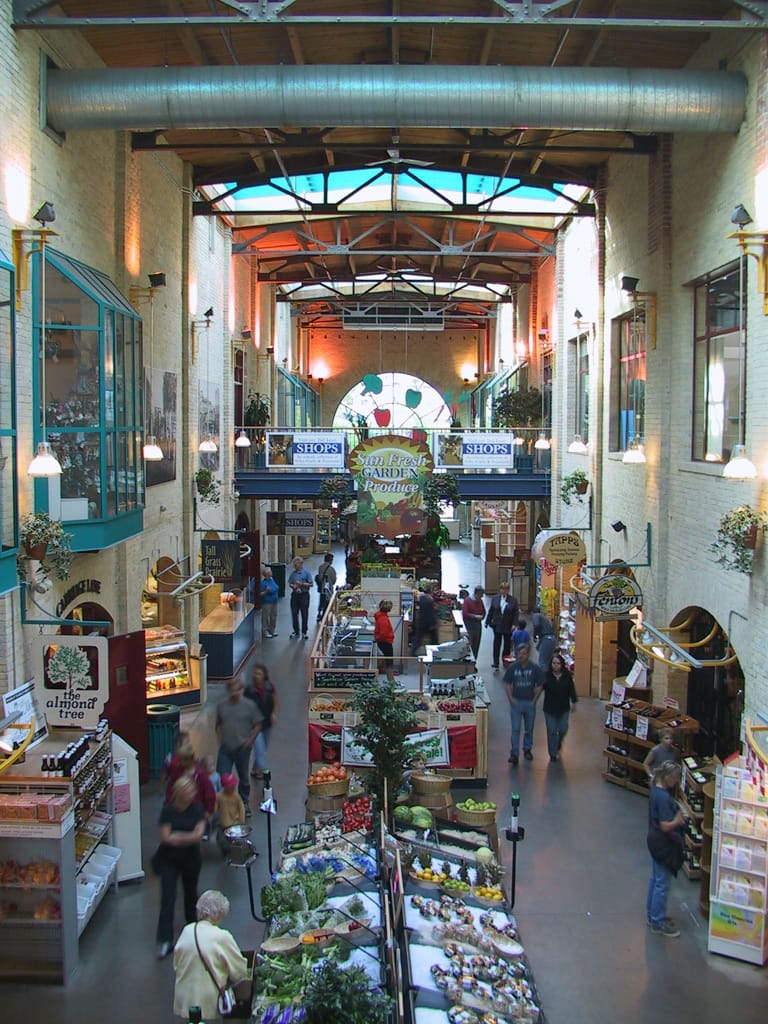 CN and CP had a great ability to always choose the best land in town. In many other cities, the abandoned land eventually came very expensive condos, golf courses, or sports stadiums. Winnipeg had enough sense to make it into parkland and public places. They even kept the old railway lift bridge — it’s now a stationary pedestrian bridge.

The event was dead. Cemeteries see more life than the New Media booth did. Sadly, the other booths outside and the museum were hammered with visitors. We assumed it was because the free food was out there. We noticed one thing that did worry us — the people seemed a bit testy. Western Canadians are general an agreeable folk, who are generally easy-going. These people seemed itching to take someone’s head off. We shall see tomorrow if that continues.

When closing time arrived, we didn’t pack up. Because we’re setting up in the same location tomorrow, all we had to do was turn everything off. The tents outside brought the expensive items indoors, and walled off the booths. Back to the hotel, a brief beverage in the lounge, and we were off to bed. We need all the sleep we can get. Based on how today went, tomorrow will be a long day.