Saturday, 14 September 2002
[This entry written by Geoff Sowrey, ©2002 Canadian Broadcasting Corporation (CBC). Text used with permission of CBC. The opinions expressed within do not necessarily reflect those of the CBC, employees, affiliates, or subsidiaries.]

We’ve been on the road now for a week. It feels like a month. We started working together as a group 10 days ago in Vancouver. Then, we were a collection of small teams and individuals linked by a common project. In the last week and a half, we’ve grown into almost a small family. Our team is strong, almost to the point of being able to read each other’s thoughts. It’s caused a little trouble every now and then, but on a whole we’re quite close knit.

We’ve come to see the train as home — many people have welcomed their tiny berths after spending a night in some cavernous hotel room. The train is large enough for us to spread out and find a quiet corner. Likewise, we can also group together into a room and have fun as a group. It’s our home, it’s our office, it’s our museum and storage locker, and it’s our safety blanket.

After spending the night off the train, we were excited to get back to our home away from home. Too many nights away from the bed you know and love can be troublesome. With the schedules we’ve been keeping, stability is necessary. And with little time for relaxation off-train, we sometimes overcompensate.

That’s what happened to us this morning. The previous night had been a long one, and some of us were a little late to start the day. I awoke when my biological panic alarm told me I was going to miss the train. I leapt from bed at 07:34, did a rudimentary clean, and quickly changed. I was out the door by 07:45. I made it with time to spare, and took the shuttle bus with the rest of the group.

Others were not so lucky. Fred, our VIA representative, was actually late arriving at the train. Yes, this was the same guy who had reinforced the necessity to be punctual, on almost a daily basis. Unfortunately for Fred, this means an endless string of punctuality jokes for the remainder of his stay onboard.

We headed across the prairies to Melville, a four-hour trip. Originally, Daryl and I were to fly in a helicopter, so Daryl could shoot video of the train, and I could take pictures. (The big need was for video. I would have been a fortunate side-effect.) For some strange reason, all the helicopters are based in Melville. The cost to fly them from Melville, pick us up and take us back was just too prohibitive. It’s the second time I’ve almost had the chance to chase a train from a helicopter, but missed out for some reason beyond my control. 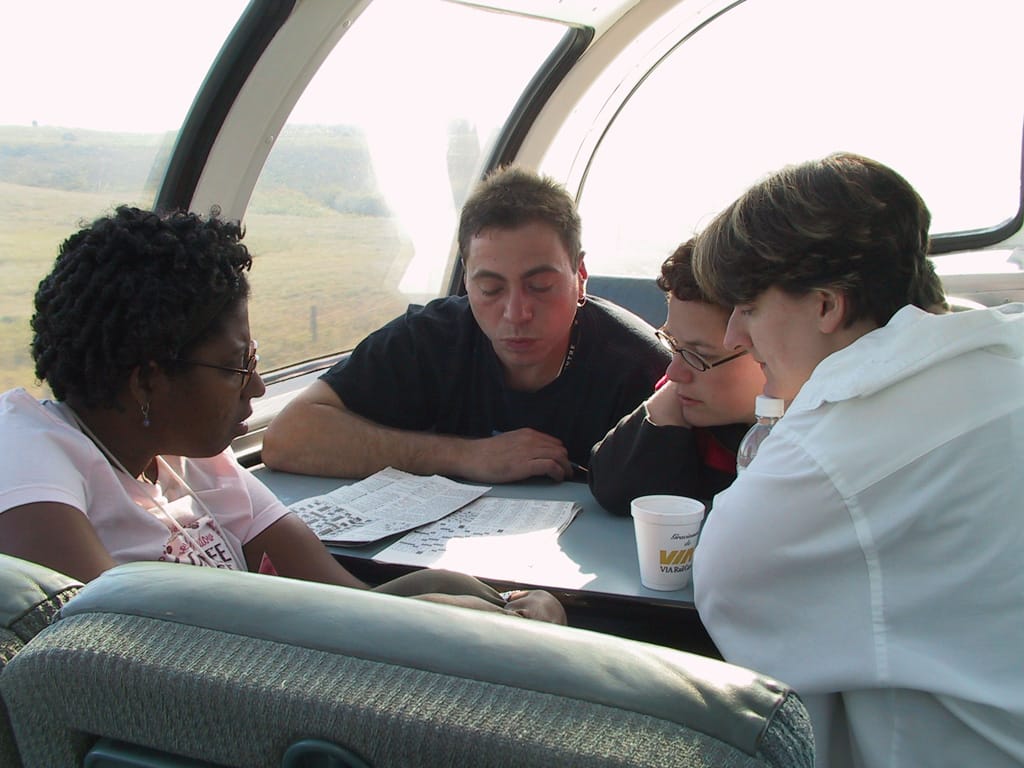 The trip to Melville clinched the desire to travel only by rail. I own a car, but use it only when I have to. I fly, because my family lives in Ontario and it’s too far for me to drive. I would take the train, but passenger rail service no longer goes to my home of Calgary (though many of the VIA staff assured me it will return next summer). But as I sat in my seat in the dome of our Skyline car, I started wishing and hoping for VIA’s return to the southern Prairies. 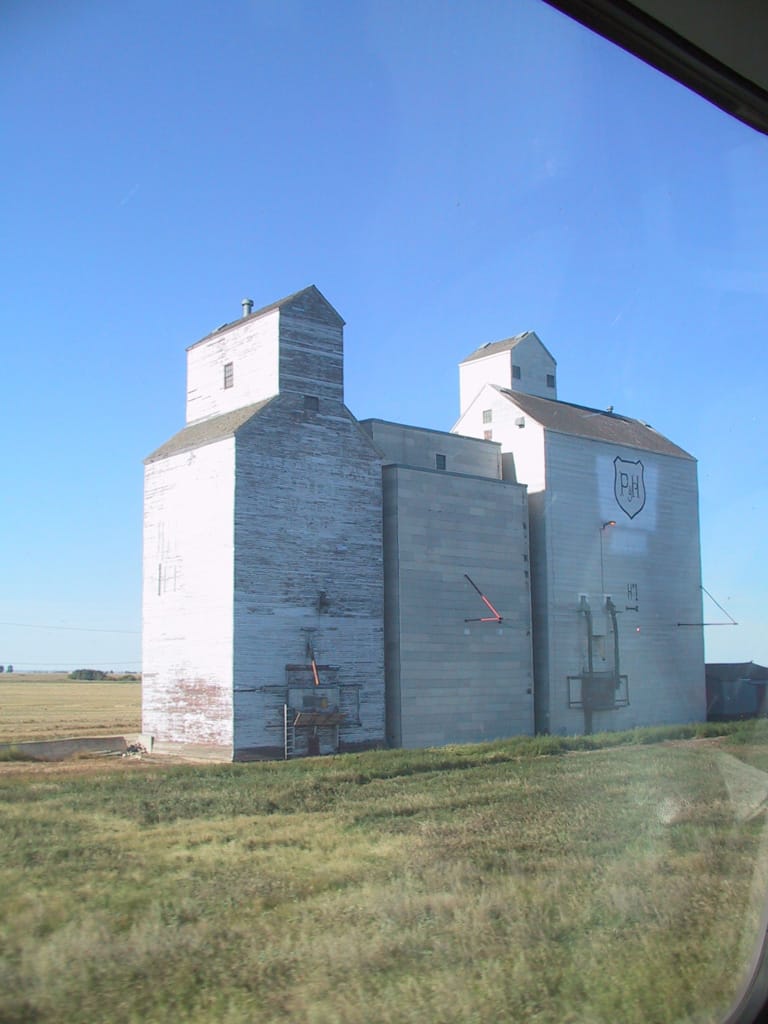 Melville is named for Charles Melville Hayes, president of the Grand Trunk Pacific railway in the early 1900s, which chose the site of Melville as a divisional point on its line. Hayes was one of the fateful passengers of the Titanic years later.

Today, Melville is still a divisional point on a railway, only now it’s the Canadian National. It’s roundhouse and support facilities are all gone, washed away with progress. However, the yard is still large, and locomotive crews change in and out at Melville. Tourism, however, isn’t quite as large a draw. (The CN station is closed, save for CN Operations, but the VIA station is still open.)

Parking on a siding next to the platform track, we proceeded to unload our equipment for a partial event. This was a challenge enough, though — the track sat high, and there was a significant slop away from the track ballast. It would take nearly every apple box (a small wooden box used for many purposes, including steps and supports) to keep things level.

At every stop we do, the technical crew has to assemble the stairs. This is how people get in and out of the museum cars. Normally, it’s not too big a deal. A little shimming here and there, and the stairs magically line up. But normally, we have flat surfaces. Even in Biggar, the ground was fairly flat. This required a lot of planning to even get the stairs erected, let alone stable. But the end result, as always, was a perfectly level set of stairs.

As with Biggar, people started arriving almost as soon as the train pulled in. We were officially open between 16:00 and 20:00. Melvillians seemed unable to wait. By 15:30, we were open for business in our front tent, and the museum lineup started to form.

The other line that formed was for bug spray. The field we were setting up on was home to a mosquito population equal to Toronto, and at least one grasshopper for each person in Melville. While the grasshoppers were enough to make a few people queasy, the mosquitoes would prove a far larger problem. 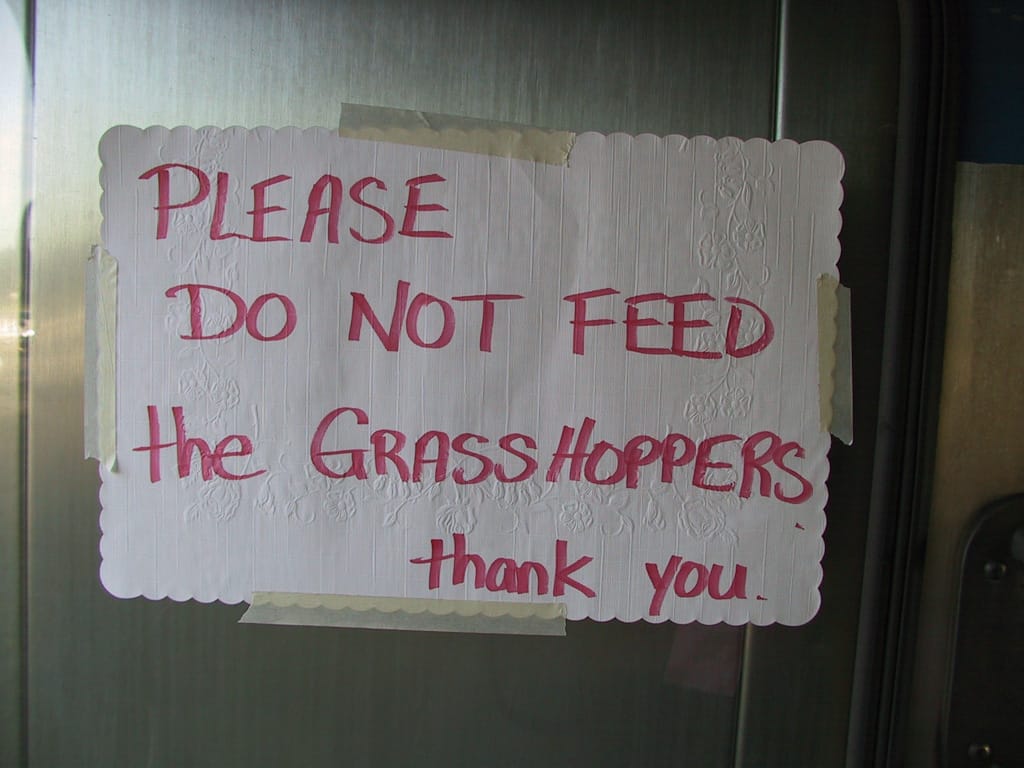 While the sun was out in full force, we had little to worry about. People kept arriving, checking out our front desks, listening to Frank Leahy and Friends, and visiting the museum. As dinner time rolled around, however, fewer people came out. At first, we thought it was just for dinner. But it wasn’t human dinner at issue ... it was humans for dinner.

In the span of about a half hour, the mosquito swarm quadrupled. They hadn’t paid me a second glance for most of the day. Now it seemed they were thinking: "Hey, we haven’t eaten him yet!" Before long, those of us outside were in long pants, and arm-length fleeces with collars. It wasn’t helping much.

The bugs were so bad we closed early. Our official strike time was 20:00. Everything, including a complex stair configuration, was loaded by 20:20. Our departure time was 23:30 (our first window in the train schedules). It was enough time for some of the crew to find the local watering hole. I regretfully stayed behind to catch up on work.

I’ve decided that we’re doing much more than just the celebration of CBC’s 50th anniversary. That’s our official job. Unofficially, and more personally for the crew, we seem to be conducting our own little tour: the Trans-Canada Pub Crawl. Ever since Emma tried to find that bar in Kamloops, there’s been an overwhelming desire to hit bars and pubs in every town we arrive in.

They should do a beer commercial about us.

While waiting for our comrades to return, VIA’s on-board mechanic, Peter, offered me a chance to climb into the cab of our lead locomotive. The work would wait. Peter, like myself, is a railfan. The main difference between him and I is that he turned his hobby into a full-time job. It gets him close to the things he loves, and gets him in the doors of other similar interests.

VIA #6403 is our lead locomotive, and is the one that we decaled for the trip. It’s followed by #6412, painted in regular VIA livery. VIA will swap out #6412 in Winnipeg before we go across Ontario. It blew out a crankcase somewhere around Biggar, and has been useless for two days. That’s assuming the eastbound Canadian doesn’t get our replacement first — #6443 on that train caught fire around Edson, and has been removed.

Modern diesel cabs are quite simple. Aside from the obvious training needed to operate on a modern Class 1 railroad such as Canadian National, a child could use the controls. That’s assuming, of course, that they don’t play around with the electrical system. That’s a little more complicated. And very, very dangerous.

While Peter explained the operation of the locomotive (it didn’t take too long), the engineers arrived for the next leg of the trip. They didn’t seem to mind at all that I was in there. I took a snapshot of the cab, and then Peter took me through the engine room.

There four basic parts to a modern diesel electric engine: the wheels (with the electric motors), the cab, the alternator (which produces electricity), and the engine. I’d never been in an engine room for a diesel electric locomotive. I knew the engines were big. I just had no idea how big.

The floor of the engine room is lower than the cab. The engine is sunk in the floor. Yet the engine still towered above me. And it was noisy. The Who don’t have concerts that loud. And it wasn’t under load — going in there while underway without ear protection is a really bad idea. Leaving Peter to his job, I returned to the coach car to try and finish typing out profiles.

At around 22:30, Darryl set up his Mini-DV player to show a montage of scenes he’s been filming since we started this madcap adventure. The show has been just Daryl. He shoots the film, edits the film, and edits the sound. Originally, I was the one fingered to do the job. In hindsight, the decision to bring on Daryl was certainly the right one. I couldn’t imagine doing all that I am, doing all the Daryl does, and producing anything remotely as good as what he has.

When the movie preview finished, there was a quick presentation to Julie, Neil, Analisa, and Debbie. The four of them have been keeping this project moving smoothly, and they’ve all lost sleep as a result.

With that, we all retired. It would to be a long day in Winnipeg.