Friday, 13 September 2002
[This entry written by Geoff Sowrey, ©2002 Canadian Broadcasting Corporation (CBC). Text used with permission of CBC. The opinions expressed within do not necessarily reflect those of the CBC, employees, affiliates, or subsidiaries.]

Friday the 13th has never been good for me. Some say it’s just superstition. Experience tells me otherwise.

Today started at 03:00. For most cities, it’s an unruly hour. For Saskatoon, it’s downright ungodly. Nothing happens in Saskatoon at three in the morning. Except, of course, us preparing for an eastern broadcast. Julie and I whisked our way down to the VIA Rail station for a live broadcast with Colleen Jones. Luckily, we sort of knew where we were going. Aside from almost missing the turn off for the main road south, the rest was easy to find, even in the dark. (You can’t miss the grain elevator down there.)

While I would love to say that I got to be on TV with Colleen, that’s not the truth. Colleen is a one-woman show, and is perfectly suited for the job. You want impressive? Try reading off the weather forecast for the entire country while having it read to you through an earpiece and make it sound natural. I have a hard enough time relaying messages over the phone to people who don’t care what it sounds like. 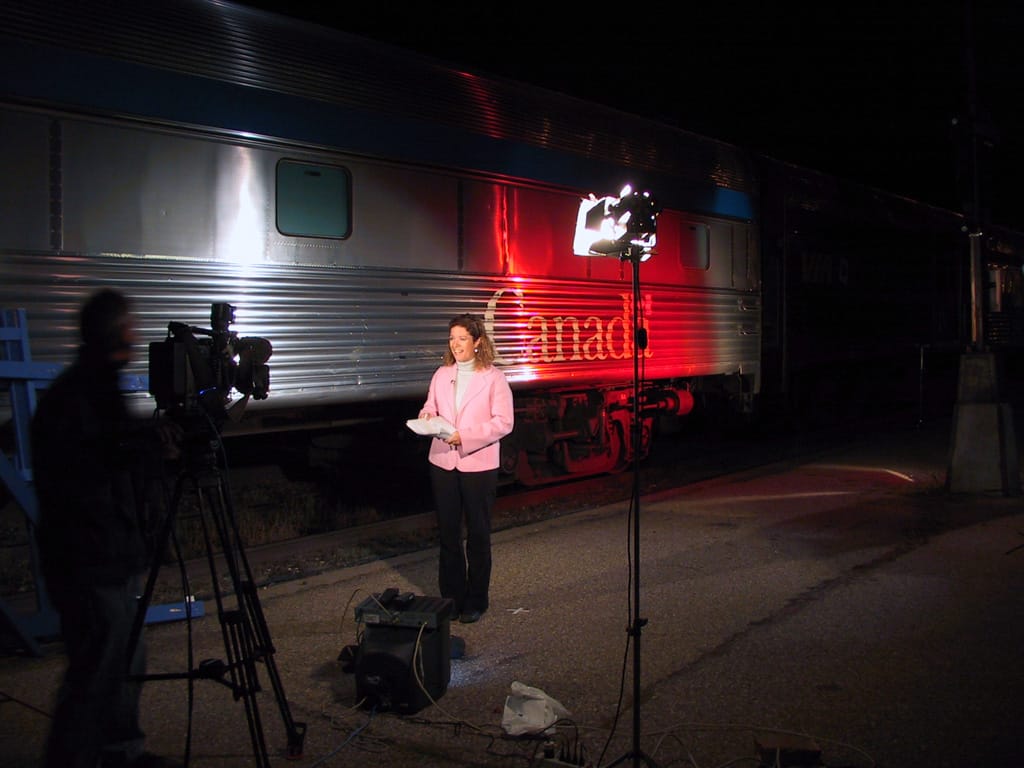 So why was I there? Colleen wanted to review the New Media kiosks. This is my little jurisdiction. Paranoia, and a far-too-good in-depth knowledge of how computers behave told me that I needed to be there. Originally, I offered my services. Then I insisted that I be there. I’d rather lose a couple hours of sleep for sanity of mind.

I’ve never seen a television broadcast before, certainly not a live broadcast. It’s quite an experience to see how this is all handled with a camera operator, another person whose role I never really figured out, and Colleen. Julie and I were there for answering questions (off-camera, when Colleen wasn’t live on the air) and covering the technical issues. (During a couple of breaks, I whipped in for a few pointers.)

By 05:30, the show was done and we were on our way back to the hotel. My intention was to sleep a little while, do some work, and then prepare for our event. Instead, I rolled around for an hour, and ended up groggy for the whole day. In addition to that, I lost my cellular phone, my gloves, forgot to tell Stefani when our shuttle was leaving, and probably said a few things I didn’t mean to say because I was too tired to think straight.

In short, Friday the 13th was continuing its historical trend.

About the only thing that’s gone right so far is the journals. After wrestling a position on the hotel’s "office" computer (we’re without wireless access again), I managed to email my files to Toronto for posting on the website. Brenda’s decided to streamline the process a wee bit. Due to connectivity problems, we simply can’t do the "every day" posting we’d wanted to do. So instead of me sending templates, I’ll just send text and pictures, and let Elizabeth and Terri sort out the details. And that’s just fine with me.

When we arrived at the VIA Rail station, my booth was most set up. All we needed to do was erect an extra table for the paper ShowVote ballots and prepare a few configurations on the computers. We had ample time, and didn’t rush our last part of the set up.

The wind outside was terrific. All the tents were staked down. Dust was constantly in the wind (Bill S. wrote in his journal: "‘Saskatoon’ is Indian for ‘shit gets in your eye'".) Many of the stand-ups had to retreat to the baggage car, or at least be tied to the tent poles so they wouldn’t blow away.

As usual, people were arriving long before we were done. This seemed to be a trend I doubt we’ll ever get away from. But it didn’t matter to those who came early. They seemed quite happy to wait for things to start happening. I love the patience of the prairies.

Our previous events had primarily been our show, with the odd bit of content thrown in by the regional organizers. In Saskatoon, we were now dealing with Radio-Canada (the French version of CBC), who not only occupied a significant amount of space, but also ran much of the live radio broadcasting. We seemed to have our first true CBC celebration — not just the train.

Guests arrived in a fairly regular flow. We weren’t hit with the surges we’ve received in previous stops. Our regional organizers were quite good in setting up other activities — like face-painting — that not only evened out the flow, but probably attracted people to stay in the station building, where the Boutique and New Media were located. 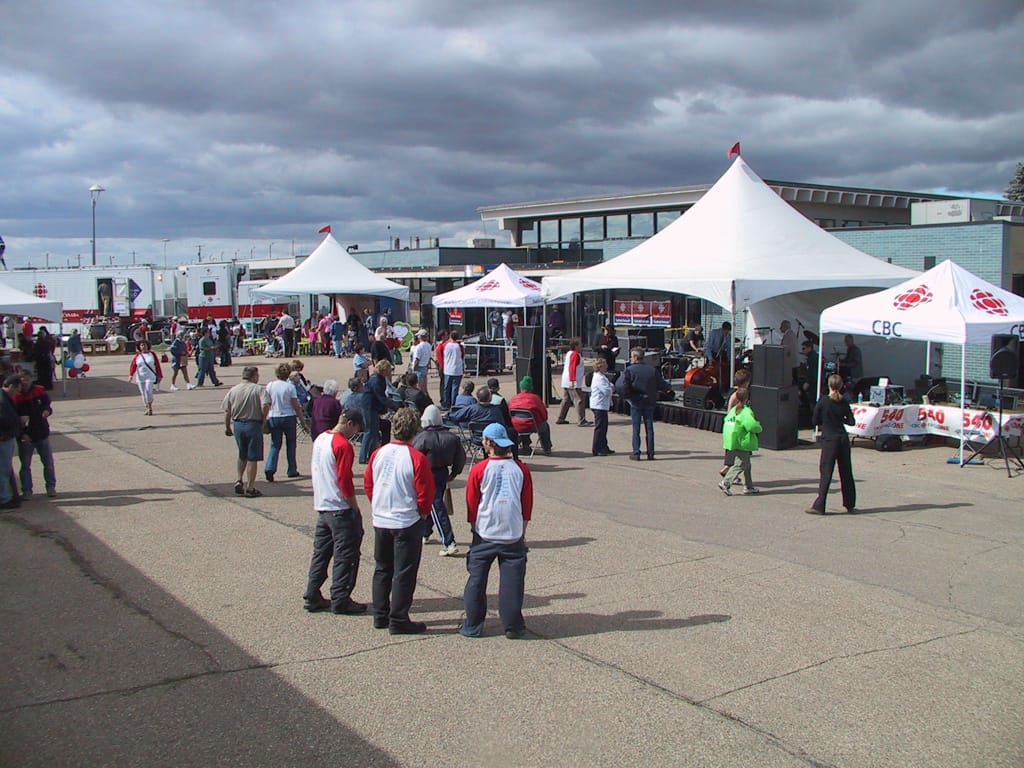 The face painters were amazing. I’ve never seen face painting like that outside of a couple Cirque du Soliel shows I’ve seen. It was an assembly line, where one person laid down the foundation, and another person marked the details. I think they had three lines going all at once. It got to the point where nearly everyone — including CJ and several of our volunteers — had painted faces. What really impressed me was finding out that they were all former street kids, who had been hired by the company, taught to do their trade, and are hugely successful. At one point, Julie even muttered something about wanting to have taken them on the entire trip, had she known about them. 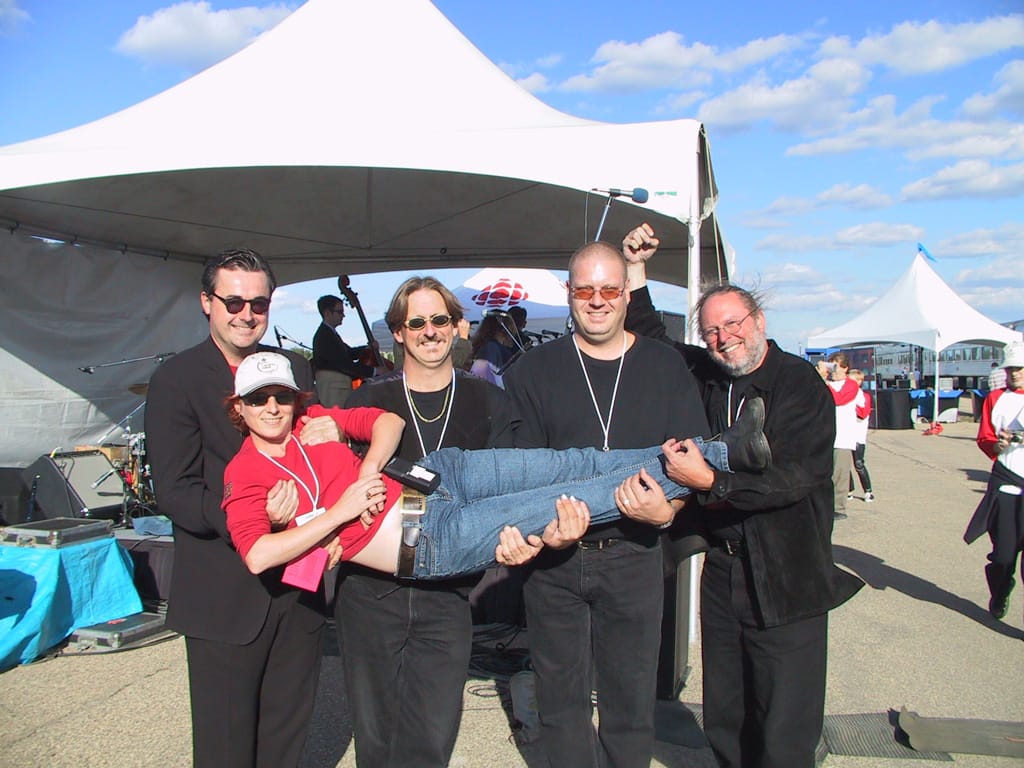 The day skipped by quite quickly. Well, for me, anyway. I crawled into my bunk on the train and snoozed for a couple of hours, lest I pass out at the kiosks. (Not that it really helped much.) Despite this being our longest event to date, we arrived at the hour of 19:00 far faster than I had thought.

In all our previous attempts at packing, our best time had been around three hours. This was not only unsuitable for some of our needs, it would mean missing one or more of our departure times. But for the fist time, our striking and packing of the baggage car took less than two hours. It was reason to celebrate.

Neil, Julie, Analisa, and I tried to celebrate (after returning to the hotel) by finding either the VIA crew, or the rest of our CBC crew. This brought us to Overdrive, a bar a few blocks north of our hotel. We arrived at the front door, all donning some sort of CBC outerwear. When they tried to ding us for a cover charge, Analisa went to work...

Analisa: We’re with the CBC. How about just letting us in?

Doorman: What’s the CBC? [Yes, he actually said that.]

Doorman: Oh, you guys do that? Okay, yeah, you can go in.

I think if you looked closely enough, you could have seen Analisa doing the Jedi mind trick.

Once we bypassed the cover charge, we came to realize that we were all too old. This took about 20 seconds. The music was earbleedingly loud (and nauseatingly bad), the oldest person looked about 10 years younger than me (and I’m the youngest of the four of us), and we couldn’t find a single VIA or CBC person there. We felt like narcs wandering around ... ‘course all the stares we were getting didn’t help much. We wisely abandoned the place and headed back towards the hotel. That’s when we found Fred, and we headed to our venue of the evening.

Jax used to be a warehouse. In the years since storage, it’s probably been many things. The second floor is now Jax, a rather strange little nightclub. Strange because it’s gaudy. I think that’s also it’s appeal — people go to Jax to avoid the brain-vibrating noise of other clubs. Most of the walls are painted in near-atrocious colours, purely for the fact that at about 23:00, the black lights come on, and everything lights up. There’s nothing like a neon nightclub to set things right.

By 01:00, everyone who had left the hotel (which was almost our entire crew, including VIA on-train staff) were at Jax. Most had taken to the dance floor for their song of choice. (Neil requested "Crazy Train" before hunting down the Technical Crew at another venue not far away.) To say the music mix was eclectic is to say Frank Zappa was a little off-kilter. Destiny Child’s "Bootylicious" followed by Ozzy Ozbourne’s "Crazy Train" only to be upstaged by Eminem’s "Without Me" certainly does make the mind wonder.

I ended up leaving early. I have a slightly distorted sense of duty, mostly because I have to get these entries back to Toronto for publishing on the website. And hey, for 15 minutes of fame, I certainly will go that extra mile. It’ll probably be my only chance.