Thursday, 12 September 2002
[This entry written by Geoff Sowrey, ©2002 Canadian Broadcasting Corporation (CBC). Text used with permission of CBC. The opinions expressed within do not necessarily reflect those of the CBC, employees, affiliates, or subsidiaries.]

Most Canadians have heard of Biggar, Saskatchewan. Well maybe they haven’t, but I’m sure they know someone from Biggar. It’s the home of Olympic gold medal curler, Sandra Schmirler. While I doubt that’s what brought us to the small town of barely 2,500, we more than happy to have visited.

Colleen Jones joined us this morning to do her broadcast. Because her broadcast is featured from 06:00 to 08:00 Eastern time, many of us were up at 03:30 Biggar time to set up stairs and access to the museum, turn lights on, and be available in case something is needed. Luckily, I was not up this morning. We’ll be pulling early mornings for the next couple of days (my turn will likely be tomorrow). 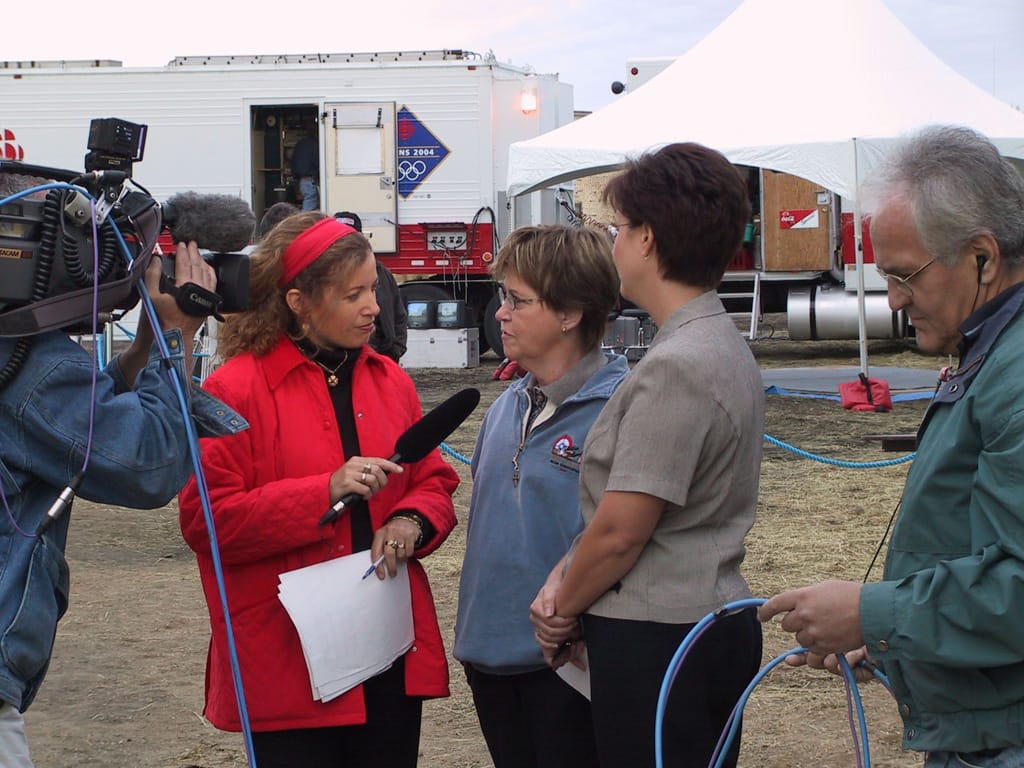 Although we were to start at 09:00, people started arriving at 06:30. We started early. I guess there’s not much to do in Biggar, and something like this attracts a lot of attention. By the time I woke up, at least 30 people had already toured the museum. We were such a large attraction that entire classes of children appeared in small school buses to view the exhibits. I wished we could have done a full event.

The kids knew we were coming to Biggar. They’d seen the information on CBC’s website and made plans for it. The interesting thing is — the town of Biggar didn’t know until not long before we arrived. Had the town known, so they told us, we would have waked that morning to a home-style pancake breakfast. While we loved the VIA food, there’s something to be said for pancakes. We turned like ravenous wolves on the management to make sure that succeeding towns knew we were coming. 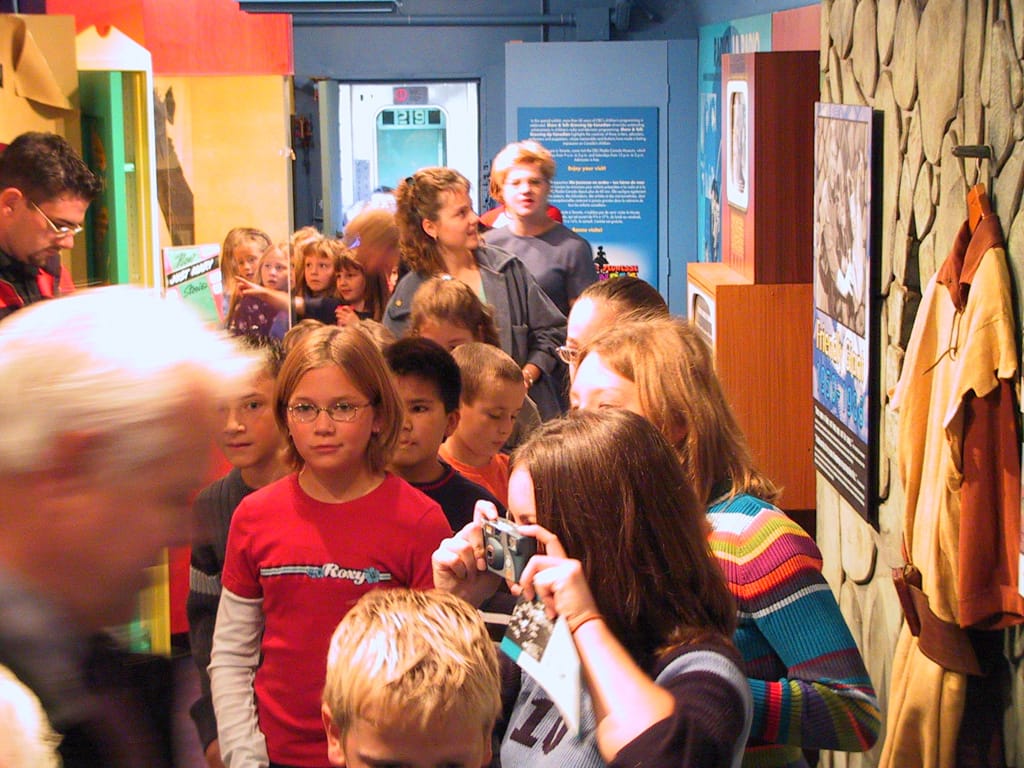 But the major and the town council still showed up. I’m not sure if they’d found out we’d be there through "official" channels, or if they’d been asked to come down for Colleen’s broadcast. All I do know is that the mayor gave each of us pins and keychains bearing the town’s slogan: "New York is big, but this is Biggar".

The town’s slogan is actually the result of a joke. An American survey crew visiting the town in 1909, after spending a little too much time in a tavern, wrote it on a sign. But instead of being offended, the townspeople rather liked the idea, and adopted it as their own.

Frank Leahy and Friends were in their element here. In most places, they have people who like the music, tap their feet, and listen. Here, the people participated. Frank even dressed up in a light blue plaid shirt and jeans for the occasion. Kids visiting from one of the schools even got the band to play the theme to "Hockey Night In Canada". Definitely a different tune when played with a fiddle.

Due to the lack of activity at the train, I took the opportunity to find the Sandra Schmirler park. Asking a woman whom I thought was native to the area, I not only engaged myself in riveting conversation but also found someone to drive me to the park. It turned out that the woman and her husband were not from Biggar — they had driven over an hour from North Battleford just to see the train. (But they weren’t the long-distance champions. Some people came over six hours to see us.)

The Sandra Schmirler Olympic Gold Medal park is subdued. Somehow, I doubt Biggar nor Sandra’s family would have allowed it to be any other way. It’s a children’s playground. Biggar wanted a nice, safe playground that everyone could enjoy. It’s large. I wish I had a playground like that growing up. The park will serve many generations of Biggarites (Biggarians?) to come.

Biggar has got to be the most friendly place I’ve ever been. Everyone is happy to see you. And if you look like you’re lost, people will not only direct you, but offer to drive you to where you want to go without you having to ask. It’s difficult to say "no". Walking back to the train was difficult. Not because it was far, but because I had to politely refuse rides from nearly every car that passed. Biggar’s hospitality is near-legendary, and for good reason. The walk back also gave me a chance to see small town Canada more closely. Living in places such as Toronto, Ottawa, Vancouver, and Calgary, I rarely get to see what rural Canada is truly like.

I walked down Main Street (missing the Biggar Museum, only because I didn’t know about it), taking in the glory of Biggar. Think I’m joking? Then you’ve never been to a small prairie town. There’s a calm, relaxing air about this sort of a town. You feel calm, and completely safe. These people probably don’t even have locks on their doors. They don’t know the troubles or the pressures of the big cities. That kind of peace is hard to find.

At the foot of Main Street is the railway station, originally built by the Grand Trunk Northern Railway in the early 1900s. It became a CN station when Grand Trunk was taken over, and used until CN abandoned its passenger service and VIA took over. CN closed the station, forcing VIA to a small "hut" next door, which served barely more for a ticket office and waiting room. In 1995, the VIA station was closed. VIA no longer serves Biggar. It was apparently quite a fight to get the train to stop there.

I found Angela and Tracy standing on the road in front of the station, holding one of our CBC signs. Apparently, we originally were to stop at the station, but due to logistics, ended up on the south side of the yard, next to a fertilizer plant. Tracy and Angela were directing traffic to the south side. But only Tracy was wearing her black CBC crew shirt — Angela was sporting the newest fashion craze: a T-shirt emblazoned with the Biggar town logo. The woman parked next to them told me I could find her back at the train, which was where I left my wallet.

While taking photographs of the old Grand Trunk Northern railway station (I love the look of old railway stations), I ran into my friends from North Battleford. Again, they offered me the chance to ride back to the train. Our train was on the opposite side of a very large rail yard, which I could only cross about a kilometre away. This time, I accepted. It was either that, or risk crossing the tracks. And it’s a big yard.

Biggar is a major divisional point on the Canadian National Railway. It used to be much larger, featuring a large roundhouse, car shop, and bunkhouse. Today, it’s a crew change location — CN maintains a newer modern bunkhouse on the north side of the yard. The roundhouse still stands, but today houses a turkey farm that processes 100,000 birds every year. (Luckily for us, it was empty for our arrival. We were told the smell is something to behold. The mayor had been extremely annoyed when he found out we were being sided downwind from the farm.) 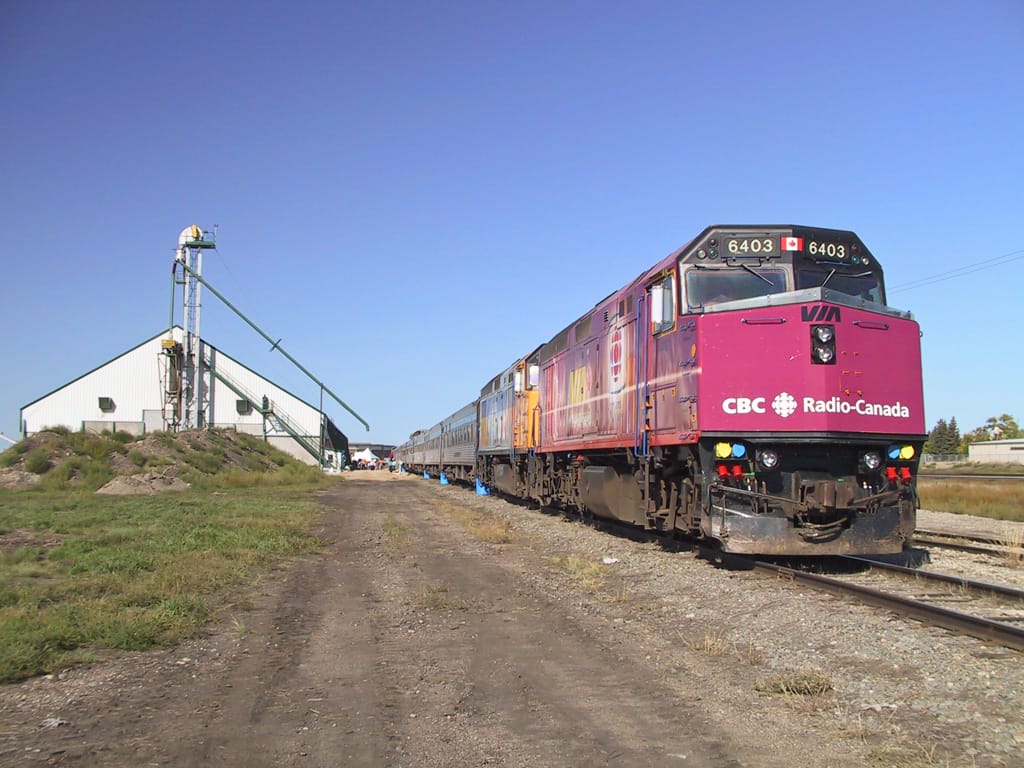 Eleven o’clock arrived too quickly, and time to pack up again. We wanted to stay around longer — Biggar was such a nice place, and we were certain we could entertain the entire town. But schedules must be kept on a railway. It was off to Saskatoon.

The VIA station in Saskatoon is in the south end of the city. On one side are a few houses (mostly industrial space), the other farmland. But the platform is large, and the station building available. Although we had no show in Saskatoon today, we did get an early start for tomorrow. It’s a seven hour show we’re putting on, and the less time we spend setting up, the more energy we’ll have.

Colleen wants to broadcast from the train again tomorrow, and wants to showcase the New Media set up. That meant we had to do a complete set-up so we’d be ready for tomorrow morning. Or rather, so Colleen would be ready. And I need to be there. I wasn’t really asked to be there, at least not directly. Funny thing about responsibility, though — it’ll get you out of bed at really early hours of the morning. I might not be a full employee of the CBC, but I want New Media to look good.

By 17:00, we had set up what we could and cleared out for our hotel. Showered and feeling better, several of us headed down the road to a railroad-themed restaurant, where we indulged in good dinner and great conversation. We started off strong, but towards the end we were beginning to drop like flies. Neil was the first to exit, nearly falling asleep onto his steak.