Wednesday, 11 September 2002
[This entry written by Geoff Sowrey, ©2002 Canadian Broadcasting Corporation (CBC). Text used with permission of CBC. The opinions expressed within do not necessarily reflect those of the CBC, employees, affiliates, or subsidiaries.]

A year ago today, North America’s security blanket was ripped away, and we were thrust into the global issue of terrorism. Today was a solemn day — one that Canada has been working towards for a week. Even before I left Calgary, there had been talk of "September 11th", or "9/11" as I’ve often heard it. Funny how the media likes to place "cute" names on something so tragic.

I wrote of the event. I wrote how I’d seen people I’ve worked with for two years left in a complete daze, how little work we actually accomplished, and how I’d spent hours in front of the television when I’d got home, just so I could see the same horrific images over and over. Suffice to say, I had more than a few moments of pause a year ago.

Today is considerably different. No-one mentioned anything about today’s anniversary. It wasn’t acknowledged by anyone with the CBC or VIA. At least, not on the train. The broadcast media, CBC included, did do their part to mark the occasion; we did not acknowledge the CBC’s anniversary — we simply moved on with our day. I didn’t even really remember the date until later in the day; but I heard not a peep from anyone.

I know what you’re thinking: How could I possibly forget? As bad as it sounds, I was a little preoccupied with a few problems on my laptop that needed resolving. Remember the problem Daryl had? Just when I thought I’d had the problem licked, it hit me too.

I had to get my computer fixed. I needed to get caught up in journals and photos to upload to the New Media group for the website. But with my system giving me trouble, writing was a significantly larger challenge. Especially with the looming departure deadline. This didn’t exactly make me a happy camper.

The process I’m currently using is one we’d worked out some time ago. I take a template, write out the text, insert the images, and then upload the files to the server to be seen. But editing the template has been extraordinarily difficult, and the upload to the server agonizingly slow. It’s taken me upwards of an hour just to handle this simple task. And with limited range on the wireless systems, I’ve been running quite franticly trying to get it done.

One of the things I had wanted to do today with my free time was to visit the Alberta Railway Museum. As I’d begun in Kamloops, I was going to make a go of doing as much historical rainfanning as possible. Given, I live in Alberta — Edmonton is about three hours away from my home. But you have to take advantage of situations when they present themselves. My computer, however, needed my attention. That kept me busy for hours, not only ruining my plans, but also setting back my publishing schedule for these journal entries.

Our official goodbye to Enza took place as we boarded our vans to head back to the train. It’s amazing just how much our team has gelled since we first met a week ago. I feel sorry for Enza — she wanted to stay on, but couldn’t spend any more time away from her job. (Like myself, Enza is not with the CBC.) I can’t imagine what I’d feel like if I’d had to leave early.

We left our hotel at 14:30. Having loaded the night before, there was little to do but climb aboard and settle in. I continued to wrestle with my electronic arch-nemesis until we were out of Edmonton’s wireless communications range. While I did lose out on the wireless connection, I did win the battle and restored functionality to my computer. That earned me my first break in the day.

The single largest problem the crew has when we’re on the train is entertainment. We often have long stretches of time between stops, and time before bed, with little to do. Some read books, some listen to music, others play games. Remember, we’re in a ten-foot wide, nine-foot tall steel can with windows. There’s not much in here, and for a generation brought up on television and living with Internet addictions, idle time is painful. 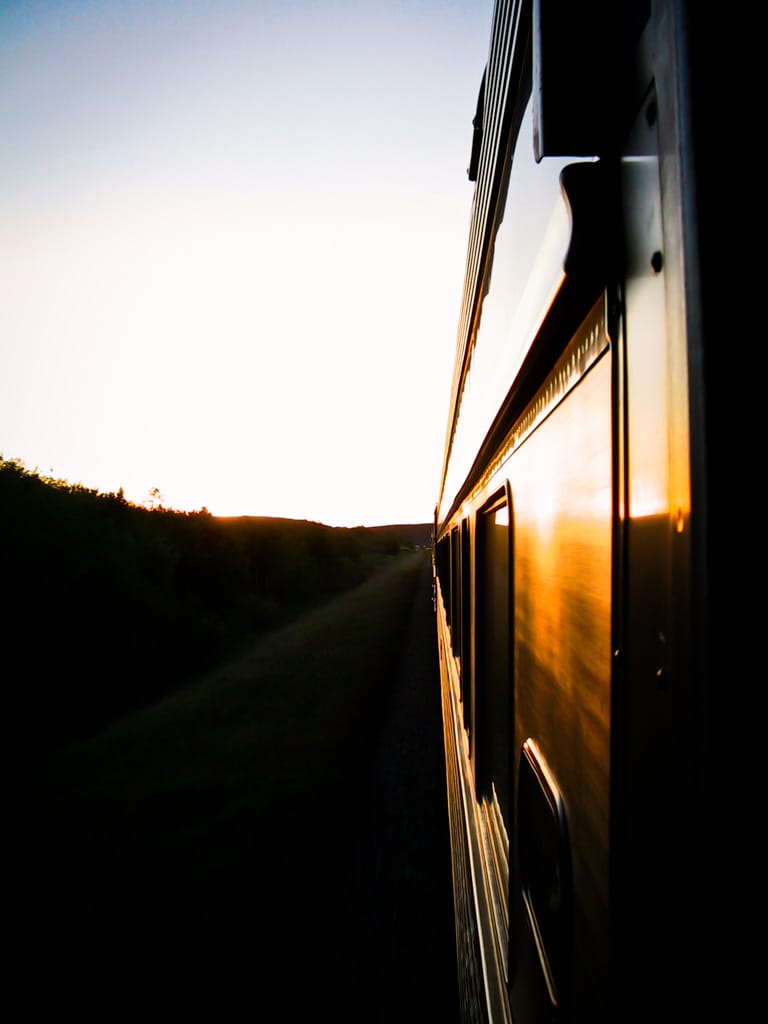 Tonight, we decided to do something different. One of the advantages of travelling with Frank Leahy and Friends is goading them into doing something. Tonight, we convinced them to lead a jam session in the Bullet Lounge of the Banff Park car. 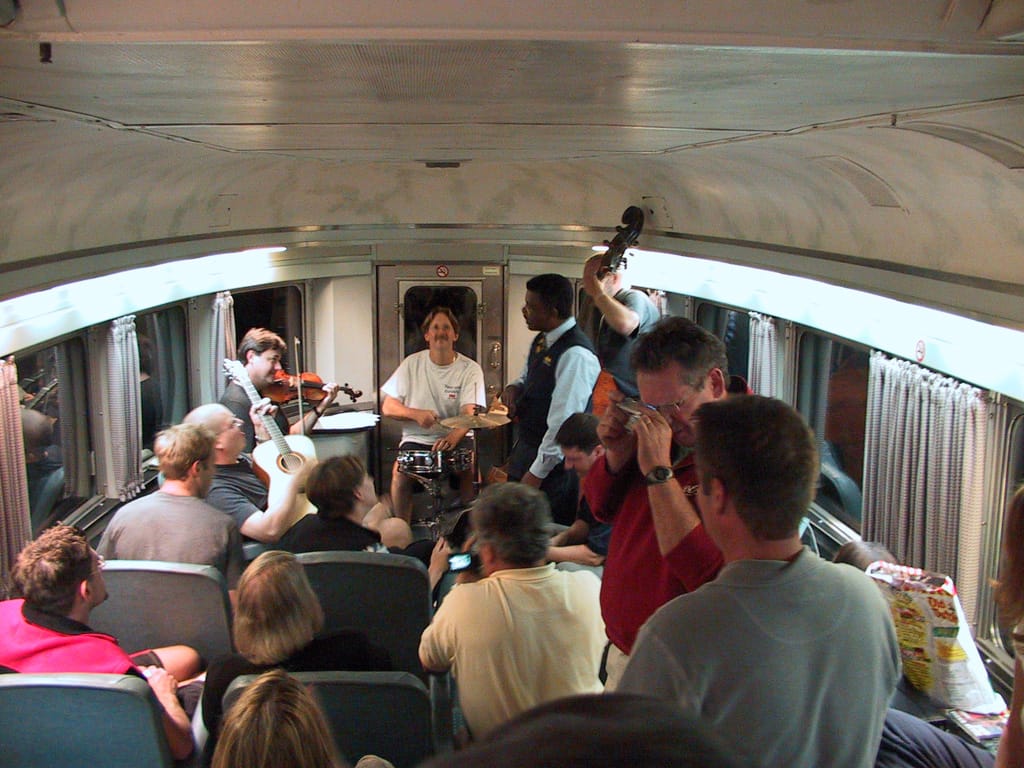 A few nights earlier, Neil had passed me a CD. It was a little bit country, and a little bit rock ‘n roll. It was Neil — an album he’d recorded. At first, I didn’t even recognize the voice. He has a singing voice that should be selling records. Tonight was a chance for him to show everyone what he could do. The rest of us joined in on songs that we knew, and picked up on choruses that were fairly easy to figure out. And we could clap along without too much difficulty.

Naturally, Daryl and his camera were everywhere. He wanted to get as much of this on film as possible. But so did Rob W., whose old-school VHS camcorder is beginning to be a familiar sight. That’s not counting the dozen or so still cameras that popped flashes for the next two and a half hours.

The band did some music on their own, and sometimes included featured guests, including Neil, and two of the VIA people: Fred and Dennis. Dennis plays with a band in Vancouver, and has the most beautiful singing voice I’ve heard in years. Of Jamaican background, he regularly pushed "Frank and the Boys" to new heights by playing reggae and rock songs. There’s nothing more interesting than listening to "Brown Eyed Girl" being played with a reggae rhythm by a band that primarily plays fiddle music.

People slowly began to trickle out after a while, until finally the small handful that remained called it a night. Tomorrow will be another long day. Colleen Jones joins us for CBC Morning, we have an event in Biggar, and we arrive in Saskatoon tomorrow night. No rest for the weary.