Tuesday, 10 September 2002
[This entry written by Geoff Sowrey, ©2002 Canadian Broadcasting Corporation (CBC). Text used with permission of CBC. The opinions expressed within do not necessarily reflect those of the CBC, employees, affiliates, or subsidiaries.]

There was a neighbourhood outside my lower berth window. As we weren’t moving, I could only assume we had arrived in Edmonton. At first I thought that maybe we hadn’t completely arrived yet — the sound of airplanes flying overhead was misleading. Further investigation revealed that the Edmonton VIA station is across 121st Street from the Edmonton City Centre airport. It’s only used for small planes. 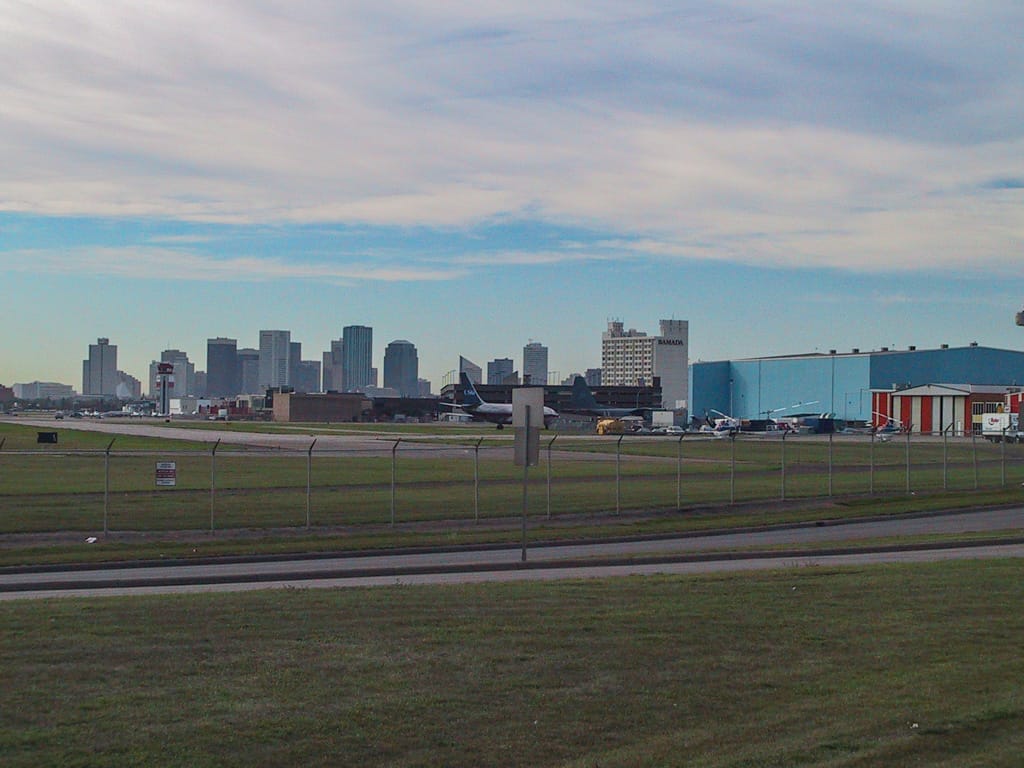 Our event would be from 15:30 to 20:00, giving us ample time to set up our tents and displays. Even then, people started arriving at 10:00. It seems that no matter where we go, people want to come early for the big show.

The VIA station has a large field next to it (for what reason, I don’t know). This was an ideal location for putting out all our equipment. The local CBC had already erected a large tent (for news broadcasts, a stage for the band, and for serving a free barbecue dinner). We filled in the area around it.

Our first injury came in the late morning. Bill, one of our technical crew, strained his knee. While not sounding serious, at first we were worried he’d popped it out. He was taken to a hospital where the injury was proclaimed a strain, and Bill was told to take it easy. There was a time when we thought we would lose Bill for the remainder of the journey. (And during take down in the evening, we really noticed Bill’s absence.)

I hopped constantly from setting up displays (I ended up leaving CJ being the only person setting up for quite some time) and doing user support. I needed to repair Daryl’s computer. Without it, he couldn’t edit video, and that would put him far behind schedule. While I was fiddling around with Windows 2002, I was also talking with technical support in Toronto trying to sort out why our wireless connections weren’t working.

I think I’m going to become a luddite. That way I won’t have to deal with computers any more. I hate computers.

While on the phone with nearly everyone in CBC’s IT department, we managed to find the culprit to our computer woes. (A very odd conflict between printer driver and the CD-ROM burning software.) Within minutes, Daryl’s computer was running again. Before I could solve the wireless problems, though, I was called back into the field to finish setting up the nine computers in the New Media tent.

More support calls. But this time to get the passwords to access the kiosk computers. Six of them had a rather annoying bug that prevented people from using our ShowVote application. An easy fix, but without the password I couldn’t edit the file. Then the Archives needed a small fix, which required another password. Unfortunately, that came too late to make this show. Next time.

Advertising had gone well in Edmonton. The field was full of visitors. For the first time, our tent was busy. Our volunteer, Rob, was outstanding. He worked almost every person coming through, managed to give away hundreds of pens and bookmarks, helped out countless people, and stuck around helping with take down. Rob even showed us a thing or two about giving things away — tucking a pair of bookmarks under the penclip suddenly meant we could dispose of even more bookmarks. We actually had to tell him to go home. I wish we could take him with us. 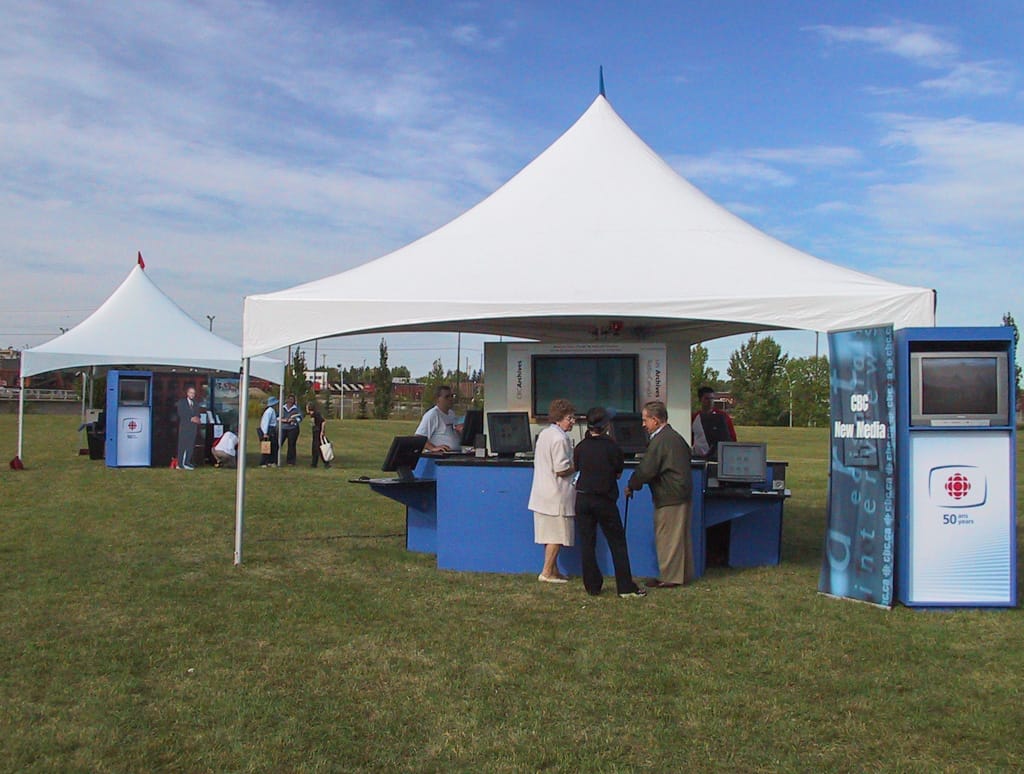 Line-ups were many. The museum line, like in Kamloops, was enormous. I don’t know exactly how many people saw the exhibits, but we estimate about 2,000 visitors walked through in the four and a half hours. The line for the free barbecue was even larger. At one point, there must have been at least 300 people waiting for their dinner. 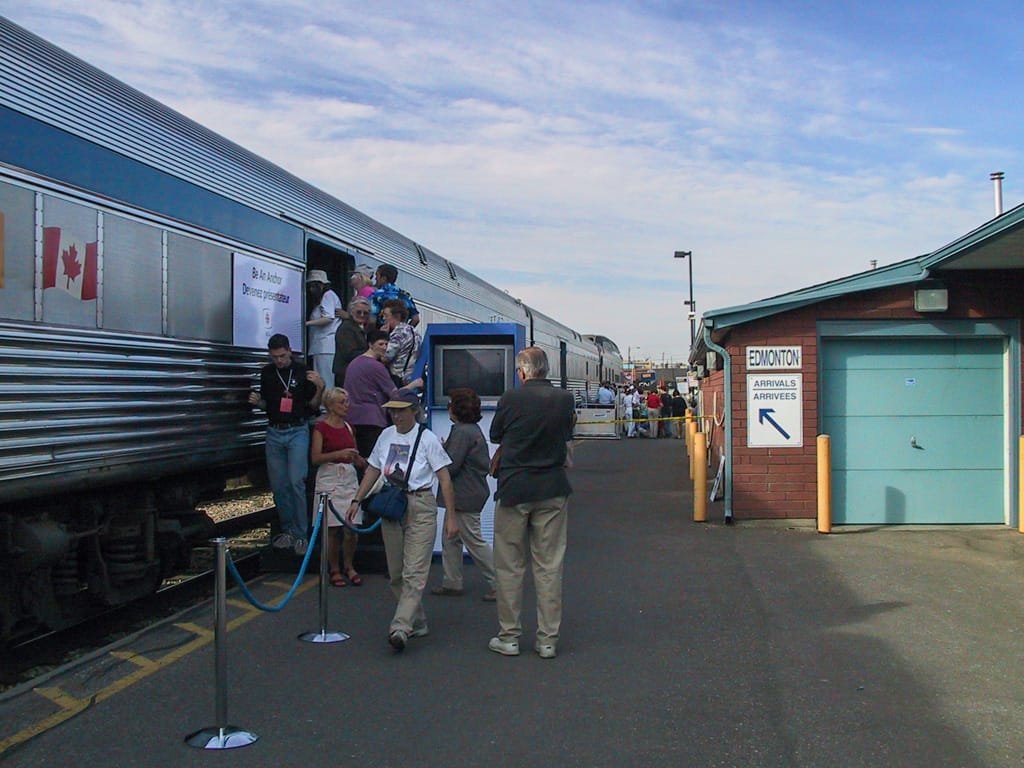 The Lieutenant-Governor of Alberta, the Honourable Lois E. Hole, came out to visit. She was interviewed by the CBC, as were several other celebrities including Dakota House (of North of 60 fame) and Sharon Lewis from ZeD.

People kept arriving, right until 20:00. I felt sad for having to turn people away. But we needed to pack everything back into the train. Although we were staying in hotel, the train needed to move from the station — though for what reason I’m not entirely sure. Either way, we’re not about to leave our equipment outside all night.

The sun set, the temperature dropped, and the wind picked up. We didn’t get much of a chance to shiver — we were too busy paking everything up, and hauling it back to the train. The crew had to pull the lights not long after it got dark, requiring flashlights to make sure we didn’t miss anything. Soon, the field was (relatively empty) and all that was left was to put everything back on the train. That was right about when my left forearm started going numb. It wasn’t from the cold — I think it’s Repetitive Strain Injury. Having spent the last half of my life parked in front of a computer, I suspect my forearms are due for total seizure before too long. Add that with hauling a lot of heavy boxes and stands around for a few hours a day...

Finally, around 23:30, we broke for the hotel. We were all exhausted. Especially Neil, who had stayed up until 02:00 the previous night until the train was in Edmonton. He slept during the drive to the hotel.

Several of us started to gather in the hotel’s atrium to sit, relax, share stories and a few drinks. We ate pretty much nothing but peanuts. The conversation was lively, and even after a hard day no-one seemed to be tired — mentally, that is. The group would carry on until well into the morning; I headed to long before them.

Tonight, we bade farewell to Enza. She is the first of our group to rotate out. Enza was one of our coordinators and Jill of all trades. When we needed something done, there was Enza. She now returns to her life in Banff. Of course, we wish her well.