Monday, 09 September 2002
[This entry written by Geoff Sowrey, ©2002 Canadian Broadcasting Corporation (CBC). Text used with permission of CBC. The opinions expressed within do not necessarily reflect those of the CBC, employees, affiliates, or subsidiaries.]

I awoke to the sun peeking through my blind. Outside, the sky was partly cloudy, the sun climbing over the mountains, and elk traipsing through the CN rail yard. It was then I remembered the morning activity.

The night before, Ivan had suggested we visit a glacier while we were in the area. Most of the group had never seen a glacier before, and it would have been shame to have the time and not use it well. I’d visited the Athabasca Glacier two years ago, but hadn’t been to any others. Besides, I’m a sucker for a side-trip. I hauled myself out of bed and went to see if plans had formulated during my rest. Ivan came through with a plan to see Mouth Edith Cavell.

I skipped breakfast, preferring to take in the gorgeous Jasper morning (the last time I’d been there, it was overcast almost the entire time), take a few pictures, and walk around a bit before our shuttles appeared. That’s not to say that our food service has not been exquisite. VIA’s Chef Paul has an uncanny ability to create a meal that could make Ghandi break a fast. (Yes, that was a pun. Deal with it.) 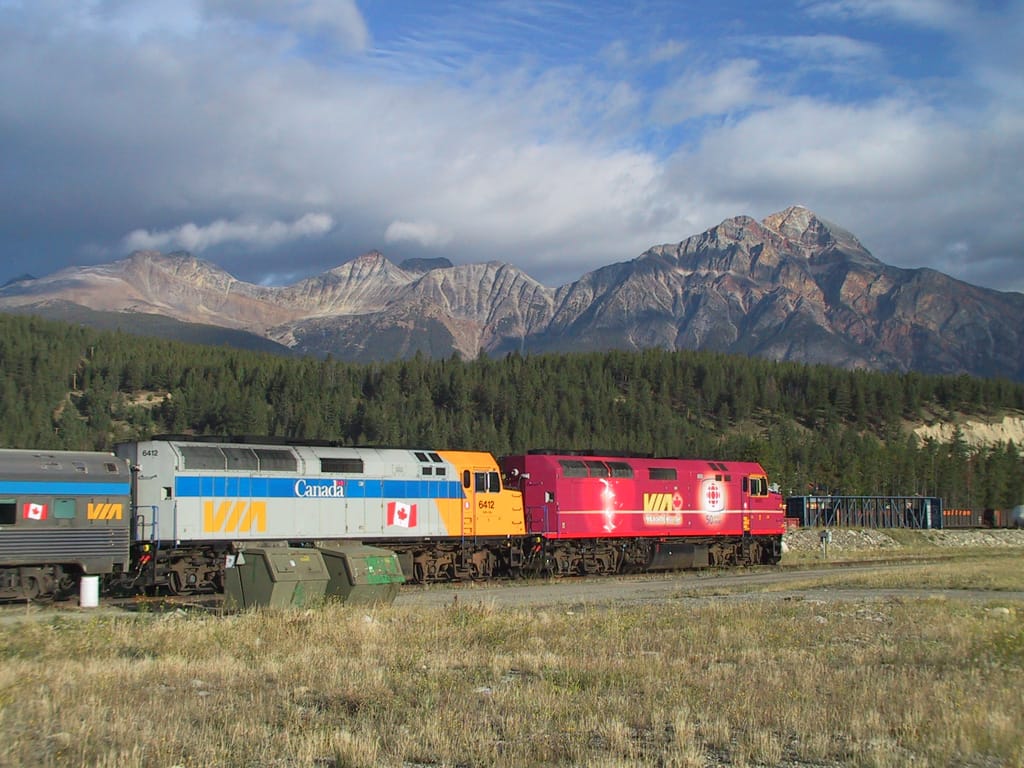 Our tour buses (vans that can hold ten passengers) arrived and whisked us away. Our guide, Murray, had been in the area for 14 years and was an expert on Jasper National Park. He began his tour as soon as we pulled away from the train. This involved local history, descriptions of flora and fauna, and stories of things he’d seen and done, peppered with answers to questions we asked along the way. And we had time — Mount Edith Cavell is fairly close to Jasper, but as it is a mountain, there’s a 45-minute trip to the start of the hike. There was plenty to see and hear along the way.

Part of the drive was along the original Icefields Parkway, built by Depression-era labourers. By hand. Back then, heavy equipment was too expensive or too difficult to use in the area. Besides, it kept hundreds of men working at a time. Eventually, the road was replaced with a faster, more modern road. The original still serves a vital connection into the mountainous areas, and allows visitors a chance to get closer to the natural beauty of the parks.

The temperature was noticeably cooler when we arrived at the parking lot near the base of Edith Cavell. We gathered into our respective groups (one per van), and headed out to the trails. One went up on the lateral morraine, allowing a spectacular view of the valley, the other along the valley floor. Both under the nose of the mountain.

Mount Edith Cavell is named for a World War I British nurse stationed in Brussels. When the German army occupied the Netherlands, she stayed behind to take care of the captured soldiers. What the German Army didn’t know was that she was also smuggling them out through an underground railway to safety. When the German Army found out what Edith was doing, she paid for her courage with her life. In tribute, the Canadian Geographic Board renamed one of the most majestic peaks in Jasper National Park in her name.

Once upon a time, barely a few hundred years ago, ice filled the valley. With the changes in global weather (not all as a result of global warming), the ice has receded to form two glaciers: Angel Glacier, which flows along the bottom of the valley; and Ghost Glacier, which hangs down from the peak. In a few years, there won’t likely be any glacier left. It’s almost all melted.

We met at the glacial pool. The view was unearthly. Shaped blocks of ice surrounded by jagged blocks of rock, a brisk wind, diminutive trees, and huge walls of rock and ice towering over our heads. The Athabasca Glacier had been a new experience two years ago. I didn’t think Edith Cavell would be much different. Instead, I’ll say it’s something everyone physically capable should see. 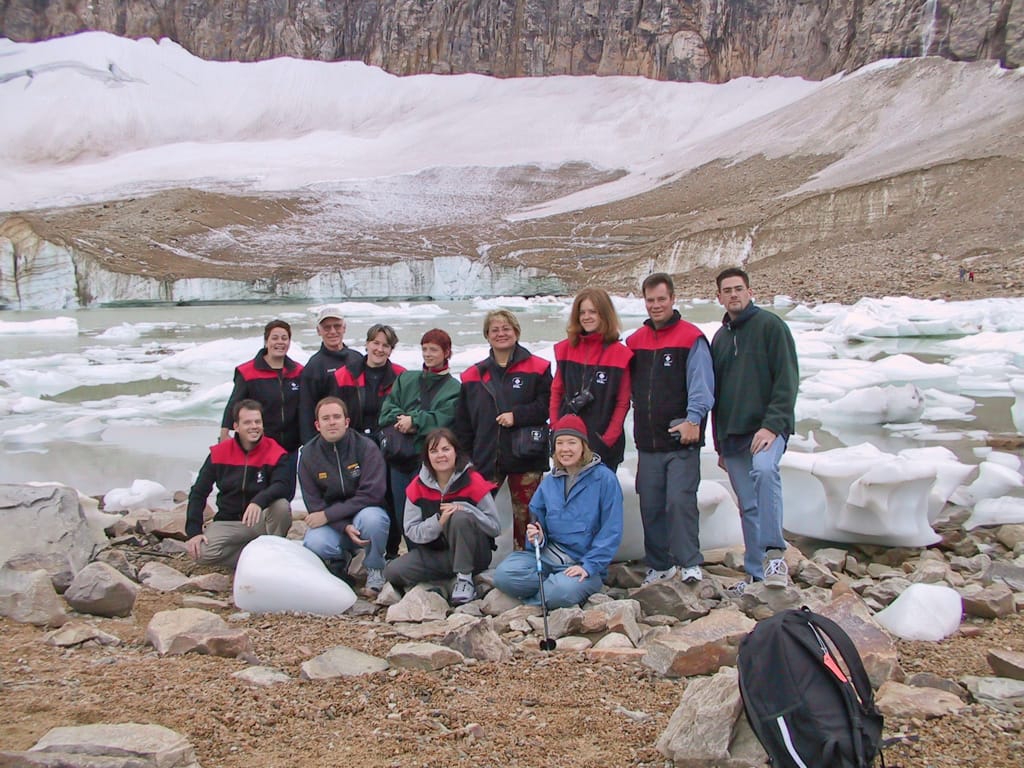 Having a time restriction, we couldn’t stay too long. After a few minutes at the pool (and retrieving a few stragglers who were venturing too close to the glacier’s edge), we made a hasty return to the train to begin set up for our afternoon event. It would be almost the same as the Kamloops event, just with a different station and train configuration. The trick was that most of the equipment we needed for the event was on the wrong side of the yard. A borrowed cube van solved that problem.

While the others headed off to set up, I started trying to resolve a problem with our network connectivity. Among my duties is system support, liasing with the IT group in Toronto. CBC has spent a large amount of money trying to get us wireless network connectivity across Canada. However, we haven’t had a wireless signal since Vancouver. A few people were anxious to check email. Nearly two and a half hours of phone calls produced little more than an earache. It wasn’t IT’s fault — Telus, it seemed, didn’t have a compatible wireless network in Jasper.

The earache became a major headache when Daryl’s computer began misbehaving. Oddly enough, about when we were testing the wireless connection using his system. (Daryl and I have the same model of computer. In fact, mine is a mirror of his. It’s meant as a backup should his ever suffer a catastrophic failure. My system, thankfully, hadn’t had the trouble Daryl did.) Soon, he was almost entirely unable to work on his video clips. Having a background in user support, I used my bag of virtual tricks to try and fix his laptop. But it rebelled, and soon I had to give up, lest I destroy his work. We will need to address it in Edmonton.

Leaving the train, I headed over to the event to take pictures and help out. But help was not needed. Due to confusion in advertising, the event wasn’t properly promoted in Jasper. The crowds we expected were not to be had. We did attract a lot of tourists (especially when Frank Leahy and Friends were playing), but few of them had even heard of the CBC.

The afternoon passed slowly. It drizzled periodically for flavour, and didn’t really ever get that warm. Rose wandered the streets passing the word. Debbie donned the Franklin the Turtle costume for the kids. (She tragically fell to the adolescent male dream of kicking a costume character in the groin. Luckily, she found it humorous. Hysterical, actually. To the point where the only reason she had to get out of the suit was that she couldn’t stop laughing. Roger didn’t find it even remotely funny, and cast a bone-freezing stare at the boys when they came through the museum. He refused them access to "Be An Anchor" until they’d apologized to Franklin.)

One thing that filtered out during the day was some of the previous night’s activities. (You hear all sorts of interesting stories as the day moves on.) Most of the crew ended up at the Athabee — that much you already know. It’s what happened after we left... The group I was with managed to get back to the train. No harm there. The thought of looking for a bear apparently didn’t last long, and soon was abandoned. But that was us ... the remainder of the band, however, had an interesting night.

The story, or at least as I understand it, was that the band returned to the train after us. Only they didn’t take a taxi, and didn’t know the route around the rail yard. So they went through the middle of it, just missing an incoming freight train. They found their luck had held when told (upon reaching the train) that they had narrowly missed meeting a bear in the darkness of the yard.

We mercifully closed down at 18:00, allowing us to get packed up and wait for the train to reform at the platform. Don’t get me wrong — Jasper was really nice. But with so few people out in attendance, we really had very little to do. It was mostly for boredom that we wanted to pack up. I think all of us were concerned this might become a trend. 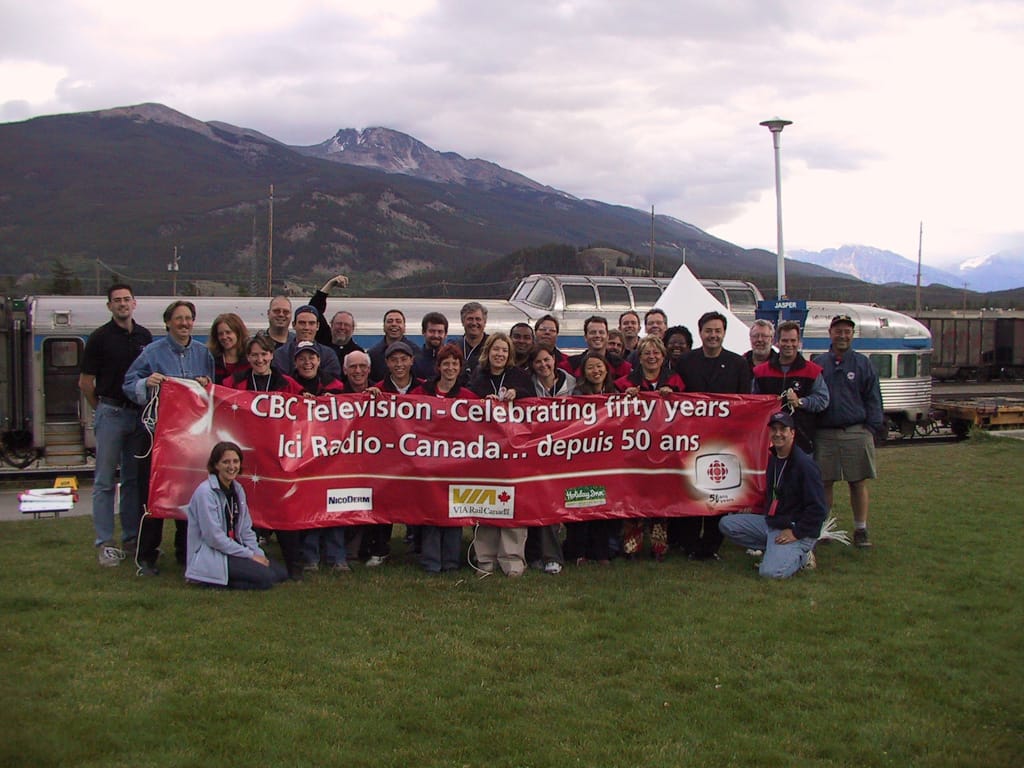 The train pulled away from the station a couple of minutes behind schedule, and headed on its way eastward through the park. This was a stretch I’d wanted to see since my trip out last October. But sadly, it was dark by the time we’d reached Jasper Lake. It was too dark to see the Prairie Creek Trestle at all — though we could hear it very clearly. We passed Hinton without fanfare (or notice) and I was barely awake enough to spot Edson.

Tomorrow is another day, and another full event.