Sunday, 08 September 2002
[This entry written by Geoff Sowrey, ©2002 Canadian Broadcasting Corporation (CBC). Text used with permission of CBC. The opinions expressed within do not necessarily reflect those of the CBC, employees, affiliates, or subsidiaries.]

Most of us didn’t go to sleep right away. We may have climbed into bed, but those of us with windows opened our blinds, and watched the stars, the curving of the train, and the hollow blackness of the tunnels. The sharp blats of the horn echoed eerily in the treed valleys. It’s not a sound we’re used to hearing. All of this left us a little groggy when we awoke to the rising sun. Our train had arrived during the night, parking at the Lorne Street train station in Kamloops.

Kamloops was our second show. This time we would only open the museum cars — what we called a partial event — we did not have enough time to do a full event. Even with the lessened load, we still had to set up stanchions, signage, and stairs in and out of the cars. It was a far easier show than the full event, for that we were thankful.

Like with Vancouver, people arrived before we were ready. A lot of people in Kamloops are CBC fans — we soon had a line of hundreds of visitors. We were expecting the smaller communities to have proportionally larger turnouts, but this was a pleasant surprise. 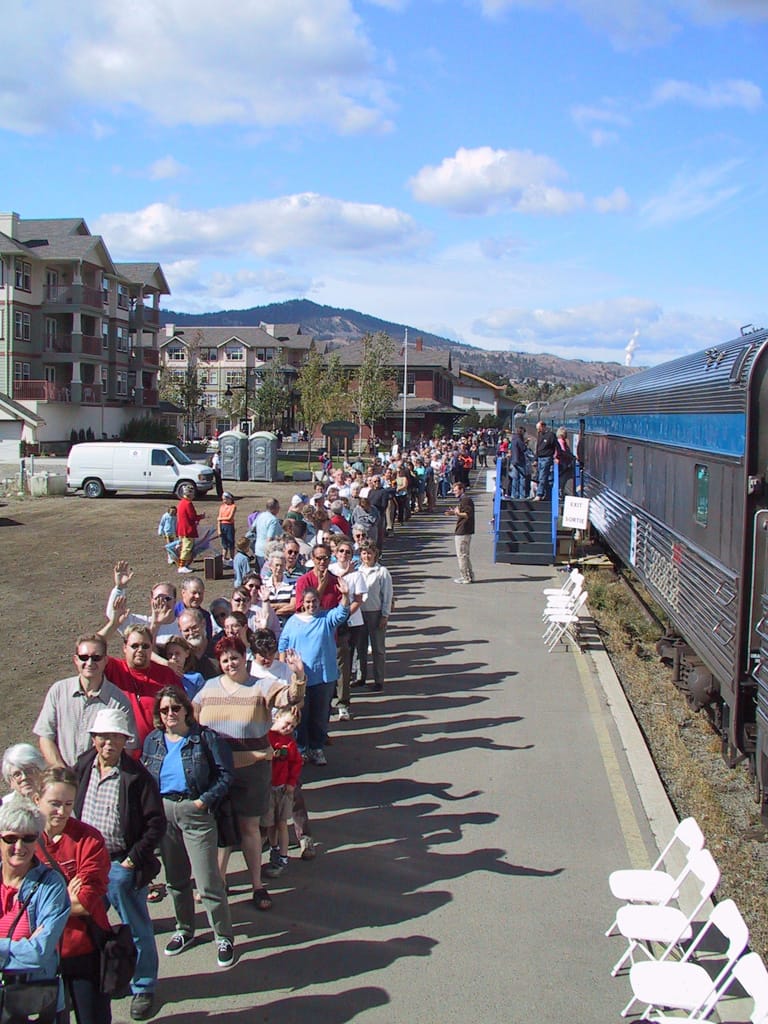 My job for the day, not having a group of computers to watch over, was greeting visitors and handing out stickers and tattoos for the kids. This was a welcome change of pace. The New Media tent is a little quiet, so having to welcome passers-by opened the door for conversation. Stefani and I guarded the north entrance, welcoming people and answering questions. It was also a chance to get to know another new friend.

About an hour after the event began, I started my photography circuit. One of several duties, I take all the pictures for the website and for archival purposes. As I took pictures of the stage, I happened to notice an otherwise innocuous number just to the left of the stage’s awning: 2141. One of my personal tasks as this trip proceeds is to find vintage railway equipment. This was my first find: ex-CNR #2141, a 2-8-0 Consolidation steam locomotive.

Entering the office, I inquired about the possibility of seeing the engine before the train left. Unfortunately for me, today was supposed to be an operational day for 2141. But since we were sitting at the station it would use, there would be no steam on the tracks today. Luckily, one of people in the storefront was the wife of one of 2141’s mechanics. She graciously volunteered to take me over to the train, housed in a shed barely 100 metres from our train.

In retrospect, I wish I had taken my camera with me to take pictures of Julie and Neil’s faces when I asked if I could disappear for 15 minutes to take pictures. It was perhaps the most incredible look of "What???" I’ve ever seen. Up until that point, I don’t think either of them really knew just how much of a rail fan I am.

For the last eight years, the Kamloops Heritage Railway have toiled over rebuilding the engine to working condition. It had been on static display in Riverside Park for 33 years, and needed a lot of work. When donated to the KHR, they had to reduce it to spare parts and start almost from scratch. Many of the parts had to be rebuilt. Just last year, the engine was moved to its current home where the Heritage society keeps loving care of it.

The firebox was still warm from yesterday’s excursion. Every unpainted metal surface gleamed. (6060’s surfaces, by comparison, need a lot of cleaning and polishing.) I marvelled at the craftsmanship the Kamloops Heritage Railway had put into the rebuilding. 2141 looked like it had just rolled off the assembly line. Not bad for a 90 year-old. 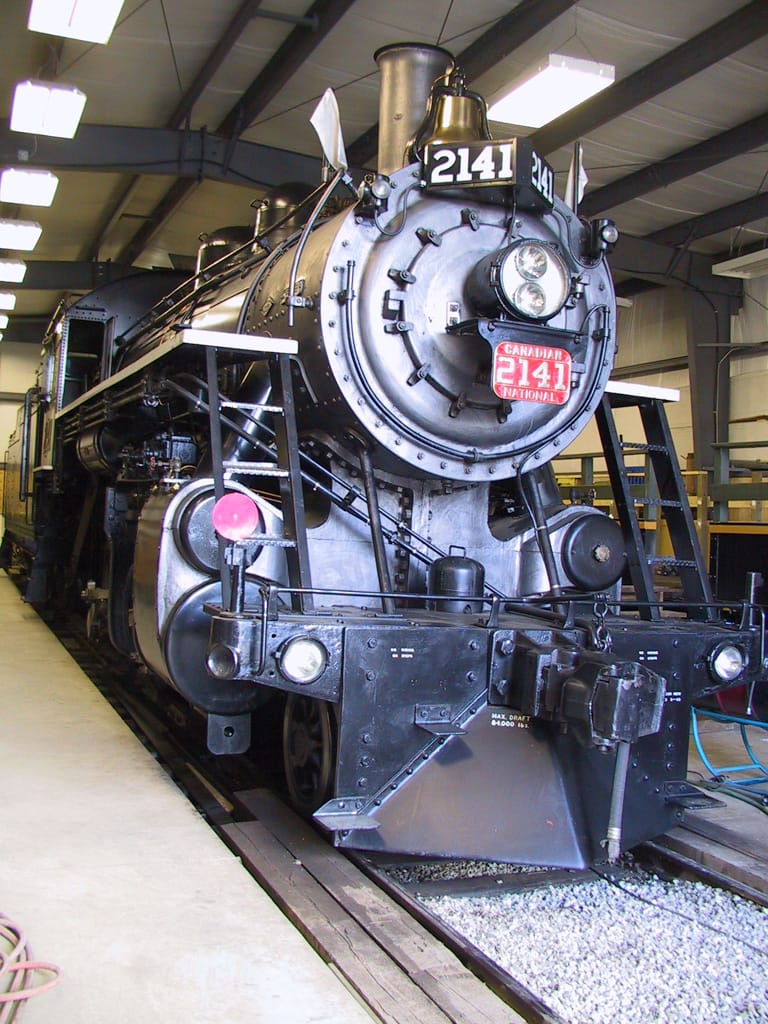 I had a short period of time, so took my pictures quickly. As I ran around the engine, my personal guide told me of the story of restoration. It was a tale I would love to tell, but there were simply too many details to remember. I need to remember to bring my notepad in the future.

Returning to the train, we left 2141 sitting proudly in its house, a little engine that did.

I wasn’t the only one working on side projects — Emma was off on a quest of her own. But it wasn’t to find a train. (I would find out later that Emma would have liked to come with me to see 2141. I’ll need to keep that in mind when we get to Montreal.) She was looking for the nearest bar. It sounded like a really good idea — get in a quick drink, and then off to our next exotic location! Capital thinking, I say. 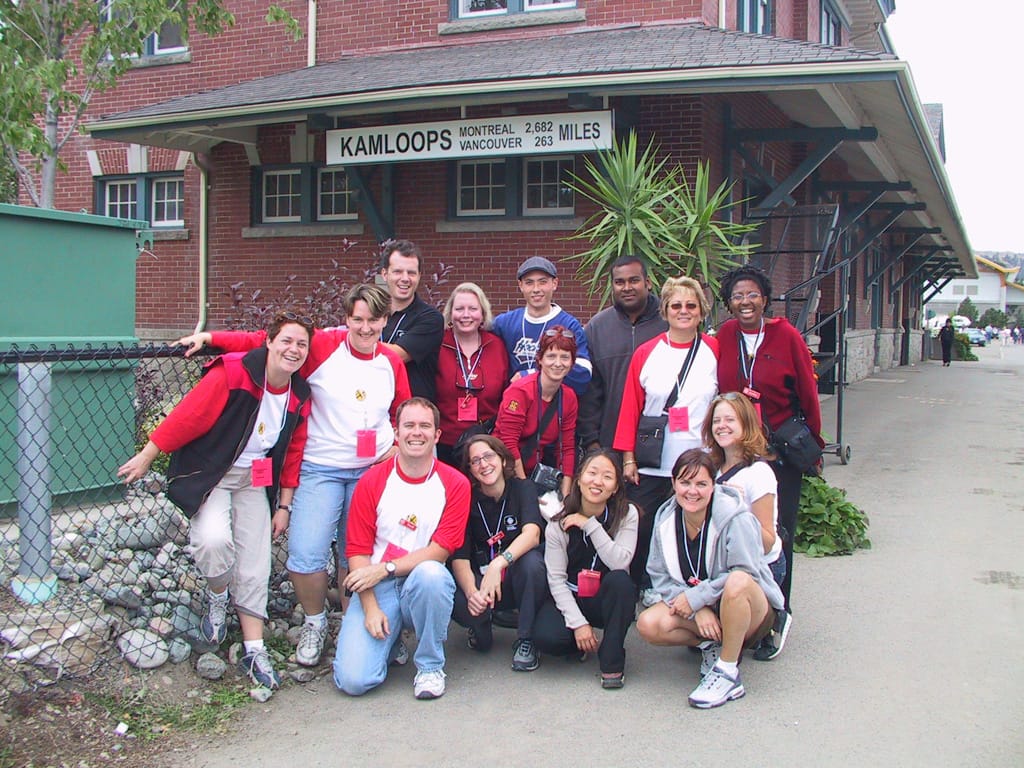 The line-up had continued to stretch during my time away, and we were only open for another hour. We felt sorry for those who wouldn’t make it into the museum before we had to close the doors. In hopes of lessening broken hearts, we started telling visitors that they might not be able to see the museum. Very few turned away. When the doors did finally close, those who were turned away were understanding. In all, we think about 1,200 people managed to go through the museum in the three hours!

Being such a small event, we were able to pack up our things much more quickly. Within an hour, we were ready to leave. Only mid-afternoon, we were promised glorious sights as we headed into the mountain passes.

So, of course, it rained.

There’s something strangely comforting about rain. We sat in our cars, working, resting, playing, and glancing out through the water-streaked windows. The rain seemed to make the forests pop into life and the mountains to gleam. Everyone fell into a relaxation that made it feel like we’d been together far longer than we had. A few people read, some glanced out windows, Patrick even did some magic tricks. Apparently, he did a stint with the Cirque du Soliel! 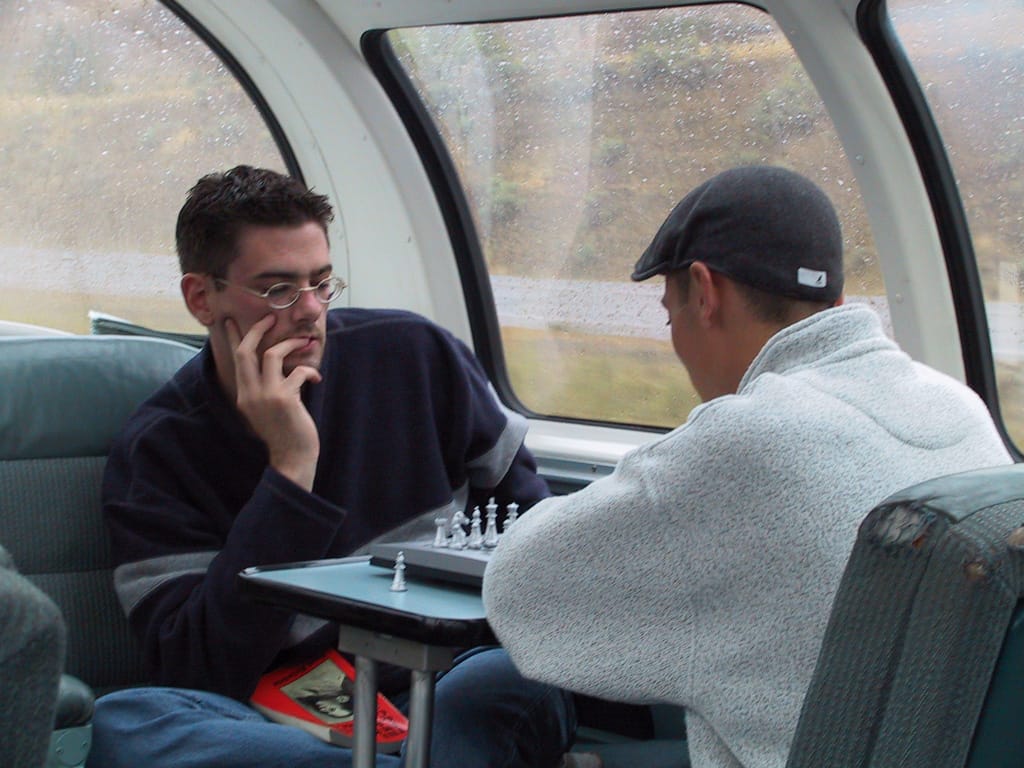 I spent some time in the dome, sitting near David and Paul. The two of them stared out the windows like the rest of us. But instead of looking for scenery, I think they were scanning for a punchline. Sure enough, it came when we passed a field full of horses. Paul’s comment: "[Those are] funny-looking cows..."

The train snaked its way through the forests, stopping periodically to let a freight train pass. The rain dwindled as the light faded. Just before it got too dark to see anything, we were fortunate to pass Pyramid Falls. Too dark for a clear photograph, I opted for a short snippet of video. Daryl, our videographer / video producer, got a similar pass with his video camera. I can’t wait to see how clear his version is.

We arrived in Jasper at about 23:00 MDT, well ahead of schedule. This left us ample time to have nightcap. When word circulated that bars were open until 02:00, almost the entire CBC crew fled to the Athabee — a bar in the Athabasca Hotel. The band nearly tripped over each other trying to get out of the train. I couldn’t move fast enough (we had to shut down all our computers so the train could be split), and had to wait until everything stopped moving.

I waited for Neil, Julie, and Debbie to get everything sorted out before we walked over. As we waited, the VIA crew split the train. This doesn’t sound like much, until you’re near the brake line. It’s a loud bang when the line couplers come apart and the air-pressure explodes out. I’ve heard it many times. Debbie, however, had not. The sound caused her to leap about four feet in the air, near-screaming a Newfie blurt of surprise (something like "Geezusmarymurphy!"), leaving Julie, Neil, and I doubled over laughing.

Confusion soon reigned. Julie and I somehow managed to lose Neil and Debbie. Then we couldn’t find everyone else. We checked surrounding bars, just in case. Nothing. We did find Richard, though, who had decided the bar wasn’t for him and was heading back to the train. We did eventually find the team, though, buried in a corner of the Athabee lounge. There we remained until roughly closing time.

Our group, not only the CBC crew but also Frank Leahy and his band, are a lot of fun. There’s nothing more frustrating than travelling with people who don’t enjoy the journey. Part of every journey is stopping and smelling the roses. While we weren’t smelling all that great when we left, the time we spent sharing silly stories and making fun of each other was well worth the lost sleep we would experience.

Things got more interesting when we tried to get back to the train. While we were at the Athabee, VIA cut the train in two pieces. The museum cars, the Banff Park, and the generator flat car were left at the station platform. The rest of the train, including our beds, were on the south side of a large, busy rail yard. As we left the train, VIA told us how to get back. But we couldn’t find a taxi, let alone the three or four we’d need. So we walked.

It’s a long walk. You can’t (nor should) walk through a busy rail yard. That’s just asking for trouble. (Trains can come in very quickly, and without warning. Cars in the yard can start moving without sound. And you can’t see all the nasty stuff sitting on the ground.) Having run around the Jasper yard from my trip with the Rocky Mountain Rail Society last October, I knew where we were going and how to get there. Wearing only a T-shirt in the nippy night air just made the trip a little more urgent.

A few people in our rather large ensemble decided, upon arriving at the train, that they needed to find a bear. (The logic of drunk people is just stunning sometimes.) Knowing much better, I crawled into bed, and was soon dreaming of trains.