Saturday, 07 September 2002
[This entry written by Geoff Sowrey, ©2002 Canadian Broadcasting Corporation (CBC). Text used with permission of CBC. The opinions expressed within do not necessarily reflect those of the CBC, employees, affiliates, or subsidiaries.]

I awoke this morning feeling quite drained from the last few days of toil, and the previous night’s sake. But within minutes of my rising, adrenaline was already flooding my veins. It was going to be a good day. That was assuming the weather held. It wasn’t looking very promising glancing out the window. The Weather Network said it wouldn’t rain. I wasn’t too sure. Many times I’ve seen the forecast proven wrong in Vancouver.

Breakfast was early, and fast. We had to be checked out, with our bags at the train this morning. We would have no time to return to the hotel to get anything. By the time we arrived at the station at 7:40, the technical crew had already started pulling out our equipment. We had until 11:00 to get it all set up before the crowds started arriving. Though we had done it only once before, set up was becoming a practiced routine. We had little worries of making our deadlines.

Through the chill of the overcast morning, we pitched tents, set up tables, erected stands, powered computers and televisions, and set out the giveaways. We didn’t have to wait long — the crowds arrived and were lining up before we were done. I’d been expecting more of a sudden flood of people as the doors officially opened, but that never happened. People just started showing up. Before long, we had people everywhere. It was a bona fide event. 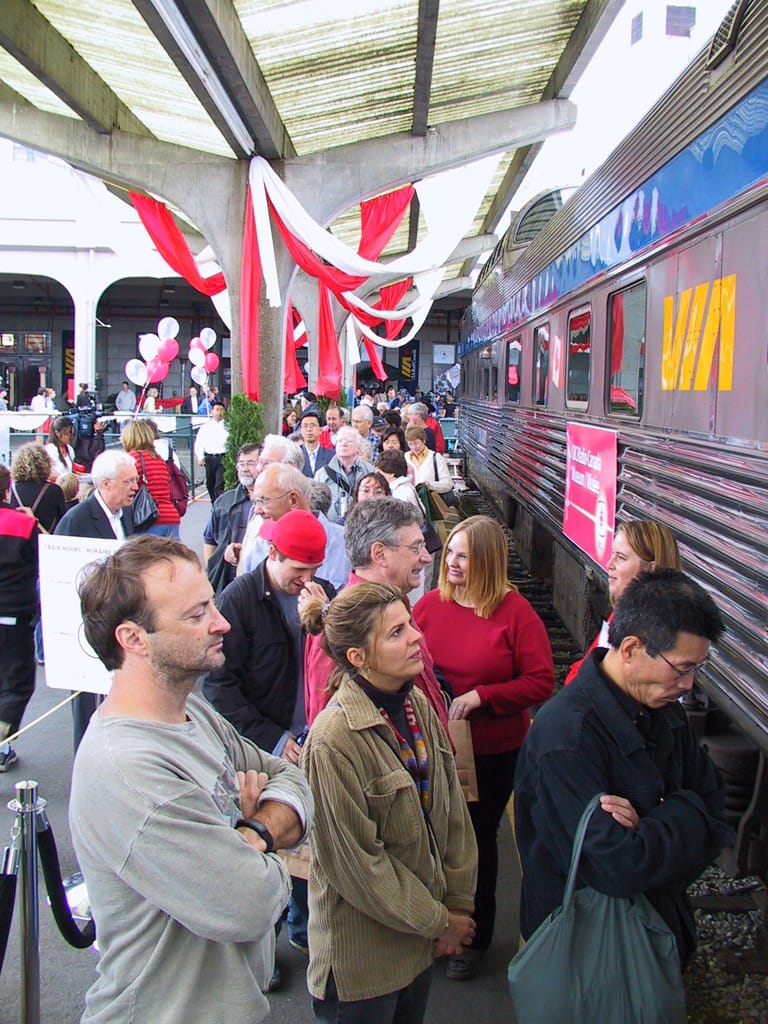 It looked like a small carnival. Only without animals. And rides. We had clowns, though, and lots of performers. So all in all, it wasn’t too far off. The show drew out friends of mine from Vancouver, including my friend Joel and his family. Joel nearly cried when he saw the Friendly Giant’s castle, and was thrilled to meet some of the local CBC celebrities. Joel is possibly the largest fan of the CBC I have ever met. And he doesn’t even watch hockey...

Celebrities weren’t exactly out in droves, we had a lot more than I thought we would. The cast of Edgemont (a show that, admittedly, I’ve never heard of) were signing autographs. Not far away was the cast of Royal Canadian Air Farce. Brian Williams frequented the Sports tent, when he wasn’t wandering around meeting people. There was also another sports icon, whose name I’ve already forgot.

The next five hours flitted by like hummingbirds — bobbing, weaving, and very quick. During that time, we entertained several thousand loyal CBC viewers and listeners. The only way we really knew time was passing was when bands changed. Most were good, but didn’t attract a lot of listeners. One band, Cherry Bomb, got attention by playing "Time After Time" and had people guess who they were covering (Cyndy Lauper). A lucky fan got a free CD.

Our two museum cars, including the "Be An Anchor" exhibit were extremely popular. I have no idea how many people ultimately went through the cars, but those who did only raved about what we had brought along. For many, most my age, it was seeing the castle from The Friendly Giant, and the treehouse and Tickle Trunk from Mr. Dressup.

As the day went on, the clouds parted and the sun blessed our celebration. The temperature rose along with spirits. But time was disappearing quickly, and the crew knew it. We were excited, and also nervous. We had a huge hurdle ahead of us, and I don’t think any of us felt confident enough to say that we would make our deadline. Positive outlooks, however, do wonders.

Before we knew it, Colin James (the last performer) was taking the stage. That was our sign to start striking our sets. We had to take things apart discreetly, as not to interfere with the concert. It was a little tricky, though — we had to make sure our equipment was protected until collected for the train.

When Colin James finished, the remaining crowds started to disperse, and we moved into high gear. The train was leaving at 19:00, with or without us. Our previous experience had told us that it would take an hour and a half to pack our equipment into the baggage car, not counting the time to strike our sets. The added complexity, however, was that we couldn’t just pack everything into the baggage car. Transport Canada rules (and VIA rules) stated we had to keep a corridor open so we could move through the baggage car.

To avoid the problems of our last repack, Neil and the technical crew created a list of items in order of loading and unloading. This would prevent the flood of items appearing at the baggage car, and would suggest what order we had to pack things up. For CJ and I, this meant we had to pack computers early on — they were packed in the dark, secure recesses of the car — so they had to go in relatively early. We won’t see our computers again until Edmonton.

We reloaded in less time. Almost. We would have if we didn’t have to create an access way through the car. The passage hadn’t existed before, and the crew had to whack together sheets of plywood and tie it all down before we could roll out. With a great deal of relief, we finished just in time for our departure.

Boarding the Skyline car, I took a place in the dome along with most of the CBC crew. Some of us were very excited to begin our historic journey. Most were just happy to sit down after another hard day’s work. (Chris was the first person in the crew to take a shower, and looked much happier for it.) I bore a grin that ran ear-to-ear. Riding on trains is something I’ve always loved, and something that gets stronger with each year. My dream of riding coast-to-coast was about to start. I felt 10 years younger.

A slight jerk, and the train started rolling forward. We waved to those still on the platform as we pulled away. We didn’t get too far, though — we needed to pick up our generator, which was waiting on the adjacent track. Once the VIA crew had done their brake test, we were officially off. 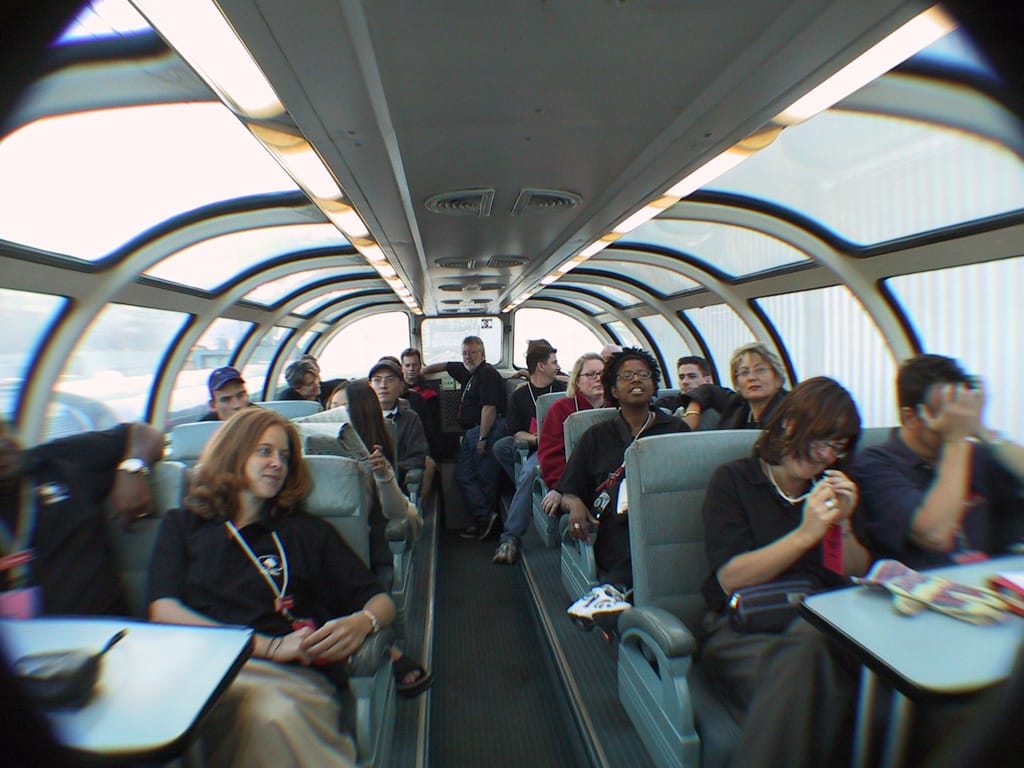 As we slowly left the yard, I started to notice people standing on hills, bridges, piles of wood — whatever could be used to look over fences. Not a lot of people, just a small handful scattered about. Train chasers. They were following the train, and taking pictures. This time, I would be the fox instead of the hound.

The trip out of the Lower Mainland has always been one I’ve wanted to take. However, the setting sun and rolling clouds reduced our visibility. It was dark by the time we reached Surrey. We never stopped looking out the window, though — everything was a wonder. We spent as much time staring at the passing lights of Greater Vancouver than we did at our dinner. I don’t even remember what it was. I think it was also a reward. After all the hard work everyone had put in, this beginning to the trip was a treat far tastier than the most decadent dessert.

Travelling with us is Frank Leahy and his band — Richard, David, and Paul. The four of them have deadly humour streaks, as we’re beginning to find out. They kept us laughing most of the way out of the Lower Mainland. Having them as trainmates is a blessing.

I haven’t been this excited about a trip since ... well, it’s been so long that I can’t honestly remember the last time I’ve been so giddy. Neil and I are almost in competition to see who’s the most childish with glee. I think he’s ahead at the moment. But then, he’s been working on this a lot longer than I have. He definitely has reason to be happy.

I think I may have a very difficult time getting off this train when we reach Halifax.