Friday, 06 September 2002
[This entry written by Geoff Sowrey, ©2002 Canadian Broadcasting Corporation (CBC). Text used with permission of CBC. The opinions expressed within do not necessarily reflect those of the CBC, employees, affiliates, or subsidiaries.]

Unlike previous days’ preparations, we would not haul equipment today. For this, we were very happy. Most of us sported bruises and strained muscles (the puncture wound in my left palm was still sore). A day of lessened physical activity was welcome. But we were not without tasks to accomplish.

The first, and most important, was a safety briefing from VIA Rail. We would not be allowed on the train without it. It was so important that we were held to a tighter schedule than any previous day. The rules were similar to those I’d received last October when travelling with the Rocky Mountain Rail Society when taking our locomotive out to Jasper. VIA’s rules are different than CN’s rules — mostly because we wouldn’t be working on the train itself, so some of the safety rules (such as hard hats, steel-toed boots, and safety vests) never came into play. (That said, I had a pair of steel-toed boots with me, just in case.) 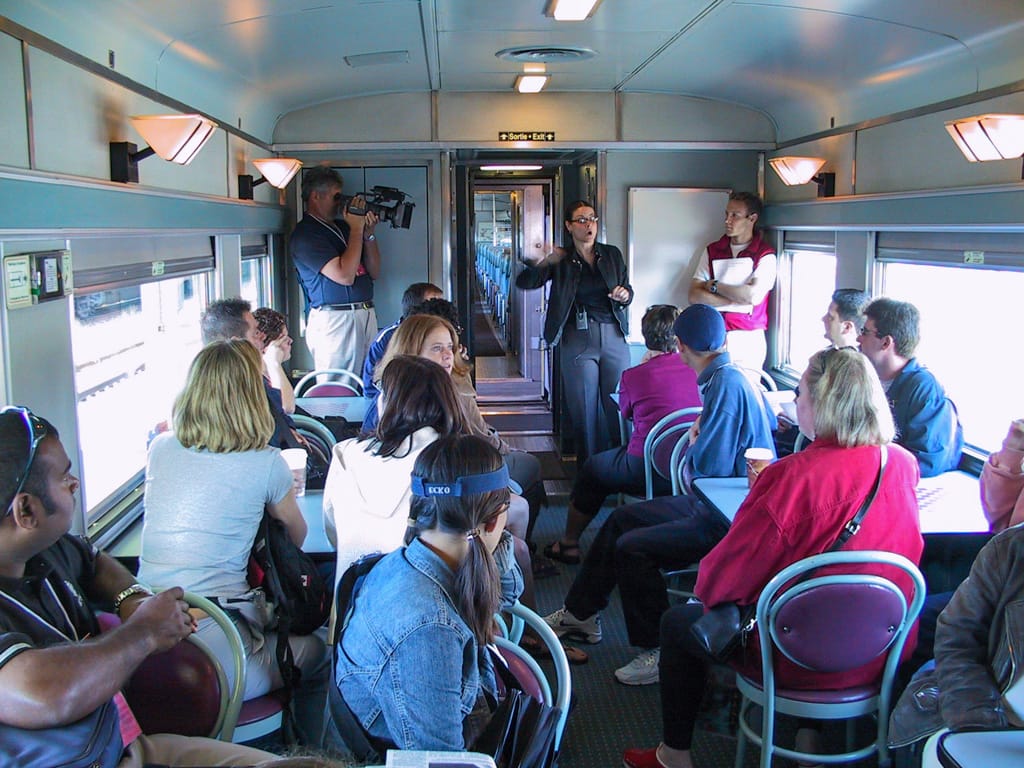 Fred and Marie-Claude, our VIA representatives, took us through the train and explained the details and the dangers the train, including specifics of each rail car. Among them: always wearing footwear. (Inside the cars weren’t such a danger, but going between cars could result in serious injury if you weren’t paying attention.) Water was rationed — we have a limited supply between stations. As such, showers are timed. We can’t flush toilets in stations, unless we’re told otherwise. (VIA’s Budd cars do not carry black water retention tanks — waste dumps directly onto the tracks.) And above all else: we had to be punctual. VIA’s trains run at the blessing of CN’s schedules; to vary the time of departure is to invite many delays.

The briefing shifted from the train to a classroom in the Maintenance Centre. (The whiteboard was covered with instructions on how to perform a proper fill weld.) The safety briefing mostly took place here, with Earl conducting most of the more serious stuff. Daryl floated around the room, his video camera catching almost everything.

We were to go to CBC’s Vancouver office at 10:30 for an employee celebration. The orientation ran long, however, and we ended skipping the party. No-one seemed to mind too much, preferring to take the afternoon off for relaxing and get in a little sight-seeing. It would be our last day before the trip fully began, and some had never been to Vancouver before.

For me, it was time to do laundry. I had been away from home already for a week, and I doubted I would be able to wash clothes before Edmonton. Luckily, the Holiday Inn had three washing machines, none of which were in use. All I had to do was obtain change (which I got from the front desk) and some laundry soap. Fabric softener, for the traveller, is a bit of a luxury item. That, and I was too lazy to buy any. A tiresomely trivial task, I did allow myself time during the dry cycle to get lunch at Kitto, a Japanese Restaurant on Granville Street.

Post-laundry was my Vancouver photo shoot. Having lived in Vancouver for two years, I was already familiar with the sights I wanted. So why bother taking pictures? For starters, I didn’t really have any decent pictures of Vancouver. It’s a common theme — you never take pictures of the city you live in. Part of my job is to take pictures for the trip, and because we’re in Vancouver, I need pictures of this city for the website. But also because I knew a lot of the people on the trip wouldn’t get to see very much, and I wanted them to see what Vancouver has to offer.

I moved quickly from the hotel down to Burrard Inlet to obtain a panorama of the harbour and mountains. I passed Amy and Chris coming the other direction. I guess they didn’t see me, as I said "hello" and got nothing in return. (Mind you, they claim the opposite. Who knows what happened!) I took pictures of the waterfront, then moved down to Waterfront Station (CPR’s second railway station in Vancouver) for a few more pictures. Then it was to nearby Gastown for a picture of the neighbourhood and the famous steam clock. I thought about a return visit to Granville Island, but I decided the pictures I shot there (see [[Visiting More in Vancouver]]) were good enough.

By the time I returned to the hotel, my feet were pounding. The activities of the last few days had turned my poor feet to greasy spoon-grade hamburger. They, and I, needed a rest. I thought about just sitting around until the feeling came back into my soles, but I made the mistake of laying down for a moment when dropping things off in my room.

I woke just before 17:30, which was when we were meeting at Panama Jack’s, a bar attached to the Holiday Inn. There, the Executive Producer of the 50th Anniversary Project, Pia Marquard held a cocktail party for we brave souls.

I hadn’t really met Pia before, having only heard her name a couple of times. I expected a stereotypical television producer. Instead, I found her a wonderful person to talk to — and she was actually interested in things I had to say! Not being a CBC employee, I’ve never dealt with a television producer before. All the stories I hear about producers generally make them evil in ways that chill even the hardiest of souls. I felt a lot better about the trip when I realized the person in charge really cared about what we did.

At least until she mentioned that she produced the first Survivor. We all laughed, nervously.

We toasted the work we had already done, commented on the work that was yet to come, and lauded Julie and Neil. They truly are our Fearless Leaders, pulling a very large rabbit out of a very small hat. I just hope that all of their hard work is seen by as many Canadians as we hope to see. It would be a tragedy if all these efforts go to waste.

CJ and I also had a detente, and reconciled. I was very happy to put our disagreement behind us and move forward. We have to rely on each other extensively to pull this little trick off, and having two people at odds with each other was only heading towards disaster.

Everyone talked, mingled, tried to get to know one another a little better, and snacked a little on the pub fare circulating the premises. But when you’re in a city like Vancouver, bar food really doesn’t quite cut it. I mean, when you’re in a world-class city, you want to eat world-class food. It sounds a little petty, perhaps, but it really does add to the experience. 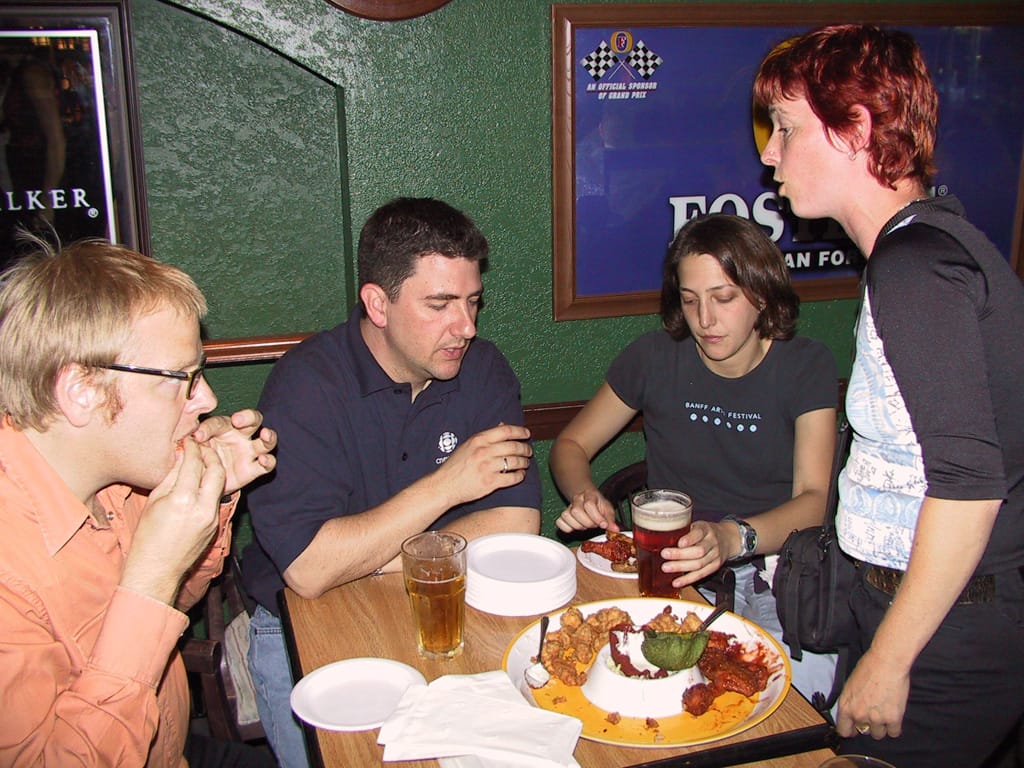 For the last couple of days, Emma and I had been discussing the need for good sushi. Although I’d had some for lunch, there is no comparison, no contest for good sushi. Luckily, Emma and I knew of a place: Hiro. Or at least that’s what we thought it was called. No entries in the phone book, nothing even hinted of by the hotel staff. How Emma eventually found it, I’m not sure. I can be certain that after all this grief, I’ll never forget the name "Shiro" again.

We would have been off with eight others, but suddenly our sushi crew disappeared on us. Emma and I had to settle for an evening gorging ourselves on what we think is the best sushi in the Lower Mainland, and possibly Canada. Fresh unfrozen tuna, fresh wild Pacific salmon, and rolls so luscious that I still salivate at the thought. Two bottles of sake only added to the experience. (And also got up the gumption to try deep-fried shrimp heads. Although surprisingly tasty, they are slightly unattractive.)

We pitied those who decided to go somewhere else. We took pictures for posterity. And for gloating. 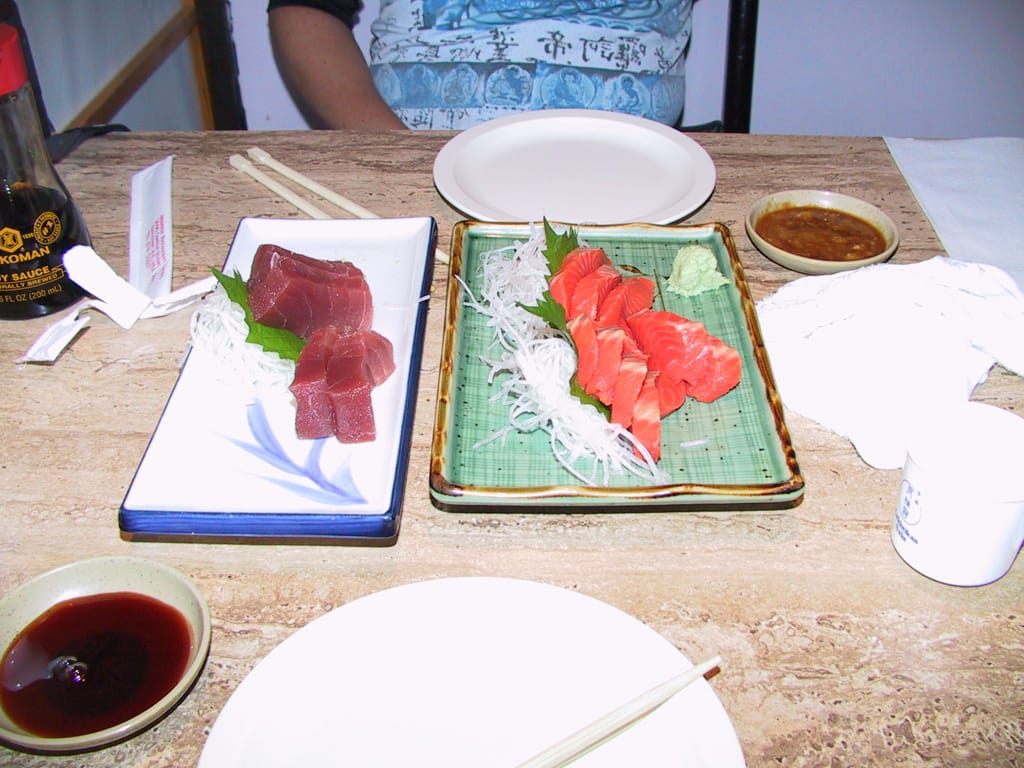 We wanted to stay much longer. Have more sake, eat more sushi, try other things on the menu. Responsibility tends to put a damper on things, and we ended up leaving after only a couple of hours. Tonight, we will sleep well. For tomorrow, the show begins.