I think it’s safe to say no-one left today’s event pain-free. This was the VIP Event day. This was when we had to be near perfect, as the executives from both CBC and VIA would be on hand, along with many other invited parties and members of the media. We had to shine. We had to be as close to perfect as we could be, considering none of us had put our displays together before.

One thing this day did bring was an introduction to Catherine (also known as CJ), my tent-mate. I’m responsible for New Media and Showvote. CJ covers the Archives material.

Somehow, I ended up being the tent chief. That just means I get to carry a walkie-talkie. It’s the first time I’ve ever carried a walkie-talkie. There’s an etiquette to using walkie-talkies, which includes using "roger" and "over" during transmissions, and waiting for others to finish conversations. It’s fun, but I was always a little nervous before broadcasting to the crew.

We started in the morning hauling out all the equipment, and then putting it all together. By 11:00, we’d had almost everything in place. This surprised even me, considering we had nine computers, and an awkward (and heavy) central triangular stand. Yet CJ, Brenda, and I managed to put it all together. We tweaked the configurations well into the afternoon, though, finishing just as the executives began their walkaround. 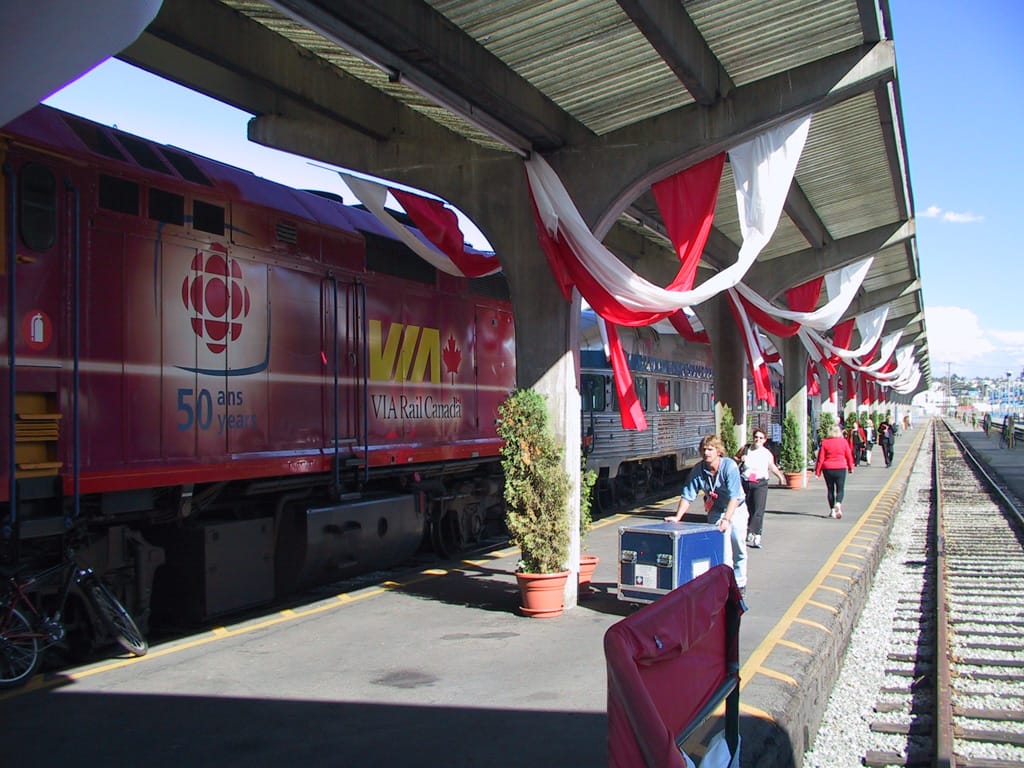 One of the purposes of the VIP event was to raise awareness of CBC Television’s 50th anniversary. The other was to provide the official kick-off, including a ribbon-cutting ceremony. I’ve never been to one that large. It’s a bit of a thrill, despite the pretentiousness. 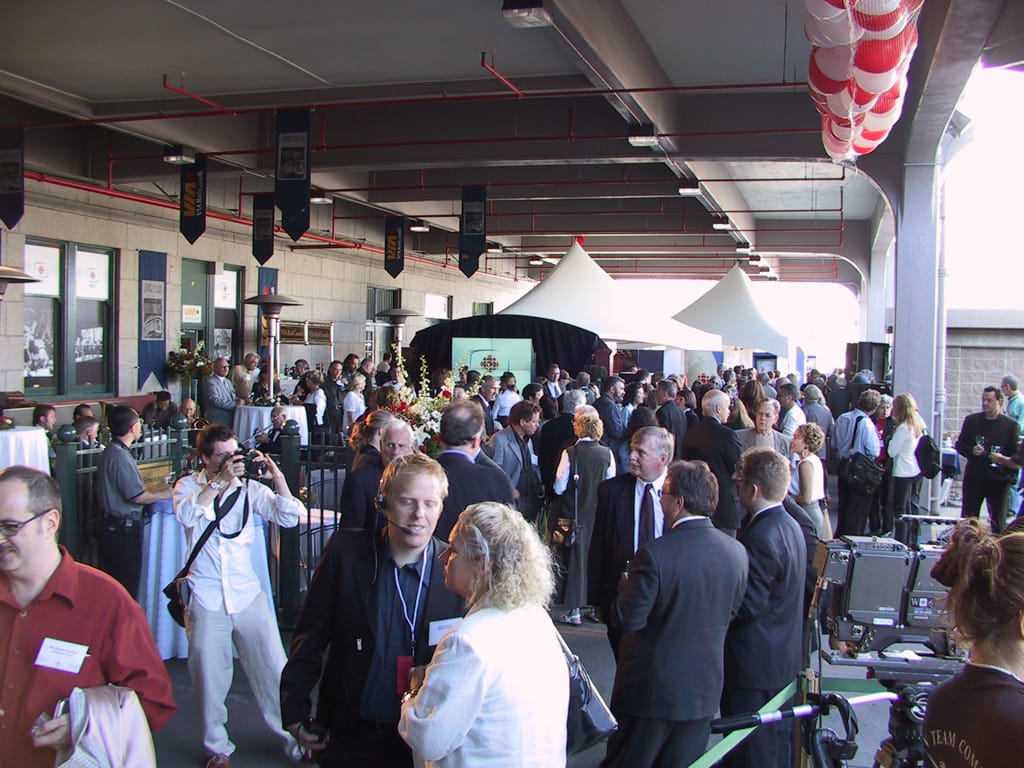 Volunteers started arriving about 30 minutes before the start of the event. These were local people, either from the CBC or from local schools. Our volunteers, Jaiman and Peter, were both students who received the call through email. They didn’t need to do much – just ensure that people were able to use the systems. Other volunteers needed to watch activities and help hand out giveaways.

Among the crowd were several celebrities, mostly with the CBC. Announcements came from Ian Hanomansing and Gloria Macarenko, both of whom feature prominently on CBC news. The big speeches came from Brian Williams (of CBC Olympic coverage fame) and Luba Goy from the Royal Canadian Air Farce.

Ms. Goy seems to have two settings: On and Really On. When motioned to stretch her speech due to time restrictions (we were going live with Canada Now, and had to synchronize our activities with their schedule), she dove off into tangents and accents that had many people crying. 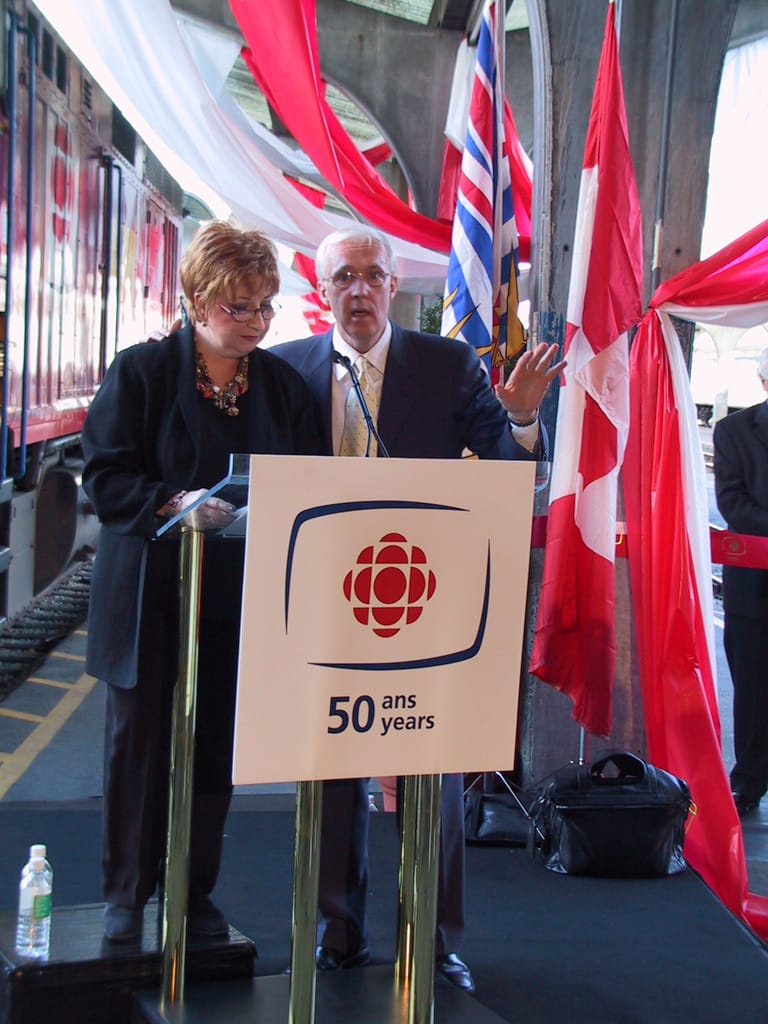 Finally, the moment came, and Carole Taylor, the Chair of the CBC, took centre stage. A very eloquent woman (but with some trouble annunciating French), she made a wonderful speech about how CBC has changed Canada and moulded Canadian culture. (If you don’t think so, answer this: can you hum the theme to Hockey Night In Canada? The Friendly Giant? Do you know what a Tickle Trunk is?)

Following Ms. Taylor was the Honourable Jean Pelletier, the chair of VIA Rail Canada. Mr. Pelletier’s speech echoed the thoughts of Ms. Taylor’s, but with a decidedly stronger slant to railroads.

At the end of this speech, Ms. Taylor and Mr. Pelletier took a place in front of the ribbon, while Luba and Brian finished off the ceremony. Then all eyes turned to the gold scissors as they cut the tape away, opening the train, and starting our journey.

The event soon faded away as people went through the train, and disappeared into the oncoming evening. We were to wrap up at 19:30, but a couple tents started at 19:00. This, sadly, caused me some friction that nearly ruined a good team.

I was using Neil as my touchstone for when things were to happen. According to Neil, we were to strike at 19:30. So I wanted to hold off. However, CJ was told to start striking. This caused miscommunication, and temperatures rose far higher than should have been allowed.

We persevered through the difficulties, and finished packing up. This is where we ran into our second snag. Having never fully repacked the baggage car, we didn’t brought everything back all at once. This has the effect of trying to empty a bathtub into a garden hose all at once.

Gerry (our Crew Chief) managed the repacking, but had to make a lot of decisions when faced with the flood of returned equipment set materials. It took nearly an hour and a half, but finally the last item disappeared into the baggage car. Total time: nearly three hours. Two times as long as we had hoped for. (In Winnipeg, we have only an hour and a half to do the same job.) Although disappointed, we were too tired and too sore to worry too much.