I awoke with my alarm ready for a day of discovery. That was important because I had only met three people in the crew of 30-odd. When I arrived in the restaurant for breakfast, I stared at a seemingly endless sea of unfamiliar faces. I ate breakfast alone, partly because I still have a weird shyness complex, and also because I needed to review my notes. (If anyone asks, I’m sticking with the latter reason.)

Walking into this entire affair, I’d had many questions and concerns. I had many reservations. I didn’t know whom I could rely on for help. Over the last two months, I came to know the management of this project. With that familiarity came comfort that things were under control. Today just reinforced that.

I boarded the shuttle to Pacific Central station, not knowing a person. I didn’t even know who my tent-mate was. I had talked to her on the phone, but you really don’t get an impression for them with a short conversation. We had work to do, and all I could do was just follow the crowd and fill in the blanks as I went along.

The first big help was courtesy of Ivan, the Museum curator. He had made name tags for everyone in the crew so we wouldn’t have so much trouble with names. (And also so guests would know who were are.) Besides, "Hi My Name Is" stickers look a little goofy.

We started off slowly — there was little we could do until VIA switched our train (or as much of it as was available) into the station so we could start unloading our stuff. Everyone milled. Some people knew others, but many (like myself) were total strangers. I figured out who Daryl was early on — he had the video camera. Ivan and I met in the opening stages, as well, learning that we were both part of historical rail societies. 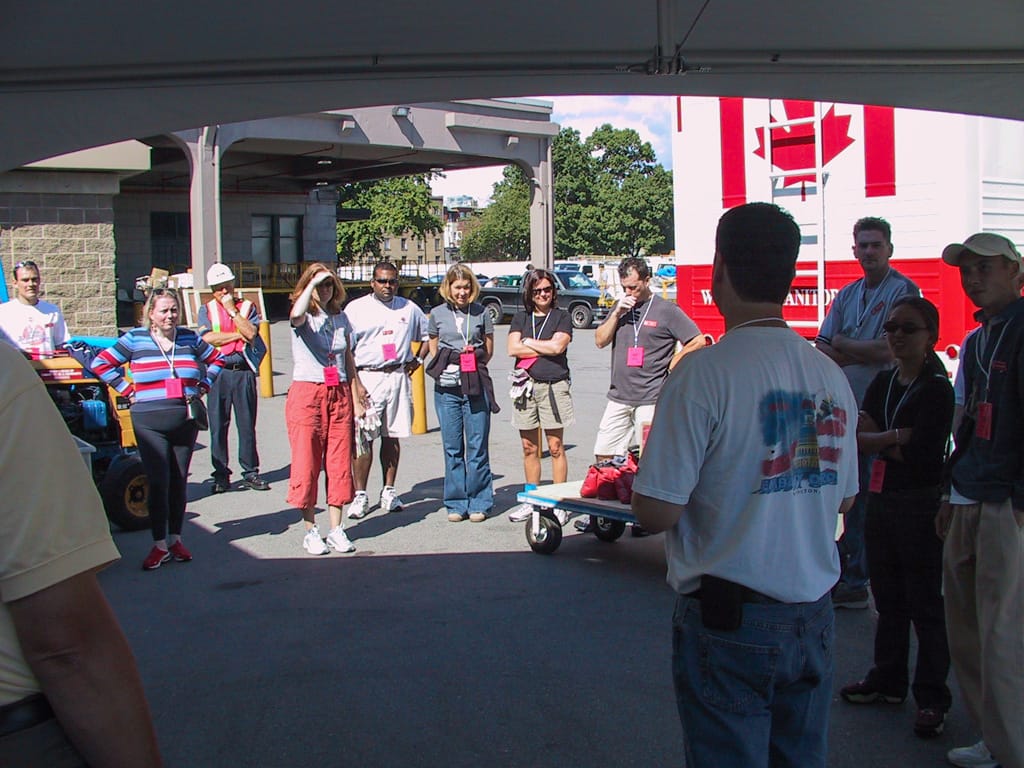 This was our first practical introduction to everything we have to work with over the next 37 days. Some of us had attended a meeting in Toronto a couple of weeks earlier that included basics with the tent. I saw a video. So actually getting a chance to fully set the equipment up was not only important, but helpful. 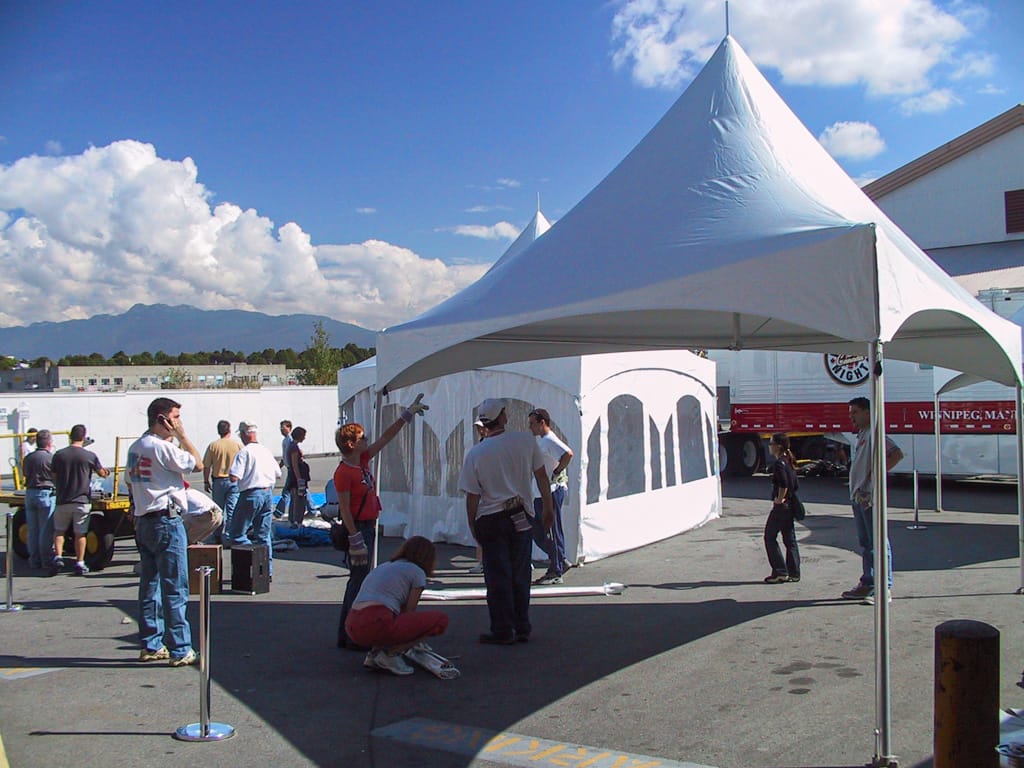 I had never been on VIA’s Budd cars before. (These are the stainless steel passenger cars most visible on The Canadian.) Formerly of the Canadian Pacific Railway, VIA inherited the cars when taking over passenger service in Canada. As we wandered through the cars, it suddenly became real. This was really happening.

For the last two months, I was living in a bit of a daze. When Brenda had approached me with this project, I felt like someone had a conduit into my dreams. Though I was active in planning and development, I still felt separated. Now I was in the thick of it. These were the people on the train. I would work and live with them for over a month. This was the train. There was no doubt any more, not even a hint of possibility. This was it.

Today was my introduction to the team. I hovered rather than directly introduced, allowing time for acceptance and for adjustment. The team is going to be everything for the next month, and I want to get off on a good start. Besides, I don’t want to bombard them with the Full Geoff. (Sometimes, I’m a little much.)

We set up tents in the morning. The original plan was to do full set ups and strikes (taking everything down) as many times as possible so we’d be comfortable with the system. But an unexpected arrival of the Rocky Mountaineer from Kamloops derailed us, and we had to stop.

During our break, Earl (the director of VIA’s Vancouver Maintenance Centre) took us into the maintenance building to see our lead locomotive. VIA #6403, a GMD F40PH-2 diesel electric locomotive, sat in its CBC 50th Anniversary decaled glory. It sat proud, looking like a cat that had just finished cleaning itself, ready for petting.

After lunch, we emptied the baggage car and made an attempt to see what we could make of the equipment. I was happy to see that all the computers and monitors had survived the trip. I was ecstatic to see that all the problems I’d seen in Toronto had been solved. Blake, one of the wunderkinds of the CBC interactive group, had worked magic that even Gandalf would not challenge.

We worked the whole day, at least when we weren’t halted by a train or by some other activity that needed our attention. Tests, checks, experiments, and finally decisions. When we were done, there was a feeling of accomplishment (though a few people thought we didn’t do enough), and of confidence.

Packing everything back up was a bigger challenge. Pulling things out of a baggage car is immeasurably easier than trying to get it back in again. Especially when it needs to be in a specific order. We finished around 21:30 that evening. We called it a night, retiring to the hotel for a rest. The day to come was going to be our real test. 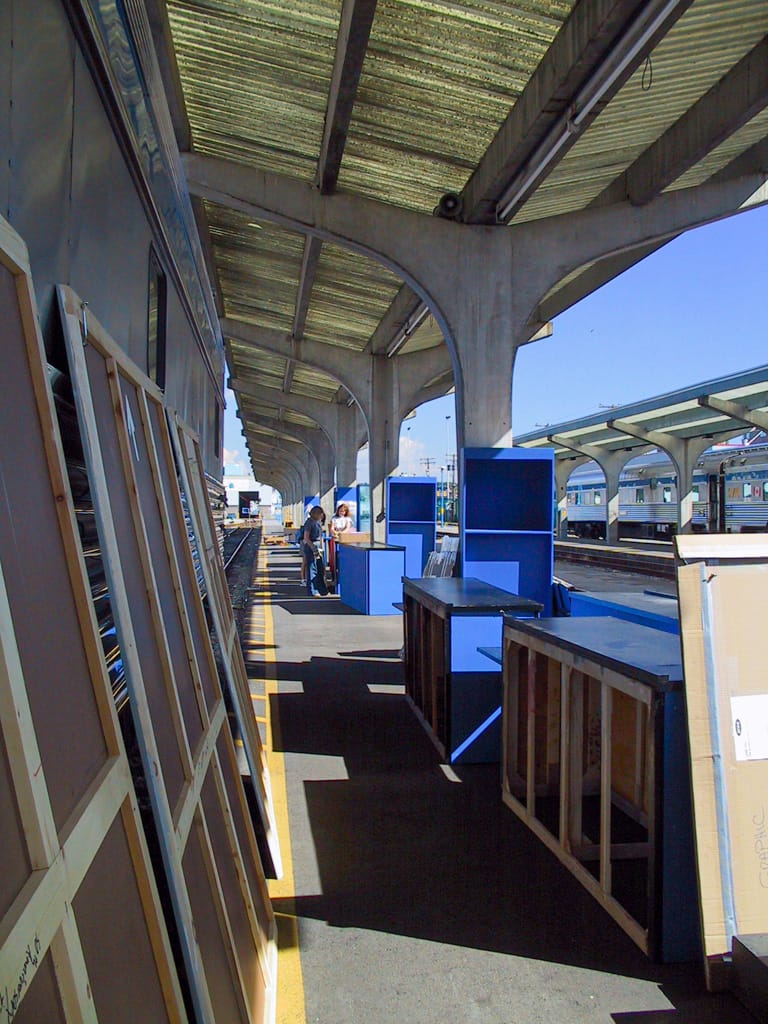 Brenda had arrived in the hotel by that time. She had come out to see how her labours were paying off. Brenda had lost countless days of sleep, and probably gained a few grey hairs working out the details for her department. Now it was time to see if it was all worth it.

Running into Neil in the hotel lobby, he invited me to join him, Brenda, and several others at the bar next door for a quick drink. Brenda and I ended up talking shop the entire time. I told her what I knew. She asked more questions. But in the end, the truth wouldn’t be known until the next day.