It’s been about nine months since I last saw 6060, when I left Jasper for Calgary. That’s about eight months too long, I figure.

Mind you, many haven’t seen 6060 since early November, since we’ve all been off living our lives while she sat in a shed for the winter. And as we had little money for maintenance work, little was done over the winter. In fact, almost nothing’s been done this spring or summer, either. It’s very handy when you pass all of your inspections.

That doesn’t mean there won’t be problems. Arriving just after 9:00, I found a large portion of the team staring at the air compressor. Apparently, on it’s first run of the year (the day before), the compressor had lost its lubricant. Something wasn’t working.

What exactly was broken, I’m not sure. But it took seven people to get it back together again. (There’s a joke about trainmen and a lightbulb in there somewhere.) The air compressor is a vastly complicated piece of machinery — something I fear I’ll one day have to pull apart to repair. But I got my first taste, so hopefully next time it won’t be so bad.

Just so long as my memory of what we did doesn’t get displaced by some other seemingly random piece of useless trivia.

But just after noon, we declared 6060 fully operational (without the air compressor, we would have gone nowhere), and were ready to do the run to Big Valley. 6060 will do only seven runs this year. It’s a small number, but it’s far better than just sitting around. Luckily, this was one run I got to follow.

The Stettler to Big Valley run is quite short — only about 30 kilometres. Mind you, it takes over an hour to run it, because 6060 can’t run quickly on the line with passengers. That makes it very easy to pass for taking pictures. Which is precisely what Graham and I did that Saturday afternoon.

Interestingly enough, I first met Graham chasing 2816. It didn’t take long for us to become friends, having a mutual love for trains (although I lean more to steam; Graham’s partial to anything on rails). It also didn’t take long to convince Graham to join the Rocky Mountain Rail Society.

This was Graham’s first meeting with the RMRS, although he nearly missed 6060’s 14:30 departure from Stettler. We hooked up about a half-kilometre down the line from the station. And we started taking pictures.

Graham had never been to Stettler before, and had never been down any of the side roads in the Stettler / Big Valley area. They’re a little hairy. Especially when you’re trying to outrun a train. (Even if it slow-moving.)

Our first pictures were at a station-like landing just down from the station itself. Then we raced to the crossing just as you exited Stettler heading south on Hwy. 56. After that, we headed down to the road crossing at Warden. Followed by Warden South. And then at multiple crossings and hills overlooking the rails all the way down. 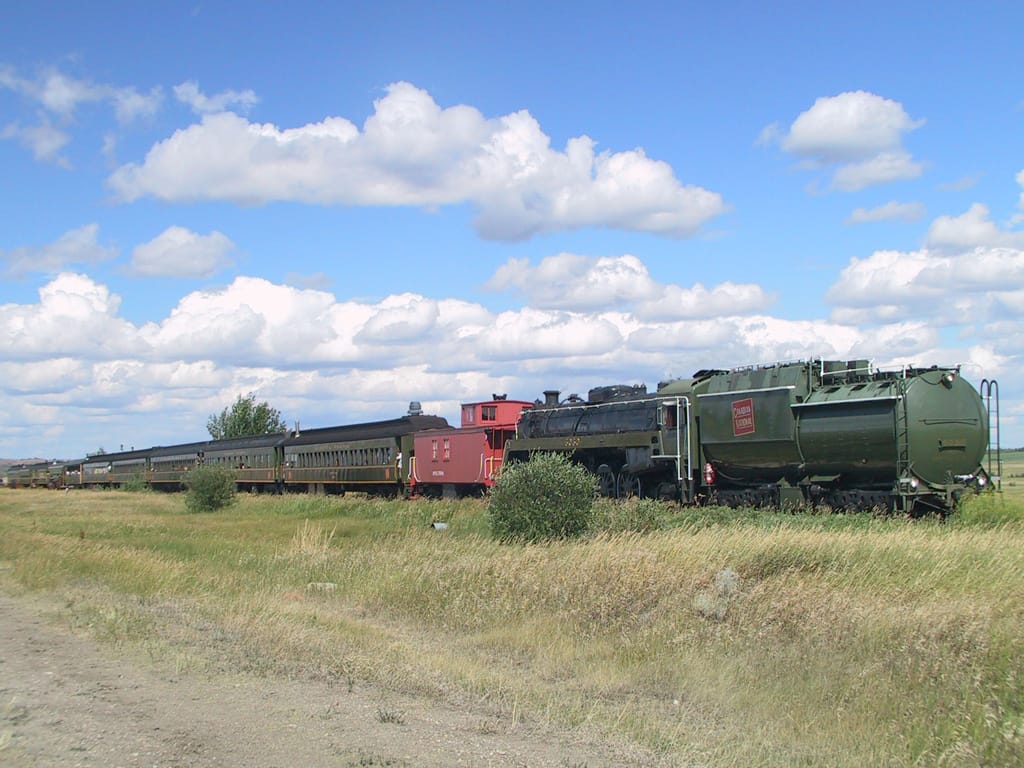 The road we were on didn’t follow the tracks perfect, so we’d regularly lose sight of the rails. This was a problem because sometimes, the tracks would suddenly reappear, and you had to quickly judge whether it was worth stopping, or continuing down. And the suddenness was the problem — if you slammed on your brakes on the loose gravel road, you’d fishtail quite easily.

I did a few times. (Although I had a rally car-like turn at one corner, trying to avoid a dog I saw, and turning onto a road about 10 seconds ahead of 6060. After I realized I wasn’t going to die, I was quite pleased with myself.)

Taking pictures where we could, we weaved our way down to Big Valley, arriving in time to catch the train being held up by bandits (part of the show), and meeting the train in Big Valley itself. It was a little harried, but I introduced Graham to Don, Harry, Terry, and anyone else from the RMRS I could find.

But then it was off for us, back to Calgary. (Separate ways, that is.) As much as I wanted to follow 6060 back to Stettler, I knew I wouldn’t last long enough. I was pretty tired and wanted to go home and rest. I’ll do the full run next time.

Though not quite as fast, I think.