All new homeowners have one responsibility to fulfill. It’s not taxes. It’s not a mortgage. It’s not even making sure the garbage goes out every day.

It’s a housewarming party. (And taking double-duty as my 30th birthday party.)

My family has a fairly simple tradition when it comes to parties: Do it right, or don’t do it at all. Chris and I had a corollary to that: Go big, or go home. Add ’em together, and you have a recipe for a good time.

Preparation began a couple days earlier, when Tamara and I made a run to the Costco in the northeast to stock up on foodstuffs and all the related materials for a barbecue. This included most of the ingredients listed above. This was followed up by two trips to the Kensington Wine Market for the "happy" drinks.

Needless to say, the kitchen was a little awkward to walk around for a while.

Luckily, we didn’t need to do a mass cleaning prior to Saturday — that had been done for when the family showed up last Thursday (see [[Family Comes out for my Birthday]]). But a little work was needed — a quick washing of the kitchen and bathroom, and the requisite yardwork.

The yard isn’t looking great, and I’ll be the first to say it. We’ve had voluntary (read: mandatory) water restrictions in Calgary all month due to high sediment in the water treatment system. That’s fine with me — now I just won’t cut my grass. But it’s looking a little yellow. It’s not dry, though, so you can walk across it without trouble. But I had to clean up the yard a bit, and make it look at least presentable.

After this was a run to refill the propane tank on the barbecue (the Beer Can chicken had used a fair bit of fuel) and get a lot of ice — 12 bags, to be specific. Luckily, I still had Mike and Brenda’s cooler, which make transporting (and preserving) ice very simple.

By 1:45, two large yellow tubs were filled with pop and beer, the food ready (and carmelized onions nice and warm), and all we had to do was wait. And wait we did.

First rule of all parties: They never start when they’re supposed to, and they never end when you want them to. So long as you can accept and understand this, you’ll always be relaxed. It’s taken me a few times to get this through my head, but now it’s an accepted fact.

Slowly, people started arriving around 2:30. The first to arrive were Jin and Fritz. Fritz almost immediately started calling around to a dentist — the crown on one of his teeth had come off, and the pain was a little on the excrutiating side. (I should point out that Fritz is a total trooper. While most people might have dropped in briefly and left, Fritz went to the store, got some Fixodent, and then stuck around until nearly the end of the night.)

The skies started to turn ugly. You can plan for virtually anything. During the summer in Calgary, you can also plan for the weather — it’s usually consistently sunny and warm. But if there’s one thing that’s very true here, it’s "if you don’t like the weather, wait five minutes". We had a few drops of rain, which had a few people really worried that nothing would happen. But I held the faith ... and I was rewarded. Sun crept out, and suddenly it was sunny again.

By 4:00, the party was in full swing, people appearing out of the woodwork, everyone having (from what I can tell) a lot of fun. Around 4:30, I fired up the barbecue and started cooking for the hungry masses. Although I had a few people offer to take the cooking reigns so I could mingle, I was more than happy to cook — then everyone had to come to me. (There’s always meaning within my madness, even if it doesn’t look like it.)

Even Robyn, my realtor came. She brought her husband, a friend of theirs, and their dog Chewie. (Yes, as in "Chewbacca".) Chewie is a tiny little dog ... about the size of a large rat, but significantly cuter, I have to say. Everyone loved Chewie, especially with how he chased Miao-Yin’s catnip monkey (which Miao-Yin doesn’t even bat an eye at anymore) and the pinecones. Chewie loves pinecones.

People came and went as they pleased, which is exactly what I wanted: People to enjoy themselves. As the sun set behind the house (it was still very bright, I should add), I opened the presents that people had brought (many opted not to follow the "Bring Nothing" rule I had tried to impose). My friends are very generous and know me well. Therese and Stuart gave me a very nice reproduction of a Canadian Pacific poster, complete with a train. Jon and Pearl gave me a book on trains. (Like I said, my friends know me well.) A group of my friends (collectively known as the Asian Brother Crew) gave me The Godfather movie trilogy, which I was very happy about — I haven’t seen any of ’em. (And admittedly, I’m curious to see if Godfather III is as bad as fans seem to make it out to be.) 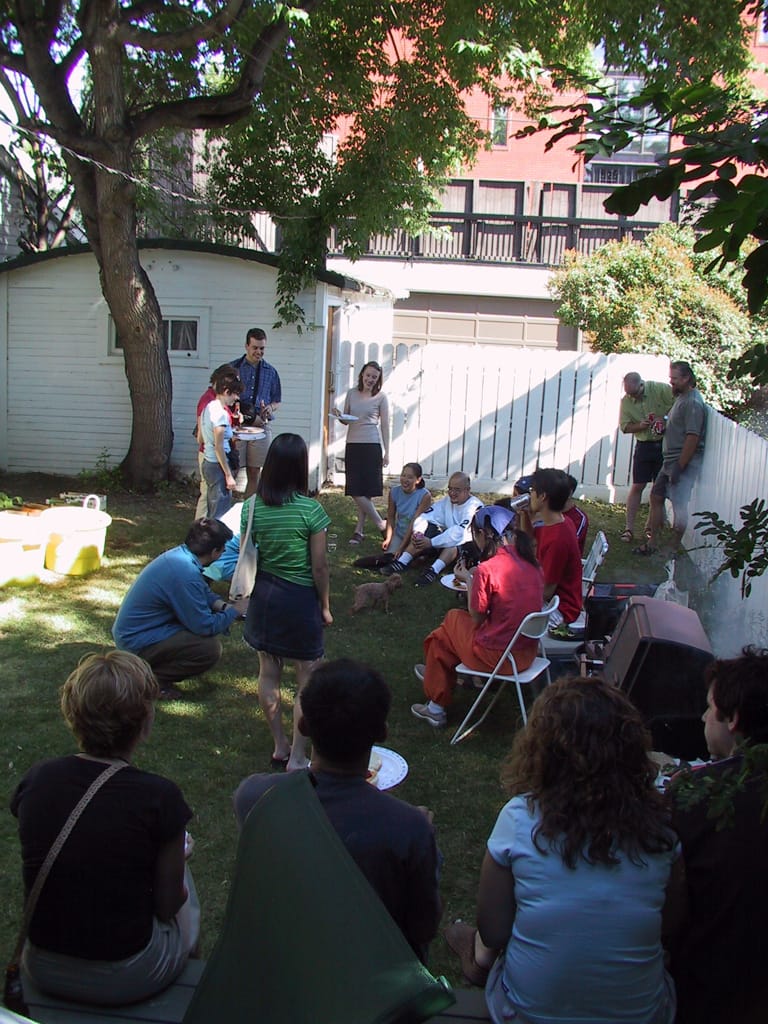 Before too long, the party whittled down to the hard core group, and pretty much all of us retreated indoors. Dispersed all around the main floor (suddenly I was very glad about not having a dining room table yet — that’s where Tamara’s couch is) were groups of people in discussion. Even Don from the Rocky Mountain Rail Society showed up for a while. I had been concerned that he would have no-one to talk to but myself, but it turned out that Virgil had bought his motorcycle from the same shop Don frequents. They hit it off almost instantly.

I found a few people mingling around out front — mostly smokers. They were engaged in silly repartee, which of course meant I had join in for a while. This was fortunate because I managed to witness The Great Escape.

Miao-Yin is a lovely cat. But she’s a bit of trouble. She eats Spaz’s food when I’m not looking (Cathy started calling Miao-Yin "Miss Piggy"), and she’s always trying to run outside. Miao-Yin used to be a stray before Chris picked her up from the Humane Society, and there’s a part of her that wants to run free. So when she found the open front window sans screen, she made a run for it. And the second she saw me, she turned, and bolted through a hedge.

My heart sank faster than a meteor. The only thing that ran through my head was "Chris is gonna kill me". I immediately hopped the fence and raced into the adjoining yard to hunt her down. Around the side of the house, into a darkened backyard, and she vanished. Panick began to set in. Although Miao-Yin’s microchipped, I was terrified that she might get hit by a car, attacked by another animal, or get taken in by someone else who didn’t want to give her up. Suddenly, I realized I was in bare feet running around in the dark. (The alcohol was rapidly thinning out in the adrenaline.) I quickly went home for my sandals and a flashlight.

We initiated a neighbourhood-wide kitty hunt. Unfortunately, Miao-Yin doesn’t come to her name, so having 6-7 guys wandering around calling her name is somewhat ineffective. Figuring that she hadn’t gone too far (I hadn’t seen any cats wandering around), I grabbed the flashlight and shone it into the neighbour’s yard. Sure enough, there she was, hiding in shrubs on the far side. (I’m very thankful that she had white fur.)

Racing around, she had time to move. Thinking I was gonna be chasing her all over the neighbourhood again, I got lucky and found her down the side of a house. I called for Miao-Yin’s food and laid some on the ground. She slowly came out sniff, allowed me to pet her, which was when I pinned her to the ground like a Mexican wrestler. Almost immediately, she knew she was going home again. She struggled, but I had a very firm grip, and she wasn’t going anywhere.

Suffice to say, the little hairball ain’t going outside again.

Spaz just sat in her window and snickered, in whatever way a cat can snicker.

The party dwindled, people taking their leave and heading home. Soon, it was just Carl, Adrian, and I, sitting on the deck, talking about what came to mind. But even time caught up with Adrian, and he, too, went home. Carl and I sat up a while longer, chatting, although we had to retreat inside because it (finally) got cool enough that it’s uncomfortable to be outside without a sweater.

The party finally ended at 1:15am Sunday morning. The house hadn’t been trashed, not a single thing broken. Had it not been for the furry Houdini act, the evening would have been quite tame and comfortable. (Mind you, she got revenge by trashing the kitchen during the night. Took me about three hours to clean up the mess.)

Unfortunately, despite the seeming success of the event, it couldn’t really be called a party.

The cops never showed up.