Then there’s a Critical Mass party.

Five years ago yesterday (4 July 1997), Critical Mass launched its first ever website, MBUSA.com. That first launch wasn’t perfect, but it started a business relationship that has lasted ever since. MB is still our largest client, and the project I’ve been on for most of my time here.

What’s that have to do with a party? Well, quite some time ago (a few months, to be exact), it was decided that we needed to celebrate the launch of our first website. And, this is the cool part, it was going to be a complete and utter surprise to everyone in the company.

Except those who knew about it, anyway.

I was one of those lucky few. I was asked to join the "Secret Committee" (or something equally quasi-mysterious). This group would help make the decisions that would affect everyone on that fateful day. This included things like activities, awards presentations, gifts, and so forth. It would also later expand to duties such as bus captain, and in my case, emcee.

Having only returned from Ontario the day before, I would basically walk into an unsuspecting office for a whirlwind day of what I could only assume would be just short of a drunken mess. But I started off a little more sensibly: Charged camera batteries, a hat, sunscreen, and clothes that I knew I could wear all day without getting uncomfortable. I suggested to Tamara (my roommate) that she dress accordingly. I didn’t tell her why.

I arrived at the office and proceeded to catch up on email that had been backing up for a couple of days. And when no-one was looking, I reviewed the script I was to read from. Before long, it was breakfast time. As per usual, I eat breakfast at the office (I pay $20 a month for the privilege). Normally, I’m there for about 15 minutes, and then I’m back at my desk. But this morning, we had to wait for an impromptu Town Hall meeting in the Bistro at 8:30.

Di (our president) started a little after 8:30, and made a few quick announcements. The first was that we would not be coming in until noon the following day. This was expected — it was Stampede Parade Day. No company is open until noon on parade day. But there was another announcement.

"Clear your calendars. You’re all going out at 10:30, and you’re not coming back until after 5pm."

There were mostly whoops from those in attendance. The rest were on the Mercedes Dealers team, who were behind in their work, and saw a day of productivity just vanish before their eyes. But the needs of the many must outweight the needs of the few ... so happy we were.

Productivity, suffice to say, disappeared while we awaited our 10:30 departure. This allowed me to get some more details out of the way. But before long, the PA sounded our call downstairs to board the busses. It was time to party.

On the bus, no-one really knew what was going on — that, of course, was the point. We received our gifts (a pair of sunglasses, a buff, and a wristband that did something, though I’m not sure what), and the busses headed out to our first venue...

The Southern Alberta Pioneer Memorial Lodge. Sounds impressive, but it’s little more than a restored hunting lodge and about an acre or so of ground. But it’s on a cliff overlooking the Elbow River, so it’s not too bad. Already set up were tables and chairs, the Bistro staff was already cooking lunch, and most importantly, the beer was already cold.

Jay and I were to share emcee duties that day, but Jay (despite a flair for the dramatic) had a nasty case of stage fright. He gracefully ducked out and let me handle the various announcements. But this didn’t stop Jay and I from very quickly downing a couple of beers to try and take the nervousness off. (Jay moved a little faster than me, though.)

After about 30 minutes, it was time to show my cards and let everyone know that I knew what was going on, and show to the company that people like me should never be let near a microphone.

Suddenly, I developed a radio voice and became no better than the morning radio rock jockeys who get worked up at the slightest sound of anything. I had no idea where that all came from. It was a little creepy to say the least. But hey, strange things happen right out of the blue. (‘Course, I wasn’t drinking that crap, I was into something much nicer.)

The irony of all this was that in school, I hated giving presentations. I hated getting up in front of people. Public speaking was very, very bad. Yet here I was, completely comfortable in making an ass of myself, and actually surprised that people listened. It was ... surreal.

Lunch started and for a while people followed the rules of order. But soon, no-one cared, and everyone wanted to eat. Not a big deal — there was lots of opportunity, and lots of food. (I think we had leftovers.) I didn’t eat much, though — only enough to try offset all the beer I was putting back.

After lunch came the Dinosaur Awards. These were presented by Di (the President) and Dan (the Senior Vice President of Client Services) to the original employees of Critical Mass, still with the company. The trophies were little clay statues of cartoon dinosaurs, each customized to the recipient (for example, our CTO — a former programmer — received one where the dinosaur was smashing computers).

Following the awards ceremony, we started into the games. We had planned on holding a games to give people some time to enjoy watching each other act goofy. There are few people in our company who won’t give into the urge to act like an idiot from time to time.

The first game was the Naughty Noodle Toss. Sounds worse than it is, but it’s still entertaining to watch. Basically, everyone stands in a circle. To some of these people are given two metre long "noodles", which most people will recognize as swimming pool toys. These are slung between the legs. Noodles must then be passed to the person next to them without the use of their hands. A dropped noodle must be picked up without the use of the hands. 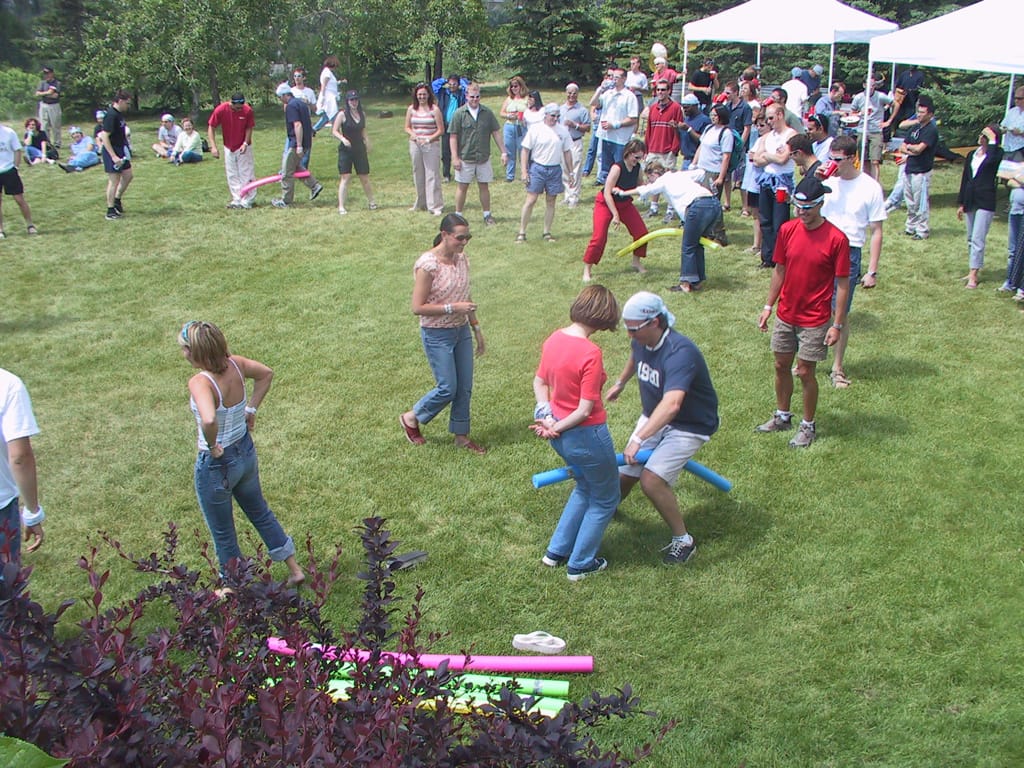 And when everyone’s drunk (or at least slightly inebriated), it gets everyone laughing.

We went through four games of this — three with two teams each (we had six teams in total), and one last game of the winning team of each of the previous three. It was quite a sight.

The second game we played was the Single Shoe Scuttle. This one was even more nasty, though far less embarrassing. Everyone took off a shoe (or sandal, if that’s all they had), and placed it in a line. The team would then line up, and prepare to scramble around a small field with scattered dominoes. Two teams played at once, the winner was the team with the most dominoes. Although we did manage to play three games, we never got the grand championship, as we had to pack up and leave for the second venue.

Normally, no-one would have known where we were going, but unfortunately, Ted (our founder and chairmain) accidentally let it slip that we would spend the rest of the day at The Whiskey (a bar a few blocks from the office). At this point, my last official announcing duties took place, and then we were off.

We pretty much dominated the place. Everywhere you looked were CM employees with their buffs (worn a number of ways) and sunglasses. Getting even more drunk than at the Pioneer Lodge. But this was all part of the fun. 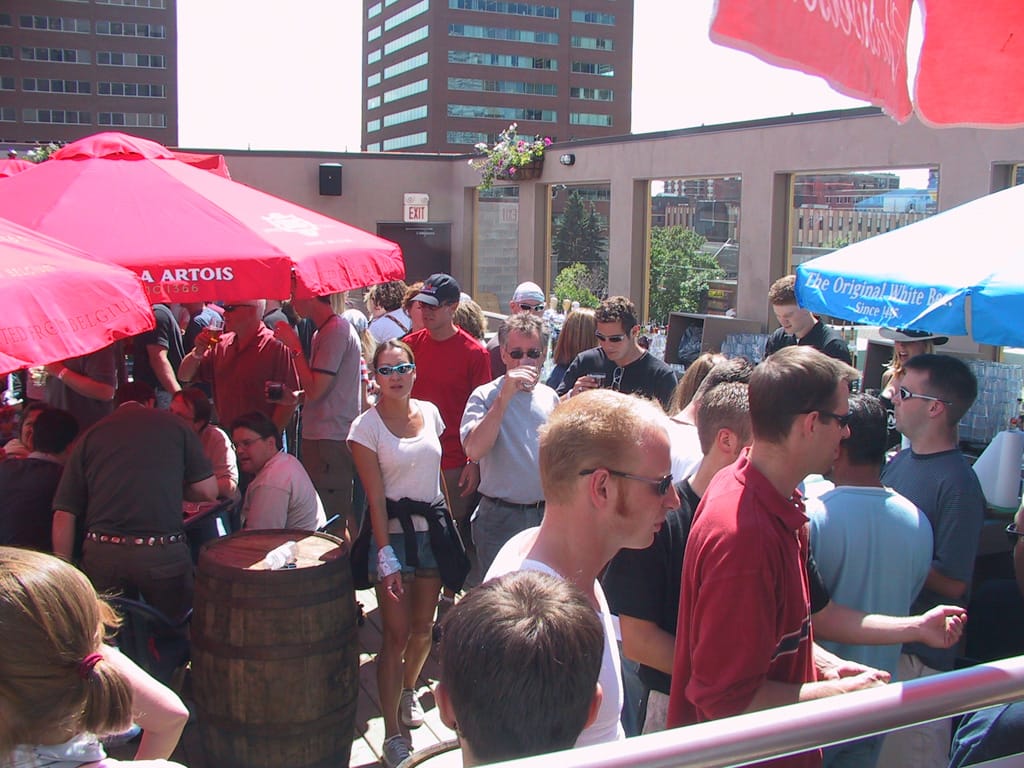 Slowly, the sun started to set, and people drifted off. A few diehards stuck around until quite late, but I left earlier — around 9:30. Deciding I’d had too much fun (and beer) for one day, I opted for the trip home.

To drink my body weight in water.