I remember when I used to have time to kick back, relax, and spend an afternoon watching TV.

I think I was five.

This weekend past was yet another in a string of busy, hectic times. As June rolls towards a close, many things are coming up that need to be tackled. Two things of particular importance: Turning my apartment back over to the building, and getting ready for Therese and Stuart’s wedding.

The former meant I had to spend a large portion of Saturday in my apartment trying to clean the last of it up. Now, if I was smart, I would have started out first thing in the morning. However, me being the idiot I am, decided that I also needed to make a run to the local Humungous Hardware Store to find something things I needed around the house (pliers, a Dremel, garden hose and nozzle, propane tank, branch cutters (I have some very overgrown bushes), and so on and so forth).

Having wasted a couple of hours doing that, I quickly stopped off at home before heading over to the apartment to clean. First was a run through the bathroom, trying to get a weird stain out of the bathtub (now mostly gone, thanks to CLR) and make everything sparkle. Then it was off to the kitchen to mop floors, etc. so I could move the last of the boxes off the carpets. It was time for the Rug Doctor.

Now, the apartment management doesn’t seem to like Rug Doctors. I have no idea why. But frankly, I don’t give a damn what they think — I needed one for the house anyway, and figured taking a couple of hours to run it through the apartment first couldn’t hurt.

Chris, you’ll be glad to know all those stains we accumulated (thanks to a certain cat) are now gone.

The carpets are now cleaner than when I first moved in. But the managers will probably still complain that I didn’t get a professional in there and demand that I do. I swear, some people are just plain silly with requirements sometimes.

But it wasn’t money wasted — I wanted a Rug Doctor for the house, too. I never got a chance to clean the carpets before moving in, and I knew full well that the previous owner didn’t clean ’em on her way out. Upon arrival at the house, I quickly realized that the stairs would be nigh on impossible for me to clean with just the machine — it was too big for the small spaces. I needed an attachment.

Calgary has a lot of Safeways. I’m not sure why, but there are times when that comes in really handy. For example, I rented the actual Rug Doctor from the Safeway that was nearest to my apartment. My house, however, is only two and a half blocks from a different Safeway. So, wandering over to my "new" grocery store, I negotiated a rental for the upholstery attachment. The clerks were a little confused at first when I told them what I did, but the senior clerk on staff promptly smiled, handed me the bag of hose and cleaning nozzle, and asked that I merely return it before the store closed. No charge.

I love this city.

I swear that the previous owner never cleaned anything. She might as well have been a renter for all she did. The yard’s a mess, the kitchen’s not in the best of shape, the dishwasher is probably beyond repair now, the washer/dryer is so poorly installed that it goes off-balance constantly, the house needs repainting, every bush and tree is overgrown, the garage is literally falling apart, the shingles need replacing, and the carpets were completely, utterly, and totally filthy.

They didn’t look filthy, at first glance, but after running the Doctor over them, I felt a little ill.

Chris and I vaccummed fairly regularly in our apartment (okay, sometimes not, but we tried to be regular). But we had friends over all the time, tracking in dirt (particularly in the winter) from everywhere (we did the same, of course). You’d think with such high traffic, that our carpets would be dirty. They were. But the water I emptied in the apartment didn’t even come close to the sheer sludge I was emptying from the carpets in the house.

I finished the day off with a steak dinner (my reward for being utterly exhausted) ... the first made in my new barbecue, a housewarming present I got from my realtor. (Did I mention that she is absolutely awesome?) Although I did have to figure out why it wasn’t working properly, so my dinner was delayed until almost 23:30.

The next day, I tried to start off early, so I could get those rogue boxes out of my apartment and over to the house. So much for plans.

I arrived at Stuart and Therese’s house a little later than planned, but not terribly late. Sunday was not only Father’s Day but also their wedding shower. A bittersweet day for me, if there ever was one. Although, I do have to say that some of Dad’s humour managed to find me. When asked by someone who doesn’t really know me: "Have you called your father today?", I replied (with a big, dopey grin): "Can’t — I’d need to do a seance." Next year, though, I’ll use someone else’s idea: "Not yet — can you gimme a hand with this ouija board?"

We drove down to Lakeview Golf Course (a city course) to participate in Stuart’s end of the shower. (Therese was holding a pottery session. The problem for me was that I was torn between them both. Luckily, I didn’t have to choose — I was assigned Stuart by someone else.) Right by the biggest water trap in the city (the Glenmore Reservoir), it was a little out of the way (Stuart and I had some trouble initially finding the place), but an otherwise great place to be.

We broke into one group of four, and two groups of three. (The groups of three had extra people thrown in to round out the foursome.) I played in the last group with Stuart and Heather, the roommate of (a different) Geoff, one of Therese’s friends from her psychology classes. (Geoff and Stuart are good friends, too, of course.) Most of the others in the crowd were former (or current) friends from Stuart’s office(s).

I vaguely remembered my last outing in golf, on the Canadian Forces Base Comox golf course when Gerry and I were visiting his uncle in September 1997. I remembered how badly I sucked. I definitely haven’t improved since then.

Although I had a few good hits, they rarely went in the direction I wanted them to. And I was definitely not good on the greens. I’m used to BC greens, which are wet and really slow. Calgary greens are faster than a chuckwagon race. It took me nine holes just to get the hang of ’em. 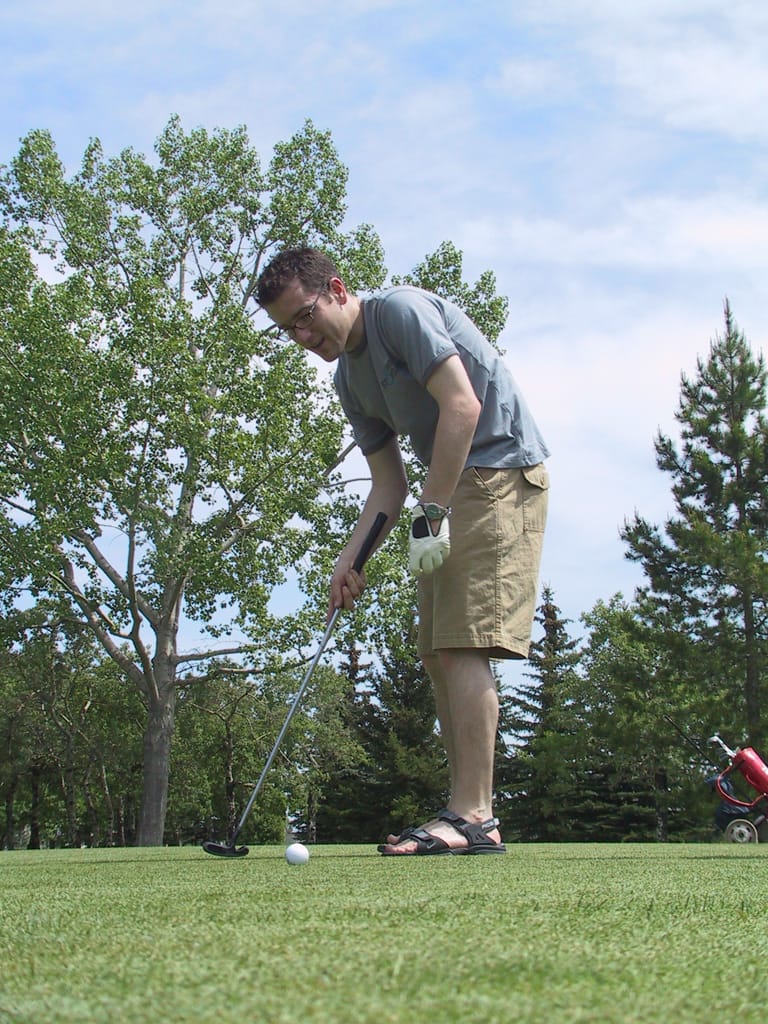 But I shot a 61 overall, nonetheless. Before you get too impressed with the score, though, please understand that it was only a nine-hole course.

I shot 27 on the first three holes alone.

The tournament over (myself winning with the largest score, though the other Geoff wasn’t far behind), we adjourned to Jack Astor’s out in Westhills for the 19th hole. 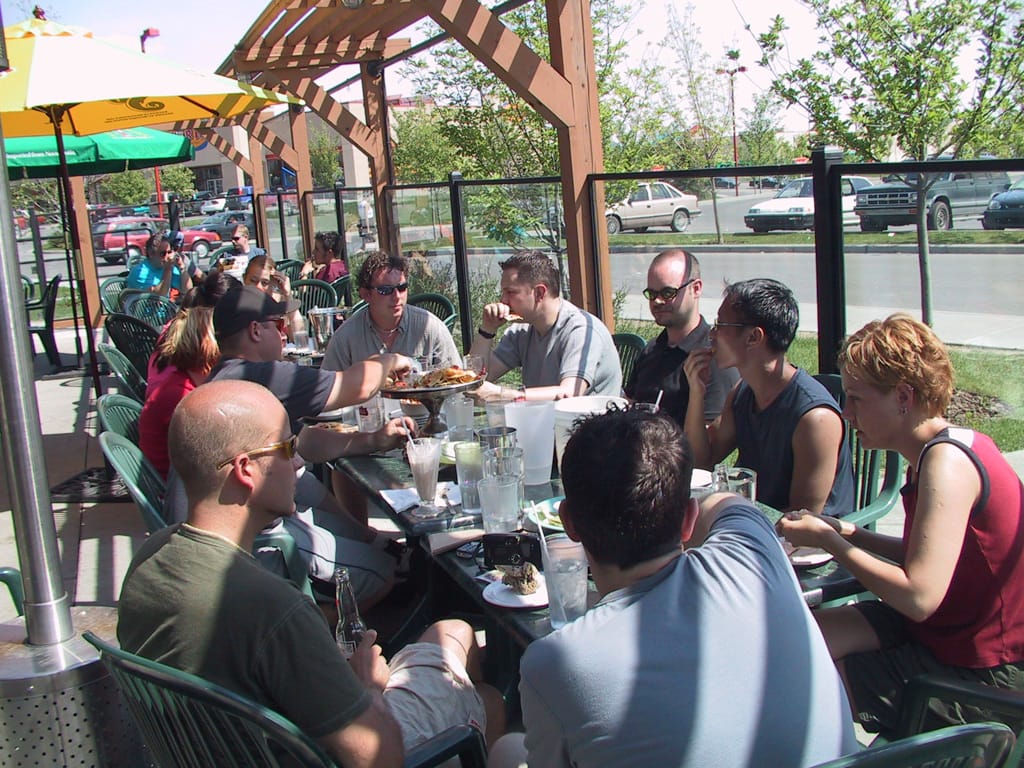 We broke up a little before 16:00, Stuart and I having to make a run to Mission to pick up Leah (one of Therese’s classmates), run by Therese and Stuart’s house (to get a video camera and so Stuart could change), and then way up into Tuscany (in the distant northwest corner of Calgary) for the shower.

By now, I know most of people who were there (I’ve been invited to enough soirees that include Therese’s classmates that I’m reasonably familiar to them), so I didn’t feel too out of place. Besides, they’re all really nice people, so it doesn’t take much to get to know them.

After a quick meal, we sat down to watch the present opening. I sat on the stairs and took pictures (which wasn’t easy, with the lighting and angles I had to work with). As I sat there, I had glimpses of the past, going back to high school and early university, when Therese and Stuart were dating. I felt vaguely uncomfortable again, like I was an unwanted outsider. 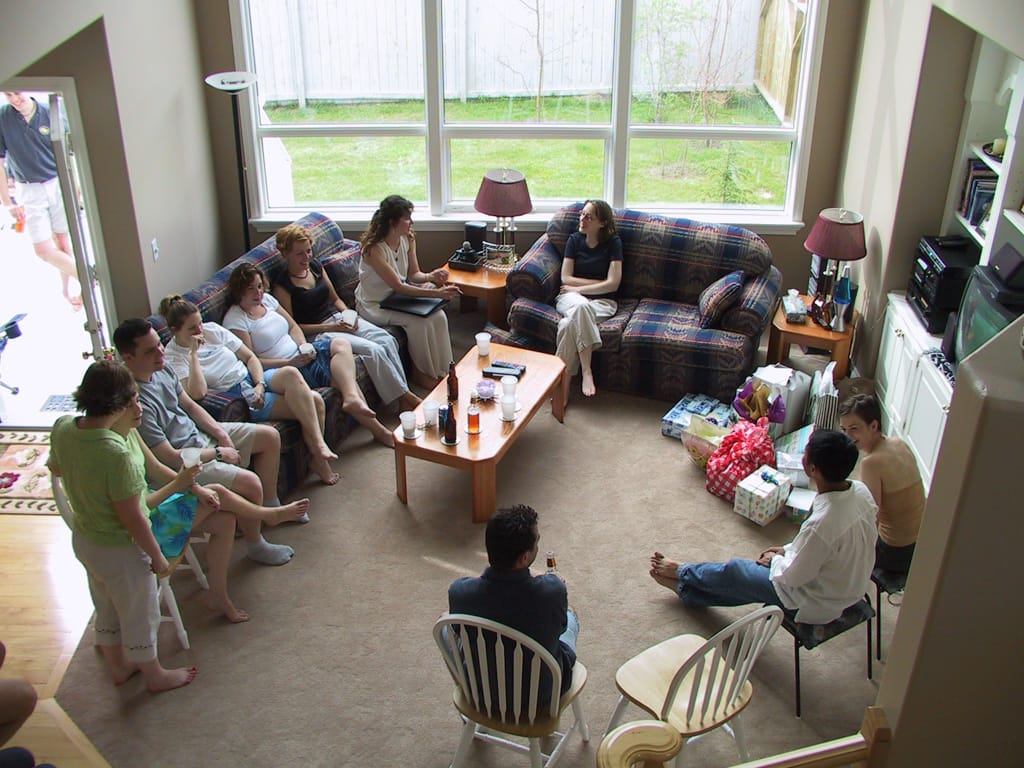 I have no idea what brought that on. Stuart and Therese are two of my closest, most trusted friends. They’re the sort of people I have no reservations about helping, or asking for help. Sometimes, I swear the human mind is a scary, unforgiving place.

Or it could just be me.