Warm weather has come late to Calgary, but it is quite a relief that it finally has. Shorts, sandals, t-shirts, and (almost) no fear of waking up to a White Christmas every morning. I haven’t seen my breath in well over a week, and if the forecasts are (reasonably) correct, I won’t see it again for a few months.

Deciding that I needed to take a break or suffer the consequences, I make a mental note not to go into the office on the weekend past. Well, except for Saturday — but it wasn’t to do actual work. It was to finish construction on a site for the Toronto Railway Historical Committee (of which I’m on the Communications Committee) — www.trhc.ca. They’re (we’re) just getting off the ground, but the president has done much in a very short period of time.

There’s a couple of weird bugs (only with Macs it seems), but for now it serves the purpose.

After that, I adjourned home. To watch movies. Not having Chris around to talk with at home really brings me down sometimes.

Sunday was significantly better, not only from an activity perspective, but also from a weather perspective. It was already well into the mid-teens when I left to wander around the Lilac Festival that was taking place on 4th Street, from 13th Ave. SW to Elbow Drive. Almost 15 blocks of street vendors, street performers, and about half of Calgary. Despite all the people, I found it almost impossible to walk up and down the street without a huge grin — outside, in the sun, and doing what could easily be construed as summer activities. 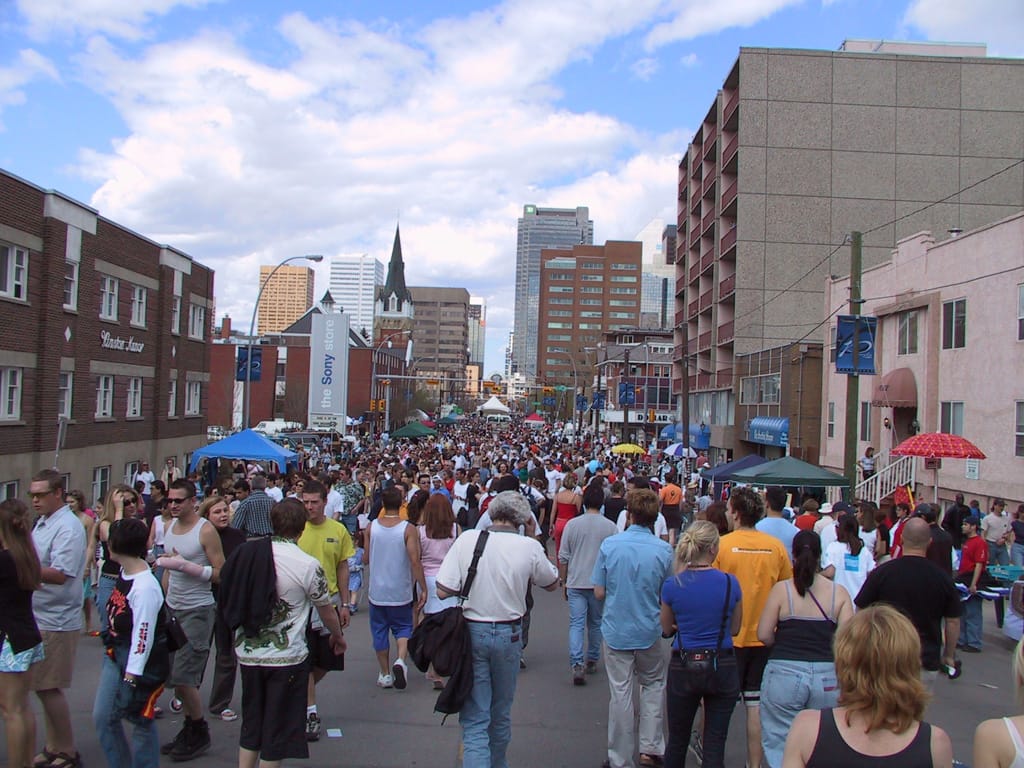 My first stop along the way was at Sushi Kawa, at 4th St. and about 22nd Ave. Not only was I deeply in the throes of sushi withdrawal, it was a good chance to visit with Kaz, who works there.

It was a bit of an odd experience going into a restaurant on my own. Sure, I’ve gone into fast food joints on my own before, but an actual restaurant — that’s a new one for me. But there are advantages in Japanese restaurants: Stools at the sushi counter.

The road was beyond packed by the time I got back outside. But I pressed on, walking the length of the street to see anything of interest. Aside from a steel drum band (that actually made Enrique Iglesias sound good), a one man band that did a startling good rendition of Kurt Cobain, a belly dancer, and the living statues ... it wasn’t all that thrilling. I kind of missed the Buskerfest in Ottawa during the summers. Far more entertaining.

Reaching the other end of the road, I returned to the apartment to rest a while before heading over to Millennium Park for a free concert by the Calgary Philharmonic Orchestra. The CPO, like many orchestras, is suffering from lack of interest. This was their attempt to make themselves better known, and hope that it will generate a little more revenue for them in the long run.

It was really nice to sit on the grass (but watching for all the goose droppings) and listen to a good orchestra play live music. It was really good to really see the stereotypical view of Calgary being shed away as they played traditional English folk tunes, music from Les Mis, even a piece composed by the resident composer (which sounded not unlike a Stravinsky-influenced John Williams).

Until they started playing fiddle music. So much for smashing stereotypes.

They finished off with the theme from Star Wars. They did a pretty decent job of it, although I personally think the tempo was too fast.

Concert over, I proceeded to wander around the river and see what there was to see. People were out skating, biking, jogging, walking, but most of all, enjoying the warmth. It’s been a chilly start to the year, and I think we’ll all very happy to have it a little nicer around here.

And now that I’ve said that, we’re probably gonna have a blizzard on Sunday...