Although it’s very tempting to say that it’s the beginning of the end — it wouldn’t really be appropriate.

It’s no longer a guess, it’s not a possibility, it’s not even a plan anymore. It’s fact. Chris is going to Japan. On Thursday (9 May 2002). For an entire year, he’ll be teaching children of all ages the fine art of writing, reading, and speaking English.

Be afraid. Be very afraid.

Friday marked Chris’ last day at Critical Mass. It was an emotional day for many people, including myself. Although it does sound a little strange that Chris and I not only work together but live together, you do need to understand that it works very well for us. We don’t see each other much around the office (we’re on different floors, different projects, and more times than not, all we get to do is nod at each other), so a lot of the time we see each other is at home, or when we’re out with friends.

I’ve known Chris a very long time — now over half of my life. (I’ve known Stuart just as long, and Therese not too far off.) I’ve lived with him for two years. (In fact, Chris will be leaving just a couple days shy of his two-year anniversary in Calgary.) It’s going to be hard to not have him around.

To mark his departure, we wanted to do something special. We wanted to give him something that he’d not only remember us (and I’m not referring to just Therese, Stuart, and myself — I’m referring to almost everyone he knows in Calgary), but something he’d use. Knowing that Chris will be completely overwhelmed by everything he’ll see and do while he’s in Japan, I figured the best thing was to give him a digital camera. I threw the idea out to the ABC — the "Asian Brother Crew", who pretty much all agreed that it was the best thing going.

There were two tacks that we could take — get him a cheap camera and have a small number of people, or get a good one and include a larger number of folks. Teak and I discussed this at length and decided to "go big, or go home". (Or as my dad would say: If you’re going to do something, do it right.) So Teak gathered a small flock of people and raised a small fortune. Although I was prepared to put in the lion’s share of the cost, I didn’t have to in the end.

This wasn’t Chris’ only gift from friends. Jensenne and Jeanette, with photos and blurbs from friends, made Chris a scrapbook to remember what he was leaving behind. It was a great combination of fun, goofiness, old pictures, silly pictures, and a lot of people who wanted Chris to not stay away.

As for the last hurrah, we all agreed that Sakana Grill was the place. Teak made the arrangements — actually talking to the manager (it’s a lot easier to have a guy who can speak Japanese to make a reservation at a Japanese restaurant), and reserving enough places for 50+ people. This wasn’t all just for Chris, though — this was also for Nathan (in our AppDev department) and Jen (who had been filling in as our receptionist), who were also celebrating their last day at Critical Mass. 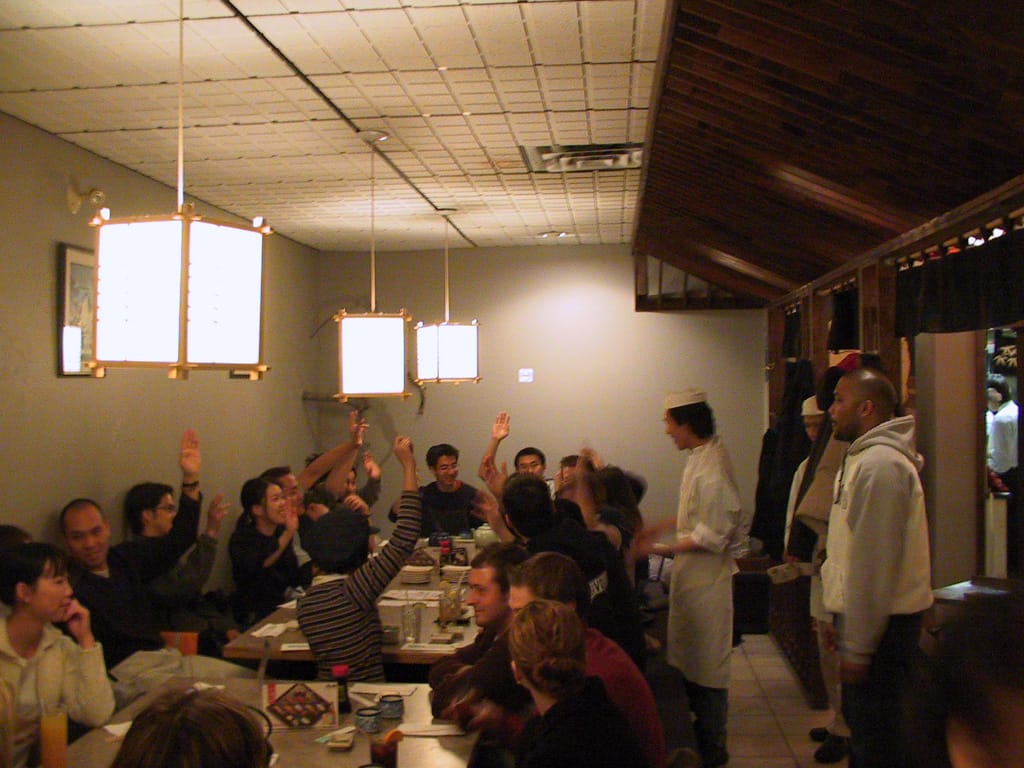 We had 43 confirmations on Friday morning. There were at least 60 people when Chris, Tamara, Stuart, and myself arrived. (Stuart is not Therese’s Stuart — this is a new co-worker who’s trying to get to know people.) We had a hard time sitting in. But we weren’t the last. We actually overflowed the area we were sitting. It was crazy.

After dinner, the immense crowd broke up, and we ended up with the ABC, plus a couple of others. Plans were loosely set, mostly that Chris had to go pick up Kaz. It was decided that the bulk of the group would go to Cinescape to play video games, and we’d give them a call when we were more organized.

Kaz is short for Kazumi ... and is Chris’ new girlfriend. 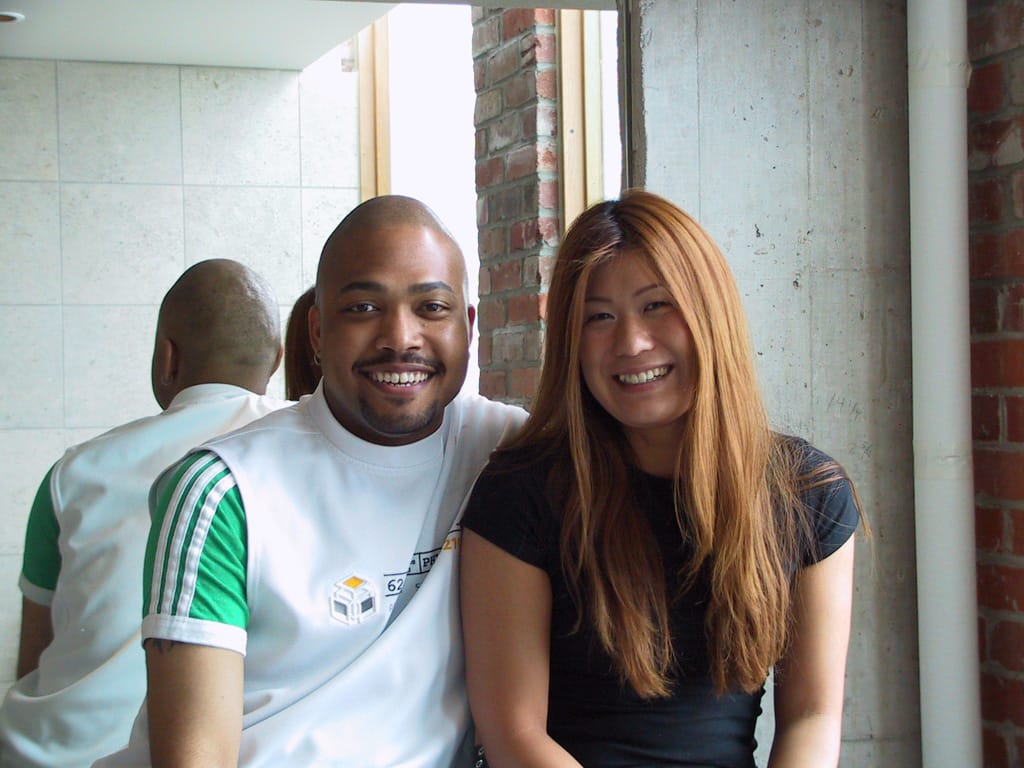 Yeah, he has a girlfriend. It’s kinda creepy how well they get along, especially considering at the time the two of them hooked up, Chris already knew he was going to Japan. (Kaz, by the way, is Japanese, and has only been in Canada for about a year.) She knew he was going to Japan. But they’re both serious about each other, to the point where they’re waiting on each other until Chris gets back a year from now.

We picked Kaz up from the Petro-Canada on 4th St. (she had just come off work) and dropped her off at home. We returned to our apartment where Chris got cleaned up, I tidied the apartment, and then starting calling around to see what people were interested in. The plan ended up with everyone coming over to our apartment for video games and movies. Not particularly original, but still fun.

It would be the last game/movie night in our apartment. 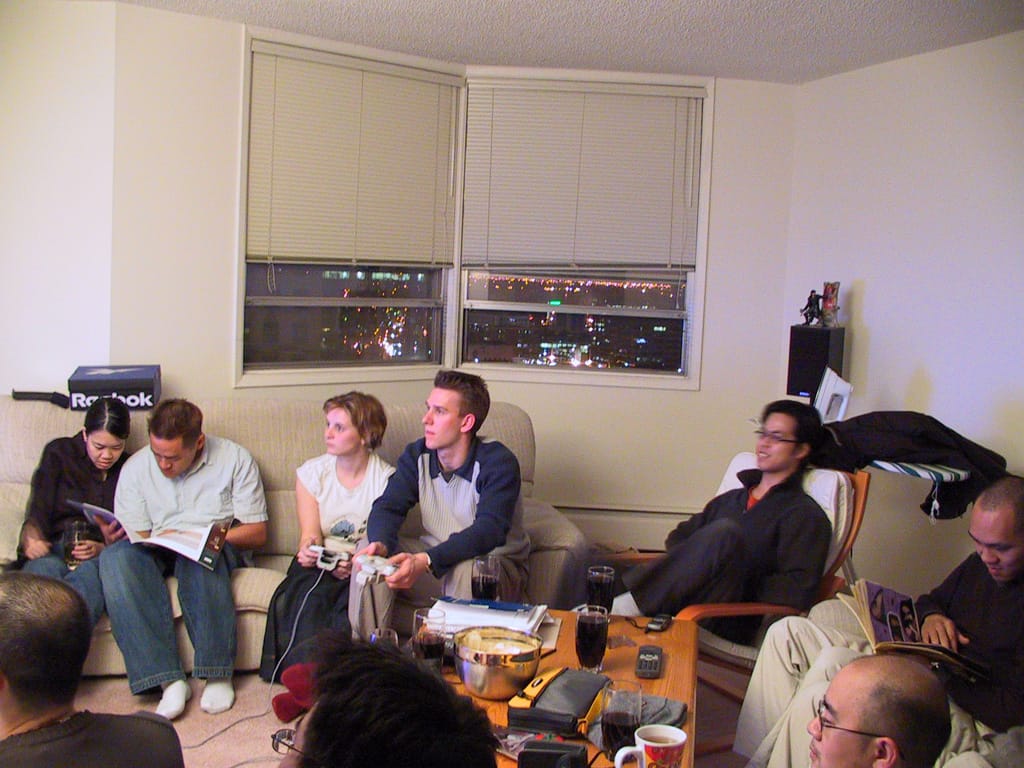 Chris went off to retrieve Kaz as everyone started to arrive. Pretty soon, the living room was full of people yelling and screaming (due to invigorating games of Virtua Tennis). We switched to a movie a little later on, "Shaolin Soccer", which several people hadn’t seen.

The last game night ended around 2am, with everyone heading to their respective homes. Unfortunately, Chris and Kaz didn’t get back until everyone was leaving, and missed out on the festivities.

Yesterday, we planned to have the whole crew go down to Chinook Paramount to watch Spider-Man, for a last group night at the movies. I tried to organize this within the span of about 20 minutes, with some degree of success, but in the end (owing to scheduling and communication problems), Chris was unable to come (he has promised to pick up Kaz after work, which conflicted with the movie time). We did luckily end up meeting for tea/coffee/dessert at Bubblemania on 16th Ave.

This morning was one of the big "lasts" — the last dim sum. This was when it finally hit me. The other lasts hadn’t done anything, but this one left me really thinking about what was going to happen. Although Chris does intend to return in a year (because of Kaz), there will always be the possibility that he may never return from Japan. I had to give a moment of pause when I realized that there was the chance that this is another chapter of my life about to close.

But not as hard as the ones that will follow.