Yeah, I know, the holidays are over, why the heck am I writing about it now? Simple: I got away from computers for two weeks, and haven’t had the time to write until now.

Unlike last year, I spent roughly half my time here in Calgary, and the other half in Toronto. Why didn’t I just make up my mind and do one or the other? Well, I suppose I could have, but the cost of flying to Toronto for the entire time was pretty steep (go figure), and I did want to go home for a while. But because every time I go back to Ontario, I remember why I live here, I didn’t want to stick around too long.

No, I don’t hate my family or friends. I don’t know what it is. I just feel ... weird whenever I’m in southern Ontario. Maybe it’s the never-ending city that gets to me, I dunno.

At any rate, I made the trip to Toronto very early on the 23rd. Originally, I was supposed to leave at 6:30 on the morning of the 23rd. However, Air Canada Tango cancelled that flight and bumped me back to 12:53am. Oh yay. How I love red-eye flights.

Yes, I flew Tango. First off, it’s meant to be a low-budget airline killer. (Canada 3000’s already gone under, I suspect Air Transat might have trouble in the near future, but the real fight will come when Tango tries to dive into WestJet country.) As such, it’s as no-frills as it gets. Even the chairs show it — they’re grey, and don’t even have those fancy flaps of fabric on the headrests. Even the ubiquitous peanuts (now pretzels) cost $1.

And boy, are the staff surly at one in the morning! I was amazed at the curtness of the flight attendants. Just because you got stuck with a bad shift doesn’t mean you take it out on the passengers. Welcome to the travel industry, crap happens! And the Head Flight Attendant must’ve smuggled her bong onboard ... the number of times she stopped talking in mid-sentence for upwards of 30 seconds before resuming was astounding.

Luckily, I slept the whole flight.

Arriving at 6:30am EST was a joy. I hate Pearson International enough as it is — the parking is insane, the baggage system has to be the slowest in Canada (even despite the size), and usually by the time I get there I just want to get out of the airport, so I’m generally cranky anyway. Cathy was going insane trying to figure out where I was — the flight was a little late, and bags took nearly 30 minutes to come out — but finally we were off to Oakville.

Neither of my parents knew I was coming in so early. They were expecting noon. However, in the interests of their sanity, I hadn’t mentioned that my flight had been rescheduled. (Next time, though, I’m not telling anyone the flight time, and I’m taking a cab.) While waiting for mom and dad to rise, I started making breakfast.

And nearly burned the potatoes. Not my best outing, unfortunately.

The 23rd was generally slow day. A little bit of running around, some decorating (the tree was not yet ready), and lots of chatting. The only thing that would have made it better was if it had snowed.

On the 24th, we had lunch with my aunt (my father’s sister) and cousins Erica and Lauren. I hadn’t seen either of them in quite a while, and we had a ball listening to Erica’s traditional Christmas banter. Sometimes I swear Erica should be a comedienne, or at least give amateur mike night a shot — she’s certainly got the wit for it.

Christmas Eve was the traditional roast ham and scalloped potatoes. For me, Christmas eve just isn’t right without them. It was also a late night for us — Craig, dad, and I were all up until almost 2:00 Christmas morning. It was going to be the start of a very long day.

Christmas morning started a little early, around 9:00 or so. Coffee and Baileys (for those who drank it, I still avoid coffee) were the order of the moment. Given the hullabaloo to take place that evening, it was probably best that most of the family started to tranquilize early in the day. (Coffee and Baileys would give way to Caesars later in the morning.)

Before breakfast, we gathered in the living room to open presents. In yet another tradition that seemed to have no specific beginning, I played Santa, and handed out presents around the room. It was interesting to watch people open presents when I had none. Being out-of-province, I was fortunate in not receiving much of anything (which believe it or not, I’m quite happy about).

All in all, I received three gifts. The first was my grandfather’s pocket watch. I never met either of my biological grandfathers (I did have a maternal step-grandfather for many years) — they both died before I was born. My paternal grandfather died when my father was 18, and it was his watch I received. It’s a grand old piece, which my grandfather received from his parents when he was 21. We found this out by accident, when I unscrewed the back plate to find an inscription my father didn’t know was there.

My second gift was a snowboard. Apparently someone had been listening a little to close to my interest in TRYING snowboarding. (I have to emphasis "trying" because someone equated it with "wanting to take up" instead of "seeing if it won’t kill me first".) So, yes, sometime soon you can expect a lovely little tale about me breaking my tail trying to get down a mountain.

The third was probably the most special of all: I got a brother-in-law-to-be.

Cathy and Craig have been together for about five years (I don’t know exactly how long). They’re about as perfect a couple as you can have — after five years, they still sound like they’ve only been dating for a week. (It’s actually sickening sometimes.) Cathy has been after Craig for marriage for about a year, after Julie (an old family friend, and Cathy’s best friend) got hitched in December 2000. Craig waited until the right moment.

As I handed out gifts, I picked up three identically-wrapped, but different-sized, boxes. One was obviously a ring case, one was about the size of a large brick, the largest the size of a shoe box. None were labelled, but Craig indicated they were for Cathy.

My sister lunged at the ring box. Instead of a ring, however, she found a note that read: "Birks was sold out of everything, and all I could get was this box."

Cathy, fortunately, has a very good sense of humour.

She opened the largest one next. Under the wrapping paper was, in fact, a shoebox, upon which Craig wrote "This is not a sweatshirt, this is a remote control". (The running joke the night before was that Craig was getting Cathy a remote control for Christmas.) Inside was a sweatshirt.

On to present #3. This was an electric toothbrush, something Cathy wanted for a while, so I gathered. But wedged inside the styrofoam packing was a slender silver ring. I don’t think I even heard Cathy say "yes". 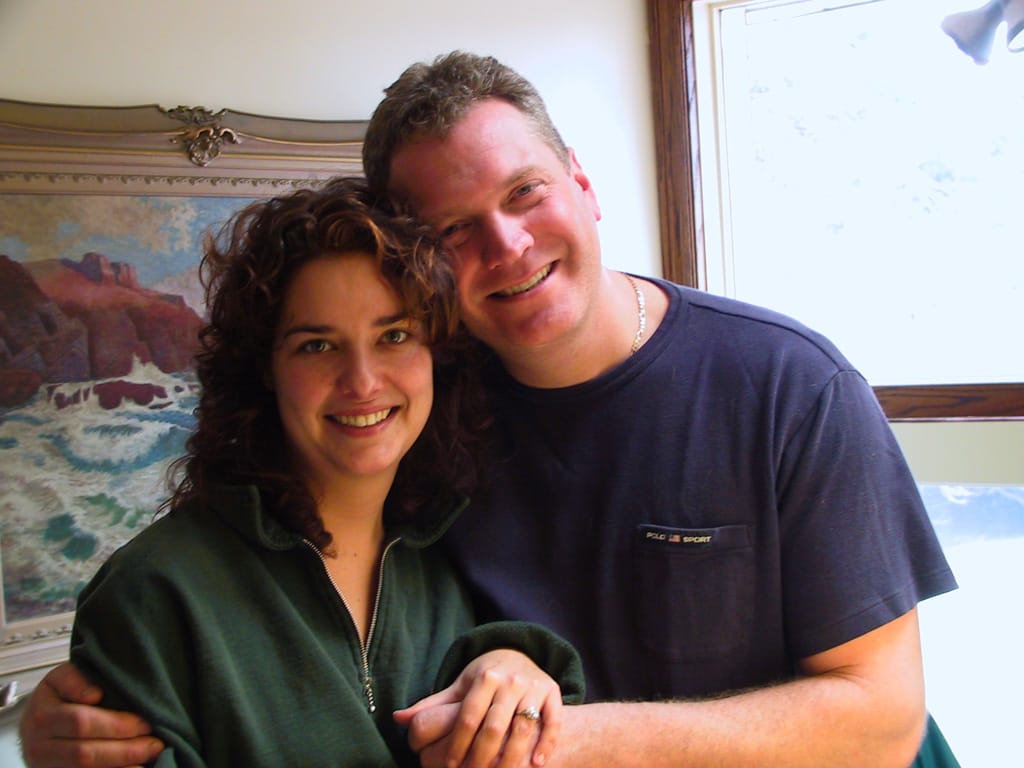 A note on that ring, by the way. It’s my mother’s mother’s original engagement ring ... with a couple modifications. (After my grandfather died, someone (we don’t know who) turned the ring into a dinner ring.) But with a resetting, the ring will be Cathy’s.

Following our rather emotional moments by the fire, we ate breakfast (my father’s secret recipe for pancakes) and started to prepare for dinner. We were having a lot of people over, and it was going to take a while to get all the food ready. It was going to be a dinner to remember.

I honestly don’t remember the last time the entire Robinson family had come to my family’s home for Christmas dinner, but I’m willing to take a bet on about five years. It’s certainly been at least that long since we were all together at the same time, only now both Mark and Julie are both married (their spouses were also in attendance). In fact, it was the first time the Sowrey family was outnumbered at its own table. Also there was another relative, Brian Hogg. (The Hoggs are a couple branches over from the Sowreys, but I can’t remember exactly where or how.)

Dinner began shortly after 4:00pm, when guests started arriving. Dinner was still being prepared (when you make a full roast turkey and a full roast beef dinner, you need two kitchens), which gave everyone else a chance to catch up with one another. We wouldn’t eat until about 7:00. And eat we did...

A few helpings, lots of dessert, and perhaps a little too much to drink, and we were already to start playing games. Specifically, a game called Outburst, where the point is to try and guess all the items on a Top 10 list. It’s not as easy as it sounds. Even with topics we knew well, we never once got all 10 items.

Dinner ended around 4:00am. I didn’t make it that long — I went to bed somewhere around 1am, as I knew I had to be up reasonably early (before 10am).

On Boxing Day, I braved the trip into Toronto (via Go Train, what else?) to visit an old friend of mine, Mikki. She’s an old friend of mine from university who’ve I’ve been promising to visit with for ages, and it was high-time I did as I said. (I know, there’s about 20 of you who I should also visit with, some of whom have been a very long time, but I’d need at least a week for all that.) As it stands, I was supposed to meet with Dave on the following day, but I screwed up my schedules and had to cancel on him literally at the last minute.

Before I knew it, I found myself at Pearson International again, waiting for my flight to Calgary. Like the flight out, this would be wall-to-wall people.

The rest of the vacation went well until Sunday, when a bad bit of Chinese took me down for a couple of days. I hadn’t had food poisoning in many years, so whatever it was that took me down was pretty strong. I’m still recovering. One advantage of it, though...

I’m losing all that weight I gained over the holidays.