Coming into work on a Friday with a hangover is one of the worst feelings.

Well, coming in on a Monday is probably worse, now that I think about it.

Last night was Critical Mass’ annual Christmas party. This year, we held it at the Scandinavian Centre in northwest Calgary. It’s basically a large hall — we needed something that could pack in about 400 people. But that wasn’t all that would be there...

Chris, Adrian, Doug, and I arrived late. Chris had to make some last-minute changes to the video on our Christmas promotion, so we didn’t get to the party until nearly 7:30. (It started at 6:00.) Luckily, they hadn’t taken dinner away yet, so we got to partake of the meal. 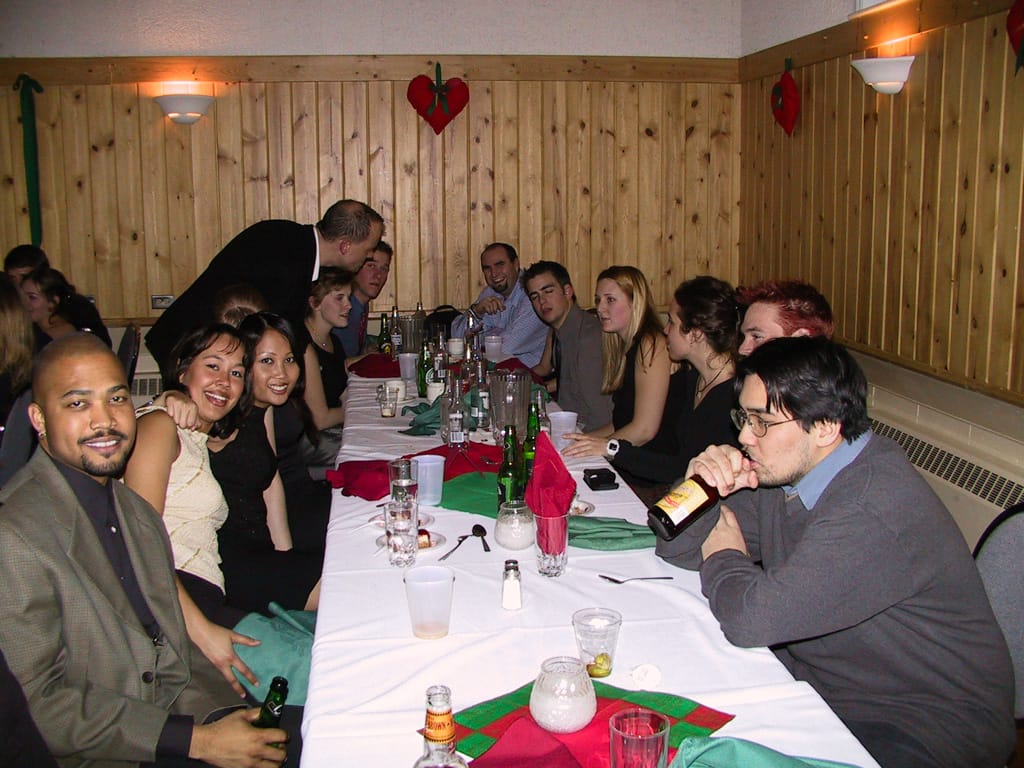 The awkwardness of being the last people to arrive soon subsided, and we started chatting with those around us. Luckily, the last available seats were with people we knew. Not sure if they saved them for us or not, but it still worked out. 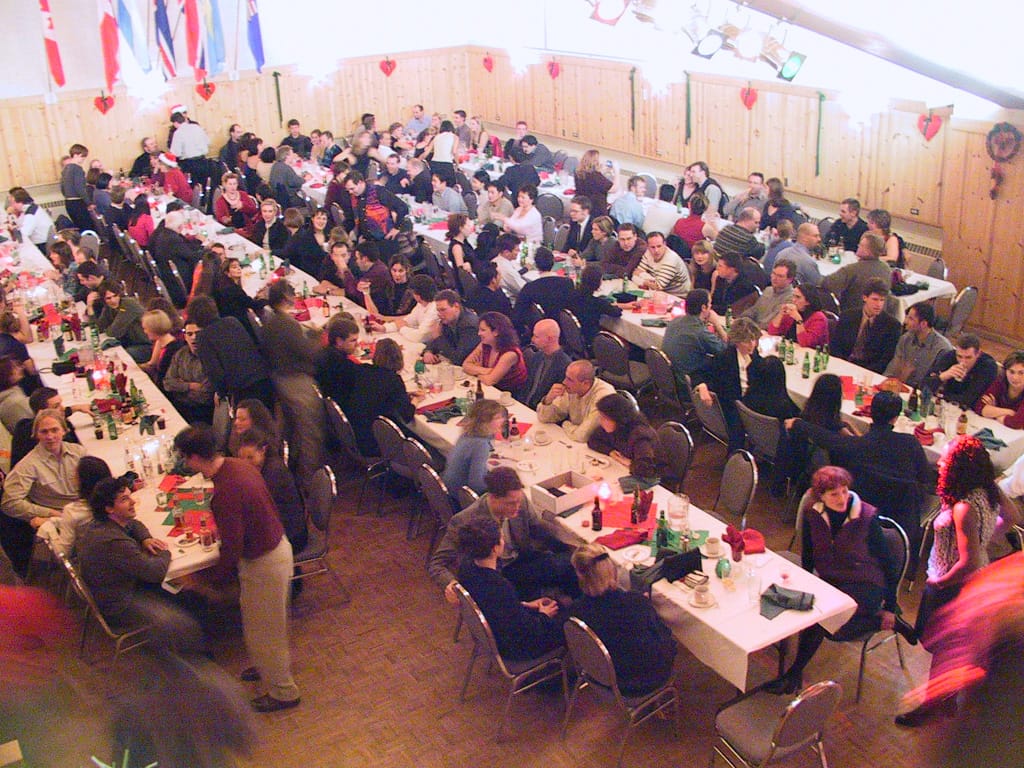 The entertainment began about a half hour after we arrived. First were a couple of speeches by Jerry (our CEO, based in Chicago) and Diane (our President, based here in Calgary). Then it really began. A man walked up on stage. Didn’t know who he was, had never seen him before. He wore a Santa hat, a suit with a bowtie, and wielded an accordion.

Okay, accordion music, I thought, I can handle that. Then someone started talking to the crowd. It wasn’t the accordion player. I looked around, trying to figure out where the sound was coming from. It was a lounge singer. A really bad, exceptionally cheesy, lounge singer. Hired to torture us. He made bad jokes, had bad hair, had really bad taste in clothes. In short, perfect for the job.

At first, he just clowned around, trying to get us to accept that he was bad. Didn’t take a lot of effort. Then he switched into the next part of his act. Armed with what had to have been a premeditated choice, he pulled Dan (our Canadian Vice-President and head of the Mercedes account) on stage. To do a duet. Of Sonny and Cher. And Dan lost the coin toss.

Not that Dan had a choice anyway...

It got worse. After the Sonny and Cher revival, he grabbed three more people (all bald men) and had them be three of the Beatles. They sang "Twist and Shout", and surprisingly well, I have to say. But then the coup de gras came when he found five more people (including two of our more introverted staff) to come up on stage and become "The Village People". 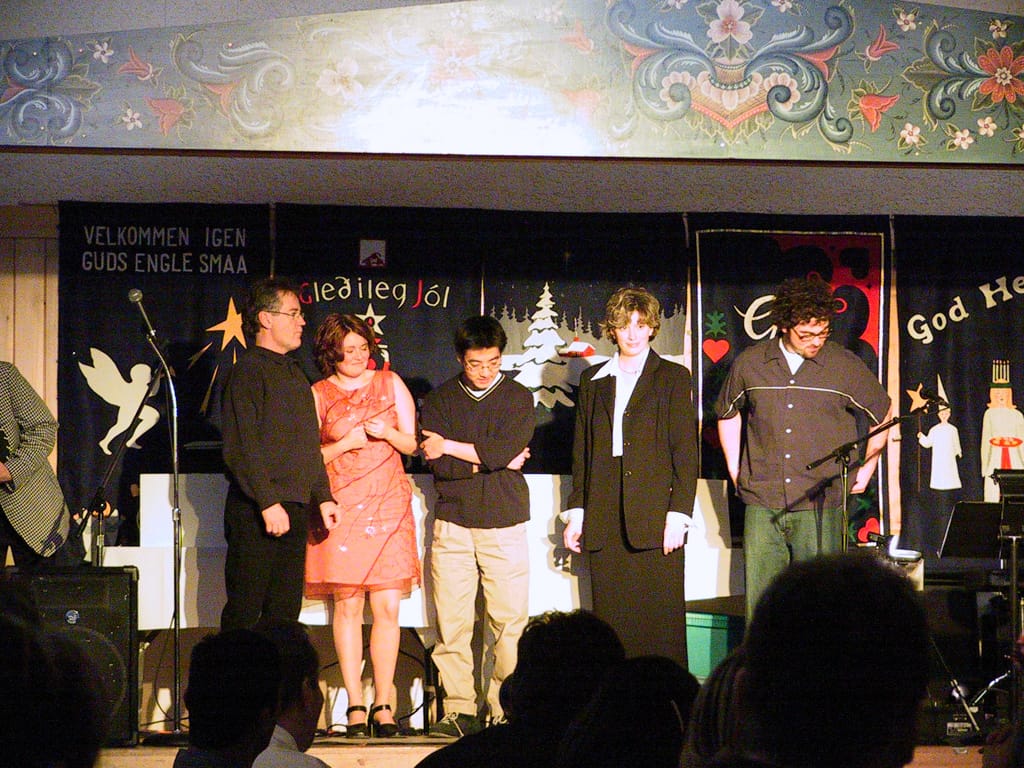 All in all, the guy’s act was pretty good. And we all really needed the laugh.

Soon, the entertainment was over, and the dancing began. People milled, people talked, a few left early, but a large number held out to the end of the night. About 2:00am.

Fortunately, we didn’t have to be in until 10:00am. Even then, some still showed up late. But today wasn’t a big day anyway — the office officially closed at 2:00pm MST.

In other words, that’s the news, and I am outta here...

To each of you, I wish the best of holidays and a safe break from your daily life. May you all have a wonderful time, and I’ll be writing more in the New Year!