Well, I had meant to write this earlier this week, but after what happened on Tuesday, I hope you can understand why there’s a delay.

Most of you probably don’t know that I went back to Toronto on the weekend. It was a little longer than the whip-in/whip-out trips I usually do for such things — normally I fly out Friday evenings and fly back Sunday evenings, but I took two extra days this time. Work has been stressful, and this was a more special event than normal, so I wanted to take my time.

The event was the wedding of perhaps my oldest friend, Mark Robinson. How old? Well, let me put it to you this way — many people can remember, at least vaguely, when they first met someone. I don’t remember when I met the Robinsons. Our parents met about 30 years ago. My mother and Mrs. Robinson are best of friends (we’ve often joked about putting in a dedicated phone between the two houses). We used to have Christmas and New Years dinners together. It’s a long, sordid history.

Mark, his sister Julie, my sister Cathy, myself, and two other neighbourhood kids, AJ and Kelly, made up the neighbourhood mob. We played baseball (with tennis balls), swam, help mini-Olympics, and generally raised a ruckus around the blocks. Mark was generally the ringleader, being the oldest of us — me being just shy of two years younger.

When Mark was enrolled in Appleby College in Grade 4 or 5 (can’t remember which), we started seeing less of him. When Grade 9 rolled around, he stayed at Appleby nearly all the time (it was a requirement). Then came university, and I saw less of almost everyone. Over the years, separation was inevitable.

Cathy, on the other hand, stuck to the Robinsons like glue — Julie still being one of Cathy’s best friends. As a result, Cathy got to know Mark’s friends from Appleby and university. (The keg parties were talk of legend after a while.)

When news of Mark’s engagement came around last December, I felt like I’d missed something. About 15 years, to be exact. Once upon a time, I’d looked up to Mark — he was my role model as a child. He was strong, brave, and a natural leader. Sure, we had our disagreements (most friends do), but overall I still admired him. News of the engagement drew pangs of regret — I’d stayed away so long, I’d missed watching one of my friends grow up. I barely knew the person I had once aspired to be. I didn’t even know his fiancée, Darla.

So needless to say, I was quite happy to hear I would be invited to the wedding. I had missed Julie’s wedding (I couldn’t afford the flight to Antigua from Calgary at the time), but I wasn’t about to miss another Robinson wedding. So I booked a flight (a bit more expensive than I would have liked, admittedly) and whisked myself back to Ontario.

I left Friday morning. That morning, it was 3 degrees Celsius in Calgary. It would be 29 degrees when I landed in Toronto. Choosing an appropriate set of clothes to handle the change in weather was mildly difficult — I froze in Calgary, and boiled in Oakville.

The wedding was on the Saturday, and would be the first one I’d been to that started in late afternoon (4:30). It was a little odd, because it meant I was idle for most of the morning. So naturally, there was a massive rush around 3:50 to get everyone together and out the door so we could make it on time. As Appleby College is in Oakville, it was a quick trip over.

The ceremony was in Appleby’s chapel, an old ivy-covered building designed in the traditional British school chapel style, with pews running perpendicular to the altar, rather than parallel. It was also traditional in that it had no air conditioning. Although my new suit is much lighter than my previous ones, it was still very warm. Most people were sweating profusely (I can only imagine what Mark and Darla must’ve felt like).

It was a large affair — about 150 people (that’s a complete guesstimate, I have no idea really how many people showed up). The wedding party had four people apiece. Family was everywhere.

Being an Anglican ceremony, it was quick. A few quick words, the odd speech, and in 15 minutes, we were back outside. Although still 30-odd degrees, it was cooler than inside, and had a breeze. We stood around, took lots of pictures of the newlyweds, before heading off back home for a quick stop. 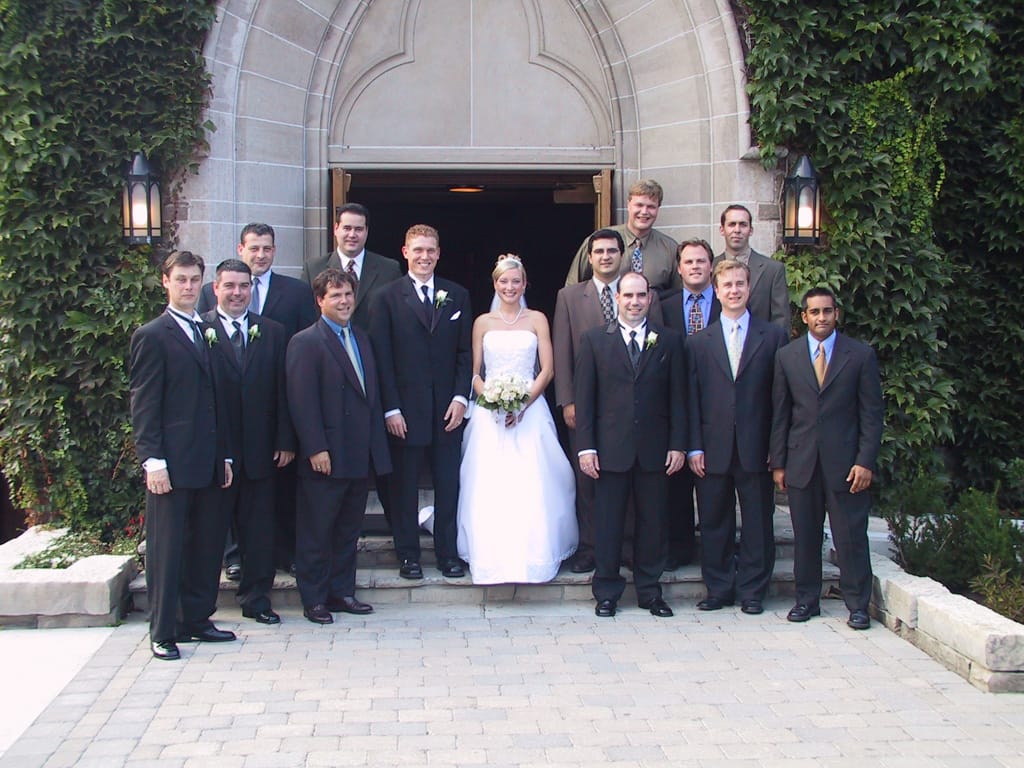 Then it was off to downtown Toronto, and the reception at the University of Toronto’s Hart House. Hart House (just west of Queen’s Park) is one of UofT’s oldest buildings, constructed in the late 19th century. It’s built in the London gothic style, and provided an unbelievable backdrop for the wedding. Mark and Darla had provided for their guests lavishly — oysters on the half-shell, smoked salmon, and an open bar with nearly unlimited supplies of excellent red and white Henry of Pelham wines. (Two of their wedding party — a married couple — run the vinery.)

And that was just the pre-reception. Dinner was yet to follow.

After another round of pictures in the Hart House courtyard, we moved indoors to the grand Great Hall for dinner. I was seated with my parents, the Robinson’s, and their relatives (not all of them, anyway), right in front of the head table. Mr. Robinson gave his speech in typically Mr. Robinson style (a combination of dry wit, bad jokes, and the odd bout of seriousness), followed by speeches by the best man (Brent) and maid of honour (Darla’s sister, Jillian).

Then dinner was served.

I can’t really think of anything else to say, but "wow". It was an amazing meal — Mark and Darla, unfortunately, had a reputation to uphold (started with Mark’s keg parties), and they had to deliver. They did so in exceptional style and taste:

The appetizer was roasted butternut squash soup with fresh rosemary with a dollop of low fat maple yogurt. It was followed by baby spinach leaves with toasted pecans, strawberries, and crumbled Stilton cheese with an apple-Dijon dressing. Eyaa. The entree were medallions of beef tenderloin (the "medallions" were huge — the size of coffee cups) with roasted shallots in a port reduction. Yowza. Dessert was fresh fruit with a warm triple sec sabayon and a crisp wafer. Topped off with a small glass of Late Harvest Vidal dessert wine.

My tastebuds were in Heaven.

I was one of few who actually ate everything. Most people couldn’t pack it all back. Their loss — the dinner was outstanding. Although it did take a while to digest.

Mark and Darla seemed to hardly eat. They spent a good chunk of time visiting the tables, seeing the people they invited, and being the quintessential hosts. They made brief trips back to the table for bites of food, but spent most of the their time walking around. Their only other interruptions were for kisses.

Goofy tradition, that kissing thing. Never understood that. But things were different here. No tinking of glasses. This round involved answering trivia questions, kept in balloons that had to be popped before a question could be answered. (I presume this was to prevent people from looking at a question and then backing off if they didn’t know the answer — the popping balloon put the people at centre stage.) I was impressed with myself — I actually knew most of the questions about Mark. I felt a little relieved that I hadn’t drifted so far away.

After dinner, it was time for Mark’s speech. (He spoke for Darla as well — I guess she didn’t want to make a speech herself.) It started off with:

Mark’s speech used humour, history, and few tugs at the heartstrings. (Julie threatened to kill Mark if he ever made her cry like that again.) Suddenly, I didn’t feel quite so distant.

Dancing would have began after that, but first one little bit of housekeeping had to be taken care of. From the day Mark proposed to Darla, there had been a joke floating around, and Ed (one of the groomsmen) was to be the instrument of delivery. Originally planned for the Recessional during the marriage ceremony, it had been delayed until the end of dinner.

Ed walked over to the dance floor, picked up his guitar, and prepared to play. A few of us knew what he was going to sing. As far as I knew, Darla didn’t know — which, I believe, was the point. After a quick tune, he started strumming and singing. A few people picked it up right away, but it wasn’t really until the chorus that most people, Darla included, realized he was singing Simon and Garfunkel’s "Mrs. Robinson". He would follow up with a U2 song, but I’m at a loss to remember which one...

The First Dance came soon after. People then began to mill around — some danced, some went outdoors, and few began to trickle out the door to go home. We stuck around until closing time, somehow...

Perhaps it was the drink, perhaps it was exhaustion, perhaps it was the heat — I still had trouble looking at Mark and accepting that he was married. (I still have that trouble with Julie, and she’s been married for 10 months.) It seems that the time from when I entered high school until now has just vanished. I’ve missed so much, and gained so little.

Hopefully, the next 15 years won’t go so quickly.