If there’s one thing Critical Mass knows how to do, it’s getting its employees horribly, horribly drunk.

Last year, this was courtesy of the Download Overload in Westbank. However, owing to financial downturns in the hi-tech sector as a whole (and our industry in particular, following the dot bomb), we’ve had to scale back. It’s probably a good thing — "The Trip" would have set the company back $120,000. That’s two people’s salaries for the year and the cost of our new Summer Social.

This year, we didn’t even leave the city. Instead, we went to a place called "Symon’s Valley Ranch", basically little more than an over-glorified RV park. Don’t get me wrong — it’s not that bad. Just that it had a lot of people wondering for a while. I think the intention was good, but I wonder if (assuming we have a Social next year) we’ll go back.

My day started around 1:30pm, when I arrived at the office. (Chris would not attend the Social this year — a friend was making a short visit to town, and he wanted to spend most of the day with them. I would take the company-sponsored bus to the Social, as Chris needed the car.) Several people were already there. Already the trash talk for the Big Game was starting...

Trash talk, you ask? That’s the Soccer game. We have a men’s soccer team. They’re good ... not stellar, but they’ve won better than half their games this year, so they’re better than average. However, the challenge was put forth — we’ve got a lot of very active women here, too. Although not on a team, they claimed they’d whip the men’s team in a match. Part of the afternoon’s events would include a short soccer game.

Although the busses (there were three of them) were to depart at 2:00 sharp, we didn’t have enough people to fill even one bus. (Our staff, regrettably, have a nasty tendency of being late, or not showing at all.) As it turned out, most drove to the Ranch (located in the northwest quadrant of the city). But those of us who took the bus were the cool ones.

We finally left at about 2:15, one of the busses staying around just in case stragglers finally appeared. As our bus weaved it’s way through the downtown streets, I heard the clinking of bottles — one of the Delichte brothers had smuggled beer in his knapsack and was spreading it around. This caught the attention of Di (our company president). The bus didn’t even make it out of downtown...

...before we stopped to make a beer run. Di, Jason, Philippe, and Tamara all raced down the block, returning with a couple flats of beer and a box of coolers. We were finally ready for the trip.

I was admittedly a little disappointed when we arrived at Symon’s Valley. I had expected at least a couple of trees. But the northwest is much more like prairie scrubland than other parts, so I guess I shouldn’t have been too surprised.

The main portion is the mess hall, which can accommodate our large numbers (probably one of the reasons why we went there) and a small bar. The entire motif is western, of course, which means a lot of wood, and a lot of kitsch. But what fun is a faux western ranch without kitsch, anyway? 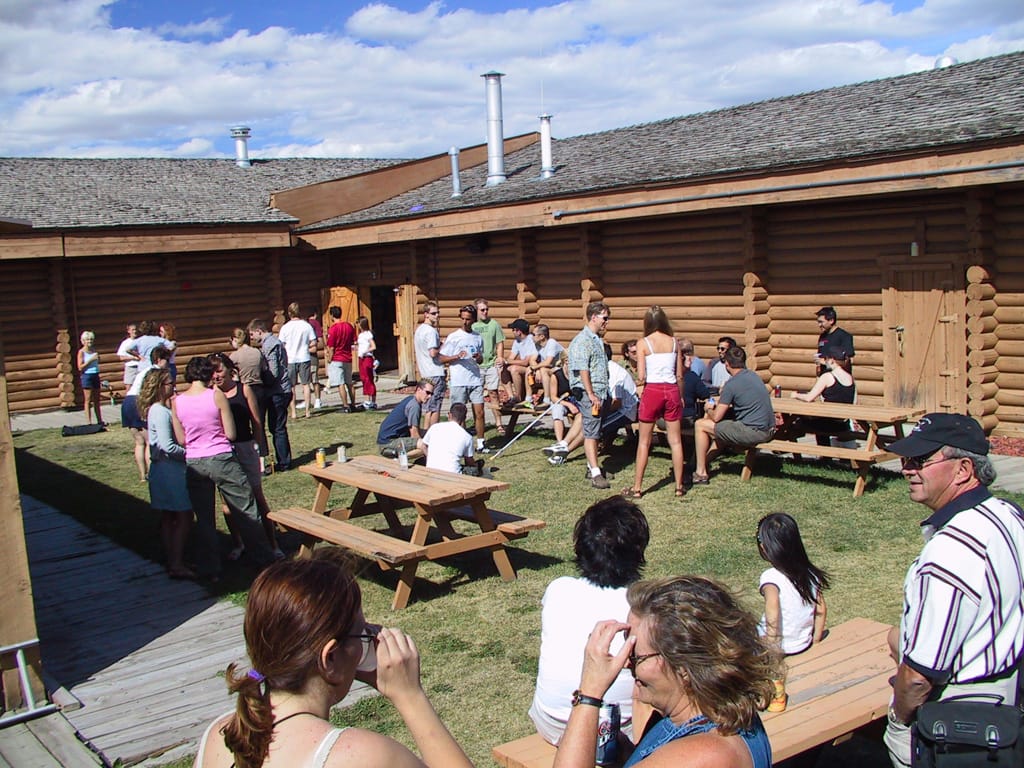 The bar, of course, was free. That took us about five minutes to figure out. It was unlimited, too. Also a bad thing. We had four days of drinking to make up in a few short hours. (Or at least that was the resounding belief.) We got started as soon as possible.

Around 4:00, the call for the Big Game began to circulate. It was time to find out who got bragging rights for the next year. (And believe me, it would last that long.) The Ranch emptied out onto the softball fields — the only place big enough for a game. Although there were no goal posts or lines on the field for soccer, a few plastic markers would define the field of battle.

The men were already out, changed into their near-luminescent orange shirts, and limbering up for the game. With Survivor’s "Eye of the Tiger" playing, the women’s team raced onto the field, ready for battle.

The game was a shortened one — normally an hour in length, this game ran only 40 minutes. The rules were also bent a little more — six men versus 14 women. Yes, slightly different odds, but you have to remember that the men had been playing together all season, whereas the women’s team was thrown together about five minutes before the game started. 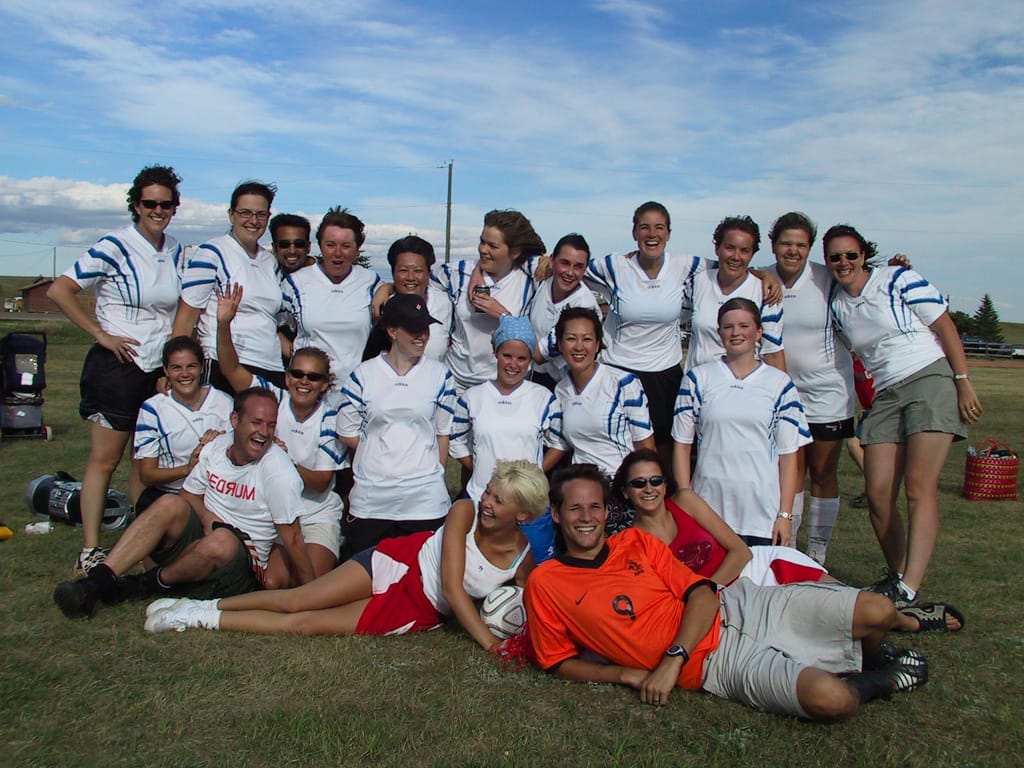 It took a while for the women’s team to get into gear, but with the help of Carmen and Max (who lead the cheers from the sidelines), the women managed to hold the men to a 2-2 game. Bragging rights, such as they were, would be limited to the individuals that day.

Returning to the hall, we proceeded to watch people attempt to ride the mechanical bull. (This was the entertainment for the adults — the finger painting and popsicle-stick picture frame making had been earlier in the afternoon.) There’s nothing more fun than watching your co-workers attempt to stay on a hydraulically-driven chunk of fibreglass ... well, actually, there are lots of things more fun, just not at Symon’s Valley.

Dinner appeared before too long, and we all lined up for grub. It was basically what you’d expect to see at a picnic — coleslaw, potato salad, buns, baked potatoes, but we also had roast beef and roast chicken. The beef was a little overdone, but nothing to make it really bad.

Before long, the announcement came — it was time to board the busses again. Our time at Symon’s Valley was over and we had to go home. It seemed almost a waste that it was only 8pm.

I wasn’t the only one who thought that.

As I approached the busses, Eryn informed me that one bus was going to Critical Mass, the other bus was going to Di’s house. Upon querying the destination of the second bus, I learned that Di had decided to invite a whole mess of people over for a post-picnic get-together.

Most of us boarded the party bus.

Di wasn’t there when we arrived, but Phil (her husband and one of our copywriters) was onboard, and so let us in. I wasn’t entirely sure if Phil had been aware of the ensuing party — but he seemed to be keen about it anyway. We were settled barely 10 minutes when Di, Laura, and Mel pulled up with the beverages.

Flats of beer. 24 cans to a flat. 15 flats in total. (Did I mention that Di’s our company president?)

The next five hours were a bit of a blur. I don’t remember entirely everything that happened. But generally, silliness and stupidity abounded. My camera started making the rounds, carried and operated by others, so I still managed to get a record of the ensuing mayhem. 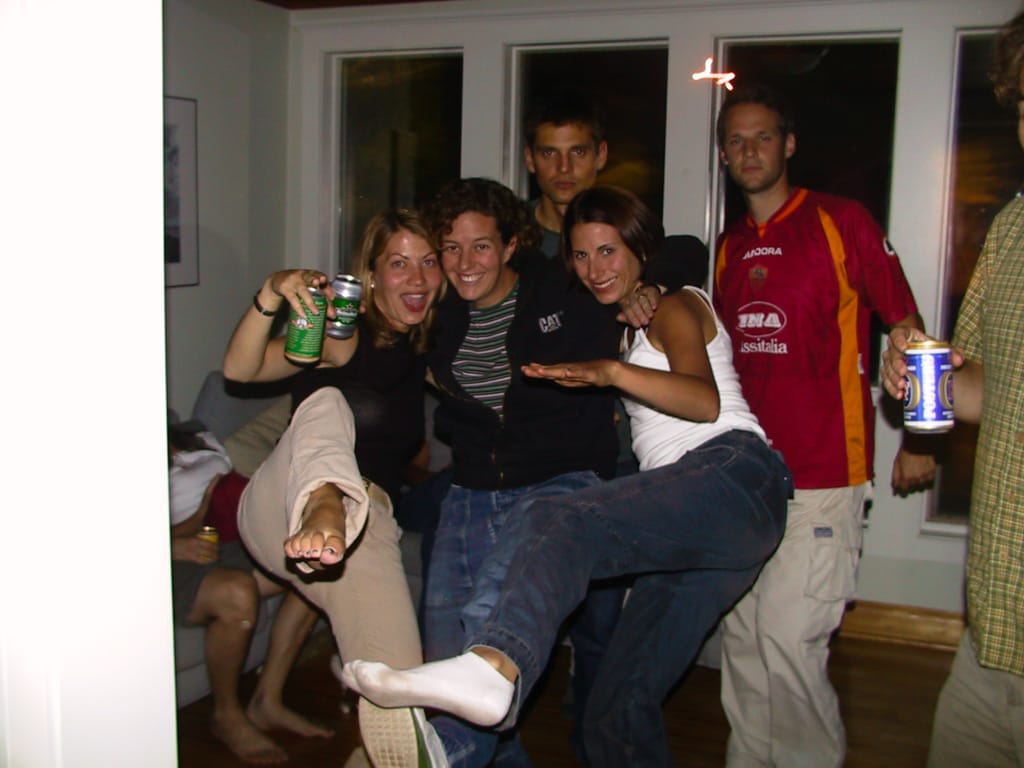 I bailed out around 2:30 in the morning, though I can’t say with exact certainty. I was drunk. Very drunk. The party continued until the wee hours of the morning, when the cops finally showed up to shut everything down. A true sign of a good party.

Needless to say, following Saturday’s debauchery, I’ll not be doing any celebrating any time soon. It takes a lot of energy to do all that, and after a weekend like the one I just had, I’ll need a little time to recuperate.

Besides, I still have a hangover...