On Wednesday, I came home to something different. Chris and I have a new roommate.

Now I knew about this, so it wasn’t surprise. Nevertheless, it is taking a bit getting used to. She’s fairly short, a little overweight, a quite aloof. But she’s quiet, so we all get along. I suppose the only drawback is her tendency to shed.

Oh, did I forget to mention that our new roommate is a cat?

For the record, incidentally, Miao-Yin isn’t my cat — she’s Chris’. Those of you who know Chris have probably now done the double take I did when he asked to bring in a cat. I was surprised to say the least — I never pegged Chris as a cat person. Maybe a boa constrictor person, but not a cat person.

Needless to say, I’m quite happy about having a cat. It’s been a while since I’ve lived with one. (When you’ve grown up with cats, you really miss them when you don’t have them.) Miao-Yin’s fairly old — 8 years, so her idea of entertainment is watching Chris trying to entertain her. Actually, I can see the humour in that myself. He tries hard, I’ll give him that, but getting an older cat to do anything is about as useful as flashlight in the middle of the midday desert. He’ll learn eventually.

Miao-Yin is a black and white domestic shorthair (which means, of course, that she sheds about a pound of fur a day — Chris has taken to vigorously brushing her every day). In many ways, she resembles my first cat, Sylvester, who died in 1993. I didn’t really realize how much I missed Sylvester until Miao-Yin moved in. She’s definitely not the same cat (Miao-Yin is MUCH more laid back than Sylvester was at 8 years of age), but the memories still come back. I suppose this will be good therapy for loss never truly accepted. 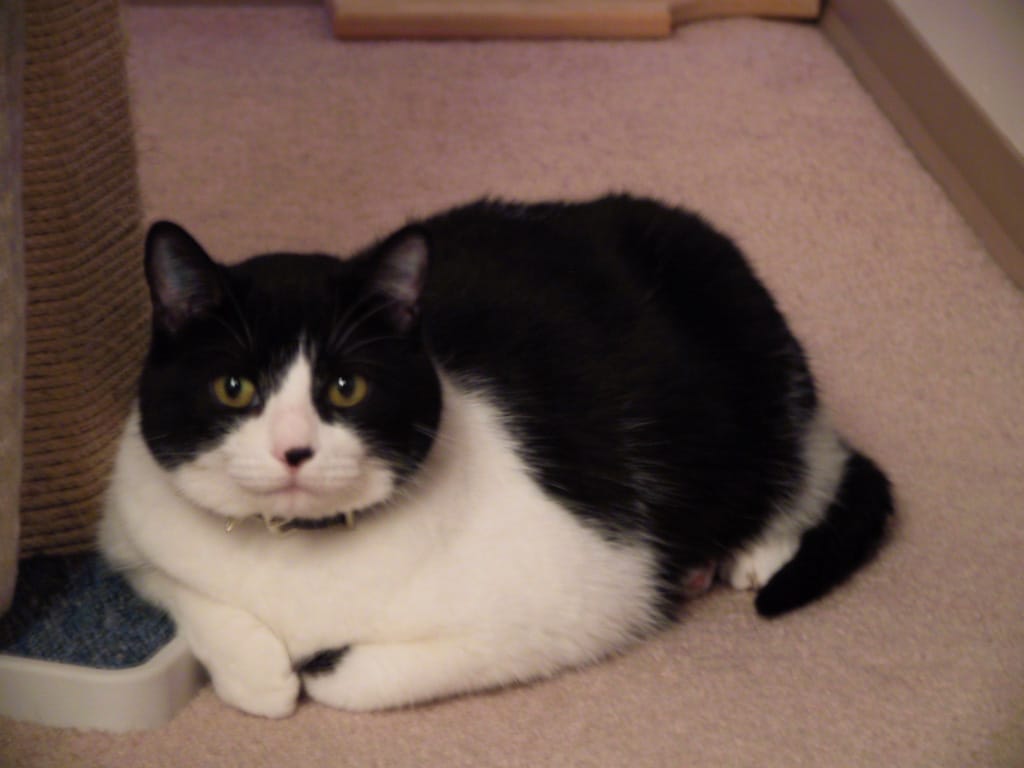 Actually, it’s good therapy in general. It’s been proven (though for the life of me, I can’t remember by whom or where that study is) that even just staring at a sleeping cat reduces stress. Miao-Yin sleeps a lot. I don’t think I’ve been this relaxed in a long time...

There is only one itty bitty problem with having a cat. It’s a no-no in our lease. Dunno what the punishment is, but if it’s like people I knew back in Vancouver, we could face eviction. But I’m not too worried — Miao-Yin’s pretty quiet, doesn’t smell, and doesn’t try to run out the door when we open it. Chris’ argument is that the building is supposed to be smoke-free, yet we smell cigarette (and marijuana) smoke all the time. Dunno if that argument would fly, but should it ever come about, we’ll give it a whirl. Frankly, I don’t see the problem with cat anyway — she’s litter trained, and doesn’t even claw the furniture (which would probably make it look better, admittedly).

I suppose it could be worse, though — Chris could have adopted a pot-belly pig.