Today was my day off. It didn’t start that way — I was figuring on getting a lot of work in, but as I went out to scout for lunch, I decided that the day was nice enough that I would take a little walk. My logic says that if I take today off, I can work my keister off for the next 36 hours and still get the job done and get a good night’s sleep.

In theory, at least.

My goal was the Cincinnati Museum Center. It sounded like a really neat place to check out, and it was about the only thing in walking distance that I wanted to see.

I walked up to 9th Street before heading west. Along the way, I passed examples of architecture from just about every period since the mid-to-late 1800s. Gerry would love this city.

The weather was threatening rain, amidst bursts of sunshine. The forecast was for thunderstorms, but I never heard even so much as a slight rumble. Heck, it barely rained in the entire time I was walking about. Which was good, because I had neither an umbrella or a raincoat. Luckily, I didn’t have to go anywhere where I would be horribly out of place showing up soaked.

According to the maps I’d read, all I had to do was cross I-75 on 9th Street, turn onto Gest Road, and walk up to Western Road. Unfortunately, maps seldom match reality. For starters, 9th Street doesn’t actually cross I-75 — 8th Street does. Although 8th Street doesn’t actually connect with the road that crosses I-75. Doesn’t make sense, does it? Well, considering the city has no movie theatres downtown and no stores open past 9pm (the Subway closes at 5pm on weekends!), it fits the pattern.

When you get to the other side of the I-75, you’ll find that Gest doesn’t actually intersect with the road you’re walking on. It’s pseudo-parallel. And Western? I don’t think it meets Gest, either ... although I could have just missed it without realizing.

You can see the Cincinnati Museum Center even before you’ve reached the other side of the bridge. It’s that big. It took me about ten minutes to get there from the bridge, and when I got there, I realized that I had another five minutes of having to walk around so I could actually get in. (I came down towards the side, which has a road that goes under the parking lot.)

The Cincinnati Museum Center is also known as Cincinnati Union Station. It was built in 1931 to handle the massive passenger rail traffic that used to run through the city. The station was huge. Its centre is a huge quarter sphere, with the flat side facing the front. The curved portion forms the massive rotunda of the complex. It’s a very dramatic art deco style. Gerry would love this building. So would Stuart, I think.

I like the art deco style. I’d even go so far as to say I’m an art deco revivalist. Maybe it’s because I think the style is elegant, maybe it’s because it’s not concrete. Sometimes I think I long for the era that spawned art deco — the days when rail travel was king, when technology was the newest radio.

Then again, I wouldn’t be able to write these logs as easily...

Actually, there’s a fifth exhibit — the building itself. If you go on a weekend, you can get a free tour of Cincinnati Union Station — when it was railway station. They take you through the various sections that are still in the semi-original state. I caught a part of it when I was waiting in line for the OmnIMAX movie. More on that later.

After purchasing my ticket, I went into the Cincinnati Museum. I figured that I could get through that before the movie at 4:00. The two wings used to be where vehicular traffic came through. It was a place for taxis and "motor coaches" (buses) to drop people off and pick people up. They arrived at the north wing (now the Natural History wing), drove under the main structure and picked people up on the south wing (now the Cincinnati Museum exhibit). The driveways are still visible, although now covered in grass.

The first thing you notice when entering the Cincinnati Museum is a massive model of 1940s downtown Cincinnati. Some of the buildings are familiar — they still stand today. But many are gone, replaced by more modern (although not necessarily more attractive) buildings. One thing that’s very noticeable is the streetcars (taken out in the 1950s), and the railyard and warehousing district on the waterfront. Today, there are no rails down there, and the only buildings (aside from the highways) are Cinergy Field (home of the Cincinnati Reds) and a new stadium, currently under construction (the future home of the Cincinnati Reds).

I spent about 15 minutes at the model, going through the interactive video, learning more about the city keeping my prisoner. It grew from the copious river traffic that flowed up and down the Ohio River. River travel was so important that the river boat captains wielded strong power over many decisions facing early Cincinnati.

One of those decision was to build a bridge to neighbouring Newport, Kentucky. The captains didn’t like that idea — it would hinder their ability to monopolize freight and passenger traffic. But eventually it was built, although Cincinnati took three more years than its neighbour to grant permission. (Their excuse was potential loss of Cincinnati jobs and an increase in runaway slaves.)

From there, I walked through a rather large exhibit about Cincinnati’s wartime efforts. They seem really proud of that. A little too proud, if you ask me. Of course, it might just be part of the Memorial Day festivities (there were vets all over the place).

Then it was into ancient Cincinnati, starting from the arrival of Native Americans. One thing I learned early on was that Cincinnati, the order of officers for whom the city obtained its name, comes from Cincinnatus. Cincinnatus was a Roman general, who came from commoner stock. The officers of the Revolutionary War thought it was an appropriate name to give themselves ("Cincinnati" is Latin plural for "Cincinnatus"). So I guess in theory, a person from Cincinnati is a Cincinnatus. Hmm, I wonder...

The exhibit was really quite fascinating. They covered the period of western encroachment into Ohio, from the first explorers, to the founding of Losantiville, the founding of Fort Washington, the Miami Purchase (don’t ask me what that was — the Americans seem obsessed with "purchases", and the rising of the modern city that I can’t seem to escape.

One of the neater parts of the exhibit was a 3/4 scale model of a steamboat, complete with part of original downtown Cincinnati. The exhibit stopped around the turn of the 20th century.

By that time, I thought I should head up, so I wouldn’t miss the movie. I was about 40 minutes early, so I just camped out around the door. Soon, the tour of Cincinnati Union Station came by. At first, I didn’t know what it was, but I was offered to join. So I did.

The first stop (for me, and also the last) was at the Amtrak station. Yes, there is an actual operating Amtrak station in this museum. Apparently, the rail travel still has to go through here. Kinda neat, eh?

Once upon a time, it used to be the Men’s Waiting Room. (There was also a Women’s Waiting Room.) It featured a lounge, showers (baths for women), smoking room — everything you needed to freshen up (or wait) for your train. Today, the women’s room is gone — it’s now storage, the showers have been taken out and the door removed, and the decor is plastic overlay instead of wood. But it still features the original flooring and art deco lights.

When we exited the room, the line-up for the movie had grown considerably. I opted to not follow the rest, as I wanted a good seat (this is crucial in an IMAX film).

The movie was "Amazon", and is perhaps one of the better IMAX movies I’ve seen. It tells the story of how two completely different civilizations (Western, and of the many that live in and around the Amazon basin) look to the Amazon with the same purpose in mind — saving lives. It didn’t preach heavily, but it didn’t really have to — the need to preserve the Amazon was quite clear. It was the first IMAX movie I’ve seen that made me queasy. Of course, that might have been due to lack of food.

After lunch, I caved in a bought a disposable camera. I wanted a pictures of the building — it’s too nice not to take pictures. Besides, I want to scan them and put them up for all to see.

Afterwards, I went through the Natural History wing. Not nearly as interesting as the Cincinnati Museum, but then again, I knew most of this. They had a few things that I didn’t expect to see — a mock-up of a cave (similar to Mammoth Cave, about three hours from here), and a mock-up of a glacier (which according to the museum, stopped just short of here during the last ice age).

The animals that lived here during that time were fascinating. I had never seen a skeleton, let alone a recreation, of a giant beaver. About three times the size of a normal beaver, this beastie could probably have taken down entire trees with a single bite. Big, sharp, pointy teeth.

I left around 5:45, heading back towards downtown. This time I went down Ezzard Charles Drive to Central Parkway, before heading south. I went all the way down to 3rd Street, where I walked over to the John A. Roebling bridge. (One of the weird conditions about building the bridge was that it was not allowed to be in line with any existing Cincinnati streets).

I walked towards the bridge until I got to a staircase that allowed me to get down to the Ohio River. From there, I got a good enough angle to take pictures of the bridge. I returned to the bridge to take a picture from its deck. 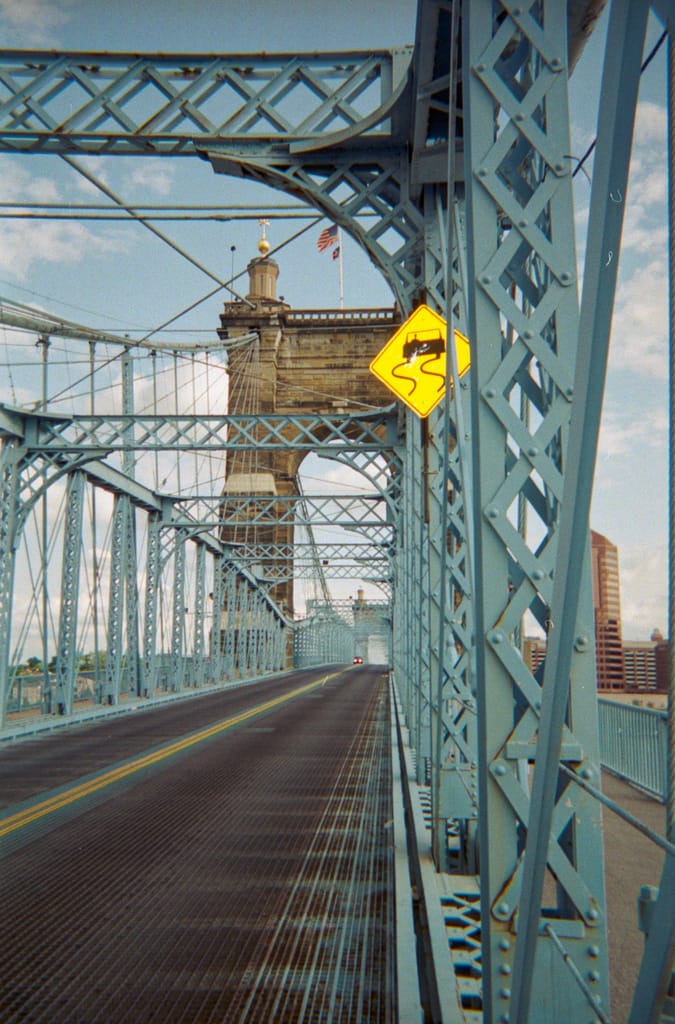 Returning to Fountain Square, I partook in a late dinner at the Rock Bottom Brewery again. I was relieved to finally get off my feet — I’d been walking for hours, and was quite tired at that point.

Then it was back to my room, and back to work. But at least I got part of a day off.