Another day, another hotel. Owing to some strange reason, there seem to be a lot of people coming to Cincinnati. Can’t really figure out why.

The Omni was completely booked for today when my room was booked on Tuesday. So I moved the next block over to the Westin. Larger room, better bed. Lousier TV selection, though. Oh well, I guess there are trade offs...

I’m definitely here for the long run. Probably won’t be escaping this place until Wednesday at the earliest. We’ve got problems that really have no explanation. Rather annoying, if you ask me. Today was about as effective as Wednesday and Thursday. This weekend is all mine, though. I’m going to rebuild parts of the site that the contractors did a number on. Don’t get me wrong, I don’t blame them — completely, anyway — they did what they had to do. Unfortunately, they aren’t the best coders in the world when it comes to HTML.

My task this weekend is to correct all the mistakes. Not just theirs, but ours. We (Critical Mass) sent a few files that had a few discrepancies in style. Not a good thing. So I’m going to spend a lot of time going through every file in the site. There’s a few, but luckily, not a lot. If I had to do this for, say, the Mercedes Benz site, I’d be spending the better part of a month doing that.

After work, I took the time to wander through part of downtown Cincinnati. It’s an interesting city, if only for its idiosyncracities. Its architecture is ... well ... interesting. (Seeing as the city’s "interesting", I guess that goes hand-in-hand.) The buildings in downtown Cincinnati have more variance in styles than any city I’ve lived in. This is probably because Cincinnati’s been around a while, and gone through a lot of changes. 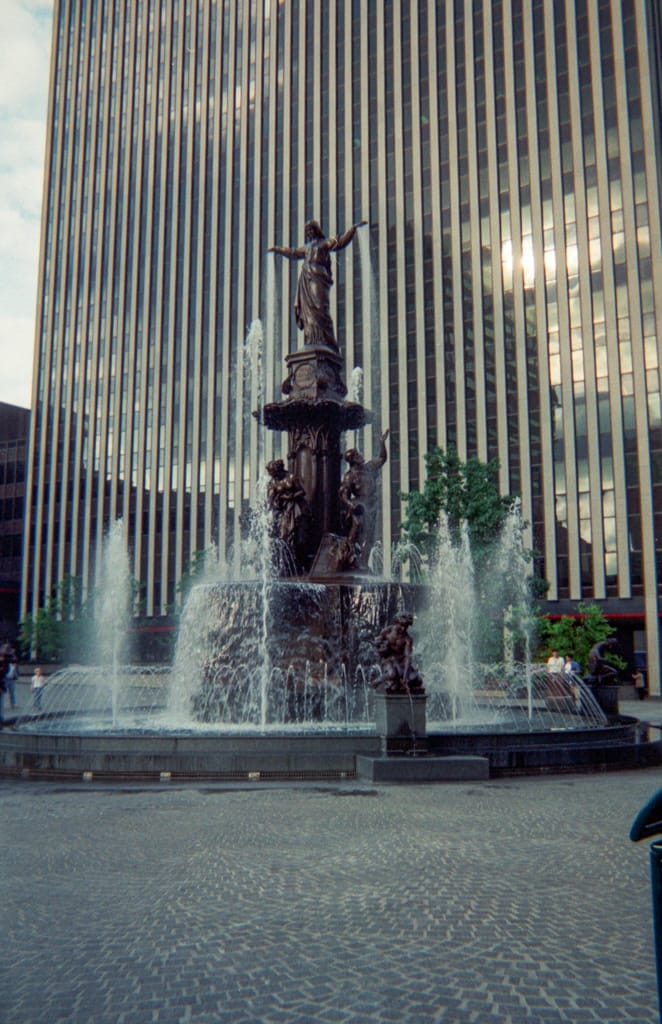 The town of Losantisville was founded in 1788 on the shores of the Ohio River. Two years later, Northwest Territory Commander General Arthur St. Clair renamed the town Cincinnati, in honour of the Society of Cincinnati, an officers’ organization from the Revolutionary War.

Cincinnati’s location is the nexus of Ohio, Indiana, and Kentucky. This made it a central location for commerce, which naturally attracted people. The mid-1800s saw Cincinnati’s population grow by 40 percent as a flood newcomers, mostly German immigrants. Steamboat trade and the explosion of the pork-packing industry led to Cincinnati’s role as the "Queen City of the West". For a time, it was the nation’s sixth largest city and third-largest manufacturing centre.

Because of Cincinnati’s past, it has a very interesting present ... at least from an architectural perspective. Most of the buildings downtown are either modern (built within the past 20 years), or from the 1920s to 1940s. There are a few edifices from the 50s, 60s, and 70s — they’re not too hard to spot. (Although the Federal Reserve, built in 1972, is quite nice.) Old buildings are well preserved, and easy to find.

Not easy to find are Cincinnati’s mistakes, and they’ve made a couple biggies. One of the more interesting ones is Cincinnati’s attempt at a subway system. The City made the attempt, starting in the 1920s using leftovers from a canal system. A large portion of the system was completed before the Depression brought the project to a screeching halt. Lack of funds and a general trend towards automobile traffic eventually led the subway into abandonment. The tunnels are used for storage, the half-built stations boarded up. Today, hardly anything exists.

Tomorrow, I intend to check out the Cincinnati Museum, an old art deco railway station converted into a museum. But that’s just part of the day — the rest will be work.