The Old Man was still cursing the sink the following morning. By the time Allison and I left for Waterloo, the plumber had arrived to solve the problem once and for all. (It would take an additional two hours, and several holes drilled in the wall to finally eradicate the clog.)

The drive up to Waterloo was very pleasant — it was a beautiful day. I wanted to show Allison where I went to school. The memories were flooding back even before I turned onto Highway 86. By the time I turned onto Ring Road, I was getting some serious deja vu.

But the campus seemed foreign. The students looked much younger (did I ever look that young?), more naive. The university seemed no different than I remembered, with the exception of modifications to South Campus Hall.

After a quick driving tour of the campus, we started the walking tour. This took us from South Campus Hall, between the science buildings, through Math and Computer (I was disappointed to see the Red Room is no longer visible), through Davis Center, back to the Campus Centre (aka the Student Life Centre), over to Needless Hell (aka Needles Hall), through Hagey Hall, and then back to South Campus Hall. 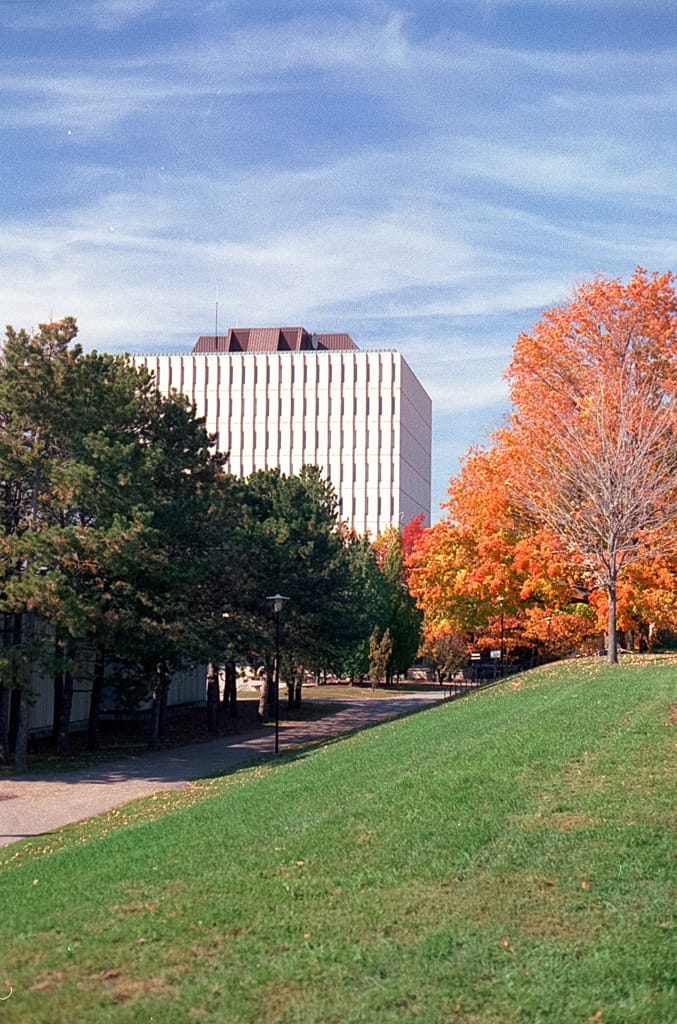 It felt strange walking around. I felt old. Allison commented that an entire (three-year) class had entered and graduated since I left. It’s a strange feeling, walking around, not seeing any familiar faces.

We left U(W), and drove around Uptown Waterloo, then Downtown Kitchener. We stopped for a while to take advantage of the Oktoberfest that was underway, picking up a pair of rather flavourless sausages.

It’s kind of ironic that in the five years I was in Waterloo (four years of which I was actually there for Oktoberfest), I only went ONCE to the festivities. (This was prior to my decision to start drinking alcohol, so needless to say I didn’t have that much fun.) Okay, that’s not the ironic part. Here’s the irony: As we headed back to the car, we were approached by a pair of (American?) tourists who were looking for more "fun" attractions. They asked this of a guy, who although spent four years in Waterloo during Oktoberfest, had not lived there for over three years. I directed them to the Hans Haas (aka the Information booth).

We headed up to Highway 7 on our trip out to Guelph. Within minutes, we were leaving Kitchener/Waterloo heading east. I had to admit, I almost didn’t want to leave — there are many memories for me there, and several people I would have liked to visit with. But there wasn’t time. There’s never enough time.

We drove around Guelph, during which I attempted to give Allison a rough tour of the area. I don’t know Guelph as well as my friends who went to Guelph (or spent a lot of time in the city), but I’d been there enough times that I knew the area.

Our first stop was at McCrae House. Well, after we drove around a bit before we found it (we took a wrong turn and ended up on the wrong side of the Speed River). McCrae House is the birthplace of John McCrae, author of "In Flanders Fields". We appeared 45 minutes late to go in the museum, unfortunately.

The tour continued up the sidestreets around McCrae House, where Allison oohed and aahed at the beauty of the leaf-covered streets and all the red brick houses. If it weren’t for the distance, the winters, and the dryness, I figure I could get Allison to move there.

Then it was past the ‘X’ House (the ‘X’s are still visible in the window, by the way) on Gordon St. before turning into the University of Guelph. The tour here was fair short, as our time was continuing be tight. We had to be in Acton by 6:30, and I wasn’t sure how long that would take.

Again, memories. Pangs of regret. The invisible tears of missed friends. They say that smell is the strongest sense that can evoke a memory — I often find that sight works just as well.

Returning to Highway 7, we continued on our way east. We stopped briefly on the edge of Guelph to get something to drink. I hopped into the convenience store, and purchased a ginger ale for Allison, and a Sprite for me. Well, it was going to be a Sprite until I spied my favourite drink ... Wink. You can’t get Wink in BC (mind you, you can’t get Cheezies in Ontario). I took the bottles and presented them to the clerk. I was $0.20 short. I was about to pull the Wink back, resigning myself to never having a visit with an old friend. The clerk, however, said I could pay him back later.

Oh. Okay. Sure. No problem.

We arrived in Acton shortly after 6:00, far too early to arrive at our destination. We were going to Jason and Steph’s place in north Acton (aka the middle of nowhere) to have dinner with our hosts and two more of my friends, Brian and Gill. Allison had met Brian and Gill before, but I couldn’t remember if she had met Jason or Steph before. My guess was "no".

Because we were early, I thought we’d check out downtown Acton. After laughing hysterically about the phrase "It’s worth the drive to Acton", we decided to visit the company that inspired that phrase — the Olde Hyde House.

I’ve been in a lot of stores, but I’ve never seen that much leather before. Ever. We wandered about the store, just to see what they had. Most of it was nice, and I debated off and on about picking out Allison’s birthday present (she’s always wanted a leather jacket). Nothing really struck me as "I gotta get her that!". (Sorry, honey, no jacket this year.)

We followed the directions Brian gave me and actually managed to find Chateau Fournier. It wasn’t long before (most of) the gang was assembled. Jason and Steph treated us to a steak dinner (Jason’s mom sacrificed her fingers for our meal, accidentally slicing off part of her index finger and thumb on a vicious man(woman)-eating slicer).

Then it was a game of croquano (crocano, krokano ... I don’t know how the heck you spell it), a game that you could almost call circular curling. If you play it with Brian, it’s "kill your opponent". Mind you, I’m not much different...

It was hard leaving. The memory thing, y’know. The last time I’d seen Jason was at his stag; for Steph, it was camping a couple of years ago. I didn’t know when I would see either Brian or Gill again. It’s a little sobering when you realise that you have to leave your friends again. You’d think that after a while, it would stop hurting.