Breakfast was huge. Omelettes, bacon, and potatoes. There was also champagne and orange juice (mixed in the stronger-than-usual 1:1 ratio) to wash it all down. When all was said and eaten, we were stuffed beyond belief.

The item of the day was Algonquin Park. Huntsville is a short drive from the massive greenspace, and Allison and I wanted to see it. I’d never been to Algonquin before (Allison was shocked that I’d not gone before with friends or family, though that wasn’t due to lack of interest), and was curious to see what it was like. Allison was itching to see the fall colours (which really don’t exist here in BC).

The day was warm, so we dressed comfortably. We passed by Huntsville and in just over a half-hour, were entering the south-western entrance to the park. Algonquin Park is huge — 7,725 square kilometres. Not nearly as large as Wood Buffalo National Park (weighing in at a hefty 44,807 square kilometres), but larger than Prince Albert National Park (3,875 sq. km) and Banff (Bamf!) National Park (6,641 sq. km). We had missed the best time to go through the park (the colour peaked probably a week or two earlier), but it was still magnificent.

After purchasing a day pass from the main gate, we headed for our first stop: Hardwood Trail. This was the shortest one in the park, and was described as "moderate". We took this to mean "relatively not too bad". At only 0.7 kilometres, it didn’t sound too bad.

In BC, they make trails easy to follow, and will quite frequently build raised platforms and walkways to prevent the trampling and compacting of the ground. In Ontario, they tack little blue circles to trees along the way.

By the time we reached the top of a hill (which gave us a spectacular view over Smoke Lake), we were tired. A lot of it had been crawling up and down hills, carefully walking so you didn’t plant your foot in a mud pit, and keeping an eye out for rogue tree roots. We passed on any more trails for the day.

We headed further into the park, stopping at the Algonquin Museum about halfway through the park. This gave us an opportunity to view some of the Group of Seven paintings the museum had.

Not far past the museum (still heading east), we realised that we had gone a bit too far, and turned around to head back. Along the way, we stopped at Canoe Lake, site of Tom Thompson’s tragic death in 1917. The only indication of the lake’s notoriety was a bronze and blue sign erected near the gift shop and restaurant. I think Allison and I were the only ones who read it.

Following our visit to Canoe Lake, we went into Huntsville, in search of something light to eat. We weren’t interested in anything heavy — we were still reeling from the previous night’s dinner (oh, if we only knew what we were in for). But Ontario is not exactly known for light fare, and certainly not more northern Ontario.

Downtown Huntsville is quite picturesque. It’s hard to tell if what we saw was genuine, or a carefully constructed charade for the tourists. We drove up the main strip, turned around and headed back (passing my mom and sister in the process) and headed back toward the cottage. We stopped at the Harvey’s along the way to indulge in a salad.

There were people all over the place when we arrived back at the cottage. As of the previous day, there were 10 people: Cathy, Craig, Dave, Steve, Kathy, Madison (the baby), my parents, Allison, and myself. We now had at least four more (in all honesty, I lost count). So much for a small, cozy Thanksgiving dinner. 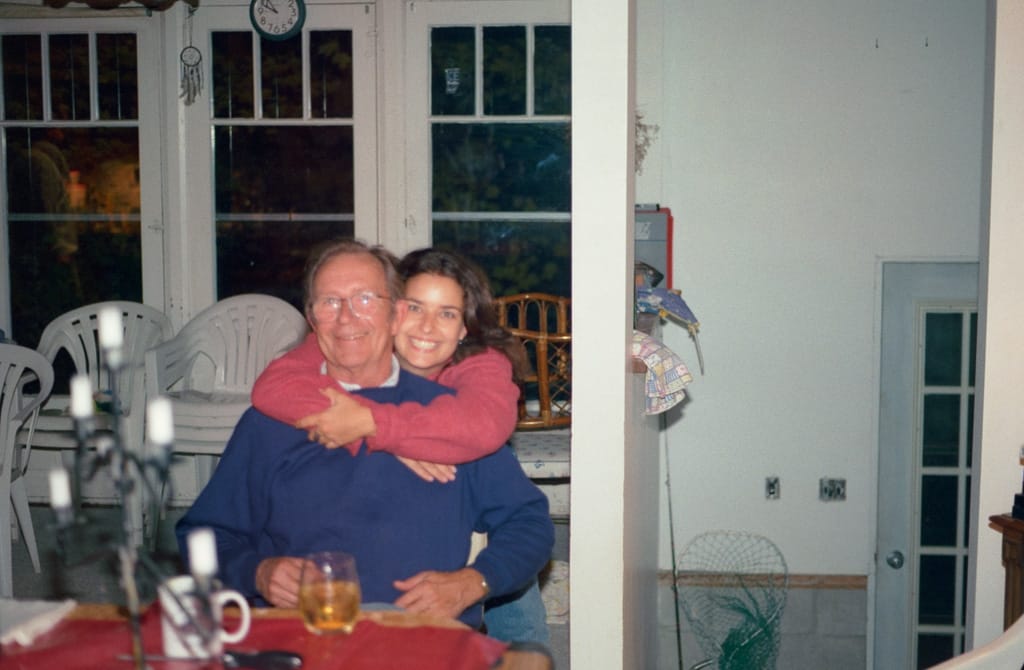 Dave had gone overboard with dinner. The turkey was stuffed with apple/raisin/sauage stuffing, there was a ham coated in pineapple/brown sugar glaze (it apparently did a number of the pan), beans that were seemingly cooked in butter (as opposed to water), carrots (the tamest of the items), and mashed potatoes.

No comments about the potatoes, you say? That’s because it takes a bit to explain them. Take your ordinary potato. Cook a few and mash them with cream and butter. Lots of it. The potatoes should be ultra-creamy. Mix in bacon bits. Real ones. Refrigerate over night. The next morning, scoop out potatoes with an ice cream scoop. Roll the potatoes in flour, then in beaten eggs, then in breading. Deep-fry until the breading is golden brown. Heat in the oven.

I almost wished I hadn’t learned how those were made. There were sooooo good, but I can never eat them again.

After dinner, we sat around and talked. Craig and Steve set a fire in the back yard. This doesn’t sound like a bad thing, until you realise what they were burning: Three mattresses, at least one box spring, several table legs (and possibly the tables), and about 1,000 square feet of carpet.

And this was a small fire. Their other fires have been massive blazes that have actually frightened them. (You’d think they’d learn...) Although I don’t have hard figures, these are some of the other things these people have burned:

The neighbours don’t like the cottage group too much.