We awoke to three deafening pounds on the bedroom door. Cathy had arrived at the Sowrey homestead, and wasn’t going to wait for her poor brother (and future sister-in-law) to adjust to the time change. She wanted to start up to the cottage, and she wasn’t keen on waiting.

The cottage? Cathy’s significant other (more than a boyfriend, but not quite a husband) owns a cottage just outside of Huntsville. (Huntsville, for those of you without a map, is about 250 kms north of Toronto.) Huntsville’s claim to fame, aside from being a nice little town, is bringing Shania Twain to the world. She got her start at the Deerhurst Resort, which sits on the eastern edge of town.

Allison and I weren’t off and running with the bulls that morning, it took us a while to get going. There was a reason for this, of course — we needed to make a phone call. What’s so special about that? Well, for one thing, it was to British Columbia, three hours behind Ontario. For another, it would settle our problem with finding a new apartment.

Finally sick to death of the apartment we’re currently in (lots of noise, endless renovation, and I’m getting tired of the commute), we started looking for a new place to live. Because of the way our lease is structured, we had to hand in our notice to vacate one month and one day before our last day — September 30. This was long before we had a place settled.

We had searched high and low through Kitsilano and the West End to find a place. We found a few promising ones, but nothing definite. We were getting a bit uptight about finding an apartment in time before we left for Ontario. Then, on the Tuesday before, we went to see a place in the West End. It sounded promising: Two bedrooms, balcony, view, and a dishwasher. The dishwasher was a big thing for us — we’re sick of having our counter space sucked up with a dish rack.

When we arrived, there were several people directly on our heels. It was only because I thought we should get there early that we got there first. Allison whispered in my ear "we’ll take it" after only barely stepping into the apartment. But we had to wait for the manager to show the apartment to two more groups.

The next group bribed her $100 to give the place to them over us. The second group offered $250 more per month. (There were two more groups from Toronto who both offered $350 more than the advertised rent.) I began to understand why prices out here were so out of whack. (In retrospect, Toronto has caught up in the Rent Race as of late.)

We were told that we would find out Thursday morning if we got the apartment. When Thursday morning came, Allison (who accepted the call) discovered that the owner of the apartment (apparently it’s a condo) was concerned that Allison is self-employed. We’d expected to run into this problem ... when we bought a house, not renting an apartment. Allison hastily faxed nearly every quasi-financial document that proved she was trustworthy.

The call Friday morning would tell us either A) we got it, or B) we’d be apartment hunting as soon as we got back. We were hoping it wasn’t B).

I dialled the management, and asked for Dana, the woman we had been dealing with. (Interesting fact: Almost every single building manager I’ve dealt with since I got here has been a woman — only one man.) Her response was: "Are you ready to sign the contract that says you’ll take me for two weeks of the year?"

This is Dana’s little joke — she thinks the view at our new apartment is great, and joked that she would like to stay there two weeks of the year when she’s retired. It’s harmless ... I hope.

So that brings me to a new point: Our new address information. You might want to jot this down...

[Information not available on the web. Sorry...]

Anyway, back to the story...

The whole famn damily (as my dad would say) was going to up to the cottage. Allison and I would pick up my sister, and my parents would drive up in the RoadTrek. We’d meet either in Huntsville, or at Weber’s (if we got there at the same time).

Following the simple directions, Allison and I arrived at my sister’s house. Yes, house. She owns a house with Craig (hence the more-than-boyfriend, not-quite-husband designation). It’s a nice place, it just needs a little bit of work to make it their own — they’ve only been there a couple of months.

And off we went. I drove for the first bit, about 80% of the trip. This took us north of Toronto, through Barrie and Orillia, and finally to Weber’s, home of the best burgers in Ontario (and possibly the world). As we blitzed north, we passed my parents, who then engaged in a game of "keep up with the children". We met for lunch.

Weber’s is a landmark in the Muskokas. Everyone travelling north of Orillia on Highway 11 knows about Weber’s. You can’t miss it. It’s the only hamburger joint with it’s own bridge across the highway (the bridge is the only privately-owned bridge (or walkway) across a highway in Canada — bought from the CN Tower in the early 80’s). They serve up to over 110,000 people in one month (up to over 6,000 in one day).

Yes, they’re that good. That’s why the bridge is there — to get the southbound traffic.

We arrived at the cottage around 3pm in the afternoon, and were promptly presented with with draught beers. They have a beer fridge, complete with taps in the front. The beer fridge did not last long, however, it was moved downstairs to make room for the pool table.

In turn, the power drill came out. Two holes were bored — one in the floor, the other in a post that supported the loft. They ran a clear plastic hose from the beer fridge in the basement, up through the floor, and into a beer tap that now occupied the hole in the support post. Beer now flowed from the basement to the kitchen.

(Ever seen those beer commercials where a bunch of 20-somethings romp around in this mythical cottage lifestyle? I think we found the model cottage for those commercials.)

The cottage is two floors, with a loft. The main floor is the kitchen/living and dining area. There are no walls. Except for the ones around the bathroom (kind of a necessity). Downstairs are most of the beds, with walls separating most of the areas, and one room that holds Steve, Kathy, and their baby. The loft is accessed from the living area up a fairly steep ladder. There are numerous mattresses up there, capable of sleeping a large number of people. 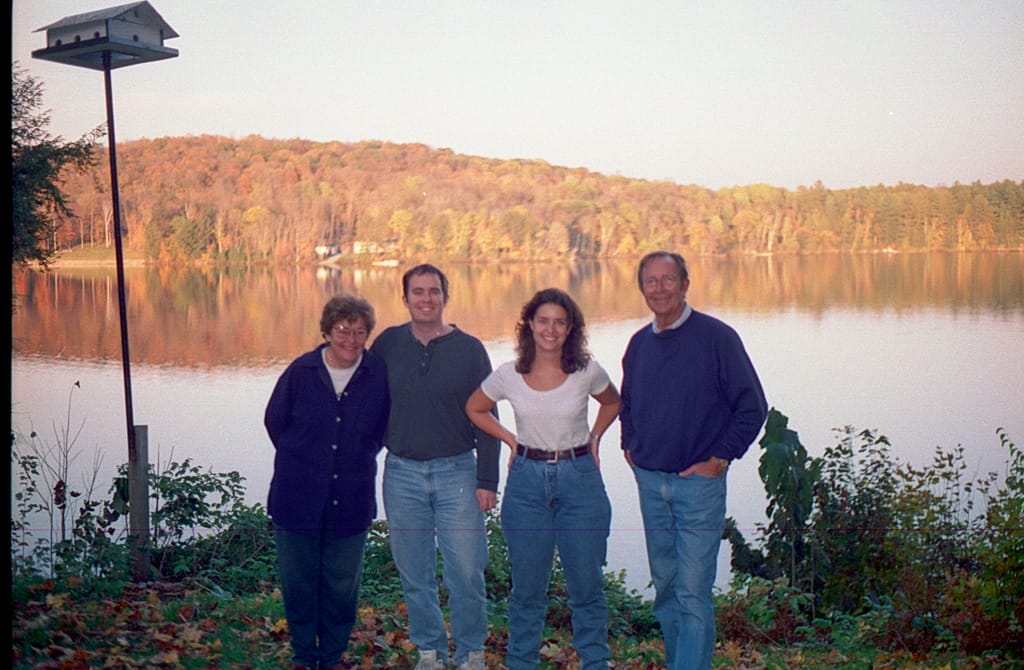 Dinner that evening was a roast — nothing horribly fancy, other than it was a roast. (This was a cottage — I was expecting hot dogs and hamburgers, maybe a steak.) It came with roasted potatoes and fresh vegetables. All courtesy of "Scarborough" Dave.

(There are two, actually three, Daves at this cottage. "Scarborough" Dave comes from, you guessed it, Scarborough. This is not to confuse him with "Huntsville" Dave, who lives just down the road. The third Dave is my dad. He doesn’t need a prefix for his name though, he’s just "Dave".)

Anyway, Scarborough Dave is a cook — used to own a restaurant. He loves cooking, or so it seems. (Cathy told us that they eat far too well at the cottage.) The meal was quite tasty, but nothing compared to what awaited us the following night.