Today was also day from hell.

Aside from the fact that it was uncharacteristically hot and muggy, it was also the second-to-last day to complete the work I had for the H-Spline group prior to their trip to Siggraph in Orlando. In other words, I hit the floor running at 07:05 this morning, and I haven’t stopped since. I am in a wee bit of pain, and I’m really tired.

Upon getting to work, I quickly started writing the remaining parts of the documentation (beta release, we’re still a ways from finishing the thing) before I was brought before the Almighty Dave (Forsey, the brain behind the H-Splines). Then I shifted work to working on the copy for the Rodin (the name of our 3D Studio MAX plugin) brochure.

Just before 16:00, I bolted out the front door, trying to get to the Skytrain as quickly as possible. Allison had told me not to be any later than 16:50, when she was going to pick me up. I don’t know what it was that she had in mind, but whatever it was, I expected it to be interesting, to say the least.

I got home, doused myself with cold water (in a vain attempt to cool myself off enough to put on some nicer (and inherently warmer) clothes. I shaved, dressed, and bolted downstairs to meet Allison.

Then she took me to North Vancouver, and still not telling me where we were going, pulled into the BC Rail passenger parking lot. This was my present. No, not the parking lot ... and evening on the Pacific Starlight.

Several years ago, BC Rail started purchasing vintage railcars (I think the most recently built car was from the 50’s), and overhauled them to function as dining cars. Then they pack a few hundred people on, and take you for a ride up the line to Porteau Cove. The train reverses direction, and goes back down the line.

After a quick sprint to a Shell station to get some money, we boarded the train and took our seats. Allison impressed me highly by firmly believing that if your going to spend money, spend it well — she got the best seats on the train.

The train departed from the station about 18:30, and slowly moved westward through BC Rail’s yard. Allison thought it a little strange that the yard was considered one of the features of the trip, but for rail buffs (such as I consider myself), this is as good a feature as any.

We passed by the building that houses the Royal Hudson and the 3716, which are two steam engines BC Rail uses for hauling passengers and tourists to Squamish and back. It’s a trip I’d like to take some day. (I have a thing for steam trains, ever since riding my first as a little kid ... the CN 6060, which ran between Toronto and Niagara Falls. It now rests at the Alberta Pioneer Railway in Edmonton.)

We passed under the Lions Gate Bridge, and entered West Vancouver. Many people on the train probably thought it very strange that so many homes (especially expensive ones — West Vancouver is noted for its very high property prices) boardered on the rails. Apparently, when the PGR was bought up by BC Rail, they had let the line go into disrepair. During that time, many homeowners were told (usually by real estate agents) that they could use the land on the rails. In the mid-70’s, however, BC Rail employees came along and told them otherwise. Many were not pleased.

Today, that’s an entirely different issue. The number of people who waved at us as we passed was very surprising ... I had to actually wonder what these people did with their time — waiting for trains to pass by?

We wound our way along the line towards Horseshoe Bay, moving at a relatively slow pace. There were three reasons for which I thought of for the slow speed, but only two seem really appropriate: reducing the motion of the cars so people could eat, and so people can see the view.

And what a view. Wow. I mean that. Wow. It was amazing. It was such a relaxing trip, that I almost didn’t notice the lack of foot room under the table.

We sat at a table with a slightly older couple, Ian and Yvonne, who were celebrating their first wedding anniversary together. We talked a little (mostly on the way back) about everything, including the trip Allison and I are going on tomorrow.

The dinner was absolutely sumptuous. Allison had conned me earlier in the month into telling her what I would like to eat. In fact, the entire present was one big charade (I have to give Allison full credit for being completely devious), but I haven’t the least bit of a grudge for it. We both had a salmon dinner, which to date is the best fish I have ever had in my life.

When we arrived at Porteau Cove, we found (much to our surprise) that the jazz band that had sent us off in North Vancouver had beaten us there (which in all reality wasn’t that hard — the train moved that slow) and was still playing when we arrived. Very classy, non? 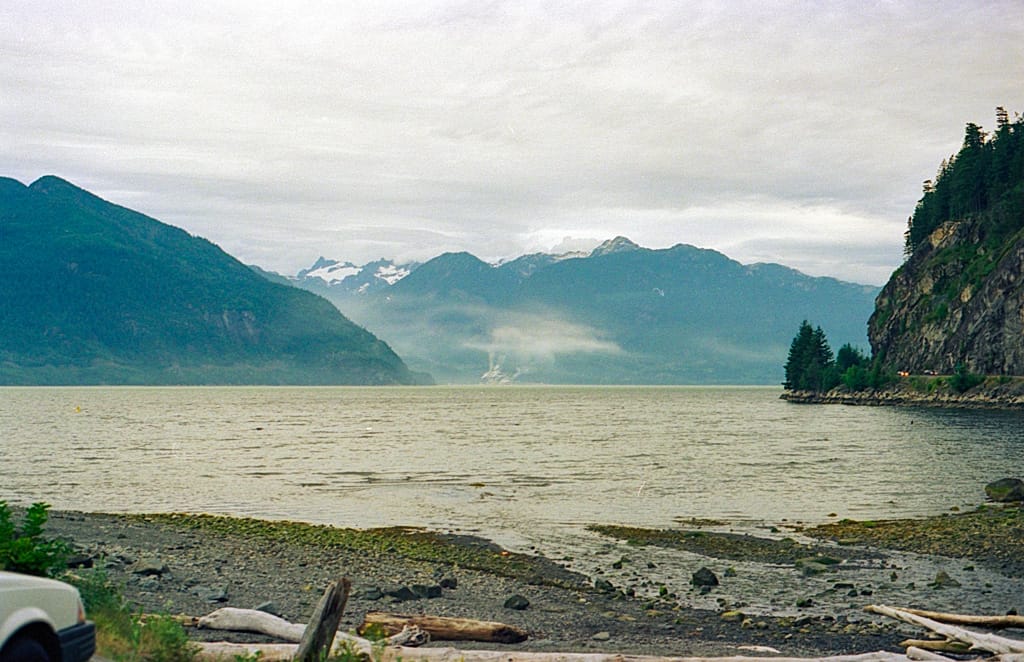 We had a 45 minute layover (for us to stretch our legs, and so the nicotine addicts could get their fix), so we wandered about a bit, looked at Porteau Cove Provincial Park (it’s a lot smaller than it sounds), and then wandered back to the train. 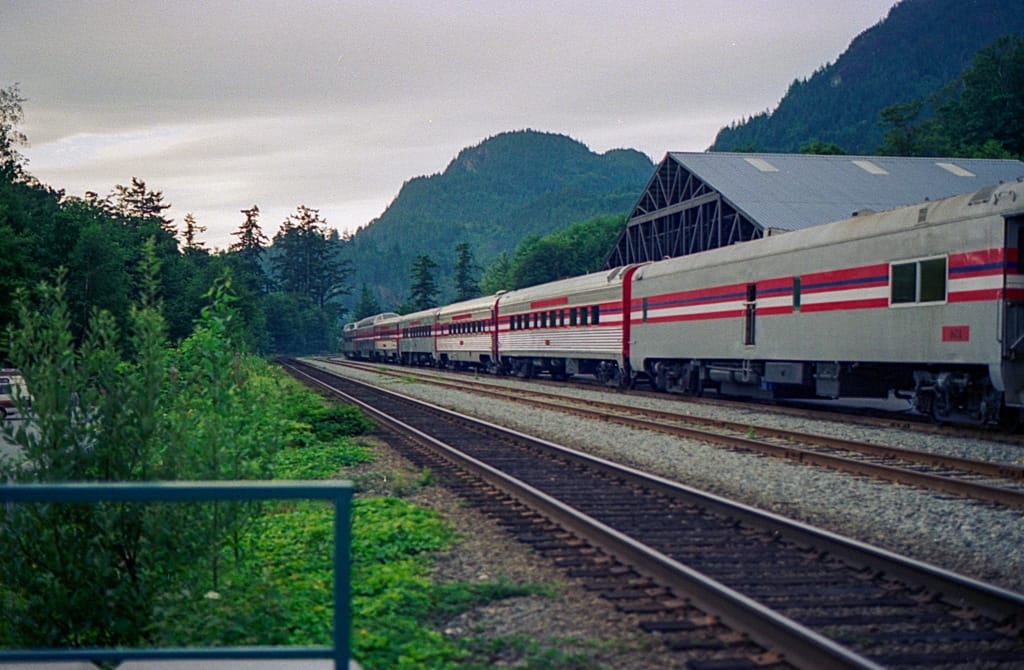 The trip back has us facing backwards (passengers are guaranteed to face forward during one half of the trip), but it was no less spectacular. We had dessert, which was a chocolate mousse-like (albeit much denser) quasi-cake, the name of which I completely forget.

Upon arrival back in North Vancouver, we returned to Allison’s car, and headed for home to finish packing and get ready to leave on our next great journey.