Observer’s Log: Traveldate 890703.12
Day 4
We are about to leave the Zagorsk religious complex for a restaurant (I hope!) and then back to Moscow to GUM and then dinner (fish guaranteed) and then to the train. No-one will sleep tonight, partly because almost everyone is buying alcohol. If you haven’t already noticed, you have to be blind.

I will say one thing for Moscow weather ... it sucks. The only time we saw the sun while we were in Moscow was when the clouds parted very briefly while I was taking a picture of one of the churches in the Kremlin. Could it be that someone (or something) wanted the picture to be, heavenly? It was raining again that morning, but like the day before, not very heavily. At least that morning Jason got up on time. We had the same routine for breakfast, but we had to eat quickly, as today was going to be busy and we had no time to waste.

We rushed back to our rooms and grabbed our luggage, which we packed the night before, and took it to one of four courtesy rooms, where it would wait for us until we got back. The rooms were needed, we were lucky to get the ones we did! Then we hauled ourselves into the bus and headed for Zagorsk, about an hour to the north of Moscow.

This was when our walkmans came in handy. As I said, it was a crappy morning and there sure as hell wasn’t anything to take pictures of along the way. They don’t grow as much food as the could out there. If it hadn’t been for Stalin taking control of farms and centralizing them, the Soviet Union could be on par with North America, instead of being the Second World country it is.

When we arrived at the Zagorsk complex, it was still raining, only a little harder than in Moscow. We unloaded once more and took some time to look around. Then, after some pictures of the outer wall (yes, this too was a kind of kremlin), we went inside. 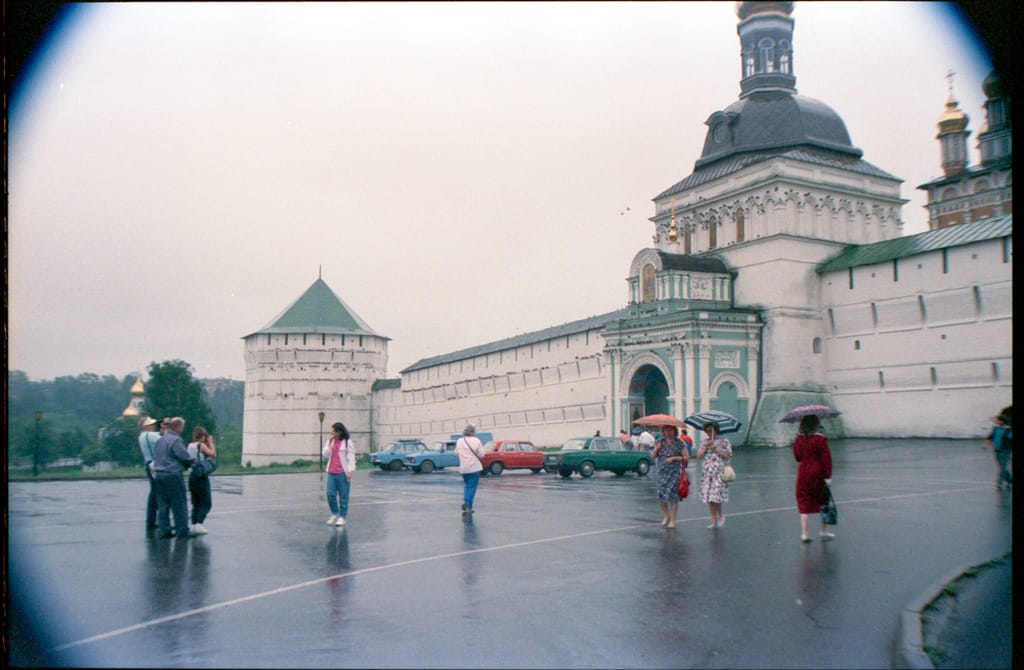 The churches there were all still fully functional, unlike those in the Kremlin in Moscow. The main courtyard was the hub of the whole complex, the parts that we saw anyway, and from it, you could access all the churches. Here we also found a fountain that poured out water, which I think the priests considered to be Holy. Konrad tried some, but nothing happened to him (at least, he didn’t seem to change his ways — if anything, he got worse).

We were then taken into a church that stood in front of the fountain. This was another Cathedral of the Assumption. This was just as impressive as the one in Moscow, although there were a few subtle differences, such as it was operational ... and packed! There were people everywhere, every one of them devoutly religious. It almost made me a believer. Perhaps the eeriest part of that tour was when they started to sing. In the small church, it seemed almost hypnotic. The sound seemed to come from every direction at once. 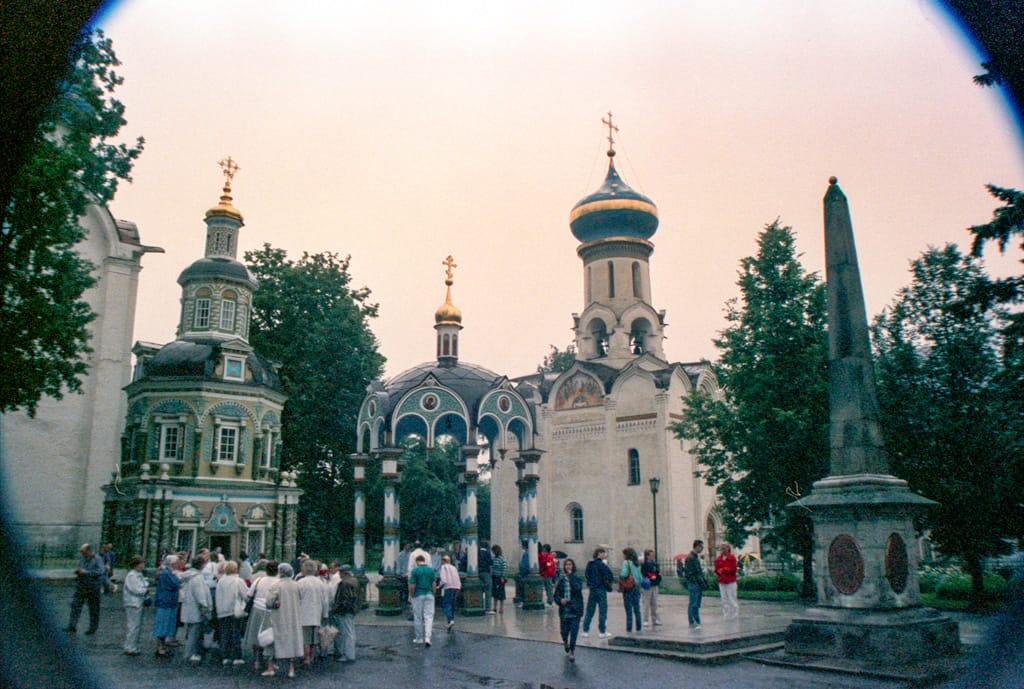 A few of us decided to make a quiet exit as we wanted to get outside, where it was cooler and we could get some fresh air. As we exited, we saw a woman standing at the door with a baby. The baby did not move at all. The woman looked like she was looking for help from the priests.

A small group of Pete, Derek, Toni and myself checked out another church, the oldest in Zagorsk. Although the outside was much simpler, the inside was very similar to the others we had already seen, except that most of the paintings had been blackened with soot from over the years. We regrouped back out in the courtyard and began to chat about what had occurred so far. Pete left for a moment to take pictures for a teacher back at our school (Pete and myself’s), Mr. Dunn. During that time, Derek began to crack dead baby jokes. Why? Because the woman was still at the door. Mind you, the baby wasn’t dead, it was just asleep.

We ran into Marina and she showed us a few other things in the monastery, including the former residence of the Romanov family. We also happened to see a monk that had a very familiar appearance. At first I couldn’t place it, but then it hit me ... Rasputin! Who knows? Maybe they didn’t kill him after all.

Before we returned to our buses, our guides and KB suggested that we check out the BS store first, as we might want to pick up something to drink during the train trip that night. The store was much smaller than the one in Moscow but it had a large alcohol section. There were only a handful of people who did not get booze (one of whom was me). That was KB’s first big mistake.

We hopped on the bus and headed over to a restaurant less than five minutes away. There we had an awesome lunch that was very reminiscent of the one we had the day before. Soup, beef and diddlydo do do do do do do do do ... ICE CREAM! After lunch we went outside and traded with the locals. It was now that I started into pins, and got rid of a lot of the gum that I brought with me. We also managed to teach the local children how to perform the North American obscenity known as "The Finger", only we showed them the forefinger instead of the third. About half an hour later, we were headed back towards Moscow.

As we had already eaten lunch, we went directly downtown from Zagorsk to Red Square. It was here that we moved as fast as we could. We got pictures of St. Basil’s Cathedral and Red Square the day before so the only thing we had left to look at was GUM, the state department store. That place was obscenely huge! For those of you who have been to the Eaton Centre in Toronto, just picture three Great Halls sidebyside.

Greg and Lisa V wanted to do some serious power shopping and Jason and I thought we would try and tag along. The key word is "try". As soon as we got in there, we found ourselves literally running just to keep up. We gave up after about five minutes and decided just to check around ourselves. After a while, we ran into Pete, Toni and Derek who were doing their own tour. It was then we found out that Toni doesn’t like heights. We found this out when Pete and Jason leaned over the rails to view the floor fifteen feet below. She panicked every time they leaned over.

We finally found the queues that we had been told about. Some stores were packed. The watch store was jammed and stock was very low. There was also a very long line full of people waiting to get into the store that sold, of all things, toilet paper, soap and perfumes. It was times like that I was glad to be a Westerner.

Soon, our half hour was up and we had to go back to our bus. We had an early dinner in store for us, we had to catch a train for Kiev that night. But our bus was a bit late leaving the downtown core as trading hit a frenzy for about ten minutes. We knew what as for dinner, no-one needed to tell us, so we weren’t in a rush. Fish was waiting as we had expected. But there was a little twist ... caviar! Before I had left, I had made a promise to try everything that was placed before me. I’m a fussy eater, which as George Carlin puts it, is a euphemism for "Big pain in the ass!" But it was a new country and I wanted to experience it.

I swear, rich people are demented. Caviar is disgusting. Very salty, mushy and extremely fishy. Fortunately, there was a lot of bread and water to wash the taste out. But other than that, dinner followed the pattern that we had started two nights before. The food, incidentally, finally got to someone that night. Toni left the dining room having not eaten a thing, and it concerned a few of us. Given, the food was pretty raunchy, but we had to eat something. We found her outside, not feeling up to snuff. Pete stayed with her and the rest of us just left her alone.

We collected our bags from the courtesy rooms and piled them outside, so the porters could put them in the lower compartments on the bus. The next thing on the bus was us. Then we took our last trip into Moscow. We got to the train station, but weren’t let off the bus. Our guides had to track down our tickets. So we sat around, wondering what the hell was going to happen that night. Little did we know ...